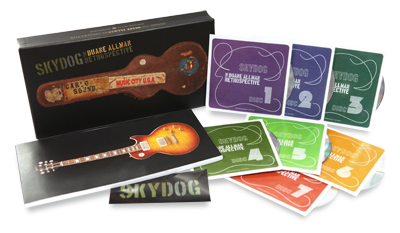 In the summer of 1971 I was 15, and Atlantic Records released on one of its subsidiary labels, Capricorn Records, The Allman Brothers Band at Fillmore East. In those days, you found out about records from Rolling Stone or Circus, or you picked up a record because the cover caught your eye, or you heard it on FM. I’d read Rolling Stone’s generally positive review of the group’s previous LP, Idlewild South, but it was the cover photo on their new record that sold me. The band’s gear was piled high in shipping containers against a wall outside, I assumed, the Fillmore, and the band was posed against the tools of their trade. I couldn’t imagine a more exciting life than touring the country to play music.

I picked up the record at a local store and put side 1 on the turntable. I was entranced from the first notes of Willie McTell’s “Statesboro Blues.” I’d heard slide guitar before, but something about Duane Allman’s tone and the way he sustained notes pulled me in. I was gripped by all four sides of the two-LP set. The Allmans played the blues in a way that seemed closer to the source and yet more sophisticated than other rock bands of the era, and their long improvisations never lost focus or purpose. I played the entire record through twice.

Duane Allman was the band’s leader, and as a young guitarist, I tried to copy his playing as much as a self-taught player with two years’ experience could. His combination of tone, feeling, and ideas was unique, and I told anyone who would listen that he was the best guitarist around, at least the equal of Jimi Hendrix and Eric Clapton. I picked up the first two Allman Brothers records as soon as I could, and set about committing them to memory.

When Duane died that October, less than four months after the release of Fillmore East, I felt as if I’d lost a close friend. His early death secured and enhanced his legend, and the fact that the band soldiered on to become even more successful ensured that he wouldn’t be forgotten. In addition, he’d appeared on Layla, by Eric Clapton’s band Derek and the Dominos, another beloved and successful record of the early ’70s. The title song became an unlikely hit in 1972 when it got heavy play on AM radio, and Allman’s intricate interplay with Clapton on slide brought him more fans.

Until I read about it in his obituary in Rolling Stone, I hadn’t realized that Duane had played on countless sessions before and during his time with the Allmans. He’d also recorded with his brother, the singer and keyboardist Gregg Allman, in the Allman Joys and Hourglass. I set about tracking down every session I could find. That task was made easier in 1973, when Rolling Stone published a cover story on the Allman Brothers that included a complete list of Duane’s session work. Prior to that, I’d had to rely on information included in articles about him, or lists on album covers. I was elated when, a couple of months after Duane’s death, I saw his name on the back of Boz Scaggs’s eponymous LP, recorded at Muscle Shoals.

Over the years, I’ve tracked down many of Duane’s sessions. Each is a gem, an affirmation of his versatility and his search for challenges that would help him stretch and improve as a player. I’ve long thought his session work deserved the kind of thorough documentation that Mosaic Records gives to great jazz musicians. Rounder Records comes close with Skydog: The Duane Allman Retrospective (Rounder 11661-9137-2). The seven-disc set reaches back to his first recording, with the Escorts in 1965, and closes with his last recordings with the Allman Brothers Band, in 1971.

I already owned many of the sessions included in Skydog, but it’s still staggering to hear Duane Allman’s session work in such a concentrated manner, and realize how much he achieved in the space of about three years, from his first session at Fame Studios in Muscle Shoals, Alabama, in late 1968, to his death in October 1971. Disc 1 outlines the story prior to his time at Fame, and while most Allman Brothers fans already know about his early years with Gregg, the Escorts recordings will probably be new to them. Duane’s journey from there through the Allman Joys, Hourglass, and the 31st of February help laid the foundation for his full flowering as a player during his sessions at Fame.

Duane’s exceptional abilities as a rhythm guitarist were already apparent with the Escorts, and his distinctive lead-guitar style was on display with Hourglass, especially in the B.B. King medley that first appeared on the posthumous Duane Allman: An Anthology (1972). Hourglass recorded that track and several others at Fame, and when Fame’s owner, Rick Hall, heard them, he hired Duane for sessions. Tony Glover quoted Hall in the liner notes to An Anthology: “‘he had to have his amplifier turned wide open,’ Hall said. ‘He’d have the phones on and couldn’t hear the strength coming out of the amp and it would be jumping off the table.” In Clarence Carter’s “Road of Love,” which leads off disc 2 of Skydog, the slide-guitar solo blasts out of the left channel, and the notes cut through and sustain.

“Road of Love” is the first Fame session sampled on Skydog, and it’s a good example of how much Duane could bring to a song. The solo is brief and gripping, and pulls you in without overwhelming the song or overshadowing the singer. His solo on his next session, Wilson Pickett’s version of “Hey Jude,” grabbed Jerry Wexler’s ear when Hall played it to him over the phone. Wexler picked up Duane’s contract from Hall based on that solo, and used him on countless sessions after that. Skydog includes selections by Pickett, Laura Lee, Spencer Wiggins, Arthur Conley, Aretha Franklin, King Curtis, and many others. Discs 2 and 3 compile Duane’s session work leading up to the Allman Brothers Band’s first album, four tracks of which close out disc 3.

Duane brought a lot to his session work. His rhythm guitar and fills on “Hey Jude” are as important to the song as his closing solo. He also gained a lot from playing with the understated, very soulful Muscle Shoals players, such as Barry Beckett and Roger Hawkins. Those guys defined “in the pocket,” and as a result he had a solid foundation on which to build his solos. In addition, at Fame, Duane had to keep his statements brief; as a result, even his long improvisations with the Allmans were focused and well structured, and built to a strong conclusion.

After the Allman Brothers’ first album, Duane continued to appear on sessions between tours, and discs 4, 5, and 6 include his work with Ronnie Hawkins, Lulu, Laura Nyro, “Sam the Sham” Samudio, and others. There are so many fine moments on these tracks that even close followers of the guitarist will be pleased to hear once again his fine Dobro work with Samudio and Hawkins, or the way his lead work lights up Laura Nyro’s “Beads of Sweat.” The tracks with Delaney & Bonnie & Friends are reminders of what a wonderful group that was, and Duane’s appearances on live tracks with them from a radio broadcast have a front-porch coziness that makes them especially valuable and enjoyable. The inclusion of a live guest shot Duane did with the Grateful Dead is also very welcome.

Skydog: The Duane Allman Retrospective is such an embarrassment of riches that it seems like carping to point out that a fairly generous portion of the set is probably already in the hands of hard-core fans. The lengthy workout on “You Don’t Love Me” that includes “Soul Serenade” is on the Allmans’ Dreams box, and the live tracks from Stoneybrook Gym are from a set the band released from its archives a few years back. On the other hand, it’s instructive to hear a live performance of “Blue Sky” immediately after the studio version, to hear how the band expanded on its ideas.

The boxed set is a beautiful package, with a velvet-lined interior reminiscent of the inside of a guitar case. Inside are a replica of one of Duane’s guitar picks, a bumper sticker, and a booklet with a nice shot of Duane’s Les Paul guitar on front and back. The booklet includes detailed session information and liner notes by Scott Schinder and Galadrielle Allman, Duane’s daughter. Each disc is in a laminated paper sleeve modeled on the envelopes that electric guitar strings are packaged in. The mastering is a bit hot, but when I pulled the volume down a quarter notch, the music gained space and perspective, and I found the sound to be quite enjoyable overall.

Genius is an overused term, but it’s not hard to be impressed by the volume of studio work Duane Allman did in so short a time, and by how consistently inspired his playing was. He brought the same conviction to dates with Spencer Wiggins or Ella Brown that he did to a session with Aretha Franklin. Skydog could function as a primer in Southern soul, but it also takes in country blues, jazz, and rock’n’roll. Even after more than 40 years of listening to him, I’m still moved by how much he gave to every note he played, and how determined he was to make each solo something new and exciting. The more than eight hours of music on Skydog: The Duane Allman Retrospective show why he is remembered and revered.