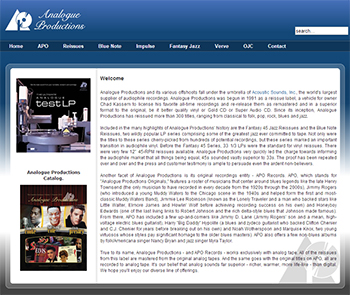 “We reinvest in keeping vinyl and the blues alive. That’s what we care about.”

Chad Kassem returned to those two passions several times in our phone conversation of a few weeks ago. Kassem owns Analogue Productions, which produces exquisitely remastered recordings on vinyl, hybrid SACD/CD, and, beginning recently, high-resolution downloads. The label’s subsidiary, APO Records, releases new music by blues artists Jimmy D. Laine, Weepin’ Willie, Henry Townsend, and many others. Kassem markets his products, as well as recordings from other labels, through his website, Acoustic Sounds.

As I was getting ready to write this piece, I tried to recall the first time I heard about Analogue Productions. It was probably in the late 1990s, when I picked up a copy of their pressing of You Get More Bounce with Curtis Counce! According to the company’s website, Chad Kassem established the label in 1991 as a way to reissue some of his favorite recordings in audiophile-quality sound.

Kassem was living in Salina, Kansas, a small city in the north central part of the state. He’d moved there in 1984 from Louisiana, to enter a halfway house to treat his addiction and substance abuse. In 1985, he began buying collectible LPs and reselling them from his two-bedroom apartment. That apartment-based business became Acoustic Sounds.

“I was there with vinyl when CDs were starting to take over, before all the Johnny-come-latelies,” Kassem told me. At that time, as LPs disappeared from store shelves and were replaced by CD longboxes, everyone in the music industry was predicting that the Compact Disc would kill the long-playing record. Nearly 30 years later, not only is the LP not dead, but CDs themselves are fading. “I trusted vinyl,” Kassem says, “but I didn’t foresee the death of the CD.”

When I bought You Get More Bounce from Curtis Counce!, Analogue Productions and the now-defunct Classic Records were reminding listeners that vinyl was still around and still vital by producing painstakingly remastered, all-analog pressings. Stan Ricker remastered You Get More Bounce, and when I replayed it again today I was struck by how open and deep the soundstage is, and how much musical detail the record conveys. Acoustic Sounds showed that American companies could make vinyl of higher resolution and better sound than CDs.

Now there are more American companies producing good vinyl than ever, among them Mobile Fidelity Sound Lab, Original Recordings Group, Music Matters, and Sundazed. Analogue Productions is unique in not only overseeing the mastering of recordings from the best possible sources, but also manufacturing LPs in its own plant, Quality Record Pressings (QRP), also based in Salina. QRP opened its doors in 2011. “We wanted to make the best records in the world, control the process, and get the product on time,” said Kassem.

While some APO titles are available on CD, Acoustic Sounds’ preferred digital format appears to be the SACD/CD, a few of which I’ve reviewed: Holly Cole, Sam Cook, and Ray Charles. And through its Super HiRez division, Acoustic Sounds has also recently introduced high-definition digital downloads in FLAC and DSD formats at various resolutions. As Kassem said, “[Acoustic Sounds] is the only site that has it all -- LP, SACD/CD, and high-resolution downloads.”

Kassem is a larger-than-life character with a forceful personality, even over the phone. I wondered how he was able, even in the early years of Analogue Productions, to get companies to license recordings to him. “You can buy the Empire State Building if you offer enough money,” he answered. “It’s just basic negotiation. They tell you what it will cost, and you do it or you don’t.” After talking to Kassem for half an hour, though, it was clear to me that he could, through the power of his personality and the strength of his argument, persuade a record company to let him press their recordings on vinyl. His commitment to the format and his conviction that it should be done well are that convincing. 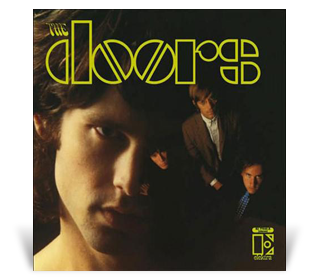 When Kassem decided to reissue the Doors’ albums on vinyl, he had a bit of good fortune. “The Doors’ manager is an audiophile, and he knew we would do a good job with their recordings. We hire the best, and put our heart and soul in it.” Doug Sax mastered the Doors albums, and Bruce Botnick, who produced and engineered the original recordings, oversaw the project. Sax used all-tube gear for the remastering, and Analogue Productions pressed each album on two 45rpm LPs.

My copy of The Doors is a Quality Records Pressing. QRP pressings, even for labels other than Analogue Productions, are easy to identify by their static-free inner sleeves, on which are printed the company’s name. Although the jackets of some Analogue Productions releases come in lighter-weight cardboard, the Doors LPs are in heavy stock with a beautiful, glossy finish. The black-and-white photo of the band on the inner gatefold of The Doors is fuzzy, but the color and reproduction of the original cover is excellent.

The Doors recordings were so well done that even my early-1980s LP of The Doors has a broad soundstage and a natural flow -- or so I thought until I heard this new pressing. The low-end keyboard lines that open “Break on Through” have more oomph, and John Densmore’s drums in the left channel sound as if a veil had been lifted from them. Jim Morrison’s voice is much more realistic and three-dimensional, and the image of his voice is more intimately in the room with me.

“Soul Kitchen” is one of my favorite Doors tracks, and on this pressing Larry Knechtel’s bass line, which anchors the song, is more defined and driving. The touch of reverb originally added to Densmore’s hi-hat is much easier to hear on this pressing than on my older LP, and the dramatic buildup in the chorus is more vivid. Another of my favorites is the band’s version of Brecht-Weill’s “Alabama Song.” The tuba that bleats in the left channel is clear and punchy on this master, and Robbie Krieger’s sharp guitar chords, played against Ray Manzarek’s harpsichord lines, are placed more distinctly apart from the other instruments and come through with more intensity.

“The End” takes up all of side 4 of this two-disc release, and this dramatic track sounds much more exciting than on my other LP. The sense of space that’s essential to the song’s impact is much more impressive and deep, aided by the 45rpm groove cutting. It brings forward important details, such as guitarist Robbie Krieger’s plectrum strokes behind the bridge in the song’s opening moments. The tambourine shimmers in the opening have a haunting edge that emphasizes this track’s feeling of menace. Morrison’s voice is more intense and emotionally urgent, and Krieger’s minor chords are harmonically richer and rounder in tone.

I’d been happy with my old pressing of The Doors, but I doubt I’ll play it again -- the Analogue Productions version is better in every way. It brings me closer to the music, more inside the recording, and lets me really hear how exceptional it is, sonically and musically. You’ll believe, for 40 minutes or so, that it’s 1967 again. 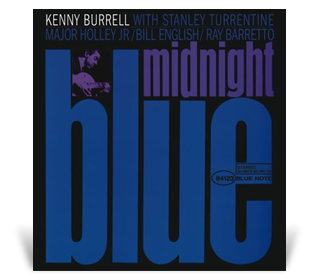 QRP also pressed my copy of Analogue Productions’ reissue of Kenny Burrell’s Midnight Blue, the jazz guitarist’s 1963 masterpiece. A friend sent a tape to me in 1981 that I played constantly, and for me the album defined Blue Note Records, the label that released it. I finally picked it up on CD in the mid-’90s, but didn’t get around to buying an LP until I saw it on Acoustic Sounds’ website. Like The Doors -- in fact, like all of Analogue Productions’ currently available LP reissues -- Midnight Blue is pressed on two discs cut at 45rpm.

Ray Barretto’s congas in “Chitlins con Carne” help set the album’s simmering, late-night atmosphere. On the CD they sound somewhat sharper toned, but this LP lets them sustain more, and reveals a more expansive sound that’s appropriate to such a large, deep-toned instrument. Billy English’s snare-drum taps are also brighter on the CD, but on the LP they ring more deeply, and they’re placed in support of the rest of the instruments, especially Stanley Turrentine’s tenor sax. On the LP, Burrell’s guitar sounds more like the hollow-body electric it is, and the notes of his solos blend together better and more fully.

Major Holley’s low bass rumble in the opening of “Mule” is impressive and deep on this remaster, his long, sliding notes lingering in space. Burrell’s guitar lines flow easily, and with a better midrange feel, than on the CD. English’s hi-hat taps have more body, and his ride cymbal is more precisely placed. When Turrentine’s smoky tenor enters, it’s clearly out in the room and the bell of the horn is easier to visualize. Burrell’s chords in his solo feature, “Soul Lament,” are expansive and warm on this LP, in contrast to their brighter tone on the CD, which makes them sound as if they’re being played on a solid-body electric.

I’ve enjoyed the CD of Midnight Blue, and I think many of the qualities I prefer on this newer LP pressing are inherent to vinyl. However, I can also hear that when Kevin Grey and Steve Hoffman remastered it, they made choices that resulted in a richer, more spacious version of this classic session.

I also listened to two Analogue Productions releases not pressed at QRP. Pallas Records, in Germany, made my copy of Gil Evans’s Into the Cool, and my copy of Hank Mobley’s Workout came from RTI, in California. Though I recommend both of these sets, I won’t go into detail about their mastering -- I mention them only because Pallas and RTI are acknowledged as the best vinyl producers in the world. But the QRP pressings I’ve described are just as good. They’re quiet, they’re beautifully finished at the edges, there are no anomalies (such as small dimples or hazing), and they sound remarkable.

I have several LPs from Sundazed Records pressed by QRP, including two Donovan albums and the Byrds’ Sweetheart of the Rodeo. I noticed a marked improvement in background silence and resolution over some other Sundazed titles I have, although many of their LPs have been pressed well enough by United Record Pressing, in Nashville. When I compared a Sundazed mono of Bob Dylan’s Highway 61 Revisited I bought 12 years ago with a recent QRP pressing of that album, the difference was easy to hear. There was much more space, inner detail, and life in the newer pressing, which I suspect was remastered by Kevin Grey.

Chad Kassem put a lot of energy and thought into how QRP could make great vinyl, and was able to do some things to improve the manufacturing of LPs. The company’s website points out that because no one has made new vinyl presses in some time, QRP rebuilt and modified older presses made by SMT, Toolex Alpha, and Finebilt. They added microprocessors to the presses that “allow both the operator and the engineer a level of control capability and feedback simply unavailable with manual valves and control systems.” Kassem also brought in Gary Salstrom, whose long career in LPs includes work with RTI and Classic Records as a plating engineer. Mark Huggett, another industry veteran, came out of retirement to ensure that QRP’s modified presses are working efficiently and consistently.

Thirty years ago, when it looked as if CDs would soon be our only option, and that turntables, tonearms, phono cartridges, and the LP itself would disappear from the marketplace, vinyl lovers felt something like despair. But demand for vinyl is now high enough for a new, world-class pressing plant to join Pallas and RTI, and other plants are doing work that is often very good. New turntables are easy to find on the Web, if not in your local shop, and many entry-level ’tables are very good. Chad Kassem was among the very few who all along has kept the vinyl faith. If you, too, love what Stan Ricker calls licorice pizza, you owe Kassem your thanks.