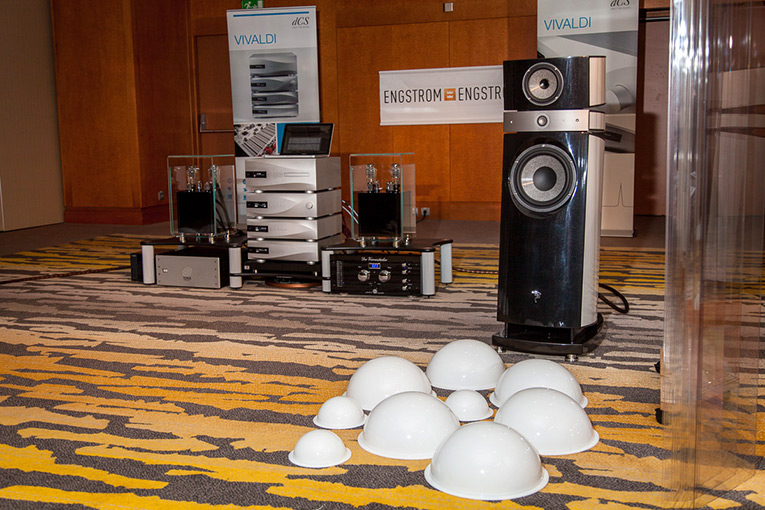 The new dCS Vivaldi was shown with the magnificent Der Vorverstärker, from German company MBL, and the exclusive Swedish tubed power amps from Engström & Engström, the Lars Type 2. The blobs on the floor are a new idea from creative acoustic guru Matts Odenmalm, of Svanå Miljöteknik; if you’ve been to Marten’s rooms at CES or Munich’s High End, you may have seen his very efficient acoustic “wing” diffusor. There will soon be a few wings in my own listening room! 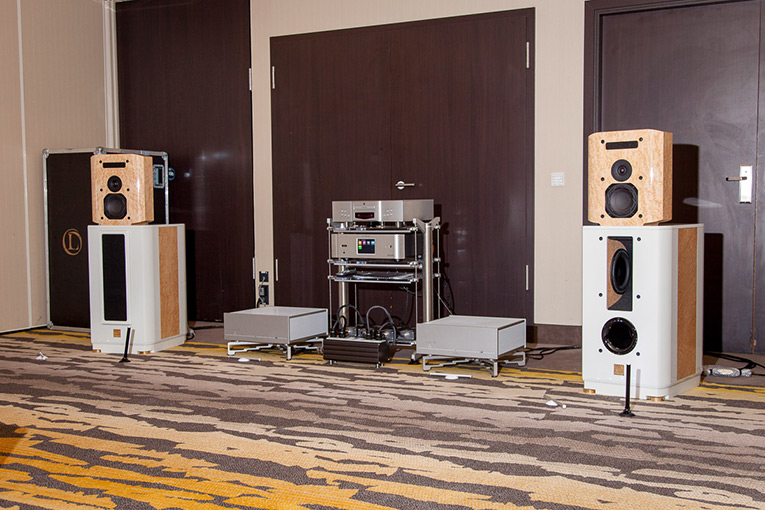 Latvia’s Onda Ligera Wave speakers look much better in real life than in this picture -- and by the end of the show they were sounding surprisingly good. The guys from Onda Ligera had brought with them an upgrade to the crossover, which they installed late Saturday night -- and then they had to adjust the speakers’ positions. In the end, it made quite an improvement. Great soundstage. 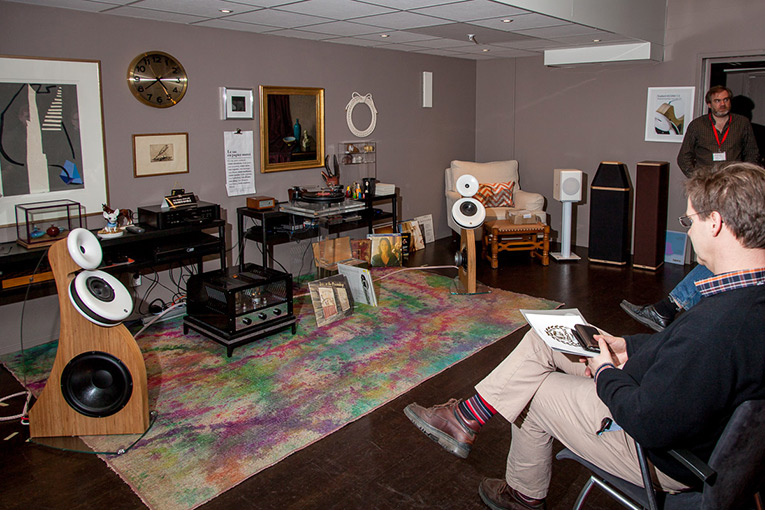 These speakers are made by the Finnish company Gradient, which once upon a time started with a dipole bass system for the Quad ESL-63 (they still do dipole). The looks? Well, you might get used to them. But they sounded great. The turntable is made by Swedish firm Simply Black, and the amp is a brand new one, also from Sweden. It’s the Dream, from Hesselvall Audio, designed by Erik Andersson, well known for his work for Audio Innovations and many other collaborations. 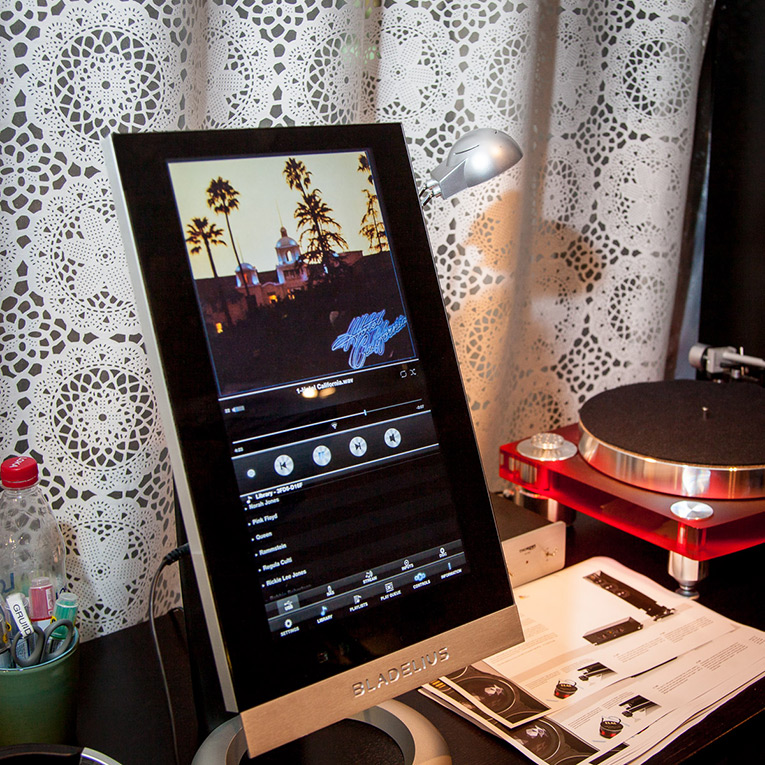 Mimer is the new media player from Bladelius Audio. Mike Bladelius moved back to Sweden some years ago, after contracting for several well-known US brands. The Mimer can play the lot, and on the way is a Bladelius class-D amp to hook up to it, for a complete electronics solution. 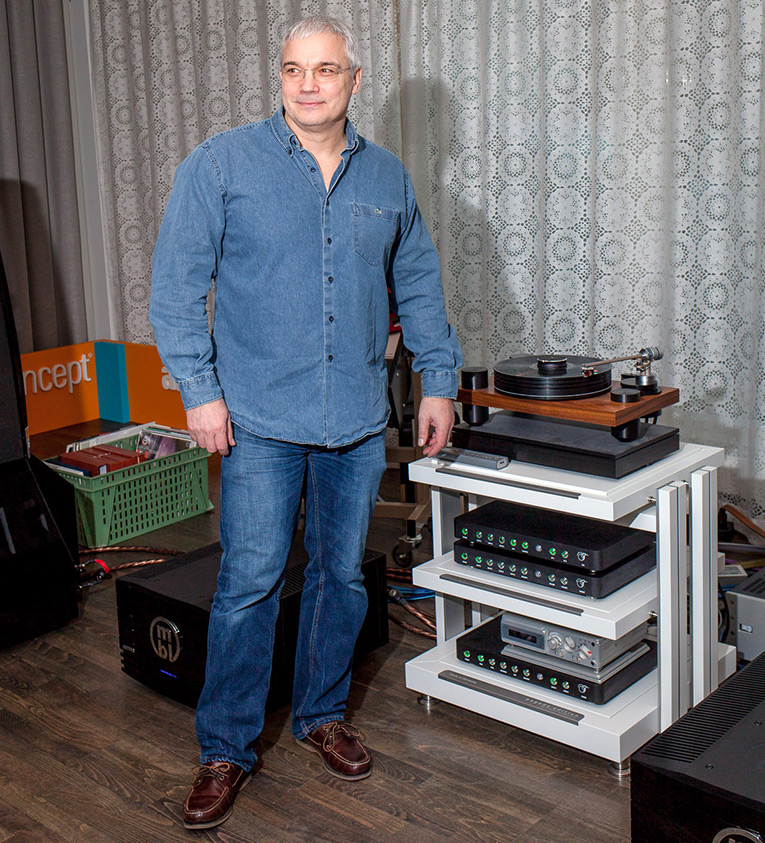 Dietmar Breuer, of the German company Trinity, was telling me about his exclusive and very exciting preamp, DAC, and, last but not least, RIAA amp. Vastly expensive but technically top notch. 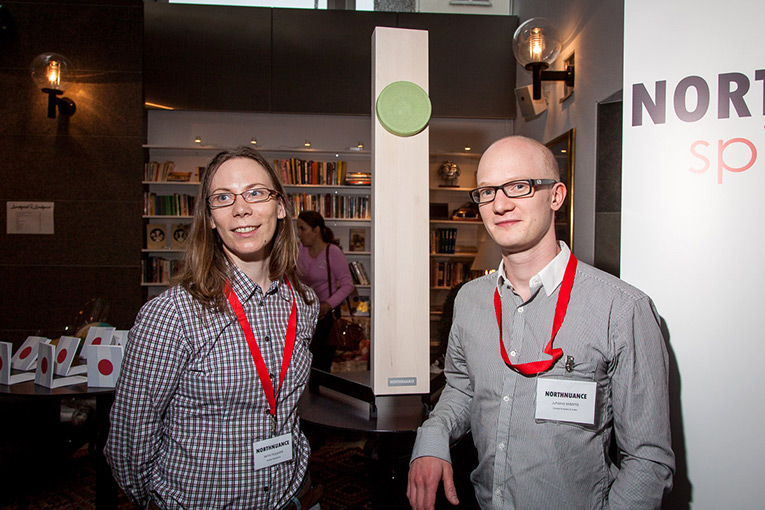 A big surprise from Northnuance, a brand-new Finnish company, was the sleek Spiro -- a full-range speaker in a sort of transmission-line cabinet. It looks really nice and well built, and the sound was very good for €995 per pair. Need more bass? You can add a Northnuance Subspiro subwoofer, but it’s bigger and costs more than the Spiro itself. 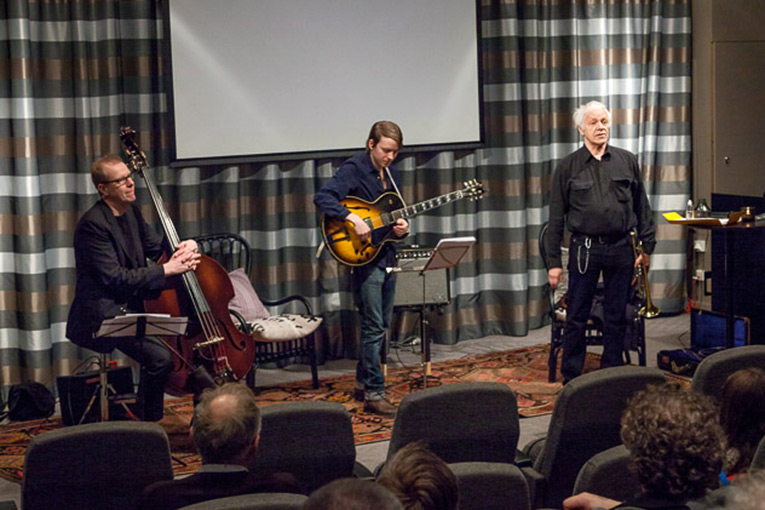 There wasn’t only recorded music at HEM 2014-- there was also the real thing. Jan Allan, the famous Swedish jazz trumpeter, played with Hans Backenroth and Daniel Svensson, and told the attendees some stories about his long life in music. 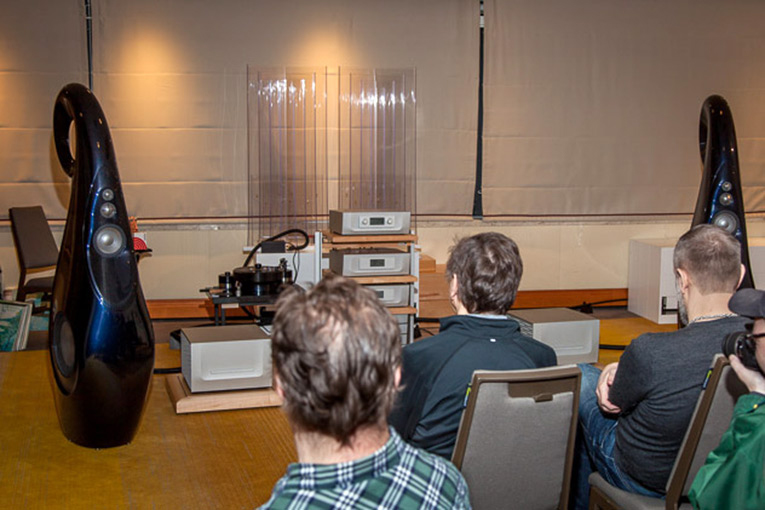 The largest model from Vivid Audio, the Giya G1, was driven by a lot of Constellation Audio products. I had a long talk with Vivid’s Robert Trunz, and now there’s a pair of the smaller Giya G3s in my room, awaiting review. Very interesting speakers. Constellation Audio made its first major presentation in Sweden. Peter Madnick of Constellation showed me their brand-new integrated amp, the Argo -- a real gem! Near the back wall you can see a pair of Matts Odenmalm’s marvelous acoustic wings. 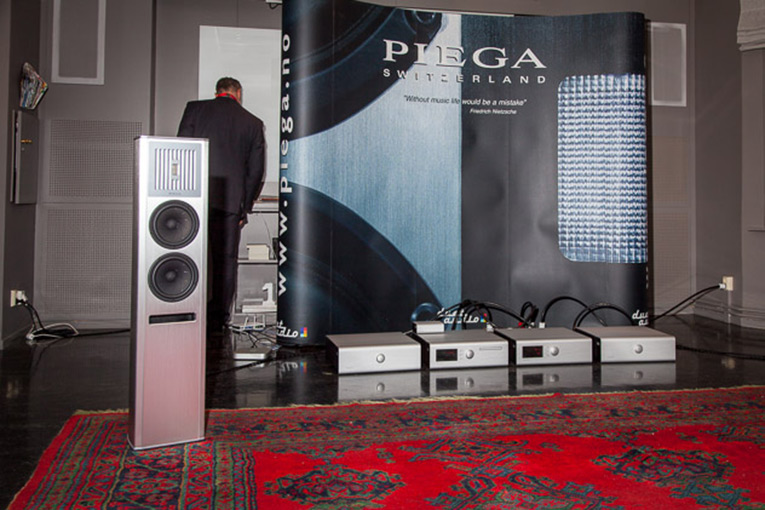 Piega is a Swiss company that I first got to know through their active loudspeakers. Here is one of their passive models driven by some very competent electronics from Soulution, another Swiss company. Both brands are new to the Swedish market. 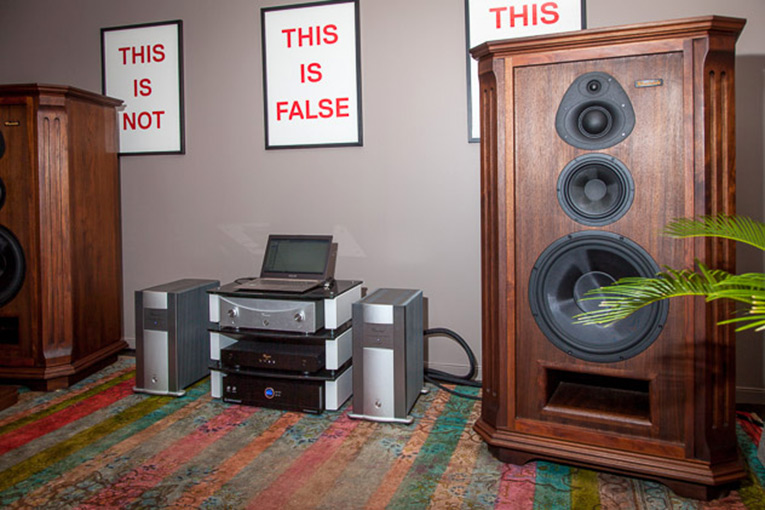 The Airedale is the biggest speaker model from the classic British manufacturer Wharfedale. Together with other classic brands -- Audiolab, Luxman, Mission, Quad -- Wharfedale is now part of International Audio Group, a Chinese-based organization. 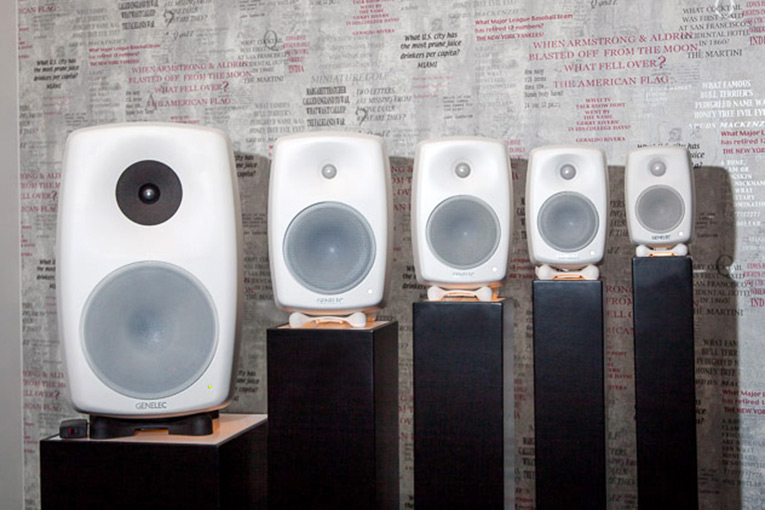 Genelec, a Finnish speaker company, makes active studio monitors found in professional audio installations all over the world. A year ago they launched their G series of models specially adapted for home audio. 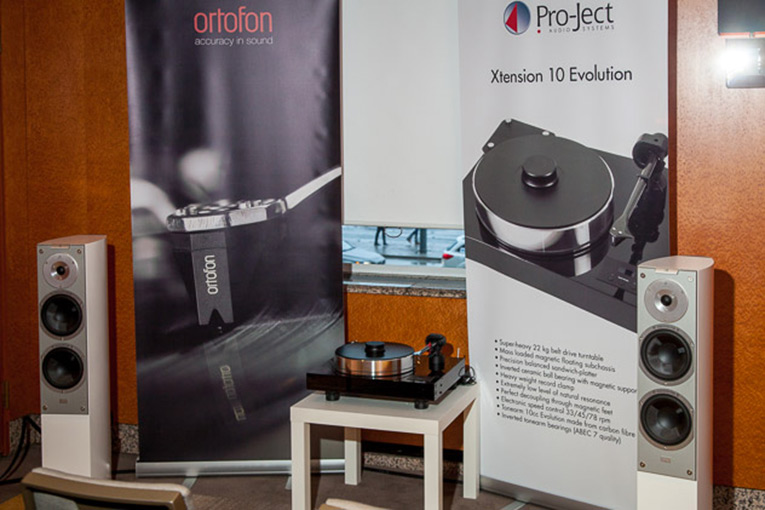 Ortofon is a very old Danish cartridge manufacturer that refused to believe that vinyl was dead -- and now the company is healthier than ever. In Stockholm, they demonstrated a number of cartridges in the same system -- a great opportunity to hear the different sounds of different cartridges. The turntables were from Pro-Ject, the speakers from Danish company Audiovector. 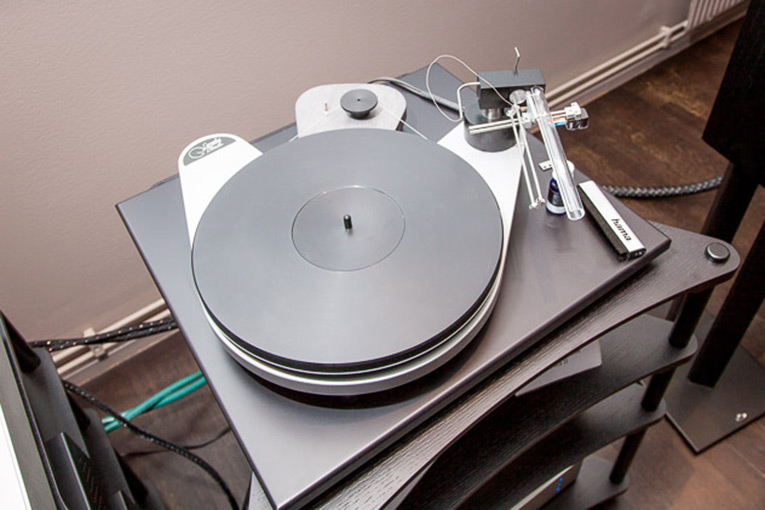 The Magic, from Simply Black, is the latest turntable design by Miroslaw Stasilowicz, who was born in Poland but has been based in Stockholm for as long as I can remember. The tonearm is the Simply Black Cantus, based on an idea from the late, legendary Bo Hansson -- a founder of the Swedish record label Opus3. 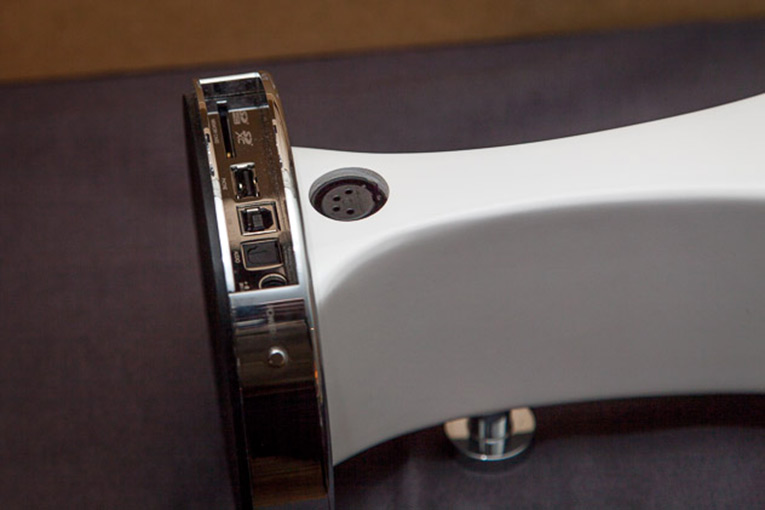 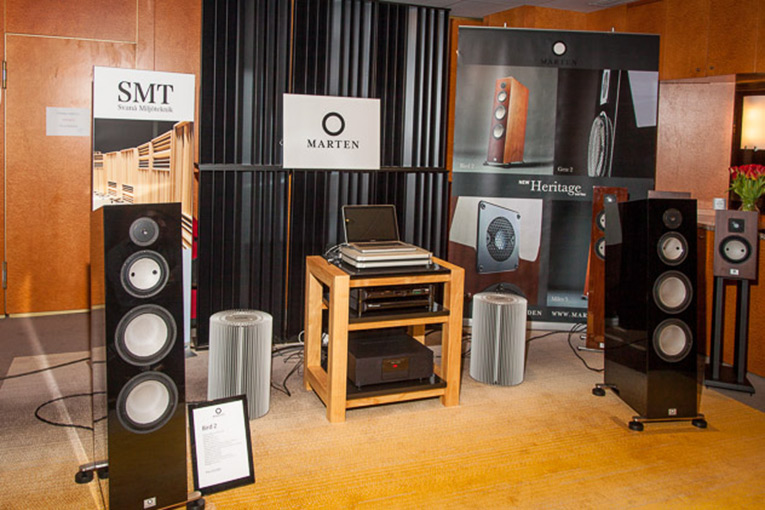 Marten, based in Gothenburg, Sweden, demonstrated their Bird line of speakers with MBL electronics. The Birds come between Marten’s entry-level Django line and their top speaker models, the Coltranes. Their room was, as usual, acoustically very well treated. 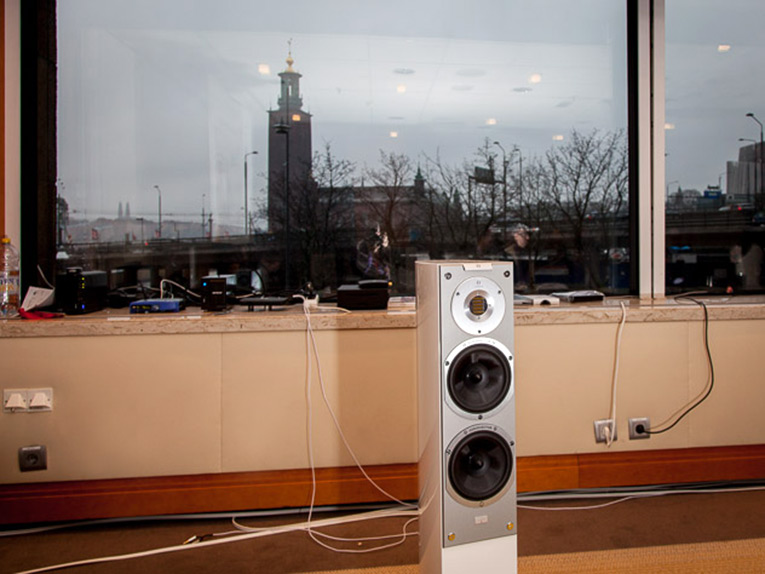 The venue for HEM 2014 is at the very center of Stockholm. The view behind the Audiovector speaker is the Stockholm Town Hall, where the famous Nobel Dinner is held each year. This is a fitting venue for an excellent audio show.