Some of you might object to the notion of a hi-fi system as “a work in progress,” and up to a point, I concur. With a new system or even the purchase of a single component, you shouldn’t be thinking about anything beyond getting it home, setting it up, and looking forward to many years of musical pleasure. Unfortunately, most audiophiles are infected with a disease called “upgrade-itis,” an obsessive, near-psychotic need to renew or refresh one’s system in perpetuity. It’s what keeps the hi-fi industry going, as cars once did with the planned obsolescence of annual model changes.

But there’s a precedent which renders such behaviour profligate and masochistic: look back to the golden age of 1950 to 1970, when equipment from companies such as McIntosh, Quad, AR (Acoustic Research), Dynaco, Harman/Kardon, and many others lasted decades, with models staying in production for ten or more years without revisions that made owners feel as if their set-ups were out-of-date. Hell, Denon, Klipsch, and Ortofon have had classics in production for more than a half-century. What was good last Tuesday will still be good next Tuesday, no matter what is introduced in the interim.

Over the next few months, I’ll attempt to update what I’d buy today if I were 16, with a part-time job and a burning desire to have my first decent system, as back in 1968. The differences are that (1) I’m not at the mercy of a salesperson eager to fleece a schmuck kid; (2) I’d skip buying a receiver or tuner, as I accept that I never gave a toss about radio; and (3) the system would require one overriding virtue, in that every single component should survive the upgrade of any other, in any order.

By that, I mean the speakers should be able to do justice to a new, more powerful amp; conversely, the original amp should cope with a speaker upgrade. The phono stage and tonearm must accommodate whatever cartridges I wish to use. This is in direct contradiction to the practice first established in the UK in the 1970s by Linn, in which a buyer with, say, £600/$1500 was commanded to allot 70% of the budget to an LP12, the rest being a dirt-cheap integrated amp and a £99/$135 pair of speakers. The argument was “garbage in, garbage out.” What they didn’t tell you was that a rock-bottom amp/speaker combo hardly lets you hear an expensive front-end. 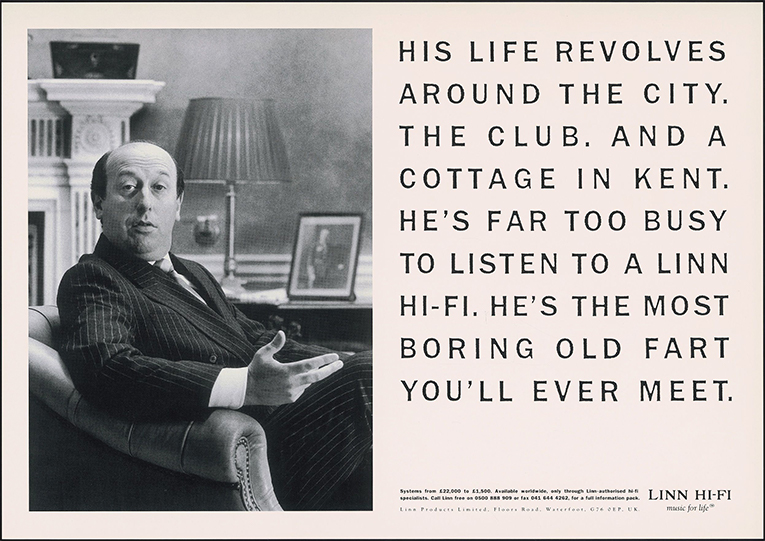 Instead, I always preferred balance. First, I set a budget which was the 2021 equivalent of $700 USD in 1968. The algorithm I used equates this to $5440 today, but I rounded it up to $6000 to provide wiggle room. As I didn’t include speaker stands, headphones, or trick cables in my initial purchase (those were the days of zip wire), the $6000 was allocated solely to source, amplification, and speakers. Moreover, I made this starter package LP-playback-only, but we’ll discuss adding digital sources later on.

Keep in mind that there are literally millions of combinations—yes, literally, not hyperbolically—if you multiply the number of turntables, arms, cartridges, phono stages, preamps, power amps, and speakers on the market. For clarity, and driven as I am to ensure total flexibility with an eye to price, I opted for a combination turntable/arm/cartridge purchase, a phono stage with output level control so it can act as a (single-source) preamp, a stereo power amplifier, and a pair of speakers.

If any of you are old British farts who still believe the above-cited “flat Earth” bullshit of the Linn/Naim era, you’re probably apoplectic in seeing that Kessler has allocated $2750 of a $6000 budget just for the power amp. Mad as that seems, I did my maths, adding the front end, phono stage, and speakers to it, and then factored in a 10% discount because I know each and every one of you will haggle as if in the marketplace at the beginning of Casablanca.

Before we get to my choices, the truth is that a fine Rega or Pro-Ject entry-level turntable with an Ortofon or Audio-Technica cartridge, PS Audio’s phenomenal Sprout, and any of a number of sub-$600 speakers will satisfy—no, more than satisfy—99% of the population, and all for under $2000. That’s $230 (or a mere £100) back in 1968, a third of what I’m proposing. But bear with me. Then decide if I’m nuts. 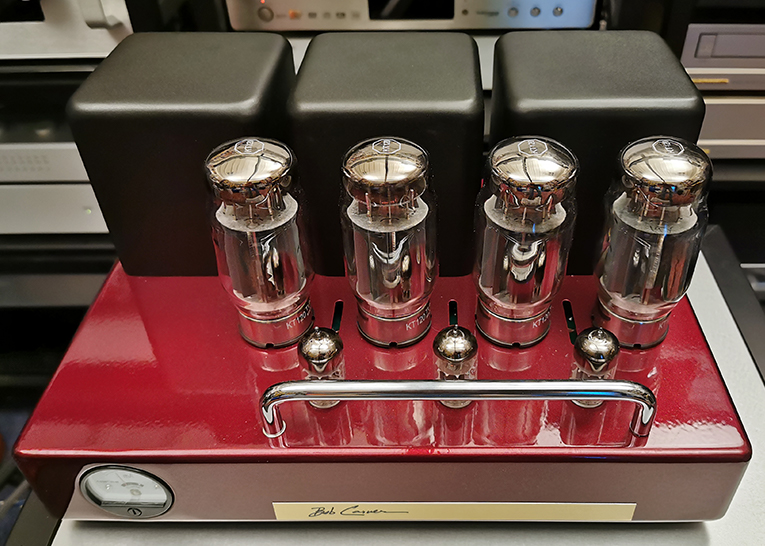 Amusingly, it was a product not even sold in the UK which started me on this quest: the Bob Carver Crimson 275 amplifier. After Josh Bizar at Music Direct told me that the Crimson 275 was a little miracle, and because I’m shallow enough to have fallen in love with its looks, I got in touch with the company, arranged payment, and waited for a unit suited to the UK’s 50Hz/240V AC mains.

So straightforward is this little beauty, so clear the instructions, that I slipped it into the above-cited high-end system, making music in ten minutes. On every level, it exceeded any expectations one might apply to a $2750 stereo power amp. My reaction was instant and, I believe, valid, because I’ve been listening to KT120s daily for two years, so I know what that tube’s characteristics contribute to the sound. What I didn’t anticipate were the sheer grunt, bottom-end control, quietness, and openness of the Crimson 275.

As this is not a shootout with the Ref 75SE, nor a conventional review per se, I won’t compare the two, nor will I go into the sort of minutiae a traditional review demands. Despite the same output tube complement, they sound and behave unlike each other in many ways. But you could say the same about a Lamborghini vs. a Pagani: your preferences will decide for you. Instead, this is strictly about justifying it in the context of my fantasy starter system, and cost is the issue. One would not compare the Lamborghini or Pagani to a Fiat 124 Sport Spider. 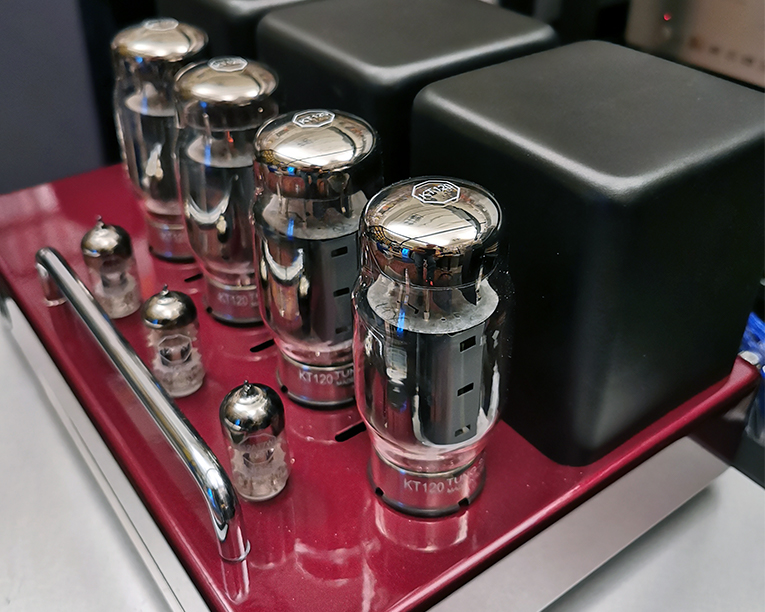 Suffice it to say that the Crimson 275 powered the Wilsons so admirably that I suffered not a shred of loss. It certainly wasn’t a situation of better-or-worse so much as one of difference. Yes, the Ref 75SE costs as much as five or so Crimson 275s, its updating to KT150s delivering more slam than KT120s, and there are other areas I could dissect, but this is not about the Ref 75SE. It’s about the Crimson 275.

Swiftly, the amp proved to be robust, coherent, commanding, and substantial, so as to suggest no likelihood of it meeting a budget speaker system it couldn’t drive. That accepted, I moved on to musing about its physical presence and form—what it offered for the bucks. The crucial “perceived value,” as it were. Let’s be honest about this: entry-level customers deserve that buzz about the gear looking cool just as much as big spenders do.

At the initial tire-kicking stage, the Bob Carver Crimson 275 displayed handsome—nay, irresistible—styling. It elicited enchantment in the wine-colored chassis, earned respect for the way the tubes sat perfectly in their bases (which is more than can be said for many of the amps from the country that gave us COVID-19), and evoked delight in the cool meter. Be truthful: everyone loves cool analogue meters. Compact, finished to perfection—this is one clean-looking, shelf-friendly component. 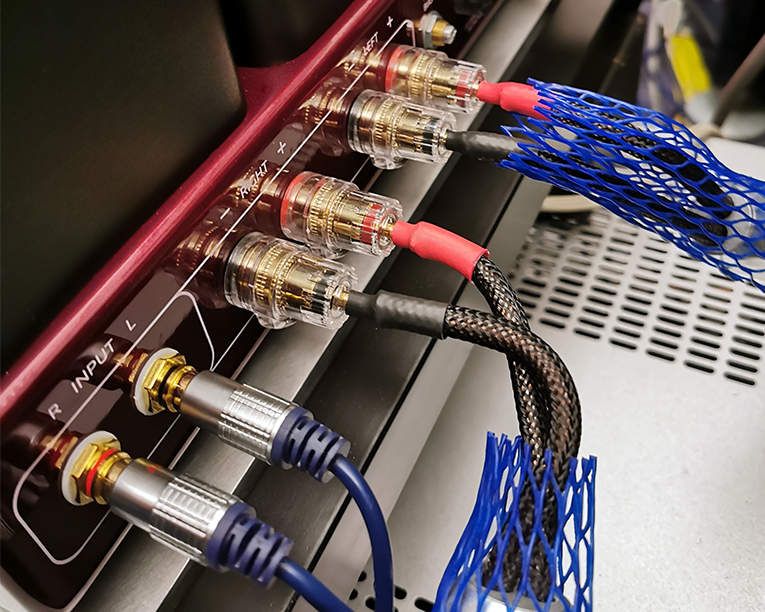 Around the back was everything else. Each socket or terminal exuded ruggedness with the promise of solid contact, the multiway speaker terminals particularly noteworthy for their suggestion of no expense spared. The transformers are beautifully housed, the on/off switch a chunky toggle, the inputs gilded RCA phono sockets, the two fuses easily user-accessible, and the AC cable of the detachable sort. The latter invites the first possible upgrade for the budding audiophile, with the easy-peasy swapping of the supplied mains cable for something aftermarket and tweaky. And then there’s the little screw head for biasing the tubes in conjunction with the meter. This is hands-on enough to say it was made for grown-ups, as well as newcomers and novices.

What about the sound of the complete system? As this is a work in progress, that aspect will have to wait. Next month, we’ll discuss the speakers which rattled my cage. But as for the Carver Crimson 275, for the time being, if this is the heart of my fantasy starter system, pray bring on the rest.