Blown Away: Three Demos at the 2019 EISA Global Press Convention

The trade organization EISA is best known for its annual product awards, which span six product categories divided into Expert Groups: Hi-Fi, Home Theater Audio, Home Theater Display and Video, In-Car Electronics, Mobile Devices, and Photography. Originally called the European Imaging and Sound Association, the organization renamed itself, in September 2018, the Expert Imaging and Sound Association, to reflect its growth from an association of European online and print publications to one that welcomes journals from around the globe. SoundStage! Hi-Fi became a member in June 2018. 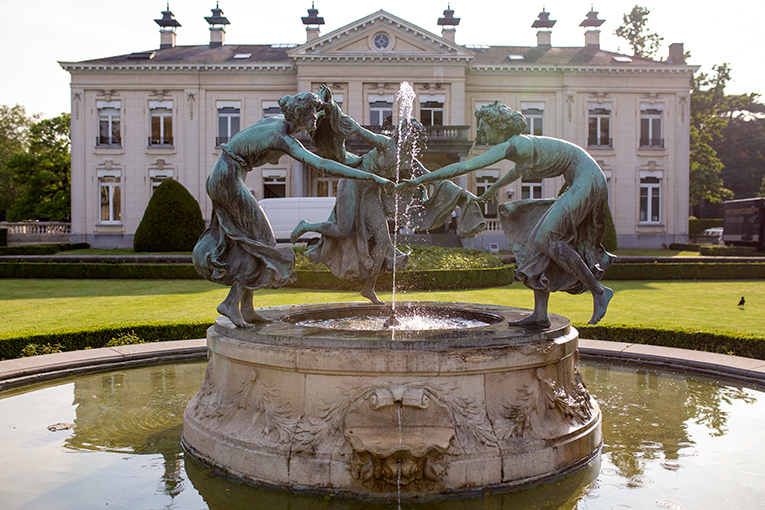 Each June, EISA holds its Global Press Convention, attended by one representative from each member publication. This June 21-25 I flew to Antwerp, Belgium, as I had last year, to see and hear products presented by various companies -- at the Crown Plaza Antwerp hotel, where we stayed, and at the lavish Kasteel den Brandt, a castle about half a mile away. Of the dozens of presentations, I was concerned only with the 14 hi-fi demos, three of which blew me away.

The first hi-fi presentation, at Kasteel den Brandt, was of Sennheiser’s Ambeo soundbar. My lack of anticipation had nothing to do with Sennheiser -- the German company makes some of the best headphones and microphones around -- but because I hate soundbars, which seem to me to be inherently compromised products. First, for reasons not of sound quality but convenience, they’re designed to be mounted above or below a video display -- and no competent speaker designer looking to provide high-quality sound wants to horizontally align their drivers and jam them into so small a space. Second, all soundbars are designed to do double duty as a quasi-surround-sound system for home theater and as a two-channel stereo system for music, but excel at neither -- they offer the worst of both worlds. Compounding the problem are the low retail prices most soundbars are designed to meet. I’ve talked to sales reps from numerous companies, who tell me that soundbars priced higher than $1000 are basically unsellable -- consumers want something very cheap, so the designers have to further compromise these already compromised products by using lower-quality parts, and omitting technology that might help them sound better. The result is pretty pathetic sound quality. 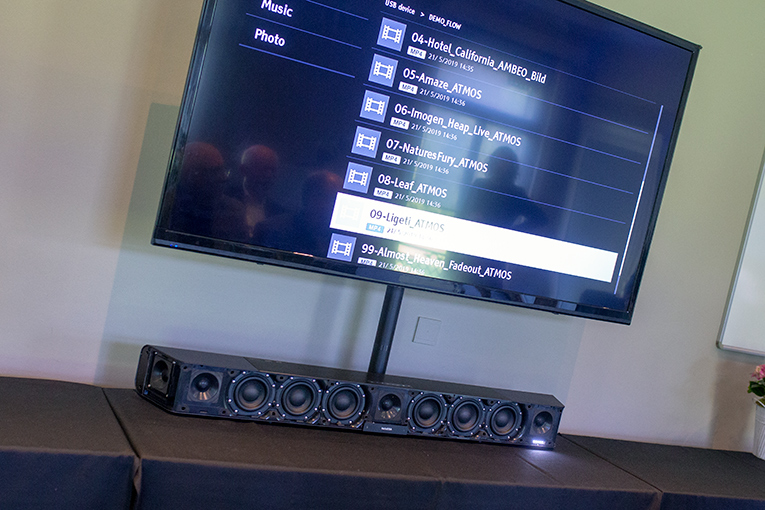 Enter the Ambeo, which uses Sennheiser’s Ambeo 3D technology, which they also use in their headphones and microphones. The Ambeo looks like a typical soundbar, but the moment Sennheiser fired it up and turned on its 3D processing, I experienced a soundstage that shocked me: at least 15’ wide and 8’ tall, even from my non-optimal seat at the back of the room, to the right. Around the sides and toward the rear, there was even envelopment akin to what’s produced by a real surround system. It was hard to believe that all that sound was coming from a speaker measuring only 49.8”W x 5.3”H x 6.7”D. Add to that great clarity, natural tonality, and bass that sounded as if it was coming from a subwoofer, and here was a soundbar whose sound was light-years ahead of its competition.

With the 3D processing disabled, the sense of space to the front, sides, rear, and above all disappeared -- the sound was now far less immersive, not nearly as impressive. But the great clarity and spot-on tonality remained, as did the astounding bass depth. Sennheiser claims a frequency response of 30Hz-20kHz, -3dB, and swore that no subwoofer was active during the demo (though the Ambeo does have a subwoofer output). But when the 3D processing was switched back on and more clips of movies and live music were played, all eyes in the room opened and all ears pricked up. Everyone seemed in awe of what they heard -- I know I was -- but I also knew Sennheiser must have broken some rules to create such an impressive product. 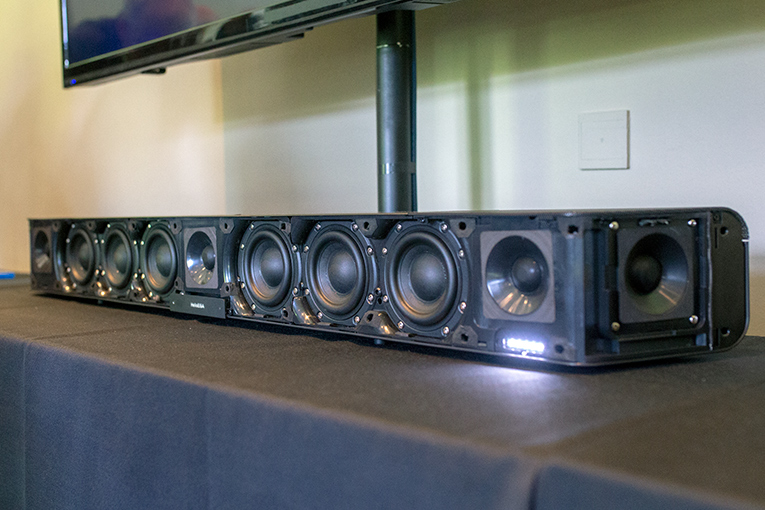 They have, and the big rule broken by the Ambeo is price: It costs $2499.95 USD, at least 2.5 times what most soundbars sell for. That may make it a hard sell, but so high a price point allowed Sennheiser’s design team of 15 to create a soundbar with an aluminum enclosure packed with 13 high-quality drivers, all internally amplified, their collective output organized by a complex DSP engine programmed to synthesize ten channels of sound: five horizontal (center, front left and right, rear left and right), one low-frequency, and four height; i.e., a 5.1.4-channel system. What’s more, Sennheiser seems to have overcome some -- though not all -- of the sonic constraints imposed by having to place a soundbar above or below a video display.

No, Sennheiser’s Ambeo doesn’t sound as good as a comparably priced surround or two-channel system (see the Elac Navis speakers below), but it was, to my ears, a million miles better than any other soundbar I’ve heard, particularly in terms of soundstage size, bass extension, and overall clarity.

Andrew Jones was on hand to show off Elac’s Navis ARB-51 bookshelf loudspeaker ($1999.98/pair), which he designed at Elac’s US subsidiary, in California. (Elac is based in Germany.) The ARB-51 and its bigger sibling, the Navis ARF-51 floorstander ($3999.98/pair), are both three-way, active speakers with analog crossovers (i.e., resistors, inductors, capacitors), as opposed to the digital signal processing (DSP) used in more and more active speakers these days. In an active design, the crossovers precede the amplifiers in the signal chain, which means that the amps directly power the drivers. The ARB-51 and ARF-51 each have a 40W amp for the tweeter, a 100W amp for the midrange, and a 160W amp for the woofer(s): one in the ARB-51, three in the ARF-51. 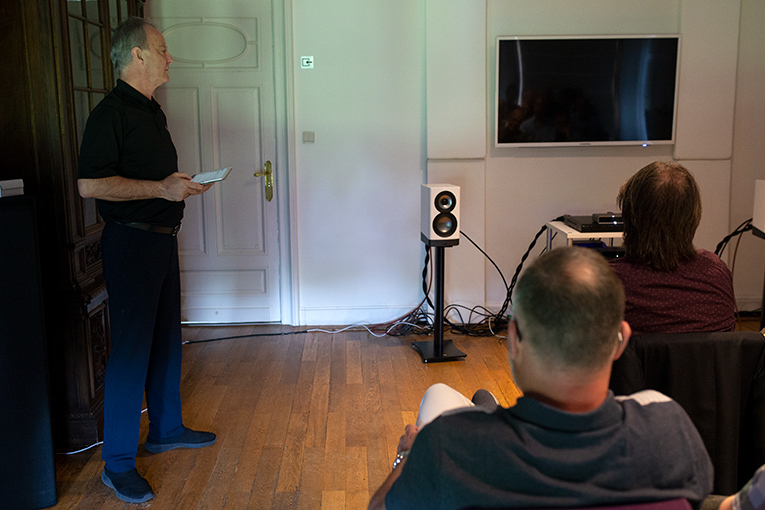 At the heart of the Navis ARB-51 and ARF-51 is a Uni-Fi driver -- a coaxial design in which the tweeter is mounted in the throat of the midrange cone, so that the middle and high frequencies emanate from, effectively, a single point in space. If that sounds like a KEF Uni-Q driver, it shouldn’t surprise -- Jones worked at KEF in the 1980s and ’90s, when the Uni-Q was being developed and refined. He also worked at Technical Audio Devices (TAD), which uses coaxial drivers in most of their models.

The Navis ARB-51s were demonstrated with Elac’s Alchemy DDP-2 preamplifier-DAC-streamer and Alchemy Discovery DS-S101-G music streamer, designs born of Elac’s purchase of Audio Alchemy in 2016; all wiring, including the speakers’ power cords, was by AudioQuest.

Gordon Brockhouse had raved about the Navis ARB-51s in a review, published April 1 on SoundStage! Simplifi, that won them a Reviewers’ Choice nod, and I’d heard them at length at this year’s Montréal Audio Fest, where they’d sounded great. Still, as Andrew Jones played track after track, I was taken aback at how incredibly good and big they sounded at Kasteel den Brandt, in a fairly large room with a 10’ ceiling and at least 15 people providing considerable absorption. Even at high volume levels, the clarity and detail remained outstanding, while the bass was deep and rich enough to sound as if produced by much larger speakers. After the demo was over, I told Jones that if he’d concealed the identity of the speakers, I’m sure that most in the room would have thought that he was playing the Navis ARF-51 floorstanders sitting idle along one sidewall -- or maybe even bigger floorstanders yet. 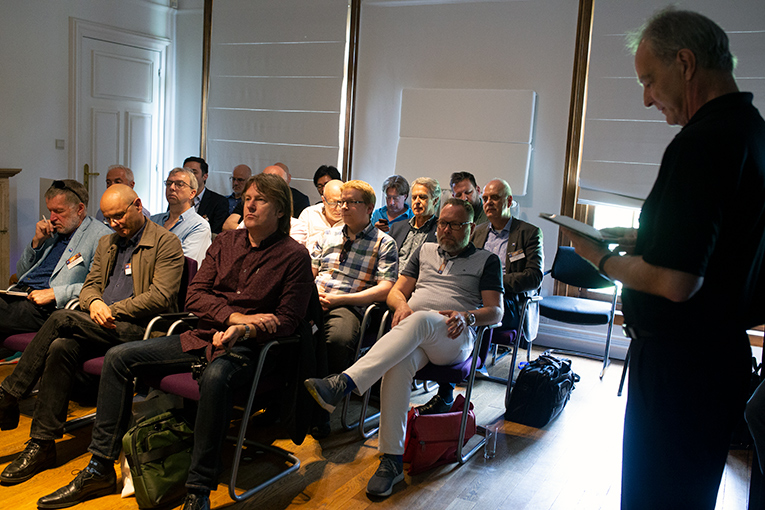 In short: At the 2019 EISA Global Press Convention, Elac’s Navis ARB-51 stunned once again -- and at a very reasonable price.

I knew little about UK-based IsoTek when their demo began, other than that they make power products: conditioners, cords, and connectors. Front and center in a large conference room at the Crowne Plaza were their new Smart Power power conditioners: the Alpha, Delta, and Theta, all aimed primarily at the custom-installation market for multi-room audio/video, in-wall and in-ceiling speakers, etc. These models can be controlled using a web-based app. For example, using the app, individual outlets can be named for easier identification, and programmed to be activated at a particular time, should the components plugged into them need power at a certain time of day, as well as to be activated in a certain sequence, if one component needs to be powered up before another, following a specific time interval. There are also many other features that custom installers will appreciate, including the option of performing the tasks remotely -- which their customers will like. 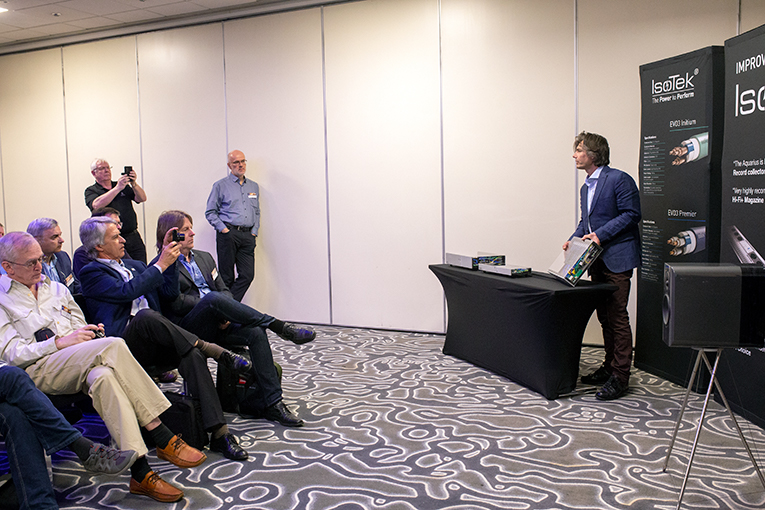 But I wasn’t there for such features -- I was there for the sound. Thankfully, in the final minutes of his presentation, Keith Martin, IsoTek’s managing director, performed a short demo using a Primare CD player and integrated amplifier, and a pair of Q Acoustics Concept 300 stand-mounted speakers. He first played a track from a CD (I didn’t catch the title or artist) with the electronics plugged into a generic power strip, this in turn plugged straight into a wall outlet. It sounded basically fine, but the bass was bloated and ill-defined, which I first thought had to do with the Concept 300s being too small for the room -- the speakers sounded as if they were struggling to fill the space. Martin then powered down the electronics, unplugged them from the power strip, then plugged them into a Smart Power Theta conditioner (£2995 in the UK; US price not yet set), in turn plugged into the Crowne’s wall power, and played the same track at the same volume level. The bass was no longer bloated and ill-defined, but very tight and far more detailed. Even the midrange, which hadn’t sounded off to me before, was now considerably cleaner, with details I hadn’t heard the first time. But what most startled me was that none of these differences was small -- all were painfully obvious.

The difference was so profound that it crossed my mind that the demo had been rigged in some way. Later, I asked others if they’d heard a difference, and if so, how big. The response seemed unanimous -- everyone, apparently, had heard just as big a change in the sound as I had. But why? Many shrugged, but the most common guess I heard was that if the wall power was as poor as it usually is in hotel conference rooms, any good power conditioner would have made a bigger improvement than you’d hear in your home, which should have better power. 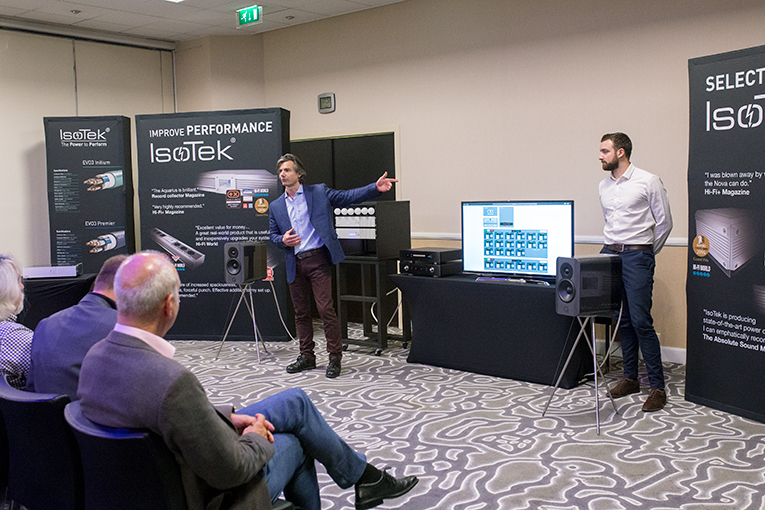 Still, the improvement wrought by IsoTek’s Smart Power Theta surprised me as much as did the sound quality of Sennheiser’s Ambeo soundbar. Later, I cornered Keith Martin and told him I was having a hard time believing that the improvement I’d heard was real. He mostly smiled, then made me an offer I couldn’t refuse -- he said he’d send me an IsoTek product so I could experience it firsthand. If it shows up, you’ll read about it on this site, in this space or in a formal review.

The annual Global Press Convention is just part of what EISA does in leading up to the organization’s annual award selections and presentations. The member publications have reviewed many products since August 15, 2018, when last year’s awards were announced, and while some of those products were shown at this or last year’s Convention, others weren’t. In mid-June, each member selected from its last year’s worth of reviews the products they thought might be worthy of a 2019 award. (One of our nominations is Elac’s Navis ARB-51.) A smaller group -- SoundStage! Hi-Fi wasn’t one of them -- met in Slovenia June 25-28 to consider all nominations and determine which would win which awards.

On August 15, 2019, EISA will announce their annual awards worldwide on the EISA website, www.eisa.eu, as well as on this website’s EISA section, and on the sites and in the print editions of the other member publications. Finally, on September 6, all members will again convene, this time at the annual EISA Awards Ceremony, in Berlin, Germany, to present the awards to representatives of the winning companies. After that, the awards process will start all over again, for the winning products of 2020.