The Best of the Tokyo International Audio Show 2019

The annual Tokyo International Audio Show (TIAS) is small enough that, in the show’s three days, one person can cover it all. But while it’s much smaller than, say, Munich’s High End or Warsaw’s Audio Video Show, each of which requires a team of three or more reporters to get everywhere, TIAS is a significant show -- hi-fi is still big in Japan, and brands from around the world exhibit there, mostly through their distributors. (TIAS began as a distributor-run show, to showcase brands from outside Japan.) Some of these brands even use the show to debut products. But what I most like about TIAS are the unique products on display, made by Japanese brands that don’t exhibit at other shows, as well as products that may be made elsewhere but are sold only in Japan. For all these reasons, it’s important that we report on TIAS. 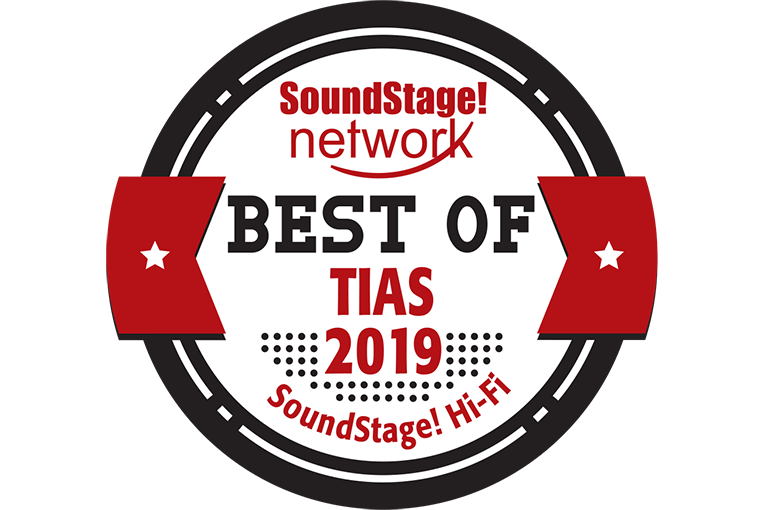 I was the only SoundStager who attended and reported on TIAS in 2013, 2016, and 2019. This past November 22-24, as in those previous years, I saw and wrote about the sorts of products mentioned above in coverage posted on SoundStage! Global during the show. From those products I’ve picked my favorites -- the Best of TIAS 2019, discussed below. Given the show’s international bent, I was sure I’d find a non-Japanese brand displaying something that would blow my socks off, but it didn’t happen -- this year, every one of my Best-ofs was made by a Japanese company. All prices are in Japanese yen (¥), which, at the time of writing, was trading at $1 USD = ¥110. 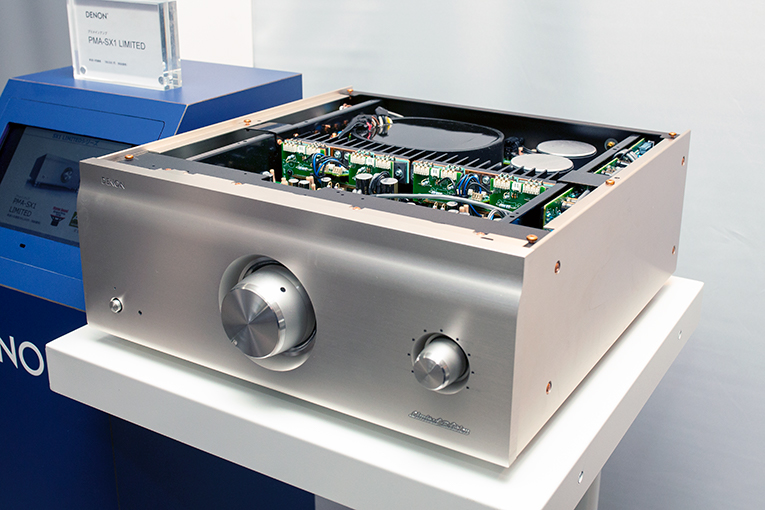 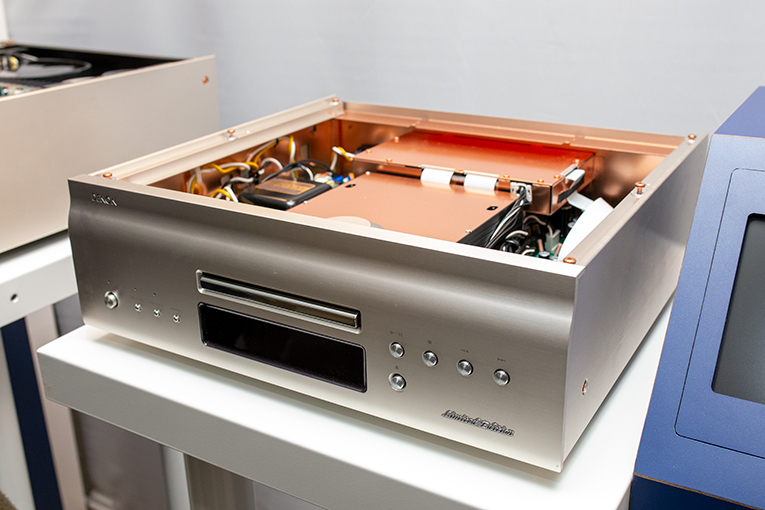 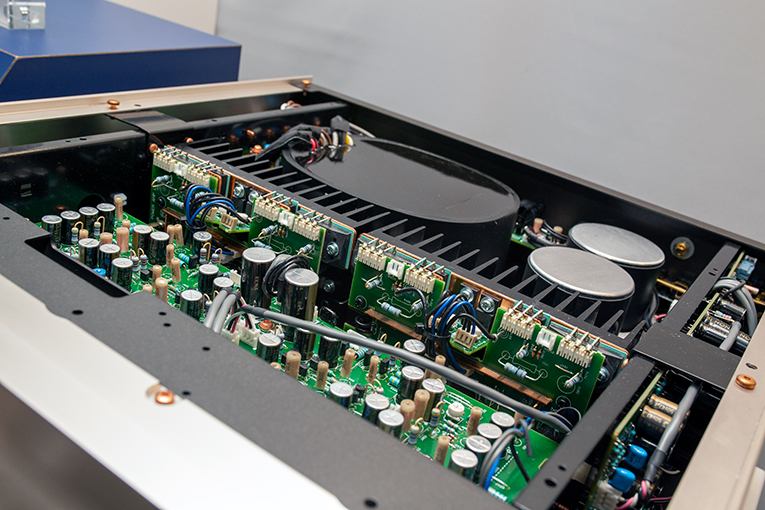 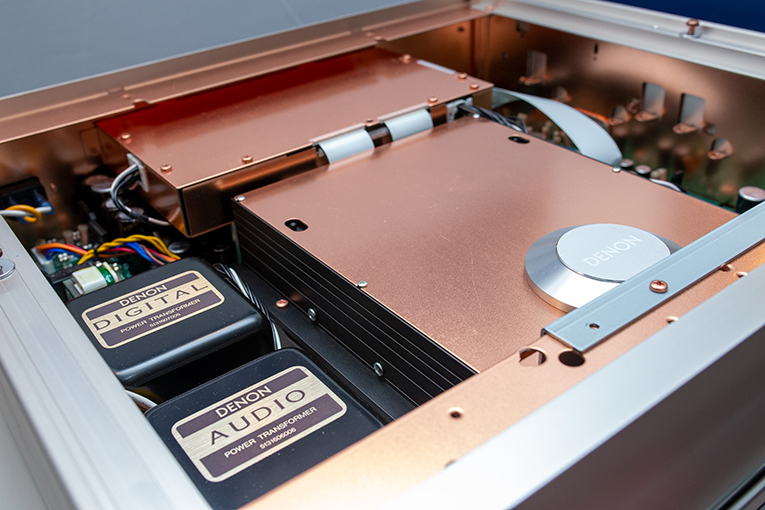 The DCD-SX1 Limited is built to the same high standard as the PMA-SX1 Limited, with an interior that appears to be entirely lined with copper. It plays the disc formats most important to audiophiles -- SACD and CD -- and can also function as a D/A converter. The digital inputs on its rear panel include a USB port, which supports DSD up to 5.6MHz and PCM up to 24-bit/192kHz.

When I asked a Denon rep why these models are available only in Japan, he explained that high-priced Denon gear doesn’t sell well in the US and Canada. It occurred to me that this might be a self-fulfilling prophecy -- maybe Americans and Canadians don’t buy higher-priced Denon gear because we lack the opportunity. If it’s not available locally to hear, see, and touch, what incentive does anyone have to buy it? If people outside Japan could see the PMA-SX1 Limited and DCD-SX1 Limited, I’m sure some of them would snap them up, and that might convince Denon to produce even more high-end gear for worldwide sale. 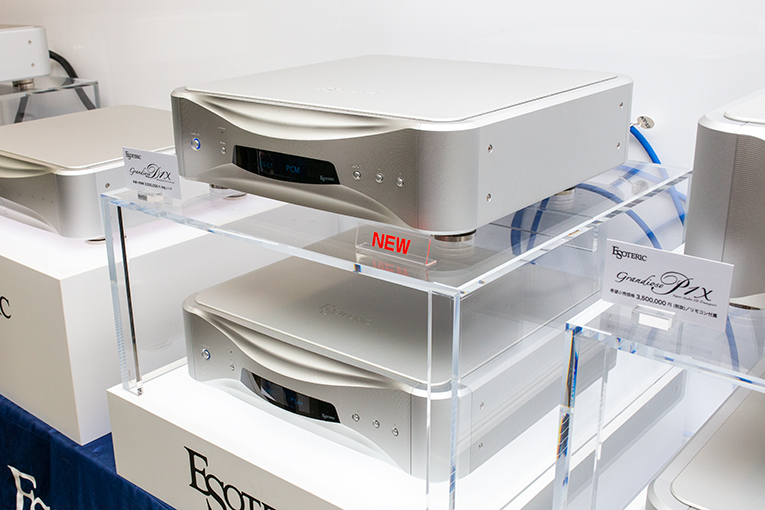 It was the D1X that particularly caught my eye, not necessarily for what it looks like, but for what it is and what’s inside. Yes, these really are monoblock DACs -- two boxes, one for the left channel, one for the right, for complete channel isolation. Inside each one is Esoteric’s proprietary Master Sound Discrete DAC architecture, installed on a honkin’-big circuit board, and that’s really what impressed me -- I’m tired of seeing DACs priced in the tens of thousands of dollars that use off-the-shelf chipsets that you’d find in DACs priced only in the hundreds or low thousands. I know there’s more to a DAC than the chip it’s based on, but c’mon -- when it costs so much, shouldn’t there be more that denotes it as special? 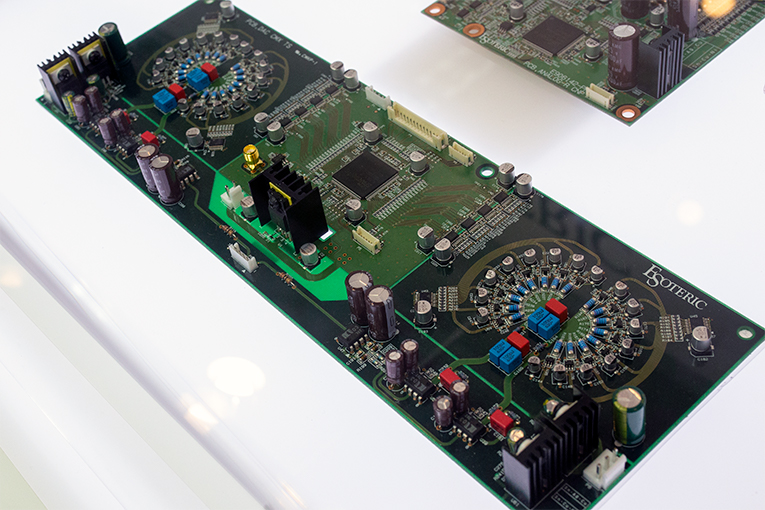 Esoteric’s Master Sound Discrete DAC architecture is an elaborate proprietary design that Esoteric says operates with 64-bit precision -- which, they say, is “the highest in Esoteric history, reducing digital rounding error to an absolute minimum in order to enable the faithful reproduction of the subtlest of textures.” MQA decoding is supported, and there are circuits to convert lower-resolution signals up to resolutions of 32-bit/768kHz PCM or 22.5MHz DSD. (Those maximum resolutions are supported only via USB.) I’d like to see our Howard Kneller, who owns Esoteric electronics, review the Grandioso D1X mono DACs -- he loves statement-level gear.

TechDAS exhibited what they claim to be the state of the vinyl-playing art -- the massive and, by all rationale measures, completely over-the-top . . . 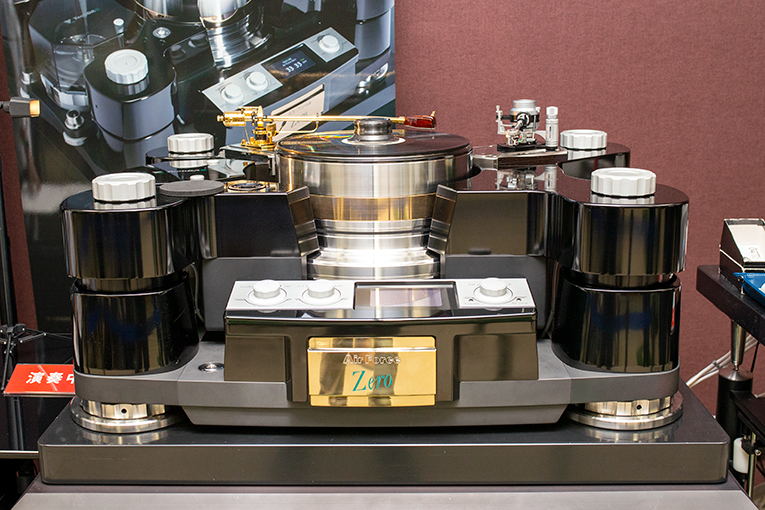 . . . Air Force Zero turntable. It costs ¥50,000,000 with tungsten platter, but “only” ¥45,000,000 with titanium platter. Those prices do not include a tonearm and cartridge, but they do buy you three external cases, each containing a power supply and at least one air pump. One pump floats the platter, and another the motor’s rotor and flywheel; a third pump sucks the record down onto the platter, while a fourth is for the ’table’s suspension system. The turntable itself weighs 727 pounds. The Air Force Zero’s other features are too numerous to mention. TechDAS claims that, to come up with the Air Force Zero, they set “no limitation” on their designers -- this was literally cost-no-object turntable design. 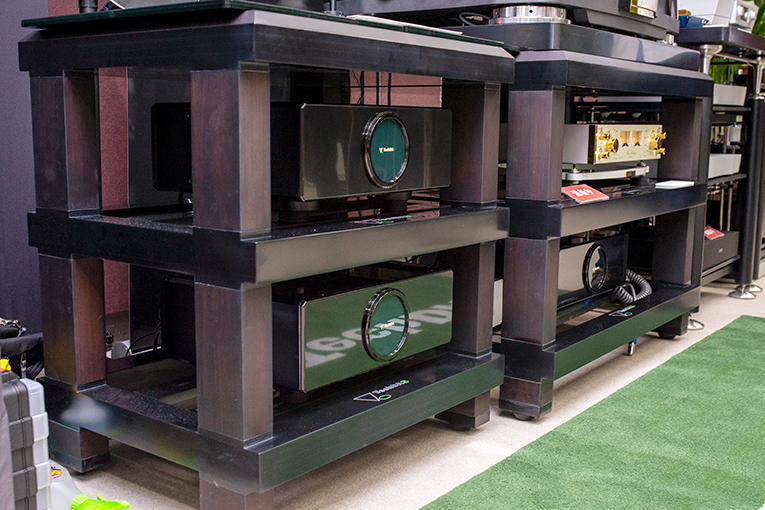 I admire the extreme effort put into such a design -- as well as the balls it takes to produce something of this size, weight, and price. Japan isn’t known for producing the biggest, most expensive audio components -- there, sensibly priced components of average size are the norm -- but clearly, no one has told TechDAS. That said, I wouldn’t necessarily want the Zero in my home, nor do I think many Japanese will want it, given the general small size of their homes -- but somewhere, someone who can afford it surely will.

Hands down, my favorite product of TIAS 2019 was the Accuphase A-48 stereo power amplifier, a class-A design specified to produce 45Wpc into 8 ohms (¥680,000). That output might seem low, but Accuphase claims that the A-48’s continuous output quadruples to up to 180Wpc into 2 ohms, and up to 360Wpc into 1 ohm with typical music signals. If you want even more power, you can bridge two A-48s for use as monoblocks, in which case the power output basically quadruples, though they don’t recommend driving a pair of A-48s into 1 ohm this way. (They claim 720W into 2 ohms for music signals, but that’s as low for impedance as they go.) The specified signal/noise ratio is 117dB at the Max gain setting, or 122dB at the -12dB setting, and the damping factor is 800 (though no frequency or frequency range is specified) -- all of these specs are usefully high. 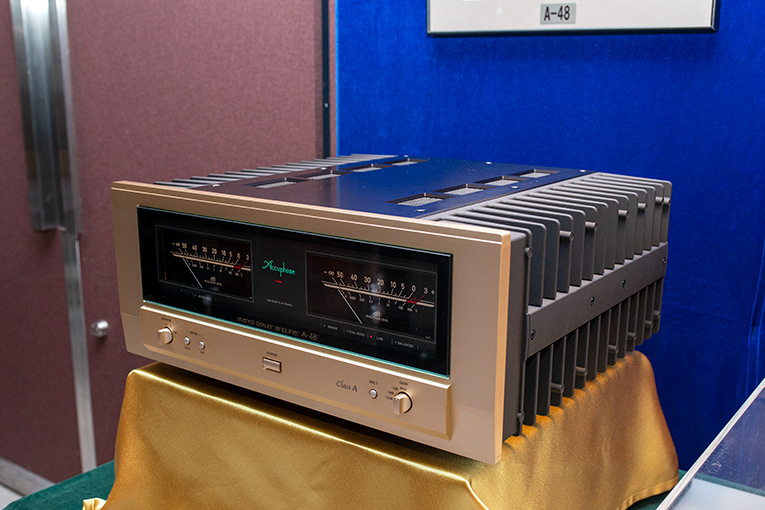 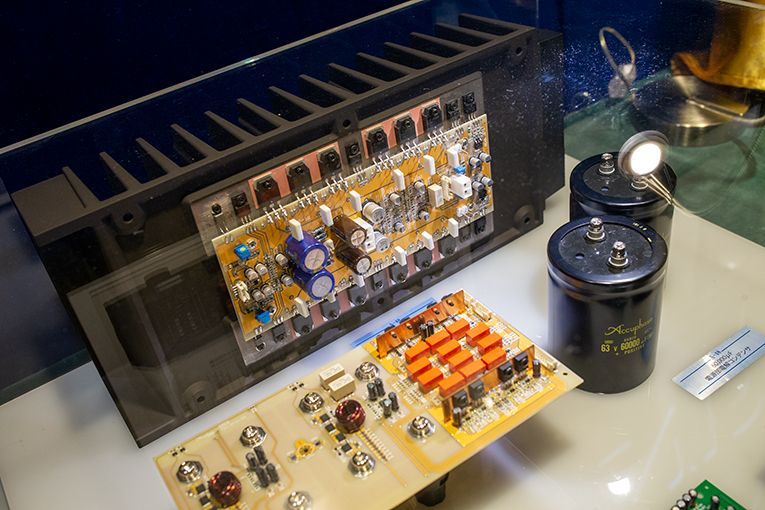 Accuphase has a sterling reputation for build and sound quality, and the A-48 looks as if it would be pretty darn close to the ideal power amp -- and for a reasonable price. The only disappointing thing: While Accuphase products are readily available in Japan, and I’ve seen them in Europe -- on a trip last month to the Netherlands, I saw some in a hi-fi shop in Rotterdam -- I rarely see Accuphase showcased anywhere in North America. I don’t know why. They have distributors in the US, Canada, and Mexico, but their low-key approach seems almost a deliberate effort to keep themselves under the radar. Too bad -- the A-48 is something I’d definitely like to review.

I love everything about the Tokyo International Audio Show: the show itself, the fabulous city it’s held in, the plethora of restaurants -- and Japanese toilets, both private and public. (Anyone who’s been to Japan knows that the toilets are wonders to behold.) I’ve attended a TIAS every three years since 2013 -- will I wait until 2022 for my next visit? I hope not -- TIAS 2019 was so good, I definitely want to be there next November for TIAS 2020. Check in 11 months from now . . .