Paul Barton, founder and chief designer of PSB Speakers, has been designing speakers of all shapes and sizes since 1972. That wealth of experience shows in the company’s latest offerings: the Synchrony T600, a floorstander priced at $7999/pair (all prices in USD), and the Synchrony B600, a standmounted design priced at $2499/pair. Optional stands for the B600 are available for $599/pair. Diego Estan reviewed a pair of B600s on this site last month and advised that readers shopping for standmounted speakers “absolutely must audition a pair of PSB Synchrony B600s,” because when they do, they’ll likely “see no reason to keep searching.”

The B600 measures 15.5″H × 9″W × 11.7″D, weighs 23 pounds, and is available in Satin Walnut or High Gloss Black finishes. The B600’s cabinet is primarily constructed from MDF, though the front baffle is covered by a full-height sheet of anodized aluminum that surrounds the drivers, while the backside features a smaller, matching aluminum panel that surrounds the bass port and binding posts. There are four IsoAcoustics footers on the bottom of the cabinet, which help to limit vibration transfer from the speaker to the surface it’s placed on. Diego’s review pair came in the High Gloss Black finish, and he thought that the B600’s appearance was “attractive and stylish,” and that its build was “first-rate.” 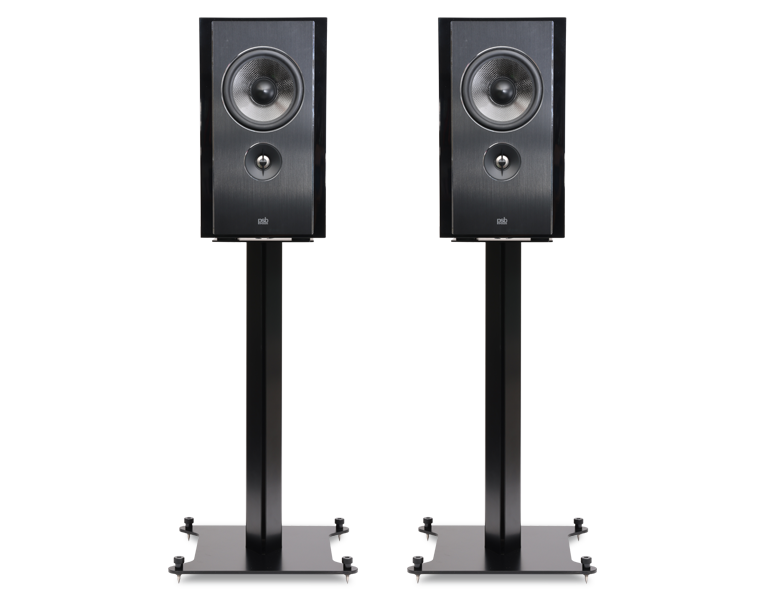 On the front baffle are a 6.5″ midrange-woofer with a woven carbon-fiber cone and a 1″ tweeter with a titanium dome. The drivers are positioned with the midrange-woofer above the tweeter—an arrangement that Diego called “a PSB hallmark.” With the tweeter so low on the baffle, some listeners may think that the speaker has to be raised very high to bring the tweeter to ear level, but in his review, Diego explained what he learned from Paul Barton: “the ‘acoustic center,’ or ‘listening axis,’ of the B600 is not at the tweeter height but 12″ up from the bottom edge of the cabinet, so a little bit above the midrange-woofer’s dust cap. . . . When the speaker is placed on a 24″ stand, the listening axis ends up about 36″ from the floor, which is a typical ear height for someone sitting in a listening chair.”

Diego set the B600s up on the matching stands supplied by PSB and powered them with his McIntosh Laboratory MC302 power amplifier via 12-gauge speaker wires he made himself. For comparison, he used a pair of Revel M126Be standmounts, which, at $4400/pair, are priced about 75% higher. The M126Be was reviewed by Philip Beaudette in August 2019 and was presented with a Recommended Reference Component award in October 2019. It, too, has a 6.5″ midrange-woofer and a 1″ tweeter, though its midrange-woofer has an aluminum cone and its tweeter has a beryllium dome, and the two drivers are placed traditionally on the front baffle, meaning that the tweeter is above the midrange-woofer. 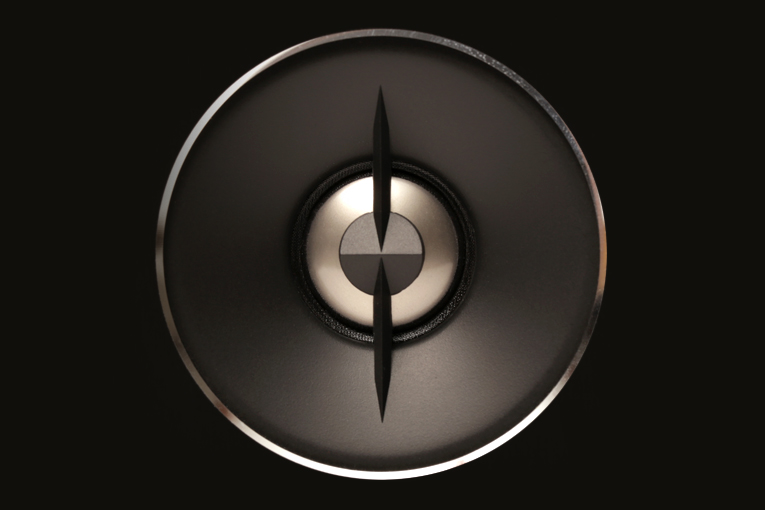 Beginning his listening with Bonnie Raitt’s “I Can’t Make You Love Me,” from Luck of the Draw (16-bit/44.1kHz FLAC, Capitol Records), Diego was able to determine that, tonally, “nothing seemed off with the B600s,” and that “they sounded like well-balanced, neutral speakers” with next to nothing to criticize. But it was when he played The Weeknd’s “I Feel It Coming,” from Starboy (16/44.1 FLAC, Republic Records), that Diego discovered one of the B600’s strengths—its ability to produce very deep bass for a speaker of its size and driver complement. Diego wrote:

I turned the volume up slowly until I hit 95–100dB peaks (SPL, C-weighted)—and the PSBs didn’t break a sweat. The bass thumps underpinning the track were seriously punchy, to the point where I could feel them in my stomach. When bass notes would linger in the track, the PSBs kept pace with them and really surprised me, because I could “feel” the decays in the bass line viscerally. Impressed by this, I investigated with an in-room averaged frequency-response measurement using my calibrated miniDSP UMIK-1 microphone and the REW (Room EQ Wizard) software on my Surface Pro. I measured an astonishing -3dB point (relative to 2kHz) of 25Hz. As a matter of comparison, most two-way standmounted speakers based on a 6.5″ midrange-woofer that I’ve measured in the same positions in my room yield -3dB points around 32–35Hz.

Other tracks Diego played confirmed the B600s’ stellar bass performance in his room. These tracks also brought out other strengths, such as the speaker’s ability to reveal extreme detail yet still sound pleasurable. For example, playing R.E.M.’s “Nightswimming,” from Automatic for the People (24/192 FLAC, Craft Recordings/Qobuz), Diego heard the following: “The opening bars played on piano, positioned center-right, had weight, authority, and definition. The leading edges of the notes sounded neither ringy and strident, nor soft and ill-defined. When singer Michael Stipe’s voice enters, flying high above the speaker plane, taking center stage above and to the left of the piano, the PSBs revealed every nuanced intonation captured in the recording and positioned the sonic image perfectly within the soundstage.” He also described the song’s string instruments and how they were “beautifully reproduced by the B600s, with convincing bite, but without ever sounding hard.” 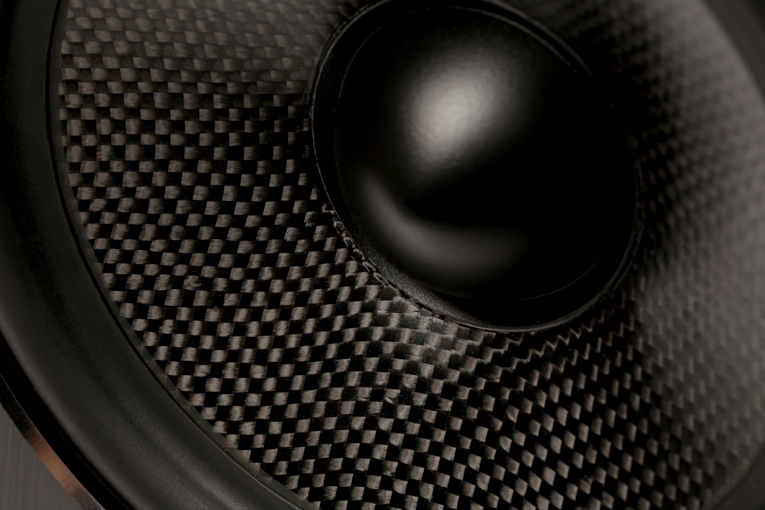 When Diego compared the two standmounts, he quickly learned that the “PSBs easily outclassed the Revels in terms of bass extension, and also had slightly more impact and punch in the midbass region.” He also wrote that, to his ears, “the rest of the frequency range was close to identical for both pairs of speakers,” though there were small sonic differences. For instance, when he played Bonnie Raitt’s “I Can’t Make You Love Me” again, he determined that the “Revels might’ve exhibited a hair more sibilance than the PSBs on Raitt’s S sounds on the track, with the PSBs delivering a more relaxed sound.” He also thought he “heard more nuanced microdetail . . . in the cymbal crashes through the Revels”—but also added that he was “splitting hairs.”

Similarly, when Diego compared imaging, he concluded that it was “a draw, with both speakers chiseling out very specific aural images in and around the soundstage.” But he noted that where the Revel M126Be standmounts “earned their bump in asking price” had to do with transparency, which he defined as “that feeling that individual sounds produced by the speakers don’t sound like they are coming from an electromechanical device in a box, but rather as if they’re floating freely in the air, without any cabinet sounds (i.e., resonances, vibrations, etc.), no matter how subtle, to blur or detract from the listening experience.” 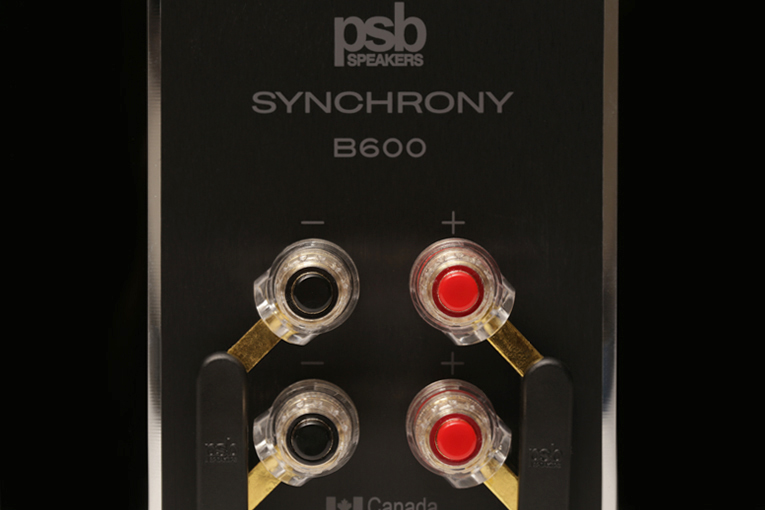 Throughout the various tracks Diego played, he thought the Revels sounded ever so slightly more transparent than the PSBs. For example, when he listened to “I Can’t Make You Love Me,” he found that “the three-dimensional sonic ‘bubbles’ containing each soundstage image floated with a little more freedom, and with a greater sense of delineation and solidity, when played back through the Revels.” And with Michael Bublé’s “Help Me Make It Through the Night,” Diego said that he “heard the same small gap in transparency in favor of the Revels with the opening guitar plucks, as well as with Bublé’s and Allred’s vocals.” But he also added: “This track has strong and impactful bass, which is where the PSBs had a definite advantage over the Revels.” Overall, given the very slight differences between these two fine standmounts, the PSB B600 represents significantly better value for money. 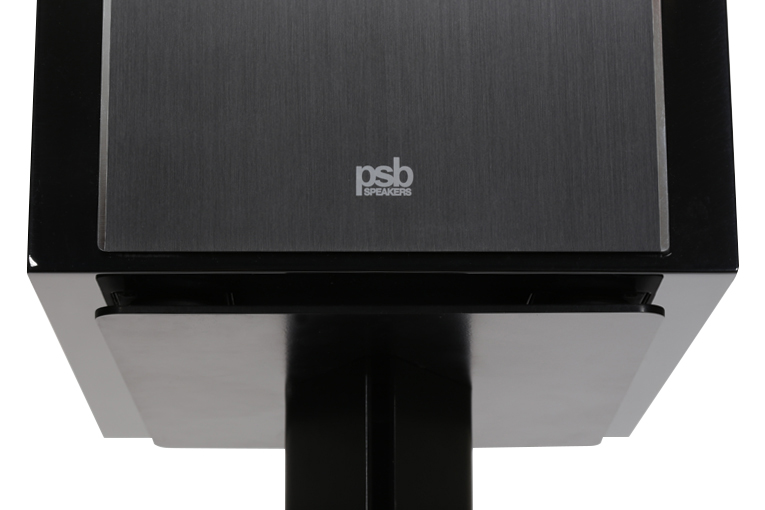 Diego wrapped up his review by asking the question: “What’s not to like about the PSB Synchrony B600?” His answer was “nothing,” and Diego added that the B600 “is one of the most complete-sounding small speakers” he’s ever heard. As a result, the B600 was presented with a Reviewers’ Choice award at the time of his review for its outstanding sonic performance—and that’s also why the B600 is being recognized as a Recommended Reference Component this month.