Bryston’s reputation in the hi-fi industry is legendary. Their electronics, which are used in both the professional and consumer markets, are relatively affordable and are known for excellent build quality, exceptional reliability, and warranties second to none: 20 years for any “analog” component (i.e., power amplifiers, preamplifiers, and integrated amplifiers). Bryston also receives near-universal praise for their components’ outstanding sound quality -- sound so good that they’re often held up as benchmarks against which other like- and higher-priced components are judged. An ideal example is the 4B SST2 power amplifier, which outputs up to 300Wpc into 8 ohms, sounds spectacular, and costs $4995 USD. It received a Reviewers’ Choice award when it was reviewed in July 2009, a Product of the Year award at the end of that year, and recognition as a Recommended Reference Component in January 2011 -- and it’s still current today.

The latest Bryston product to follow that familiar path of praise, recognition, and awards is the successor to their popular B100 integrated amplifier: the B135 SST2 integrated amplifier. Philip Beaudette, who owned a B100, reviewed the B135 SST2 very positively in September 2013, which resulted in it receiving a Reviewers’ Choice award. At the end of the year, the B135 SST2 also received a Product of the Year award, based mostly on the accolades in that review. But Philip’s biggest compliment was this: He bought a B135 SST2 to use as his reviewing reference, partly for its build quality and reliability, but mostly because its neutral, transparent, revealing sound was even better than the B100’s: “My first impression was that the B135 was even quieter than its predecessor. The B100 already had a low noise floor, so it wasn’t as if the B135 were removing some sort of background haze. Rather, I could hear things such as the decays of piano notes a bit more clearly, and found myself focused on more subtle details, such as the sound of a player’s hand moving along the fretboard of an acoustic guitar. Although it still had much in common with the sound of the B100, the B135’s sound was more transparent, which helped improve on some of the B100’s already impressive strengths.”

Philip was also taken aback at how transparent and revealing the B135 SST2 was: “The B135 could quickly change color to reproduce the character of a given recording, whatever it might be. ‘Girl Called Alex,’ from Kurt Vile’s latest gem, Wakin on a Pretty Daze (CD, Matador OLE-998-2), has an almost washed-out quality. Its soundstage was also a bit recessed, but what first drew my attention was the warm, soft punch of the kick drum. That drum is a bit buried in the mix, which lessens some of the kick in its tone -- this track is not rich in detail. Differences in recording styles, such as those on the Portishead [Third (CD, Mercury 0251766400)] and Vile albums, were very clear through the B135, whose neutrality was a great tool for evaluating what the engineers were trying to achieve. It’s no coincidence that Bryston products have been used in recording studios since the company’s inception.

“Dirty Three and Low’s version of ‘Down by the River,’ from the two bands’ In the Fishtank 7 (CD, Konkurrent LC6110), is one of my favorite cover tracks, in no small part because their minimalist arrangement is about 180° apart from Neil Young’s rock-anthem original. Not only is the idea amazingly executed, it’s wonderfully captured on this recording -- the studio’s cavernous sense of space, the clear reverberation of the instruments, and the sorrowful singing are presented against a brilliant black backdrop that emphasizes the song’s mood. The B135 shone with this recording -- its outstanding transparency let me hear deep into the mix and easily picture the musicians as they slowly work to build the piece until, six minutes into this 9:37 track, Mimi Parker’s crooning voice finally enters. The ‘air’ around the musicians was clearly audible, lending this recording a great sense of openness. I find this performance intoxicating; through the B135 SST2, it was sublime. It doesn’t get much better than this.” 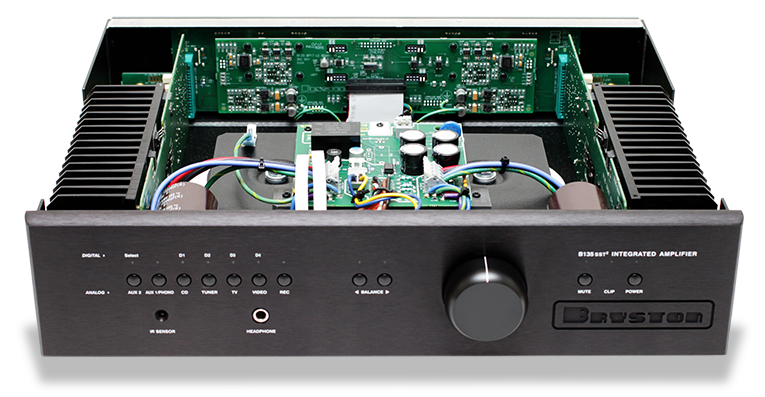 In a reviewer’s system, sufficient power output is a prerequisite to ensure compatibility with a variety of speaker types. Here, too, Philip’s review was full of praise: “Two other important facets of the B135’s sound were its powerful bass and effortless dynamics. Having owned a B100 for several years, I’ve come to expect these qualities from Bryston gear, but if you haven’t heard them before, you’ll be impressed with the B135’s sheer authority. With the title track of Killer Mike’s R.A.P. Music (CD, Williams Street 384-460-018-2), the B135 delivered tight, potent, pounding synthesized bass that, propelled by the beats of Brooklyn-based producer El-P, sounded upfront and unapologetic -- an aural assault from one of my favorite hip-hop albums of last year.”

Like Bryston’s other models, the B135 SST2 is modestly priced for a high-end hi-fi product. That might lead some to believe that B135 SST2 is merely “good for the price.” It’s a lot more than that. The B135 SST2 is a great integrated amp -- another reference product from Bryston against which others can be judged. Philip explained it well in the wrap-up of his review: “With the B135 SST2, Bryston has succeeded in setting a new standard for the level of performance that can be expected at this price. You’ll have to spend significantly more to improve on the B135’s sound, and even so, those improvements are likely to be small. On these grounds -- and because it sounds so darn good -- Bryston’s B135 SST2gets my highest recommendation.” Ours too.