Shunyata Research has been manufacturing its highly regarded power products for over 20 years. And while the Poulsbo, Washington, company is known for its power cords and Hydra power distributors, it also manufactures a full suite of cables and accessories. Shunyata’s products are not cheap: the entry-level Venom line of audio cables has prices starting at $450 and ranging up to $1000 (all prices in USD). However, all of its products utilize some or all of Shunyata’s many proprietary technologies and are assembled by hand at the company’s facility in Poulsbo.

So when Grant Samuelson, Shunyata’s sales and marketing director, contacted me about reviewing products from the new Venom-X line, I assumed they would be upgraded (and much more expensive) versions of the original Venoms, which would then be discontinued. But according to Samuelson, Shunyata has expanded its offerings to include a line which has a similar performance to its premium products, but at a more modest price point. The entry-level Venom line is still available, and the new Venom-X line is positioned at a slightly higher price point while employing more of Shunyata’s proprietary technologies. I was intrigued, and settled on a pair of Venom-X speaker cables that retail at $1995 for a standard 2m set.

While Shunyata employs many core technologies in the design of its cables, there doesn’t seem to be a common aesthetic, apart from the exceptionally wide girth of its ultra-high-end power cords. That’s not necessarily a bad thing; perhaps it means the products are designed to meet specific design goals and to maximize performance rather than conform to some visual standard. Whatever the case may be, the Venom-X speaker cables are sturdy but not overly thick, and relatively flexible; the blue, woven outer sheath provides a clean, if not luxurious, look. The positive and negative wires are gently twisted around one another; a cylindrical black-plastic collar at each end prevents them from unraveling, and keeps things neat and symmetrical. 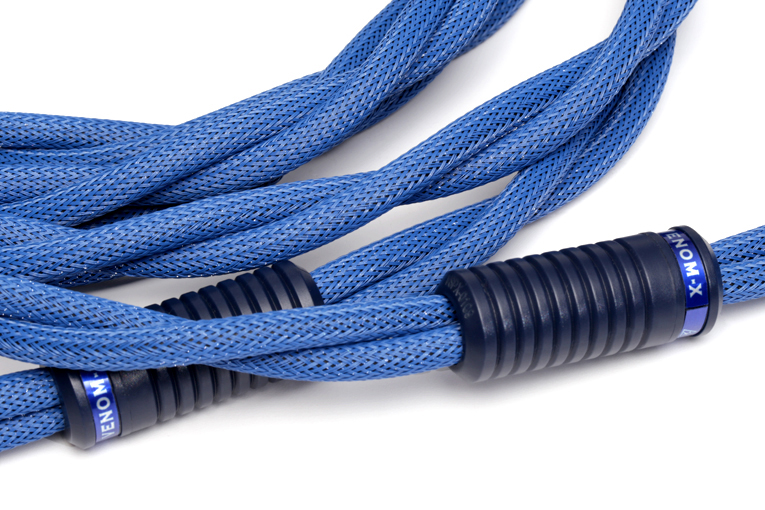 The 8-gauge conductors are made of oxygen-free copper Alloy 101, also known as OFE or C10100 copper, which is at least 99.99% pure and has a conductivity rating of 101% IACS. The individual strands of the conductors are arranged in Shunyata’s proprietary VTX conductor geometry; shaped into a virtual tube that is said to reduce skin effects and random eddy currents. Although Shunyata does not specify the exact type of material used for the dielectric that surrounds the bundle of conductors, it is said to be a fluorocarbon. Each cable is conditioned for four days by Shunyata’s ‌‌Kinetic Phase Inversion Process, a proprietary method claimed to eliminate the need for burn-in or cryogenic treatment.

The cables are finished with Shunyata’s STIS v3 interchangeable terminal system. The set I received was terminated with banana plugs that provided a snug fit, but spades are also available; the ends can be swapped by simply removing a set-screw. The terminals are made from tellurium copper and coated with gold to protect them from oxidization. The main body of each terminal is covered with colored shrink-wrap and marked as “+” on black or “-” on gray. There are also markings for “AMP” or “SPK” on the shrink-wrap at either end of the cables. The overall look of the cables is workmanlike rather than flashy, but they are quite sturdy with a high level of fit and finish.

I don’t pretend to understand how all of Shunyata’s proprietary technologies work, and the company is pretty tight-lipped in its descriptions of some of them, so I take the claims with a grain of salt. However, Caelin Gabriel, the company’s founder and chief designer, is a former research scientist for the US military who has worked on ultrasensitive data acquisition systems. And Shunyata’s products are not just for audiophiles; they have even been used to improve the performance of medical imaging systems by reducing noise. 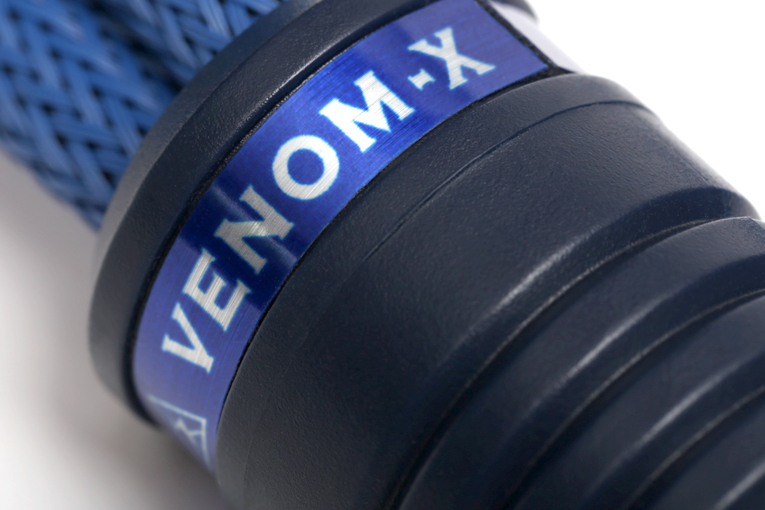 In addition to the speaker cables, the Venom-X line comprises RCA and XLR interconnects; a phono cable with ground; a power cord; and RCA and BNC S/PDIF, XLR AES/EBU, USB, and ethernet digital cables.

I used the Venom-X speaker cables in my reference system with a pair of MartinLogan Masterpiece Classic ESL 9 loudspeakers, Anthem M1 monoblock amplifiers, and an Anthem STR preamplifier. The preamp runs Anthem’s ARC Genesis room-correction system. The rest of the system comprised an Intel NUC computer running Roon and Tidal, connected to the STR preamp via AudioQuest’s JitterBug jitter reducer and Carbon USB link. Accessories consisted of my usual assortment of cables from Analysis Plus, and power cords and power-conditioning products from Essential Sound Products, Zero Surge, and Blue Circle Audio.

With the Shunyata speaker cables plugged into my system, the first thing I noticed was that there was little difference to the sound compared to my reference Analysis Plus Silver Apex cables ($3779.99 per 6′ pair with WBT-0610 banana plugs). The presentation was still extremely clear, with a fast and transparent sound, and deep, yet highly articulate bass. I did allow the new Shunyatas to settle in for a few days before I did any critical listening, but I did not perceive any significant changes to the sound during or after that time. 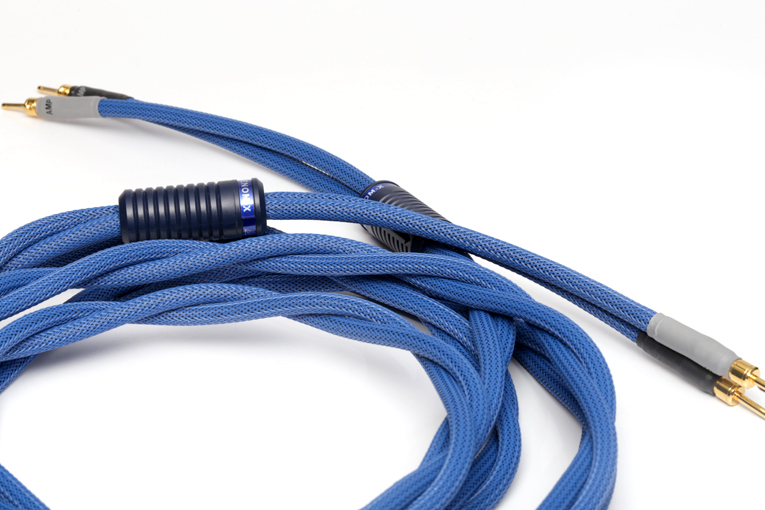 Listening more carefully after the Shunyata speaker cables had been in my system for a few days, and then over many weeks, I was impressed at how they brought out all of the complex details in recordings without coloring the sound in any way. The multiple, steely guitars on Cyndi Lauper’s acoustic version of “True Colors” from The Body Acoustic (16-bit/44.1kHz FLAC, Epic / Daylight / Tidal) sounded crystal-clear without a hint of harshness, and the emotive bowing of the cello remained warm and inviting throughout the track. Lauper’s close-miked voice is quite dynamic and can be overpowering, but with the Shunyata speaker cables in the system, the reproduction bent, but never broke. Even when she hit the peaks in the chorus, her sibilants were kept in check; yet her voice maintained a powerful and unrestrained quality. The guitars on “She Bop” had exceptional clarity, and were placed exactingly to hard left and hard right, with an additional guitar placed just to the right of center. The haunting whistling halfway through the song started left of center, spreading diffusely to the outermost edge of the left speaker and back to the center of the soundstage. It floated dreamily behind the vocals with soft and gentle imaging that the guitars cut through with stark immediacy.

Adam Cohen’s “Love Is” from We Go Home (16/44.1 FLAC, Rezolute / Tidal) was big and energetic, and the alternating foot stomps and handclaps sounded realistic and extremely dynamic. When the other instruments joined the piano, deep rich bass filled my entire room, while Cohen’s voice remained solidly and clearly centered in front of the music. Even though the sound is very dense on this track, each element was clearly articulated; there was no wooliness or smearing of images. On the more sparsely arranged “Song of Me and You,” Cohen’s voice was placed slightly more forward in the soundstage than I had heard in my system before introducing the Shunyatas. This meant it played a more prominent role, and provided an intimate portrayal of Cohen’s performance while still maintaining a natural balance between the vocals and the instrumentation.

The mostly acoustic music I had played sounded excellent through the Venom-X speaker cables, but would the fast and neutral character of the Shunyatas suit something more dynamic? To find out, I turned to Madonna’s EDM remix album, Finally Enough Love: 50 Number Ones (24/44.1 FLAC, Warner / Tidal). It sounded equally impressive. The pounding beat of “Bitch I’m Madonna (Sander Kleinenberg Video Edit),” mixed with the dizzying reverb of the synth effects and the vocals of Madonna, Nicki Minaj, and the backup singers, was intoxicating in its clarity and power even at club-approved volume levels.

My experience of listening with the Shunyata Venom-X speaker cables over many weeks was notable for the lack of any noticeable deficiencies when playing back all manner of music. And having enjoyed their performance in my system for an extended period, I did some direct comparisons with my reference Analysis Plus Silver Apex speaker cables. Playing back Madonna’s recent remix collaboration with Sickick, titled “Frozen On Fire” (24/44.1 FLAC, Warner / Tidal), the sonic images were ever so slightly sharper and clearer with the AP cables, even though the soundstage wasn’t quite as wide. Sickick’s vocals were more intelligible; when he says, “I’m alright, I’m poppin’ molly,” the M in molly sounded noticeably more distinct. And even though everything sounded clearer, Madonna’s and Sickick’s voices were placed more closely together, as were the percussion and bass beat, and all were placed nearer to the center of the soundstage. Switching back to the Shunyatas, not only did the soundstage expand in width, but the reverb of the vocals stretched a little further behind the speakers; however, the throbbing bass, while still very deep and satisfying, was slightly less well defined. 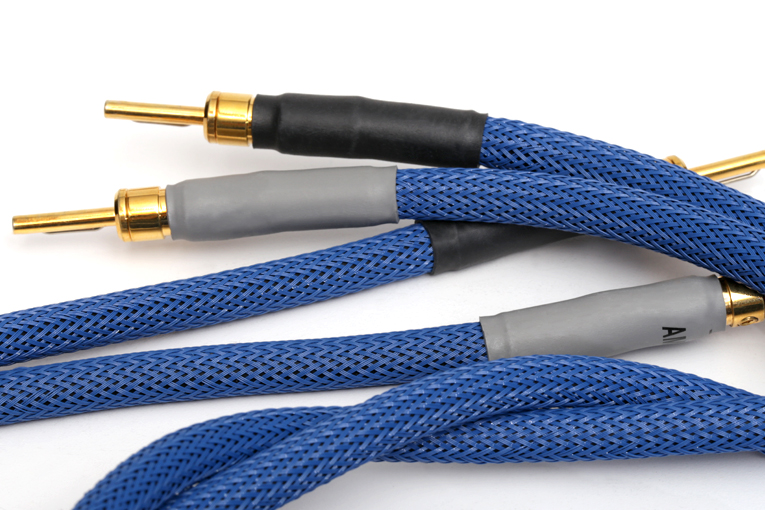 The AP cables presented the horns on “Raiders March,” from John Williams: The Berlin Concert (24/48 FLAC, Deutsche Grammophon / Tidal), with a clearer, brassier quality, and I found it easier to discern the various forms of percussion in the background. I could almost picture the cymbals, and easily detected the vibration of the snare drum placed at the back of the orchestra; and each of the varying beats on the timpani sounded slightly different. With the Shunyatas, the soundstage was again a little wider; however, the placement of the various sections of the orchestra and the acoustic space between them was roughly the same with both sets of cables. I did not experience an increase in the space between the images with this recording as I had with the voices and instruments on “Frozen On Fire.”

In the product literature, Shunyata claims: “An integrated Venom-X system of cables delivers performance that rivals any other [state of the art] cable system—often at less than one-quarter of the cost.” I’m not sure what the cumulative effect of using Venom-X cables throughout my system would be, but the speaker cables certainly performed admirably. I’m also not sure what speaker cables costing four times as much as the Venom-X pair would sound like in my system—but the Venom-X cables provided a slightly different, but similarly accomplished performance overall to the almost-twice-the-price AP Silver Apex pair.

Venom-X speaker cables aren’t cheap, but as Shunyata claims, they provided performance beyond what I would expect from the fairly modest price (by high-end standards); they compared quite favorably with my more expensive reference cables. So if you have made a significant investment in a high-end audio system, the Venom-X could be just what you are looking for in a speaker cable, and at a price that is lower than what you might expect to pay for its level of performance.