Value can be a loaded word. Mention value to audiophiles and you’ll get a whole slew of different opinions. What’s considered value to one is outrageously expensive to another, depending on income, budget, and preference. However, in these post-financial-bubble times, all but the most well off are looking to get a bit more for their hard-earned dough. This is where Wolfgang Meletzky stepped in.

As the founder and former owner of the German manufacturer MBL, as well as the company’s chief designer, Meletzky may not at first glance have seemed to be the person to achieve this. Best known for the Radialstrahler loudspeaker and topnotch electronics, MBL had earned a reputation for making very expensive products with excellent sound and elegant finishes. However, while proud of his achievements, Meletzky began to feel that MBL’s components were becoming luxury products that most potential customers couldn’t afford, and that he was spending too much time in management. So, seeking a new challenge, Meletzky sold MBL and, in 2005, founded Music Culture Technology GmbH, with the goal of creating audio gear that produced extraordinary sound at much lower prices. While not exactly budget equipment, Music Culture’s offerings, designed and produced in Berlin, are not priced in the stratosphere. Like MBL, MC offers a full range of components, from sources to amplifiers to loudspeakers. One of them is the Elegance MC 701 integrated amplifier ($4495 USD).

The Elegance MC 701 runs in pure class-A up to 10Wpc, and thereafter in class-AB. The design principles followed include symmetrical grounding and short signal paths for the highest performance possible.

I spent some time talking with Wolfgang Meletzky on the phone to get a better feel for the thinking that had gone into the design. According to him, the MC 701 is built as two power amps, each in its own well inside the main chassis. The transformers are directly bolted to the base of the chassis to minimize resonances. The preamp section is decoupled from the power-amp section and has its own separate transformer. Meletzky said that all gain stages are truly DC coupled, so that there is no phase shift with low-frequency signals. Transistors are mounted on a separate metal bar, then connected to the external heatsinks. This is done so that the bar heats up first, thereby reducing the amount of heat transferred to the heatsinks and increasing thermal efficiency.

With a claimed power output of 120Wpc into 8 ohms or 185Wpc into 4 ohms, the MC 701 should have no problem driving most loudspeakers. Its channel separation is specified as 90dB, and its signal/noise ratio as 111dB unweighted and 115dB A-weighted. MC claims that the MC 701’s total harmonic distortion (THD) is less than 0.006%.

While not as fancy looking as MBL products, the MC 701, like the other Elegance models, is quietly, um, elegant in either its black or its silver finish. It measures 18”W x 5.7”H x 16”D and weighs 37 pounds -- relatively lightweight compared to most integrated amps I’ve reviewed. The front panel is beveled on the upper and lower edges; its central, vacuum-fluorescent display indicates both the volume level and the selected input. The display is flanked on each side by five buttons: for the various input selections, external processor/preamp bypass, mute, and brightness. Two buttons below the display, on the lower bezel, adjust the volume. Each side panel is a massive array of heatsink fins, which fortunately aren’t very sharp, and never became more than warm during my time with the MC 701.

At each end of the rear panel is a pair of sturdy five-way binding posts, and in the lower-right corner is an IEC power-cord inlet. In the center is a pair of XLR inputs, six pairs of RCA inputs, and one pair of RCA outputs. The MC 701 sits on four aluminum-and-steel feet for good isolation from external vibrations.

Supplied with the Elegance MC 701 is a metal remote, which not only controls the volume and input selection, but is also capable of controlling the matching Elegance MC 501 CD player. Compact and comfortable, the remote fits easily in the hand despite its chunky design.

My review sample of the Elegance MC 701 had already logged some hours of use before it arrived at my home, so no burn-in time was required. Perhaps that had something to do with the fact that, unlike most other amps that I’ve had in my system, which have taken some time for me to get a feel for their sound, the MC 701’s character was immediately apparent. Much like the last integrated amp to grace my system, the ASR Emitter I, the MC 701 was incredibly transparent, though maybe not quite as quiet as the ASR. That perception really didn’t matter, given the Music Culture’s clarity -- the music was cleanly delineated, with no sonic grunge or veiling of details. Although I don’t much care for electronica or Nine Inch Nails, after seeing The Social Network I fell in love with Trent Reznor’s and Atticus Ross’s original music for the film (16/44.1 AIFF, Null), and this recording has been in heavy rotation ever since. The music is chock-full of interesting melodies, colors, and hauntingly beautiful textures (even my 66-year-old mom loves it), and the MC 701’s clarity enhanced the music’s ghostly, mysterious nature by allowing all the textures and details to emerge and expand against the blackest of backgrounds.

Equally impressive was the depth and width of the soundstage. This was particularly apparent with classical music and live jazz recordings, resulting in a convincing illusion of being present at a live event, especially with recordings of small jazz ensembles. Jessica Williams’ Live at Yoshi’s, Volume One (16/44.1 AIFF, MaxJazz) is among the best-recorded albums I’ve heard, with sound that rivals that of high-resolution recordings. In “Heather,” her trio sounded positively lifelike in this intimate setting. In addition to the palpable sonic images, Williams’ piano had a solidity and woody resonance, particularly in the lower registers, that only furthered this sense of realism. While Keith Jarrett’s Paris Concert (16/44.1 AIFF, ECM/HDtracks) was recorded in a far less intimate setting, the MC 701 captured that sense of being present at the venue, with remarkable reproduction of the hall’s acoustic even at lower-than-realistic volumes.

The MC 701 also ably conveyed all the drama and grandeur of large-scale symphonic works, handling dynamic contrasts and transient response with aplomb. While its reproduction of strings was quite lush, there was plenty of bite between the horsehair and the wire. This quality, and the ability to easily handle swings in dynamic contrast and transient response, were most notable during Claudio Abbado and the Berlin Philharmonic’s recording of Beethoven’s Ninth Symphony (24/96 AIFF, Deutsche Grammophon/HDtracks) -- room-filling sound poured forth effortlessly. For sheer grandeur and spiritual uplift, Aaron Copland’s Fanfare for the Common Man is tough to beat. When I listened to my favorite version, with Zubin Mehta leading the Los Angeles Philharmonic (16/44.1 AIFF, London), the MC 701’s reproduction of the timpani, and their decay and echo, were among the best I’ve experienced, and friends who shared the experience agreed. And when the brass fanfare began, it was absolutely spine tingling. 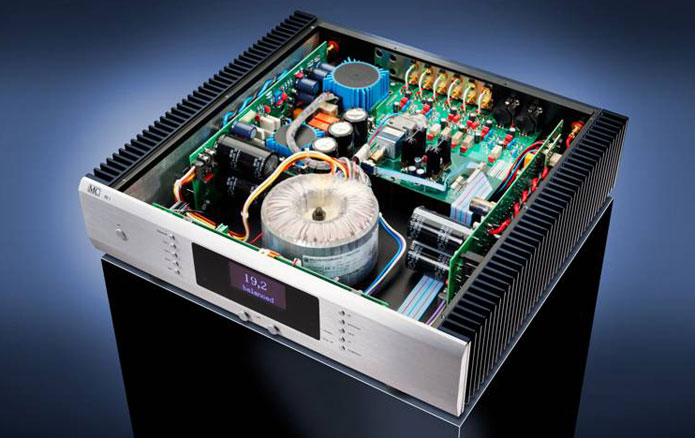 Since converting to a fully server-based system with my Logitech Transporter music server, Halide Design S/PDIF USB Bridge, and Sonic Studio’s Amarra software, I’ve found myself listening to a lot more rock’n’roll, a genre that my Wadia 830 CD player had no affinity for. As a result, I got to experience the tight-fisted control exerted by the MC 701 on the woofers of my Wilson Audio Sophias. When the bass finally kicks in following the opening lead of “Hammerhead,” from Jeff Beck’s Live and Exclusive from the Grammy Museum (16/44.1 AIFF, Atco), it was almost concussive -- the entire room reverberated, as if I’d added a subwoofer to my system. And in Steve Vai’s Where the Wild Things Are (24/96 AIFF, Favored Nations/HDtracks), Jeremy Colson’s kick drum was an insistent counterpoint to Vai’s guitar and, with some exceptions, was quite a bit punchier than I’d previously heard from this recording.

So the Elegance MC 701 was capable of brute-force bass. But could it groove?

Well, few bands groove better than Pearl Jam, and the MC 701 was happy to oblige them. Following the opening chords of “Even Flow,” from Ten (16/44.1 AIFF, Columbia/Legacy), when the band settles into a chugging groove, the MC 701 kept the pace with the dynamic shifts, preserving the song’s momentum and flow. Despite the high-volume jamming on this album, or on recordings by Soundgarden or Smashing Pumpkins, the MC 701 easily handled anything I threw at it without ever running out of steam or conveying any sense of strain.

As happened with the ASR Emitter I ($10,950), reinserting into my system my ten-year-old Jeff Rowland Design Group Concentra integrated amplifier ($5600 when available) took some getting used to. The overall sound was noticeably warmer, almost to the point of sounding murky. The Music Culture Elegance MC 701 was so much more transparent -- music sounded crisper and more clearly defined without sounding sterile. Both soundstage width and depth were clearly superior to the Concentra’s. Jeff Rowland has long had a reputation for achieving tube-like sound from solid-state electronics, and nowhere was this more apparent than in this comparison with the MC 701. Through the Concentra, leading edges sounded burnished, with a warmer glow, but at the expense of overall detail. Musical textures, such as the resonance of a double bass or the vibrato of a saxophone, were less distinct and less fully formed. Not only was the soundstage compressed in depth and width, the overall sonic picture also seemed recessed in comparison.

The sound of the MC 701 had more in common with that of the more-than-twice-the-price ASR Emitter I than with the Jeff Rowland Concentra. While the ASR had a little more top-end extension, the Music Culture came very close, and had better bass control, approaching but not quite equaling the bass control of the Luxman L-509u, the best I’ve heard in that area -- and, like the Emitter I, the Luxman costs more than twice as much as the MC 701.

I very much enjoyed my time with the Music Culture Elegance MC 701. Within days of its arrival, I was already plotting just how I was going to convince my wife that it was worth buying. It sounds better and costs less than my current amp! It sounds virtually as good as amps costing more than twice as much! I promise -- really promise -- that this will be the last amp I ever buy! Unlike many of my buddies, I have an understanding wife who tolerates my hobby. However, with a new home purchased in the last two years and a child in private school, she had to draw the line somewhere. You know where she drew it.

You may or may not have that problem, but if you’re in the market for a new integrated amplifier, I strongly urge you to consider the Elegance MC 701. It’s just that good. Even if you’re not in the market, check out this paradigm-shifting component, which achieves outstanding sound at a real-world price. Value just got redefined.