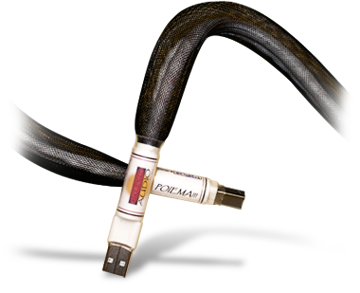 I used to make fun of the young kids who bought small Japanese coupes and sedans, then spent $5000 to $10,000 on wildly upgraded motors and suspensions. That is, until I saw Subarus and Mitsubishis keeping up with, and in some instances outrunning, a variety of Porsches at a local track day last year. It must have been more than a little disconcerting for the 911 owners who couldn’t pull away from a kid driving a secondhand four-door sedan.

And so it goes with audio gear. For those of us who can’t afford to replace a component with a more expensive counterpart, there is often a long list of accessories that allow us to maximize the sound quality of the gear we already have. Up until this point, owners of USB DACs have had few options with which to replace the generic USB printer cable that commonly accompanies such products. No longer.

Ridge Street Audio Designs is a relative newcomer to the market, but its creator and proprietor, Robert Schult, has been an audiophile and equipment enthusiast for the better part of 30 years. An avowed analog lover, Schult stated that, if told a few years ago he would be designing and distributing digital interconnects, he would not have believed it. With the proliferation of USB DACs, however, he believes that the gap in sonic quality between analog and digital sources is now narrower than ever.

The Poiema!!! R-v3 USB Digital Master USB cable is the entry-level offering from Ridge Street, but its price is anything but: $550 USD for a 1m run. This steep entry price comes with a 45-day money-back guarantee. The Poiema is built by hand using conductors of solid, high-purity silver, and utilizes Ridge Street’s proprietary CordLESS Cable Technology, which purports to significantly minimize dielectric distortion. This distortion reportedly can have a dramatic impact on the quality of the signal the source delivers to the DAC, resulting in a sound that is flat or sterile. Ridge Street also takes great care in manufacturing to avoid subjecting the conductors to any tension, which they say is critical to preventing fractures in the cable’s data line. The result of all this (explained in better detail on their website) is a cable that, Ridge Street claims, is "tonally balanced, vibrant, immediate, dynamic and tangible." Can a glorified printer cable really have that dramatic an impact on the quality of a system’s sound?

My initial desire to review a USB cable stemmed from having a system that tends toward a cool, analytical sound -- my hope was that whatever I reviewed would partially ameliorate that distinctly "digital" bent. My system is anchored by a pair of Dynaudio Contour 1.8 Mk.II floorstanding speakers, connected to a Krell KAV-300iL integrated amplifier with Transparent Audio Wave speaker cables. I run iTunes and Songbird off my Apple MacBook Pro, via USB cable, to a Benchmark DAC1 USB digital-to-analog converter. The DAC is connected to the Krell via a pair of AudioQuest King Cobra interconnects terminated with XLRs. All music used for the purposes of this review was encoded using Apple Lossless, except for the 24-bit/192kHz FLAC files available free from www.2l.no.

My Benchmark DAC1 is a fine piece of gear. It offers miles of resolution, and makes almost any source material sound sharper and clearer than it has any right to. With the right accompanying gear, I would even say it could compete with DACs many times its price. In my Dynaudio-Krell system, however, it left music sounding a little . . . dead. For all its strengths -- such as expansive soundstaging, unbelievably sharp transients, and a nonexistent noise floor -- it had always rendered voices and instruments as if they were two-dimensional, cardboard cutouts at various points in the soundstage. The Poiema!!! R-v3 USB Digital Master changed all this.

It was after midnight when I swapped out my stock USB cable for the Poiema, which I did with equal measures of excitement and skepticism. So long as the digital signal, composed of a great many ones and zeros, is transmitted intact from computer to DAC, what possible difference could the transmitting cable’s silver conductors and shielding have on the sound? And, indeed, my first listen with the Poiema was underwhelming. Perhaps I was expecting more dramatic and profound differences in the sound, such as a noticeably wider and deeper soundstage, or voices ringing with even more clarity than I’m used to. However, that initial trepidation didn’t last long. What I heard in subsequent listening sessions made it clear that the Poiema had altered the sound of my system, just not in the ways I’d expected.

Norah Jones’s cover of Hank Williams’s "Cold Cold Heart," from her album Come Away With Me (CD, Blue Note 5818800), opens with a wide array of sounds: deep plucked strings, a light piano chord, and Jones’s rich, throaty voice. The Poiema articulated each of these with a dimensionality I had not previously heard from my system. The singer’s voice, in particular, took on a fullness that made the entire sound much more engaging. While I would hesitate to label it a new "richness" or "warmth," the "digital" character of my system’s sound had been greatly reduced, with a much more immediate and palpable delivery of detail.

Beyond Norah Jones, I have an unfortunate soft spot for Star Trek. Not only do I own all of the movies, I also have several of their soundtracks, including Jerry Goldsmith’s excellent score for Star Trek V: The Final Frontier (CD, Epic EK 45267). The dynamics on this disc are challenging to keep up with; the stock cable that came with the Benchmark DAC1 managed to make the brass section in "Without Help" sound almost cringingly harsh. Admittedly, much of this quality is likely in the original recording, but the Poeima deftly guided the trumpets in this track into my living room with more timbral heft than I was used to, and with a better sense of depth and space in relation to the other instruments in the orchestra. While this spatial improvement was slight, the improvement in instrument voicing was more substantial, and instantly perceptible.

The Poeima really hit its stride when it was introduced to 24-bit/192kHz recordings. In the Engegård Quartet’s superb recording of Haydn’s String Quartet in D Major, Op.76 No.5 (24/192 FLAC, 2L 53), the violin’s call and the cello’s response in the Finale -- Presto respectively come from the left and right sides of the soundstage. Whereas the stock cable portrayed the two instruments with a distinct leanness, and in particular voiced the violin with a flighty, almost metallic quality, the Poiema restored to both instruments the sonic weight I know they have in real life. Moreover, the soundstage expanded in every direction, particularly depth. No longer did all of the instruments seem to be piled on top of one another, as in a shallow diorama.

This was even more apparent in the Poco adagio -- Allegro of the Engegård’s recording of Beethoven’s String Quartet No.10 in E-flat Major, Op.74 (24/192 FLAC, 2L 71). With the Poiema installed, it became noticeably easier to pick out where on the stage each instrument was located. And, startlingly, the overall sound was even a touch sweet, a quality I had never before heard from my system. To be sure, the original recording is the culprit, but it was the first time I’d heard my system sound decidedly non-digital.

Ridge Street Audio Designs’ Poiema!!! R-v3 USB Digital Master is no insubstantial investment. After all, $550 will buy you a decent pair of bookshelf speakers, or a DAC, or an integrated amplifier, or dozens of hours of 24/192 recordings, any of which might be more prudent investments, given your particular setup. If, however, you find yourself in a position where you love the qualities of your DAC and just want more, then replacing your stock USB cable should be at the top of your to-do list.

The Poiema USB cable performed its duties admirably. Tasked to do its best at de-digitalizing my system, the Poiema respectfully allowed my DAC to deliver all of the resolution and clarity I had come to expect from it, all the while helping it sound more musical and more natural -- indeed, better than it ever had sounded before. This USB cable’s most endearing quality may just be its sonic signature: it didn’t have one. Whereas all the music played with my stock cable took on a dry, lean, sterile character, the Poiema seemed to hand off the ones and zeros of the digital signals it transmitted with uneditorialized honesty.

To keep perspective, the Poiema will not single-handedly transform the character or quality of your system’s sound. Such a result will surely be dictated more by the combination of the components resting on your equipment rack. But if you can afford it, the Poiema!!! R-v3 USB Digital Master will remove one of the obstacles between you and what any audiophile loves most: the music.