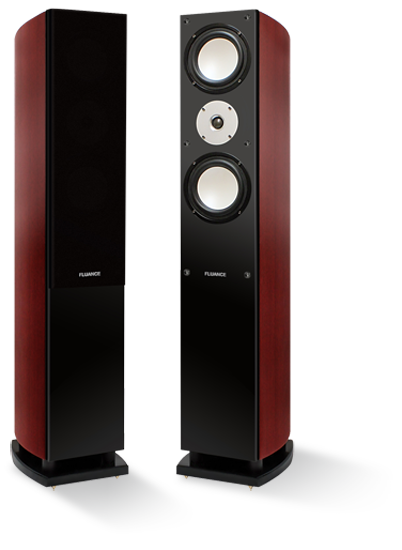 It all started with an innocent-sounding e-mail from Jeff Fritz, the SoundStage! Network’s editor in chief: “Check out the price on these: www.fluance.com/fluance-xl7f-floorstanding-loudspeakers.html. Interested?”

I went to the Fluance website, looked at the XL7F, and immediately e-mailed back: “You bet I’m interested!”

When it comes to audio bargains, I’m a mad dog. What I’d seen at the Fluance site was a floorstanding tower speaker with an 8” woofer, two 6.5” midrange drivers, and a 1” silk-dome tweeter, for a mind-blowing price of $469.99 USD per pair. “Are these people for real?”

Jeff assured me that they were. He even mentioned that the XL7F had a date at Canada’s National Research Council, in Ottawa, to be put through its paces.

But in the real world, outside of world-class anechoic chambers, how good could a pair of speakers costing less than $500/pair actually be?

The XL7F is tall but not very wide: 45.8”H x 8.5”W x 13.4”D. Its curved sides and flat back are finished in an exceptional cherry-hued vinyl laminate, while the front baffle is an exquisitely polished black gloss. Each speaker weighs 45 pounds. Like many speakers today, the XL7F is manufactured in China.

The rear panel has the most massive connectors I’ve seen on any biwirable speaker at any price. My banana plugs fit these a bit loosely, but that may be nit-picking. Obviously, other connections are available, but I’m not sure how any but the largest spade connectors would fit these posts. It also seems that if you also used Fluance’s rather hefty single-wiring jumpers, there would be some difficulty using bare wire. Bananas appear to be the best connector option. To solidify the bass response, each XL7F comes with hefty spikes to support its weight and couple it to the floor.

Fluance describes the XL7F’s woofer as an “isolated down-firing 8” polymer-treated, high-excursion [cone] with butyl rubber surround.” The woofer’s port is on the bottom third of the rear panel; the upper enclosure is a sealed box that’s isolated from the woofer enclosure. On the front panel are the two 6.5” midrange drivers, one each above and below the 1” silk-dome tweeter, in an apparent D’Appolito (midrange-tweeter-midrange) configuration. Fluance says that the midranges are “polymer-treated, high-excursion [cones] with butyl rubber surround[s],” and that the tweeter has a neodymium magnet and is cooled with ferrofluid. Usually, one finds such features only in speakers costing much more. 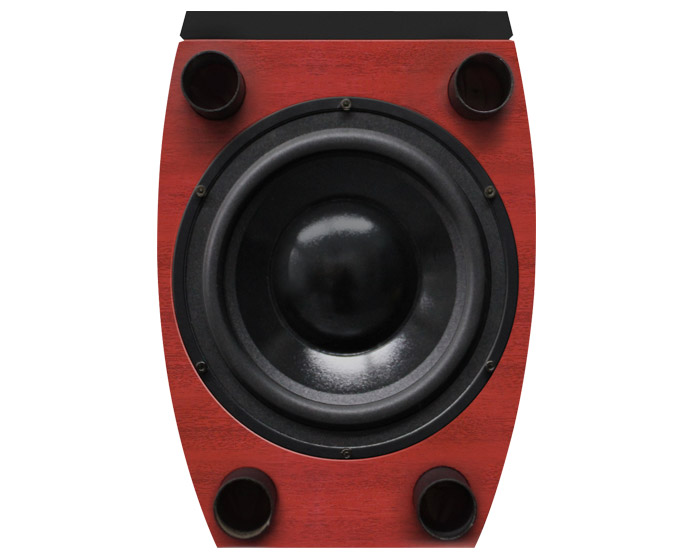 One small shortcoming of the front panel is how the grille is secured to it. Some grilles, such as those for my Acoustic Energy Radiance 3 towers, are affixed with magnets; when the grille is removed, a totally smooth surface is revealed. Other grilles have posts that fit into holes in the enclosure, which leaves the speaker a bit more unsightly when the grilles are removed (especially if the cabinets are light in hue), but still satisfactory. Fluance reverses this design: The XL7F’s baffle has posts that fit into holes in the grille; if you don’t use the grilles, the posts can snag clothing as you pass by. Not a terrible design flaw, but to me, a slight annoyance.

More technical details from the Fluance website: The XL7F’s crossover frequencies are 800 and 3500Hz, and the crossover itself is “phase-coherent.” The claimed sensitivity is 89dB, though no measuring distance or input level is cited. However, the XL7F’s real-world output for a given drive level is pretty close to that of my Acoustic Energy Radiance 3s, which are rated at 90dB/W/m.

One limitation of the XL7F’s low price is that Fluance provides little in the way of documentation. The one-sheet “manual” says little more than that the speakers need at least ten hours of break-in. The warranty sheet notes Fluance’s utterly remarkable lifetime limited warranty. The owner pays to ship the unit(s) back to Fluance (at this price, that’s to be expected); Fluance pays the return shipping of the repaired speakers.

You may need that warranty. A few days after I received the review samples, I noticed a problem with one speaker’s lower midrange driver. Its output was noticeably distorted, as if its voice-coil were rubbing. It took only a quick e-mail to Fluance to get another speaker shipped my way. Fluance’s quality control may not be flawless, but it’s nice to know there’s that lifetime warranty.

Google “Fluance” and you’ll find a number of misleading associations of the brand with speakers called “Nuance.” Apparently, the latter were largely sold in parking lots at egregious markups and were pretty much junk. Fluance spokesman Dwaine Chamberlain told me that Fluance has “no relation to Nuance. I actually saw a forum post that tried to relate our brand with something called Nuance also saying that we sell speakers out of a van. Just not true.”

To give the XL7Fs their recommended ten hours of break-in, I hooked them up to my small living-room system (NAD C 525BEE CD player, Sangean HDT-1X AM/FM/HD tuner, NAD 712 receiver) and let them run at low levels for a few days. Even out of the box, they put out some nice sounds. I was taken aback that speakers costing so little could sound so good. Then I moved them down to the main system to let them strut their stuff.

Strut they did, with music as varied as Ray Conniff (think 1960s elevator music, but beautifully recorded); Frank Sinatra; John Pizzarelli; Lambert, Hendricks & Ross; Paul Simon; Santana; and Dire Straits. The Fluances really liked newer recordings, especially those made on the West Coast (probably mastered with JBL studio monitors). After fooling around with their placement a bit, I ended up with the XL7Fs describing a 6’ equilateral triangle with my listening seat. After some critical listening, I removed the grilles, which I felt were not acoustically benign.

One aspect of the XL7F’s sound that surprised me was its woofer’s smooth, even output. Often, even very expensive speakers have one bass frequency that overpowers all others, usually due to room modes. That wasn’t the case with the XL7F. It had one of the cleanest, most balanced bass sounds that I’ve ever heard in my room, regardless of the price of the speaker. No, it didn’t dig quite as deep as some speakers that include powered subwoofers, but with 98% of the recordings I played there was no lack of bass. If a record had bass, the XL7F let it through.

I almost always play Fourplay’s “Bali Run,” from Fourplay -- in this case, a 24-bit/96kHz download from HDtracks -- because of the group’s use of a five-string electric bass, whose lowest note is about 32Hz. The lowest notes can create some distress for many speakers. The Fluances were not stressed, turning out effortless, meaty, low bass that exhibited none of the Johnny One-Note behavior of more than a few of their competitors.

The XL7F’s midrange had a slightly dark tonality, but this sounded more polite than reticent. An example was Manhattan Transfer’s recording of Weather Report’s “Birdland,” from The Definitive Collection (CD, Atlantic/Rhino R2 74111). The Fluances gave Janis Siegel’s glorious mezzo a depth that was totally in character, but not something I’ve heard from many other speakers. But the voices of soprano Cheryl Bentyne, tenor Alan Paul, and baritone Tim Hauser weren’t slighted in the least.

OK, jazz was definitely within the strengths of the XL7F. What about other genres?

“Money for Nothing,” from Dire Straits’ Brothers in Arms (CD, Warner Bros. 47773-2), has always been a fave, especially the long intro’s nearly psychedelic drums and guitar riffs. The Fluances gave the drums an excellent heft that entirely suited the music. The width and depth of the image of the drums were fitting for the song, even if drummer Terry Williams would have had to have arms each about 6’ long. Mark Knopfler’s voice was quite natural, with just enough edge to give the performance a real sound. 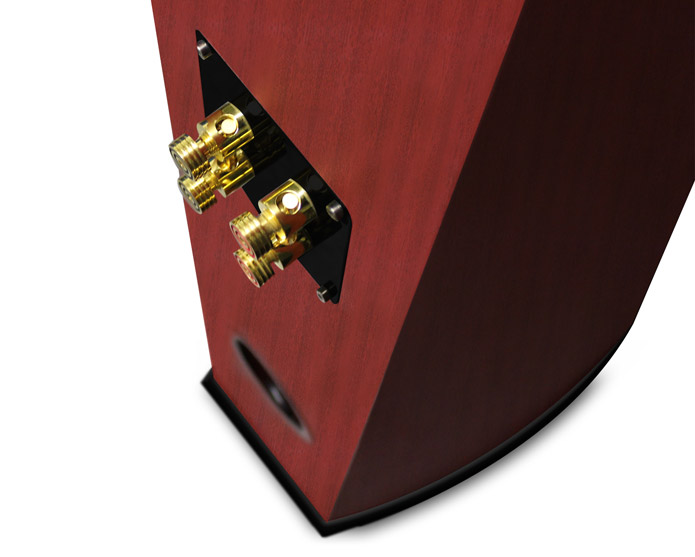 Then I chose something from the 2L-TWBAS 2012 Sampler (24/176.4 FLAC, 2L/SoundStageRecordings.com) -- the Allegro Affetuoso (La Notte) of Ole Bull’s Concerto Fantastico, with violinist Annar Follesø and Ole Kristian Ruud leading the Norwegian Radio Orchestra. Bull was Norway’s leading violinist in the mid-19th century, and spent many years in the US. This movement is a fascinating piece of music. Early on, the trumpet came in clearly and distinctly. The solo violin part was exciting, with exquisite tone even on the very high notes. Once again, I noted that when there was bass in a recording, the Fluance reproduced it well; but when bass was absent, the XL7F didn’t create a false sense of bottom end where none was actually present. However, the cellos were a little muddy; but while noticeable, this wasn’t a deal breaker.

Yet with David Zinman and the Baltimore Symphony’s recording of Bernstein’s Candide Overture (CD, Decca 452 916), the cellos were clean and clear. The sound was well balanced, and the orchestra was arrayed before me as I remember seeing them in the many concerts I attended at Meyerhoff Hall.

The nearly identical sensitivities of the Acoustic Energy Radiance 3 and the Fluance XL7F meant I could compare them with little fuss or bother. With their more polite mids and highs, the Fluances were less inclined to call attention to themselves -- a characteristic not always to their advantage. With some high-powered rock, for instance, the XL7Fs weren’t always able to groove as they should have. But during one evening when I listened to many soul hits of the 1970s and ’80s, they put out enough rhythm to stir my bod -- high praise from me. The Fluances’ bass performance was superior to that of my combo of Radiance 3s and Advent ASW 1200 subwoofer in that, across the audioband, the XL7Fs’ bass output was more even. In fact, the Fluances’ bass lines were as good as those of any full-range speaker I’ve had in my system, regardless of price.

The Fluance XL7F wasn’t perfect. I have some very small quibbles with its build quality, but only about the cosmetics -- nothing to do with sound. They didn’t reveal quite all of the detail some recordings offer. And they didn’t reproduce the absolutely deepest bass. There are speakers that have a more spritely midrange and airier highs, but most of them cost many times more. For instance, my Acoustic Energy Radiance 3s have a crisper, more detailed high end than the Fluances -- but at $3000/pair, they cost more than six times as much.

The Fluance XL7F is an incredible value that’s worth every cent of $469.99/pair -- and far more. In fact, Fluance could easily raise the speaker’s price by quite a bit and still be offering the deal of the year. (But if you don’t tell them, I won’t.)

If you have the space and the spousal approval for tall speakers that need to be at least 6’ from each other and 6’ from you, but you don’t want to take out a second mortgage on your home, run, do not walk, to your computer and order a pair of Fluance XL7Fs. They very well may be the audio bargain of the 21st century.