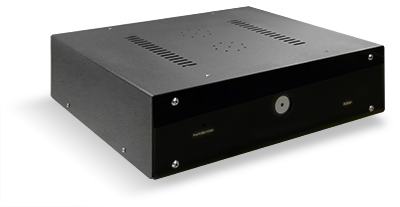 When asked to make recommendations for assembling a stereo system, I never mention power conditioning. There are practical reasons for the omission, the first being that, unlike a source component, amplification, and loudspeakers, one doesn’t need a power conditioner to operate a system. The second reason is that most people have to work within a limited budget; I’m more inclined to suggest that they sink their money into better electronics or speakers before trying to clean up the power supply.

Having said that, I am not suggesting that power conditioning won’t improve the sound of a system. I’ve used an ExactPower EP15a to great effect for several years, and have enjoyed what it’s added to my listening -- though the more accurate phrase is subtracted from. I suspect that since I live in an apartment, I’m more susceptible to fluctuations in power because I share it with a large number of people. Even changes in power usage within my own apartment are noticeable: When the refrigerator kicks on in the kitchen, the living-room light momentarily dims. With the EP15a, my system is better isolated from these oscillations.

The subject of this review is one of the newest products to emerge from Blue Circle Audio, based in Innerkip, Ontario: the BC60X1 hybrid balanced power conditioner ($4495 USD).

In three previous reviews I’ve written of their products, I’ve described the aesthetic of Blue Circle Audio as being either pragmatic or ugly; I’ve never said anything terribly positive. The BC60X1 has changed this. While it doesn’t qualify as audio jewelry, it looks attractive in a clean, understated way. This impression is enhanced by its solid build, which includes nice metal casework and a black Plexiglas faceplate, and the thing’s sheer heft -- it weighs about 40 pounds. However, it was the blue glow of the company’s trademark logo at the center of the faceplate that caught the attention of a friend of mine, and prompted him to compliment its appearance. The pragmatic Gilbert Yeung, the man behind Blue Circle Audio, may always put function before form, but in the BC60X1 he’s done a nice job of combining them.

The BC60X1 measures 17"W x 4.5"H x 15"D, dimensions that allow Yeung to fit 12 outlets on the back. You can buy a BC60X1 with as few as four outlets (two filtered, two filtered and with balanced power), or as many as you want (Yeung tells me there’s no upper limit). The outlets are all well spaced and hospital grade -- i.e., they tightly grab the tines of your electronics’ plugs. The BC60X1 sits high enough off the equipment rack to accommodate the bulky wall-wart power supply of components such as my Thorens turntable. This is a nice change from the ExactPower, which I have to elevate on foam to create enough space to connect larger plugs to its bottom row of outlets.

Unlike in other power-conditioning products I’ve encountered, not all of the BC60X1’s 12 outlets are identical. Only a passive filter network feeds six of them, while the other six are not only filtered but offer a combined total of 800W of balanced power. When I asked Yeung to give me his rationale for balanced power on only some of the outlets, he explained that his goal was to give music played through those outlets a bit more smoothness through the midrange. Unfortunately, since a transformer is needed for them, there’s a limit on how much current can be sent to those components. Owing to this, the balanced-power outlets are recommended for line-level components, the non-balanced-power outlets for amplifiers whose current delivery won’t be constrained by the BC60X1’s transformer. Yeung conceded that lower-wattage amplifiers can be used with the balanced outlets, but cautioned that the listener should spend time experimenting with both to ensure that the BC60X1’s transformer doesn’t restrict the amp. According to him, some makers of balanced power conditioners assert that their products don’t limit current, but he says he’s never seen evidence to support this claim.

It might seem logical to include more outlets with balanced power, since most people don’t run multiple amplifiers and therefore don’t need multiple outlets. But here again, Yeung suggested that buyers of the BC60X1 should still experiment by plugging their line-level components into both sets of outlets. Apparently, some electronics perform better with balanced power. The key thing to remember when using the balanced outlets is that because they constrain current, the total power draw from them can’t exceed 800W. Since there are no hard rules on which outlets will perform best with which components, it’s understandable that six of each are provided (depending, of course, on the number of outlets specified at the time of purchase).

One thing that surprised me about the BC60X1 is that its parallel filtering network is apparently so large that it will also benefit whatever is plugged into the other socket on the wall outlet. This effect decreases with increasing distance from the filter, and given that the BC60X1 comes with a 6’ power cord, this means that something plugged into the second outlet will not experience the same degree of filtering as those components plugged directly into the BC60X1 itself. This parallel filtering effect is the reason many of Blue Circle’s other plug-in filters have short power cords.

A feature that sets the BC60X1 apart from many other conditioners on the market, including many of Blue Circle’s own models, is the inclusion of what the company calls its X1e module. The role of the X1e is to provide filtering at lower frequencies, thereby allowing it to filter a wider spectrum of noise. The BC30X1 ($2195) is the only other Blue Circle conditioner to include the X1e. The smaller, six-outlet FX2 has its own module, the X0e, which presumably offers some of the lower-frequency filtering benefits of the X1e at a more attainable price ($495).

For interested buyers, the BC60X1 also comes with the option of adding an internal, user-replaceable surge protector, to keep your gear from getting fried during thunderstorms.

Blue Circle’s BC60X1 served as the backbone of a system that included Amphion’s Argon3L speakers, connected using AudioQuest Type 4 cables to a Bryston B135 SST2 integrated amplifier. Sources included an NAD C 565BEE CD player that served as a transport for a Bryston BDA-2 DAC, to which it was linked through an i2Digital X-60 digital coaxial interconnect. A MacBook computer running Audirvana software provided the DAC with digital content via an AudioQuest Forest USB cable. The Bryston DAC was linked to the integrated amp with Kimber Kable Tonik interconnects.

Since a unique feature of the BC60X1 is that it gives the user the choice of plugging electronics into balanced or nonbalanced outlets (recall that all outlets are filtered), I spent some time experimenting with both to determine if I could hear a difference. Listening to “Way Down,” from Tori Amos’s Boys for Pele (CD, eastwest A2 82862), I preferred the sound when the CD player and DAC were plugged into the balanced-power outlets -- it made her voice sound a touch richer than through the nonbalanced outlets. The difference was subtle, and not the kind of thing I’d notice with poor recordings, but the greater fullness it revealed in Amos’s voice was pleasing, and made her tone more clear.

The most effective way of hearing the Blue Circle’s effect on my system’s sound was to then unplug all electronics from the BC60X1, feed them power directly from the wall, and play the same track. Swapping one pair of speakers for another almost always reveals noticeable, even significant differences in a system’s sound, but I find I can better appreciate the contribution of a power conditioner by removing it from the system. Listening to “Way Down” without the BC60X1 resulted in a background that wasn’t as quiet. This was apparent with the choir, which didn’t extend as far back -- as if the stage had lost some depth. Power conditioners are typically credited with helping to lower a system’s noise floor, and in this instance I suspect that, without the BC60X1, I was missing some resolution, which I perceived as a lack of stage depth. With the BC60X1 back in circuit, music had “blacker” backdrops, against which things popped out a bit more. They didn’t sound more forward or upfront, but more present, with better isolation of images across the stage. This was most evident with tracks such as “Way Down,” where the combination of a simple musical arrangement and good recording quality already made it easier to hear what was happening in front of me. 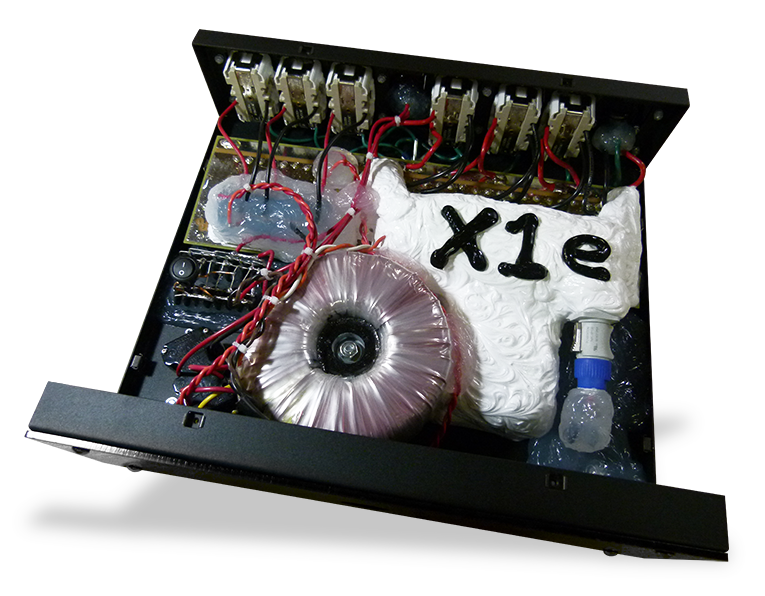 I spent a little more time playing my sources from the Blue Circle’s balanced and nonbalanced outlets, and again was able to hear differences with well-recorded music. The sound of “Society,” from Eddie Vedder’s soundtrack for Into the Wild (CD, J Records 88697-15944-2), was more expansive with the BC60X1 than without it, and Vedder’s voice was spread out to the sides and a bit farther back through the balanced-power outlet. Still, the differences in his voice through the balanced outlets weren’t profound -- I was pretty happy with whatever outlet I was using at the time. The point here is that the BC60X1 let me play around with my setup to make minor tweaks as desired.

I also tried connecting my Bryston integrated amplifier to both sets of outlets. The amplifier section of the B135 can produce 135Wpc, and I was curious to hear whether plugging it into the transformer-coupled outlet might deprive it of current. It turned out that this was not a problem. The thunderous dynamics of War Dance, from Eiji Oue and the Minnesota Orchestra’s recording of Respighi’s Belkis, Queen of Sheba: Suite (CD, Reference RR-95 CD), remained solidly intact, regardless of which outlet I used. I can’t comment on how a beefier, more current-hungry amplifier might have sounded through one of the BC60X1’s balanced-power outlets, but the Bryston B135 experienced no problems.

Once again, I disconnected all components from the BC60X1 and plugged them directly into the wall. When I played the Respighi again, the acoustic of Minneapolis’s Orchestra Hall wasn’t as clear as through the power conditioner. The BC60X1 provided a blacker background, against which details such as spatial cues and a venue’s ambiance were better preserved. It didn’t increase the resolution of my system, but it did lower the noise floor -- if your system is already quite revealing, you should hear even more of what it’s capable of reproducing.

With all of my electronics plugged back into the BC60X1, I played the title track of Willie Nelson’s Stardust (CD, Columbia/Legacy CK 65946). The strings of his acoustic guitar sounded pristinely clean as the system delivered every nuance of his playing and singing with commendable realism. Stardust is one of the better-sounding recordings in my collection; played with the BC60X1 powering the system, it sounded as good as I’ve ever heard it, conveying levels of detail and presence that demanded my attention.

As I spent more time with Blue Circle Audio’s BC60X1, I thought more about its intended market and, more generally, about the value of conditioning the power for an audio system. If there’s something you don’t like about the sound of your current stereo, it’s unlikely that the BC60X1 will fix the problem -- there are other changes you can make that will have a bigger impact on its sonic signature. The BC60X1 is for the person who already owns a high-quality system and is happy with its sound, but wants to know if it can be improved even further. At $4495, the BC60X1 isn’t cheap, but if you’ve invested quite a bit in your stereo and want to take its sound to the next level, the Blue Circle might be able to do the job. It’s like polishing a precious stone -- it may very well bring out even more from something you already cherish.