Tubes or transistors? If pressed, I’m sure many audiophiles will probably tell you they prefer one to the other. Not me: I’ve owned and enjoyed more than few amps of each type -- everything from flea-watt SETs to huge, megawatt space heaters -- and everything in between. As long as the amp makes good music, I’m all ears. 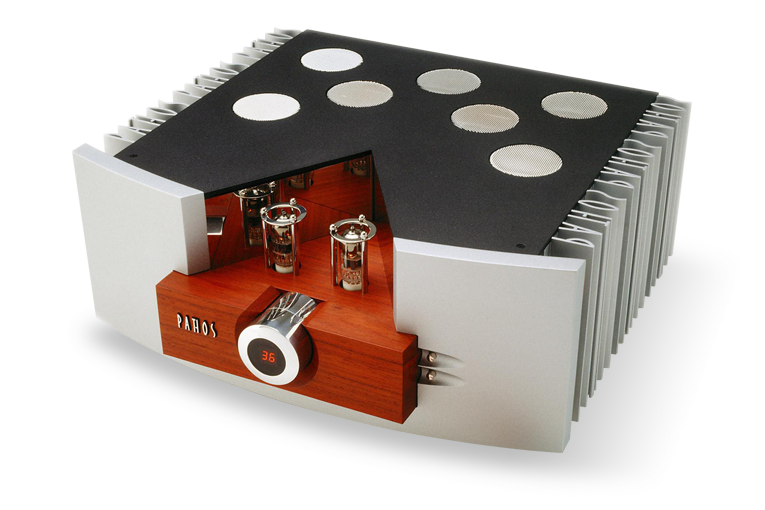 It would be natural, then, to assume that a hybrid amplifier could strike my fancy as much as any other type. But while most hybrids have sounded OK to me, I never came across one that could deliver the musical goods: The hybrid amps I tried tended to combine the typical shortcomings of tubes and transistors, not their advantages. Missing would be many of the promised benefits, including beguiling liquidity and effortless slam; in their place would be flabby bass and cold, analytical sound, usually along with a host of other nonmusical traits. I never found a hybrid I could enjoy in the long term.

Apparently, hybrid amps aren’t a long-term prospect in the marketplace, either. Many have come and gone, but few have endured as well as their all-tubed, all-solid-state brethren. One can immediately think of several examples of each of the latter that have been in continuous production a decade or more -- models from Audio Note, Cary, YBA, and McIntosh come to mind. Measure hybrids against that yardstick and they come up short.

Except for the Pathos Lògos.

Having been in production for well over a decade, the Pathos Lògos -- now in a MKII version ($6295 USD) -- has stood the test of time. So has its appearance: The Lògos MKII’s distinctly modern Italian aesthetic is as captivating today as it was at the beginning of the century. The chromed knob of its digital volume control, nestled into the center of that gorgeous, triangular chunk of solid padauk wood, makes the Lògos MKII look less bulky than it actually is. Mirrors sitting atop the wooden platform behind the vacuum tubes heighten their glow while softening the overall look. Add the curved faceplate, the matching padauk remote control, and those beautifully machined heatsinks, carved to spell out “Pathos,” and you have one of the most visually stunning, lustworthy amplifiers available. 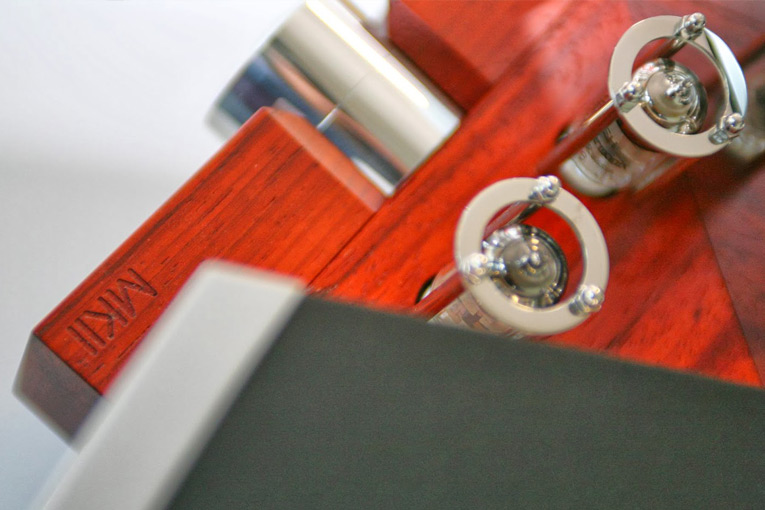 But this isn’t a case of style over substance. The Lògos is also built to the highest audiophile standards. It features a fully balanced preamp stage utilizing a pair of 6922 double-triode tubes (or E88CCs and variants, if you prefer) for voltage gain. Instead of a potentiometer, the Lògos MKII’s volume control incorporates a laser-trimmed, purely resistive network regulated by a premium Burr-Brown PGA2310 chip.

The volume knob doesn’t require much in the way of mechanical movement: turn it to the right about 30 degrees to raise the volume, or to the left by the same amount to turn it down. Use the upper inset round pushbutton, just to the right of the padauk platform, to cycle through the inputs; use the lower one to power the Lògos off and on from standby. The master power switch is on the rear panel. 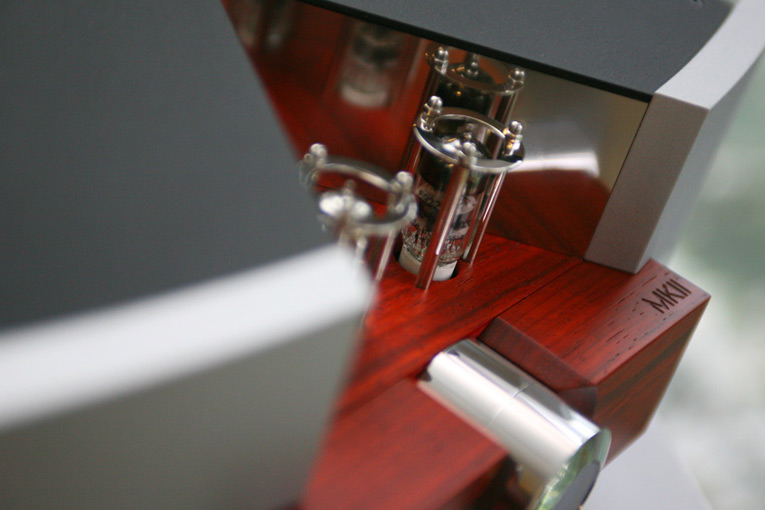 Though it’s still quite simple in absolute terms, the Lògos MKII’s remote actually has more controls than the amplifier: a whopping six little round buttons. With these you can adjust volume up and down, select inputs, power on from standby, mute, and dim the volume display. 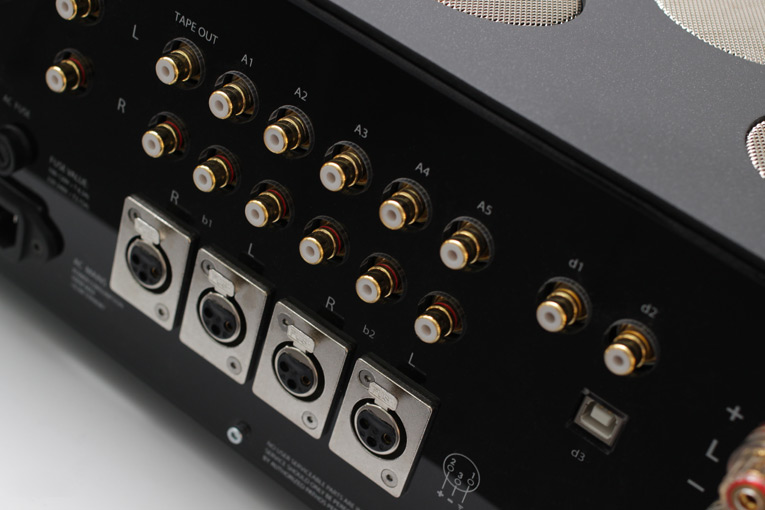 The preamp couples to a traditional class-A/B transistor power amp using MOSFETs for current gain. The Pathos designers chose MOSFET devices for their similarities to vacuum tubes, and with the goal of unifying operational behavior between the preamp and power-amp sections. The Lògos’s power output is specified as 110Wpc into 8 ohms or 220Wpc into 4 ohms. As befits an integrated amp with hefty power ratings, it tips the scales at 62 pounds.

Once I’d muscled the Pathos onto the equipment rack, made all connections, and felt satisfied with its run-in, I cued up tenor saxophonist Joe Henderson’s Grammy-winning Lush Life: The Music of Billy Strayhorn (SACD/CD, Verve B000138136). The Lògos MKII immediately impressed with its singular voice, smooth midrange, and slightly laid-back presentation. In fact, the Lògos MKII sounded noticeably more refined in these areas than my sonic recollection of any hybrid amp of yore. This was most decidedly not an amplifier that wedded the worst of tubes and transistors: The Lògos MKII made music believably gel in a continuous and wholly organic fashion, with fine note-to-note flow, excellent pitch accuracy, and convincing rhythmic stability.

This continuity also paid dividends in terms of detail rendition and instrumental separation. In the layered tracks “Johnny Come Lately” and “A Flower Is a Lovesome Thing,” from Lush Life, the Lògos deftly separated musical lines while keeping them within the larger aural picture. Small details, like hearing the keys of Henderson’s sax click open and close, were cleanly and clearly rendered, as was the sound of Wynton Marsalis’s lips pressurizing his trumpet’s mouthpiece. Hearing these musical and sonic details presented as part of a unified sound made Henderson and company sound like a highly tuned ensemble whose musicians were always in sync with each other. 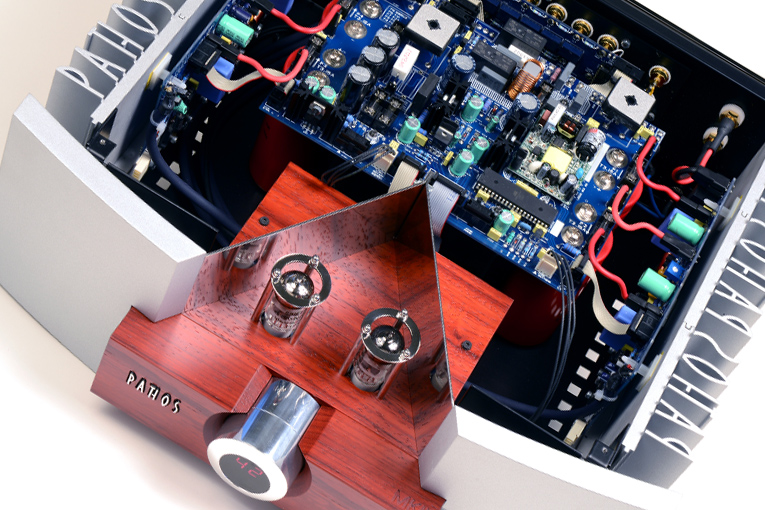 As might be expected from an integrated with a tubed preamp section, the Lògos MKII also had fine tonal development, especially through the midrange. In “The Man I Love,” from Herbie Hancock’s Gershwin’s World (SACD/CD, Verve B000137936), Joni Mitchell’s rich, husky voice came through with plenty of texture and a smidge of golden tube glow. So did Hancock’s piano, while also sounding harmonically complete and devoid of any glare, hardness, or glassiness.

Good as the Pathos was with voice and piano, it was even better with woodwinds. In “Where Seagulls Fly,” from Noah Preminger’s Dry Bridge Road (CD, Nowt 002), the leader’s sax sounded enticingly fulsome and round without being syrupy, thick, or bloated. The solo-bassoon intro of Stravinsky’s The Rite of Spring, in the recording by Esa-Pekka Salonen and the L.A. Philharmonic (SACD/CD, Deutsche Grammophon 002894776198), sounded faithfully smooth and fluid, with notable clarity and openness.

The Stravinsky also highlighted the Pathos’s soundstaging and imaging capabilities. The amp did well at conveying the grand scale of Walt Disney Concert Hall, and the sense of the orchestra “blooming” into that space. The musicians populated a wide, deep stage, while images of soloists within the orchestra were precisely and cleanly rendered. But the tune that best highlighted the Pathos’s imaging prowess turned out to be “Hat and Beard,” from a 45rpm pressing of Eric Dolphy’s Out to Lunch (LP, Blue Note/Music Matters MMBST-84163). Bobby Hutcherson’s vibraphone and Tony Williams’s drums often startled me with their palpable in-room presence and image solidity. During one late-night, lights-off listening session, visualizing these two gifted musicians playing in front of me through the Lògos MKII was easy work.

Feeling now that I had a handle on the Pathos’s sonic signature, I wanted to hear how it stacked up against my reference integrated, the Marantz PM-KI Pearl. Designed and voiced by famed engineer Ken Ishiwata to commemorate his 30-year partnership with Marantz, this limited edition, pure-solid-state musical overachiever retailed for only $3499 when available, but still compares favorably with far costlier integrateds. I felt that the Marantz, with its claimed power ratings of 90Wpc into 8 ohms or 140Wpc into 4 ohms, matched the Pathos well enough for a meaningful comparison.

On first listen, the amps sounded only mildly different, the Pathos holding the advantage in the areas highlighted heretofore: a smoother midrange, warmer and denser tonality, more three-dimensional soundstages. With Joe Henderson’s Lush Life, for example, the Lògos MKII carved out images with a bit greater precision than the Marantz, which is no slouch in this regard.

But when I played Noah Preminger’s Dry Bridge Road, I could hear larger differences. One of these was how each amp reproduced bass. The Pathos mildly emphasized the midbass up through the lower mids, making John Hebert’s double bass sound a shade plumper and richer than I’m used to hearing it. The Marantz countered by digging deeper into the lowest notes, which resonated with greater visceral impact.

This difference in bass presentation was especially noticeable with an original pressing of Radiohead’s Kid A (LP, EMI 529590). Reproducing “Everything in Its Right Place” and “Idioteque,” the Lògos developed a touch more texture and tone, lending more “purr” to synth-bass chords. But the Marantz made kick drums and other rhythmic bass hit lower, tighter, and harder, thereby pressurizing the room to a greater degree. Mind you, the difference in these amps’ low-end responses wasn’t night and day, but it was noticeable and consistent from album to album.

Those two up-tempo Radiohead tracks also highlighted the areas in which the Pathos and Marantz most differed: momentum, timing, and dynamics. With high-energy, high-octane music, the PM-KI Pearl propelled the music forward in what resulted in greater excitement and intensity, while communicating more of the attack and leading-edge components. The Pathos sounded less incisive in comparison, with less of a sense of urgency.

Partnering the Lògos MKII’s relative lack of incisiveness was its slightly blunted expression of dynamics. In Mussorgsky’s Night on the Bare Mountain, also on the Stravinsky SACD, the Pathos did well at letting most of the macrodynamic range come through, but couldn’t quite match the forceful way the Marantz accelerated the rolling, thunderous drum thwacks on this track.

That didn’t mean that the Pathos couldn’t crank it up to 11, however. Far from it -- the Lògos MKII played noticeably louder than the Pearl with no hint of stress or strain, which will probably be a huge asset if you’re planning on pushing some current-hungry or low-impedance speakers. The KEF R700s and the Verus Grand Towers, both of which I used for this evaluation, are fairly standard, average-sensitivity loads, which meant that the Pathos had an easy time rattling the walls when called for.

In the end, both integrateds proved to be excellent performers, and highly comparable in terms of sonic and musical capabilities. Those looking for something that exemplifies the best virtues of a transistor-only design will choose the Marantz; others, looking for a bit more smoothness and palpable presence, will prefer the Pathos. Me? I’ll stick with the Marantz for now -- I greatly enjoy its incisive timing, propulsive momentum, and highly dynamic contrasts. But if I didn’t already have the Marantz, I could happily live with the Pathos Lògos MKII -- and did so for more than a few months.

The Pathos Lògos MKII pleasantly surprised me by doing something I didn’t think was possible: It combined the virtues of vacuum tubes and solid state while omitting most of the drawbacks of either, in one heck of a visually stunning package. And it has power to spare for just about any speaker it’s likely to be partnered with. 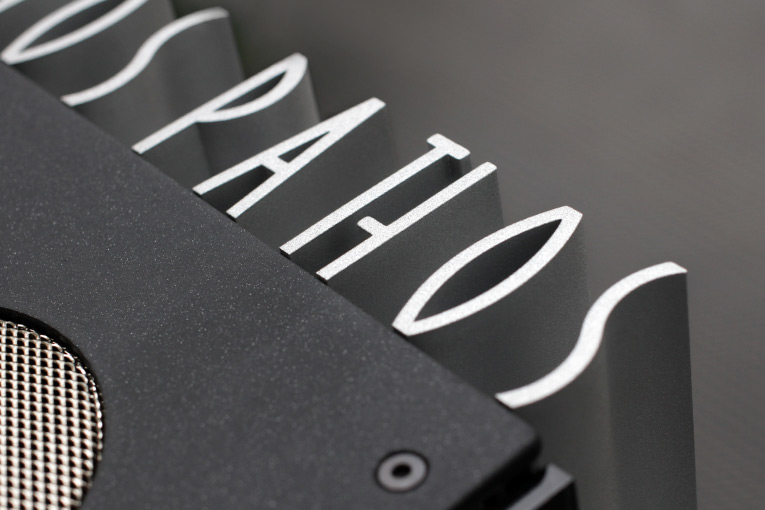 Of course, $6295 for a single-box amp isn’t chump change -- you pay a premium for the Lògos MKII’s gorgeous looks and build quality. After all, it takes only one overachiever, like the Marantz PM-KI Pearl, to point out that there are probably other integrateds available that offer more performance than the Lògos MKII for the same amount of money.

Nevertheless, I imagine that the Pathos Lògos MKII’s blend of refined sound and fantastically good looks is just the sort of integrated amplifier many audiophiles are looking for. It’s a thoroughly accomplished performer that makes music in a natural and wholly believable way. It was compelling enough that even I enjoyed it over the long haul. If you’re looking for a hybrid amp to delight the eyes as much as the ears, I can think of none better than the Pathos Lògos MKII.