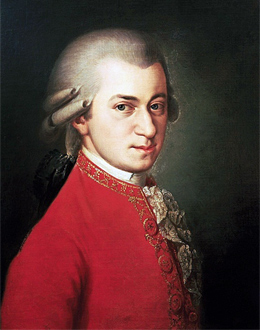 While everything about Mozart provokes some level of amazement even now, some 220 years after his premature death, the summer of 1788 must be singled out for the absolute masterworks composed in different instrumental formats. The completion of his three final (and greatest) symphonies -- No.39 in E-flat, No.40 in G minor, No.41 (the "Jupiter") in C major -- within six weeks led to a myth that persists in some parts even now: that Mozart composed these marvelous works in a sudden rush of sheer inspiration, without a commission and with no real expectation of hearing them performed, and simply put them away without ever hearing them during the years left to him.

That myth suited the romantic sensibilities of several generations, but simply has no basis in fact. No musician as experienced and practical as Mozart would have done anything of the sort. He apparently wrote those symphonies for a conjectural visit to London in hopes of securing some kind of position in the city in which he had been so well received when he was a young boy. That trip never took place, but Mozart took some or all of those symphonies on a tour of German cities in the spring of 1789, and in April 1791, just eight months before his death, his colleague Antonio Salieri (subject of another totally unfounded but even more persistent Mozartean myth) conducted two of them in concerts in Vienna -- for which occasion Mozart added clarinets to his original scoring of No.40 in G minor.

Six weeks after drawing the last double bar in the score of the "Jupiter" Symphony, Mozart completed a similarly exalted work for a much smaller ensemble which more than a few commentators have regarded as the peak of his chamber music production. While all ten of the string quartets he composed in Vienna are among the greatest works of all time in that format, he achieved a still greater degree of inspiration, grace and depth in a smaller quantity of chamber music for somewhat different groups of strings. Between 1787 and 1791 he added five remarkable string quintets (with a second viola joining the quartets’ two violins, one viola and cello), and on September 27, 1788, he completed the Divertimento in E-flat for string trio (one violin, viola and cello), K.563, which occupies a unique position among his works. 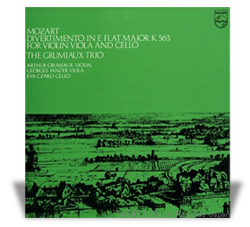 He dedicated the Divertimento to his Masonic Lodge brother, Johann Michael Puchberg, from whom he was desperately borrowing money at the time. This quintessentially intimate music was not introduced in the "quartet parties" in which Mozart took part in Vienna with his senior colleagues Joseph Haydn and Karl Ditters von Dittersdorf as violinists, himself as violist, and the Bohemian composer Johann Baptist Vanhal as cellist, but had its first performances during the German tour in April 1789, not in drawing rooms but in the public halls in which he introduced his contemporaneous symphonies.

This was the only work for string trio which Mozart brought to completion, and it is, as his renowned 20th-century biographer Alfred Einstein put it, "one of his noblest works" in any form. The title Divertimento was apparently affixed by Mozart himself, as the work -- his most extended in the realm of chamber music -- observes the classic divertimento format he had followed in his festive "entertainment" works for larger groups of strings and winds in his Salzburg years: fast opening and closing movements framing a slow movement, two minuets (usually contrasting in character), and one movement in the form of a theme-and-variations. As Einstein remarked, however, "it is a true chamber-music work, and grew to such large proportions only because it was intended to offer . . . something special in the way of art, invention, and good spirits. . . . Each instrument is primus inter pares, every note is significant, every note is a contribution to spiritual and sensuous fulfillment in sound."

In this particular Divertimento, it is the variation movement -- in B-flat, the fourth in the sequence of six -- that many have regarded as the crown of the work. It is without question among the most exalted of all Mozart’s instrumental utterances, regardless of format or instrumentation. It is a stunning example of conciseness, pointedly bearing out Einstein’s observation on the value of "every note," and without a single merely ornamental one.

There are only four variations, but because each is repeated with certain further variants the overall effect is a total of eight very brief but remarkably rich sections. In the final variation the theme is given out by the viola (Mozart’s own favored stringed instrument as a performer) and a dramatic underpinning is provided for its firm, resolute voice by the fiercely energetic contrapuntal activity of the violin and cello. At the end of this movement there is a fleeting, virtually elegiac recollection of the theme in its original form. This entire spiritual drama is executed in seven-and-a-half minutes, leaving the remaining minuet and finale to provide not so much a contrast as simply the sort of civilized yet hearty leave-taking instinctive to Mozart in achieving such peerless musical and emotional balance.

Both of the outer movements are characterized by warm-hearted geniality, the slow movement by uncontrived intimacy and grace, while the minuets that frame the variation movement are by turn richly celebratory and more intimately ingratiating. Overall, this grand work provided a clear model for the earliest of the young Beethoven’s string trios, in the same key of E-flat, though he did not label his six-movement Op.3 a divertimento. In terms of substance, however, Mozart here prefigures the still later chamber-music masterworks of Franz Schubert, whose life was to be cut short at an age even younger than Mozart’s own.

Over the years there have been fewer recordings of the grand Divertimento than might have been expected, but several have been outstanding in one respect or another. Among these were an insightful version by the Pasquier Trio on pre-war Columbia 78s; an early LP recording by the same group, issued in the US by the Haydn Society and recently revived on CD (Music & Arts CD-1233); an affecting contemporaneous one on an early Westminster LP (WL 5191) with the London-based Jean Pougnet (violin), Frederick Riddle (viola) and Anthony Pini (cello), and a suave, handsomely recorded one by the Trio Italiano d’Archi on a Deutsche Grammophon LP late enough to be stereophonic (139150). Recordings by super-virtuosi, such as the famous one made in 1941 by Jascha Heifetz, William Primrose, and Emanuel Feuermann (RCA Victor 09026-61740), tend, for all their undisputed brilliance, to be rather less about the music than about the performers, but a glorious exception, led by the great Belgian violinist Arthur Grumiaux more than 50 years ago, is probably the most persuasive recording ever made of this great work. 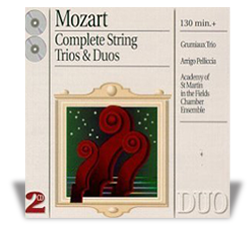 Grumiaux (1921-1986) may not have been regarded as a superstar by today’s rather curious standards, but he was an enormously respected musician who distinguished himself in everything he undertook, and, fortunately, many of his recordings remain available on CD. His sets of all the Beethoven sonatas for piano and violin, with Clara Haskil (Decca 475 8460), and those of Mozart, with Walter Klien (Philips 412 141-2), claim first place on many lists, and he is remembered with similar respect and admiration as a soloist in concertos ranging from Bach and Beethoven to Stravinsky and Berg. He was serious enough about chamber music to form a memorable trio with two colleagues who had distinguished themselves in that category: the violist Georges Janzer and the cellist Eva Czako (who was Janzer’s wife). The Grumiaux Trio made what many regard as definitive recordings of the Beethoven string trios (Philips set 456 317-2) and, with an added violin and viola, the six Mozart string quintets (Philips set 416 486-2), but surpassed itself in its truly incomparable account of the Divertimento (in Philips set 454 023-2).

Some wayward performers, perhaps awed by this great work, make the deadly mistake of thinking they must labor heavily and conspicuously to drive home its profundity; some others aim for an austerity that suits the work no better. Mozart was constitutionally incapable of such self-conscious gestures, which can only deface the work and drain the life out of it. Life, indeed, is what this music is all about: it defines itself in terms of spontaneity and natural momentum. Grumiaux and his associates simply allowed the music to proceed on its own terms, in a performance which is itself uncontrived exaltation in demonstrating what Einstein noted as the primus inter pares written into the music. As one example of their lightly borne insightfulness: just before the concluding variation in the fourth movement, they take a barely perceptible pause in their otherwise seamless reading, by way of indicating -- subtly enough that the momentum is undisturbed -- that chorale-like section’s function as an epilogue to the little spiritual drama that has led up to it.

The 1967 Philips recording, as transferred to CD, remains a model of good balance and realistic representation of the respective instruments. The two-disc set is generously filled out with other treasurable Mozart recordings from the same pre-digital period: not only Mozart’s other music for string trio -- his transcriptions (or in any event transcriptions attributed to him) of Preludes and Fugues from Bach’s Well Tempered Claivier, again performed by the Grumiaux Trio, and the unfinished Trio in B-flat, K.266, played by members of the Academy of St Martin-in-the-Fields Chamber Ensemble -- but with Grumiaux and a different violist, the excellent Arrigo Pelliccia, in the two Duos for their instruments (K.423 and 424) that Mozart composed to help Joseph Haydn’s younger brother Michael complete a set of six such works, while holding firmly to his own standards. All this music is rich in rewards -- the Divertimento and the Duos of course being certifiably indispensable -- and none of it has been in better hands.

This set is advertised now by several Internet retailers at less than $20 for the actual CDs, or half that for a download. Its value, of course, is simply beyond price, and no one who regards music as an important part of his or her life, or who even suspects that it might be, ought to consider being without it.