The Art of Johanna Martzy 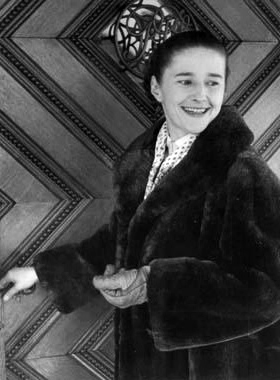 There was certainly no shortage of stellar violinists in the middle of the 20th century. A "short list" might include such names as Jascha Heifetz, Nathan Milstein, Adolf Busch, Fritz Kreisler, David Oistrakh, Arthur Grumiaux, Yehudi Menuhin, Isaac Stern, Erica Morini, Leonid Kogan, Ruggiero Ricci, Josef Suk, Mischa Elman, Zino Francescatti and Joseph Szigeti, all of whom were familiar figures in our concert halls and through their recordings. Aaron Rosand did not turn up much on the concert/recital circuit, but earned great respect and admiration through the discography he built up on Vox. Ivry Gitlis also became known to us through his recordings. Another great artist, whose name may not come to mind as readily as those just mentioned, was the superb Johanna Martzy, who made fewer than a dozen commercial recordings, but whose discography has been increased over the years by her fiercely devoted admirers in Japan, the UK, and various other countries, who have seen to it that all of her broadcast and concert recordings are available -- some of them offered here and there now at rather shocking prices.

Martzy (1924-1979) was born in the Transylvanian city known at that time as Temesvár, Hungary, and now as Timişoara, in Romania. At age seven she was taken on as the last pupil of the legendary Hungarian violin pedagogue Jenő Hubay, who confidently predicted she would become one of the supreme masters of her instrument. She made her first professional tour at age 13, won the Reményi Prize at 16 and the Hubay Prize at 17, a year before her graduation from the Ferenc Liszt Academy in Budapest, in which city she made her orchestral début a year after her graduation, in the Tchaikovsky Concerto, with Willem Mengelberg conducting. In 1944, when the Nazis swept aside their puppet Admiral Horthy to take control of Hungary, Martzy and her husband, Béla Czillery, managed to flee; they were taken into custody in Austria and eventually wound up in France before settling in Switzerland. Her international career was launched in Geneva in 1947, when she again performed the Tchaikovsky Concerto, this time with Ernest Ansermet conducting, and was awarded the violin prize in that year’s International Musical Competition (Concours International d’Exécution Musicale). 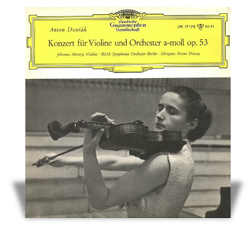 When Martzy performed in Amsterdam shortly after that, she met the pianist Jean Antonioni, with whom she formed a wonderfully integrated recital team; they performed and recorded together throughout her career. In the early 1950s she made a few recordings for Deutsche Grammophon, among them a still incomparable 1953 account of the Dvořák Violin Concerto, with the RIAS SO, Berlin, under her compatriot Ferenc Fricsay (issued in the US on an American Decca LP, DL 9858) and, with Antonietti, a Beethoven sonata and short pieces by numerous later composers.

In 1954 Martzy began recording for English Columbia, one of the two major EMI companies whose releases circulated in the US at that time on the Angel label. Only eight LPs were issued under that contract; Martzy’s relationship with EMI ended abruptly, apparently with her rebuff of amatory advances from the company’s renowned record producer Walter Legge (who shortly afterward married the famous soprano Elisabeth Schwarzkopf). Her recordings for his firm were deleted within a very few years of their release. As issued in the US on Angel, those eight LPs were:

Schubert Rondo brilliant in B minor; Fantasy in C major, with Antonietti, 35366

While Martzy made no further commercial recordings after leaving EMI, she did continue to widen her public appearances. She made her American debut in November 1957 with the New York Philharmonic under André Cluytens, in Bach’s E major Concerto and Bartók’s First Rhapsody. Harold C. Schonberg, reviewing that event for The New York Times, caught in a few words just what it was that audiences and record collectors found so enticing in Martzy’s performances: her "willingness to make an impression as a musician rather than as a virtuoso." 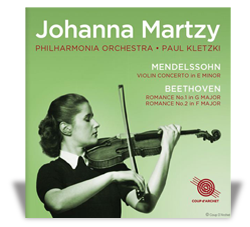 Touring eventually extended as far as South Africa, and in the summer of 1959 Martzy was scheduled to perform at the Edinburgh Festival with the Czech Philharmonic. At the last minute, however, the orchestra pulled out, refusing to perform with her because of claims that she had been a supporter of the aforementioned Admiral Horthy. The Festival operation took it in stride, and on her scheduled dates Martzy performed three concerts with the Royal Philharmonic; one of her three conductors was the Czech-born Walter Süsskind, by then a proud British subject who had lived and worked in London through the Blitz.

Martzy’s marriage to Czilleri had ended by then, and in the following year she married Daniel Tschudi, a prosperous Swiss publisher and amateur violinist whom she had known for ten years, during which time he had lent her priceless instruments from his substantial collection. They eventually had a daughter, after whose birth the violinist’s public performances became less and less frequent. Meanwhile, Martzy’s personal life did not become less dramatic. She had avoided performing in any of the "Iron Curtain" countries, but she also avoided any outspoken gestures, as (a) she did not consider herself a "political person," and (b) her mother still lived in Budapest, and was allowed to leave for a short visit, just before the Edinburgh episode. In 1969 she was obliged to repay that favor by performing in Budapest, and, while she enjoyed an enthusiastic reception there, she also contracted hepatitis. Her condition worsened after she returned to her home in Switzerland. Although she was able to continue performing until 1976, notably in a trio with her compatriots the cellist Paul Szabó and the pianist István Hajdu, happiness and health had left her. Her husband died in April 1978, and 14 months later she herself died of cancer in a Zurich hospital at age 54.

But, as sometimes happens in such situations, Martzy made a posthumous comeback. As the dramatic course of events in her personal life was apparently not all that widely known, it is safe to say that the sustained interest in her recordings was based entirely on the exceptional musical pleasure they afforded. For me, the Dvořák Concerto with Fricsay and the Schubert cycle with Antonietti are the most treasurable parts of her "formal" discography. The Dvořák was kept in DG’s active catalog on no fewer than four successive LP editions, and subsequently on a short-lived CD in the series called "The Originals" (463 651-2). That CD, filled out with Erica Morini’s performances of the Glazunov Concerto and the Bruch G minor, also with Fricsay, was apparently the only CD reissue of any of her commercial recordings by the respective originating company. It is no longer in DG’s active catalog now, but copies, new and used, are being offered on the Internet, in the $70+ range. Amazon.com also lists a download of the entire CD for $9.49, and a Beulah download of the Dvořák alone is available for about $3.

Since the Schubert works with Antoniotti were recorded by Electrola in Berlin, some of them reappeared briefly on LP in the US under the low-priced Mace label, which brought out other material from Electrola, but that incarnation proved to be as brief as the original one, and today a single used copy of one of the English Columbia Schubert LPs is advertised on the Internet for £1000 (about $1600 USD). One of the English Columbia Bach LPs is listed at an even higher price, $2000.

(A correspondent has observed, in a discussion of the high-priced Martzy phenomenon, that records that nobody bought turn out to be "collectibles," at inflated prices, while records by more popular musicians, which sold well, remained current and always at their original prices or less. This means, in essence, that we wind up paying more for something nobody -- or hardly anybody -- wanted. It may be conjectured, too, that the collector who spends $2000 for a used LP may be reluctant ever actually to play it, lest it be damaged in the process and its resale value diminished. If we may extend this thought, we might imagine that the purchaser of a $2000 LP leaves the disc, upon his death, to a favorite nephew, who is not at all reluctant to play it -- and discovers that it contains neither Bach nor Schubert nor violin, but instead, four episodes from the old radio comedy series "Vic and Sade.")

In any event, it is not really necessary to pay such prices for these particular old LPs, because they have been transferred to CDs, and even to new LPs, which sound at least as good as the originals, and in some instances actually better, and all are priced far more reasonably than the shockers noted above. 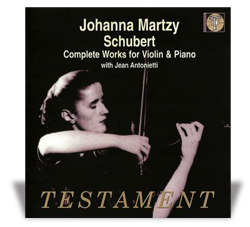 First of all, Testament has brought out all the EMI recordings but the Beethoven romances. The six Schubert works are in a two-disc set (SBT2 1468, $37.98), the Bach in another (SBT2 1467, $37.98), and the Brahms and Mendelssohn Concertos are together on a single CD (SBT 1037, $20.98). The sound is quite good, and the booklet notes, by Tully Potter, are among the attractions of these carefully produced reissues and, as always, of value in their own right. (They are, in fact, the source of most of the biographical information given in this article.)

In addition to the Testament reissues, and to numerous others in various parts of the world, on such labels as Doremi, Lexington and Toshiba (a set of six CDs, The Art of Johanna Martzy, TOCE 11364-69), and in France from EMI’s own branch, the most ambitious of all Martzy reissue projects has just been completed by Coup d’Archet, a company created by Glenn Armstrong in England 15 years ago for this express purpose -- and which emphasizes audiophile LPs even more strongly than CDs, with a publication of an authoritative biography scheduled for the near future.

Like Testament, Mr Armstrong has worked under formal licensing agreements with the respective originators of the various recordings. He has brought out not only all the material issued by both EMI and Deutsche Grammophon, but also some EMI material which Martzy did not approve for release (the Mendelssohn Concerto and Mozart’s G major, K.216, taped with the Philharmonia under Wolfgang Sawallisch about a year before the Kletzki Mendelssohn that was issued and is on Testament) and every "live" recording known to exist from broadcasts and public concerts in various countries.

All this material has been painstakingly prepared, some of it mastered at EMI’s Abbey Road facility. The LPs are audiophile quality 180-gram discs, and limited to 250 copies. All the Coup d’Archet discs, both CDs and LPs, are packaged with an elegance and care for detail in keeping with the treatment of the music itself: luxurious, handsomely designed boxes; exceptionally sturdy inner sleeves; high-quality paper; beautifully presented documentation which includes Mr. Armstrong’s own authoritative and comprehensive annotations. The book, when published, will, like Tully Potter’s Busch biography, have some rare recordings packed with it.

To top it all off, the Coup d’Archet price scale is pretty reasonable. The CDs are £10 each, or about $16; sets of eight or nine are priced at £80, or about $128. The LPs are £30 each (ca. $48, a not excessive price for this kind of pressing), sets of eight or ten, £300 (ca. $480). For a complete catalog and other details, visit www.coupdarchet.com. A detailed discography of all known Martzy recordings, prepared with input from Glenn Armstrong, is available on Youngrok Lee’s music page: http://fischer.hosting.paran.com/music/music.htm