Two Guitarists and a Drummer

John Abercrombie, born in 1944, is among the generation of jazz guitarists influenced by the rock music of the 1960s. Jimi Hendrix had an especially strong impact on jazz players of his generation -- his use of distortion, volume, and feedback soon found its way into their music, as the sound and force of rock music became part of a fusion of jazz and rock that almost immediately came to be called, simply, fusion.

In 1969, Abercrombie joined Dreams, a fusion group that included drummer Billy Cobham and the brothers Michael and Randy Brecker. A few years later, when Abercrombie appeared on three of Cobham’s solo recordings, he played in the aggressive style typical of many fusion guitarists. The Hendrix connection is easy to hear in Abercrombie’s work on The Gil Evans Orchestra Plays the Music of Jimi Hendrix (1975), as well as on two mid-’90s Hendrix tributes by jazz organist Lonnie Smith. 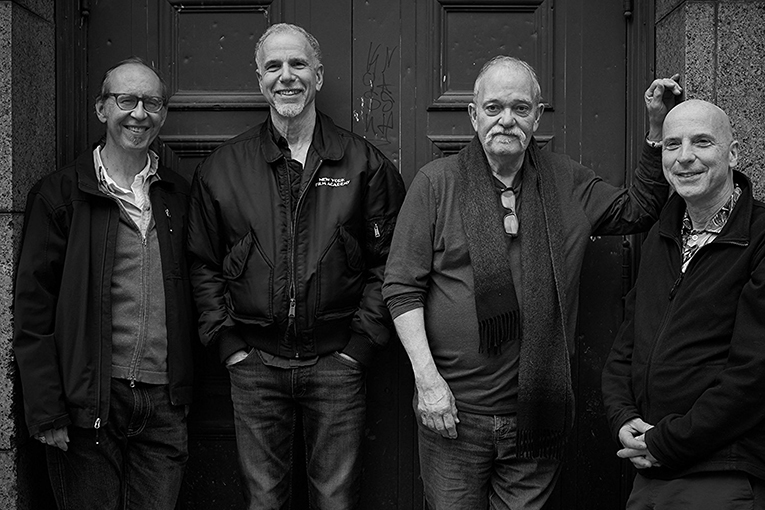 In his own recordings, however, Abercrombie has covered a lot more ground. His first album as a leader for ECM, Timeless (1975), took in everything from ambient music to the sounds of a traditional jazz organ trio mixed with fusion, and in his long association with the label he’s played in a large variety of settings, as both leader and sideman. Some of his most enjoyable recordings were in a quartet with Richie Beirach on piano, George Mraz on double bass, and Peter Donald on drums. That group recorded three albums between 1978 and 1980, which ECM reissued in 2015 as a boxed set, The First Quartet.

In the sessions he led, Abercrombie didn’t again play with a pianist until 2013, when he released 39 Steps with a quartet that featured Marc Copland on piano. Up and Coming (ECM 2528) is his second disc with that group. The guitarist’s association with Copland goes back to the Dreams era, drummer Joey Baron has played on nearly all of Abercrombie’s albums for ECM since 2000, and this is bassist Drew Gress’s third ECM album in a row with Abercrombie. 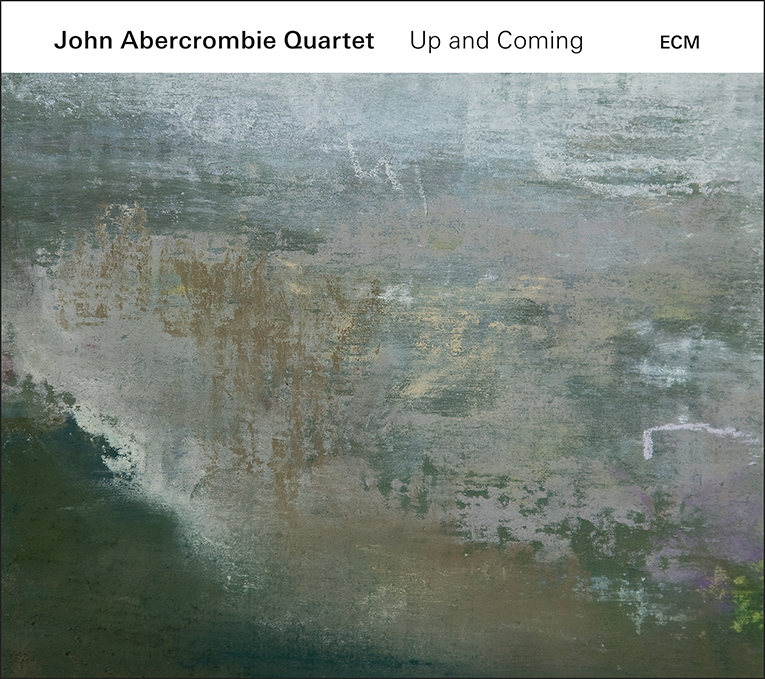 Abercrombie’s “Joy” provides a good example of the kind of subtle, introspective playing he does so well. Even his fusion playing showed a unique tendency to give notes the space and time to develop. The tune unfolds slowly, and despite its title it carries a hint of melancholy, as Copland and Abercrombie slowly move the theme along. Abercrombie’s solo uses dynamics and the careful articulation of each note to make its statement, with lush harmonic accompaniment from Copland and exquisitely detailed background from Baron and Gress.

The brief “Flipside” is a bouncy, joyful swinger, and Abercrombie’s solo is richly toned and melodically compelling. Copland’s chord splashes fill in behind him, and his own solo builds intelligently on the melody while adding a strong emotional current. “Sunday School,” one of the two longest tracks, is delicately played chamber jazz with beautifully controlled ensemble playing. The musicians are so finely attuned to each other that they easily respond to small changes; the piece feels both spontaneous and carefully structured.

Copland’s “Tears” is impressionistic, with a slightly edgy, angular undercurrent. The pianist’s minor chords flow under the melody line, which he and Abercrombie play in tandem. The chord progressions shift the mood between major and minor, and Abercrombie’s solo negotiates the changes in feeling in an emotionally satisfying solo. Gress also plays a nuanced solo that leads into a sensitive and deeply moving statement from Copland. Baron’s brushstrokes on snare and understated cymbal work add color and dimension.

Miles Davis’s “Nardis” is best known in the many versions pianist Bill Evans recorded. This arrangement of the song begins with Abercrombie playing unaccompanied, the band falling in behind him as he probes and explores the melody, expanding on it without losing sight of its beauty. His tone is full and warm, his musical ideas flowing with deceptive ease. Abercrombie stopped using a pick a few years ago, and, as he says in the press release that accompanied Up and Coming, “I play less fast than I used to, less ‘technical.’” Each of his solos is a fulfillment of musical ideas, not a flashy blast of notes.

Abercrombie plays jazz that is both brainy and emotionally engaging, structured and spontaneous. “Flipside” and the title track swing as hard as any jazz lover could want; others build at a leisurely pace. Copland shares Abercrombie’s feel for harmony and dynamics, and interacts with the guitarist in a way that feels effortless, but comes from playing together and developing a musical rapport. Gress and Baron bring that same level of understanding and sensitivity to the eight tracks of Up and Coming -- music by four musicians exquisitely attuned to each other. 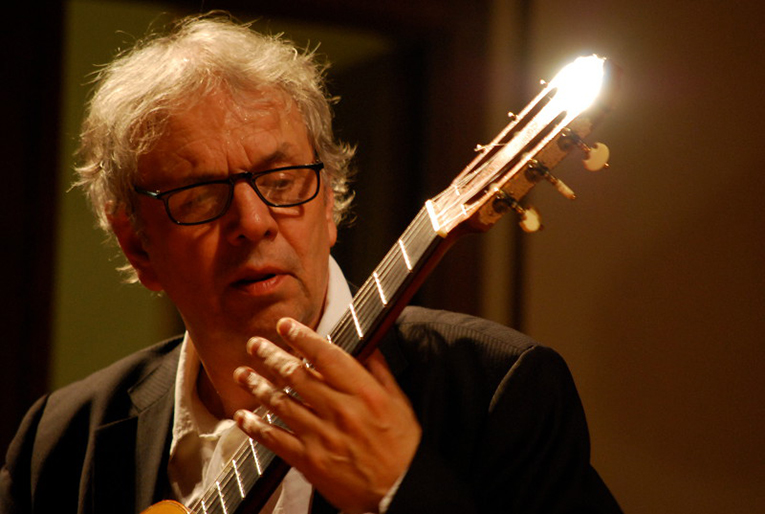 Ralph Towner (above), born in 1940, is a few years older than Abercrombie, and has recorded two albums of duets with him. Towner has played acoustic guitar exclusively, though he sometimes uses synthesizer, piano, and French horn on his recordings and those of Oregon, the group he cofounded in 1970. His association with ECM goes back more than 40 years, and his 22nd disc for them, My Foolish Heart (ECM 2516), is his eighth solo-guitar recording.

Towner’s music takes in jazz, classical, world music, and more, and his technique is impressive without sounding clinical or detached. I thought of Andrés Segovia or John Williams when I heard the stunning run of chords that introduces “Pilgrim.” His fingerpicking skills on nylon-string guitar create a full sound, bass lines running in tandem with the chords, and the piece deftly balances baroque lines and jazz chording. Single-note runs state the melody clearly, and the notes ring cleanly, the reverb giving them fullness and sustain.

“I’ll Sing to You” continues in classical-guitar vein, though the melody and chord changes have a jazz undercurrent. Towner again demonstrates an astonishing ability to create harmonic complexity in ways that are technically dazzling without sounding like showy display. His arpeggios in “Saunter” give the composition a wonderfully buoyant and upbeat quality without becoming sentimental. 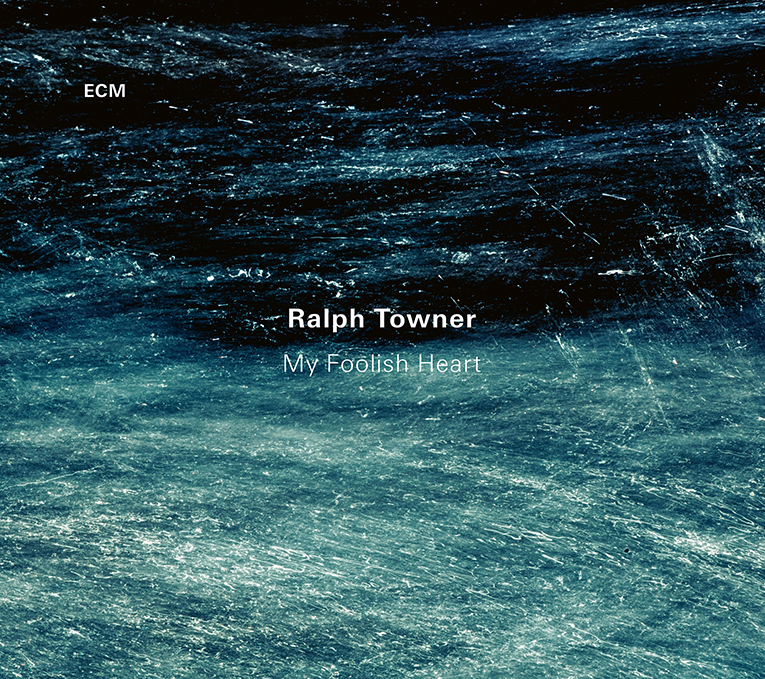 The great Bill Evans has been a strong influence on Towner, and Victor Young and Ned Washington’s “My Foolish Heart,” which the pianist recorded on Waltz for Debbie in 1961, captures the romanticism and lyricism of his playing. Towner hews close to the melody, but expands on it and gets to its heart. He uses harmonics, quick single lines, and great washes of chords to fully explore the song, and his bent notes, played against higher open strings, give his playing a soulful feel.

The pastoral “Dolomiti Dance” is both baroque and modern, with a jaunty, almost danceable air. Towner plays “Clarion Call” and the brief “Biding Time” on 12-string guitar, whose steel strings have a much brighter sound than the classical guitar. His playing is somewhat more aggressive on these two tracks, without sacrificing the melodic inventiveness that is the essence of his work.

“Blue as in Bley” is Towner’s tribute to Paul Bley (1932-2016), who died a month before Towner recorded My Foolish Heart. True to its title, the song has a deep blues strain that Towner weaves into an affectionate, slightly melancholy memorial to a great musician. Towner revisits two compositions he first recorded with Oregon, “Shard” and “Rewind.” The first is a complete reimagining of a tune from the very first album Oregon released, Music of Another Present Era (1972), and is more structured and tonal. “Rewind” is easily recognizable, retaining the original’s upbeat feel while being more engaging.

Recorded in Lugano’s Auditorio Stelio Molo RSI, My Foolish Heart presents the full measure of Ralph Towner’s music while remaining approachable and wholly enjoyable. I was frequently dazzled by his abilities, but was just as often moved by the beauty of his melodic invention and his emotional commitment to his music. The recording captures the dimensions of the recording space and brought his guitars into my listening room.

The drummer Andrew Cyrille has appeared on jazz recordings since 1961, when he played on records by Coleman Hawkins and Walt Dickerson. Over the years he’s played with Carla Bley, Charlie Haden, Anthony Braxton, Geri Allen, and, perhaps most notably, Cecil Taylor. Although Cyrille has led many sessions for other labels, The Declaration of Musical Independence is his first for ECM. 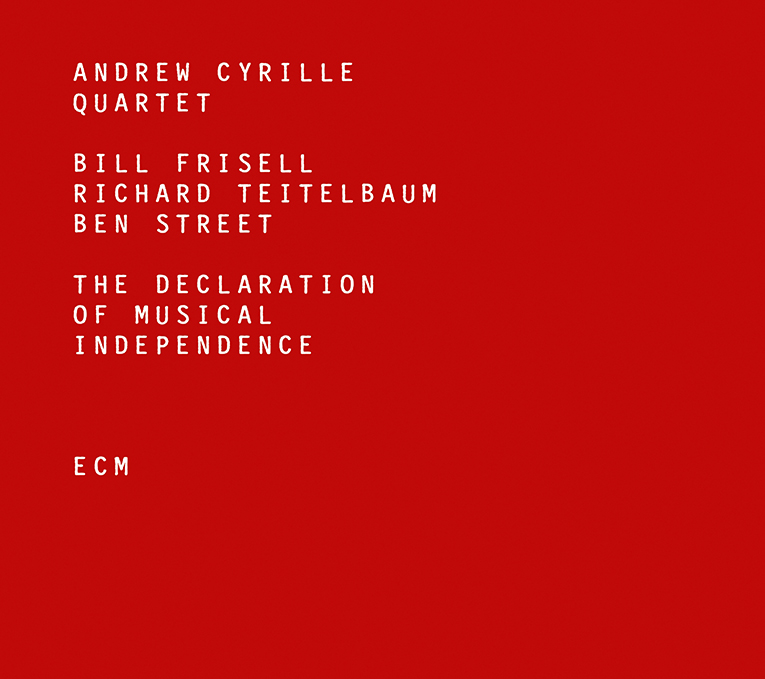 It says something about Cyrille’s strengths as a bandleader and his own distinctive playing that he’s not overshadowed by the guitarist on this album, Bill Frisell. Frisell is a distinctive and recognizable player, but Cyrille’s adventurous spirit defines The Declaration of Musical Independence. His martial drumming announces “Coltrane Time,” and he gives the track its shape and spirit. Frisell uses distortion and feedback to create an air of dissonance and tension, and Richard Teitelbaum’s keyboards help give the track its slightly ominous feel. Ben Street’s double bass gives the song a foundation that helped me find my way through the complexity.

Frisell’s “Kaddish” is a mournful and beautiful piece that he plays unaccompanied for almost half of the track’s five minutes, but when Cyrille enters, his rumbling percussion underlines the song’s sadness -- and Teitelbaum, playing synthesizer lines that sound like a clarinet, emphasizes the composition’s somber tone. Teitelbaum’s synth also supports Frisell’s sustained chords in “Song for Andrew No.1,” as Cyrille’s stuttering drums and cymbal splashes give the track its dark focus and structure.

Cyrille plays soft brushstrokes in Ben Street’s “Say . . . ,” Teitelbaum’s piano chords creating the harmonic tone of the song and Street’s bass lines giving it form. Street and Teitelbaum set the rhythmic pattern, while Cyrille’s percussive commentary provides atmosphere. It’s Cyrille who keeps swing time in Teitelbaum’s “Herky Jerky,” which flies off into near chaos while managing to keep its footing.

Three tracks are credited to all four players. Though occasionally evocative of early-’70s Miles Davis, “Sanctuary” transforms, grows, and mutates, all members of the band helping to create a percussion piece that is gripping and impressive. “Manfred,” a tribute to Manfred Eicher, cofounder and chief producer for ECM, is heavily atmospheric, Frisell and Teitelbaum interacting in free-jazz style against Cyrille’s drum stabs and Street’s snapping bass lines.

“Dazzling (Perchordally Yours)” opens with Cyrille hitting a gong, then playing wooden and metal percussion before the band enters with a crash. Teitelbaum again creates a tense backdrop; it swells, then becomes darker and more enveloping. At ten minutes, this is by far the longest track on the disc, and it’s dramatic, unsettling, and rewarding in the resolution of its many strains.

Cyrille’s musical bravery matches his formidable skills as a percussionist. On this album he sets a high standard of adventure and experimentation -- his band members build on it by reacting to the sounds and rhythms he establishes, especially in the freer sections. The three collectively composed tracks are the most difficult and challenging and the most rewarding, but this disc is satisfying and enjoyable throughout.

Up and Coming and My Foolish Heart were produced by Manfred Eicher, The Declaration of Musical Independence by Sun Chung. The sound quality of all three meets ECM’s high standard, and continues the label’s long tradition of recording and releasing good, often unusual music. In these times, that three long-established American musicians still have a place to bring their music to is a very good thing.