The Blues Magoos on Sundazed

My oldest sister and I went to Catholic school through grade school, and we caught the bus each morning in front of a house a few doors up. The girl who lived there, Ellie, went to school with us and was a couple of years older than me, and in 1966 she was discovering rock'n'roll. One morning, she called us into her house to listen to two singles she had bought. I immediately recognized the first record she put on her parents' console. "I'm A Believer" was all over AM radio, and it had moved up the charts with a lot of help from The Monkees television show. I still like that record. It's a well-crafted bit of pop fluff, and even knowing that the Monkees themselves didn't have much to do with it aside from singing to a track provided by studio musicians hasn't dimmed its effect over the years.

The other record she played was something else entirely. "(We Ain't Got) Nothin' Yet" opened with the tinny sound of a Vox Continental organ, mixed with a couple of sustained guitar chords and what to this day still sounds to me like an electronic harpsichord. A thumping bass line -- lifted, I now know, from Rick Nelson's version of "Summertime" -- followed the intro for a couple of bars before the rest of the band kicked in for the first verse. The vocal was closer to a recitative than a melody, and the playing sounded both aggressive and polished. 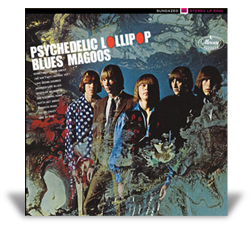 "(We Ain't Got) Nothin' Yet" was the only Top 40 hit the Blues Magoos would ever have, but it was garage-rock heaven. Emil "Peppy" Thielhelm aka Peppy Castro (vocals and guitar), Dennis LePore (lead guitar), Ralph Scala (organ and vocals), Ronnie Gilbert (bass) and John Finnegan (drums) made a record that sounded vaguely rude, with lyrics that were hard to understand, and it was the sound of something new and dangerous. I could imagine my mom liking "I'm A Believer." I could only see her recoiling in horror if she had ever heard "(We Ain't Got) Nothin' Yet," and she'd have been appalled if she ever saw a photo of the Bronx quintet that played it.

Sundazed Records has reissued the first two Blues Magoos albums on CD and vinyl, and you can see the band in its sartorial glory on the beautifully reproduced, brightly colored covers for the LPs. The band called its first record Psychedelic Lollipop, making these guys and the Thirteenth Floor Elevators among the first to use that word in an album title. Any parent looking at the cover of Psychedelic Lollipop in 1966 must have had their worst fears about rock'n'roll confirmed: "First the Rolling Stones, and now this!" The band members' hair is inching down toward their shoulders, their clothing is daring and hip, and the back cover proclaims that the record was "Produced by Bob Wyld and Art Polhemus for Longhair Productions."

I don't have the CDs to compare them to, but the Sundazed LPs of these recordings, mastered from the original Mercury Records analog tapes, pull you right into the band's psych and garage-punk vision. Psychedelic Lollipop shows their versatility, from the three-minute rush of the single to the rave-up blues of "Tobacco Road," which veers off into a strange psychedelic, slightly Middle Eastern-sounding jam. Lenny Kaye chose the latter tune rather than the hit for his Nuggets collection. Their version of James Brown's "I'll Go Crazy" slams as hard as any R&B cover by Them, Van Morrison's legendary '60s group, and "Love Seems Doomed," one of four tunes by the band, is a well-crafted pop song that was one of several potential singles from the LP.

"Gotta Get Away" was on the flip side of "(We Ain't Got) Nothin' Yet," and if DJs had turned the record over it might have been the hit. Scala's Lowery organ sounds menacing, LePore's lead guitar solo slashes deeply, and when Thielhelm/Castro sings "Gotta get away / I want to be free," it's a cry from the heart of every kid who would soon join the counterculture. Psychedelic Lollipop is a high-energy, 30-minute blast of rock'n'roll -- even the pop songs have a kick to them. Like many bands at the time, the Blues Magoos threw everything they had into their debut, trying to find their way in a rock world that was still defining itself. 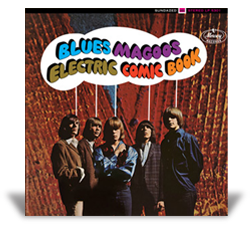 The band turned up the fuzz tones in 1967 for their second LP, Electric Comic Book, and wrote ten of the 12 tunes. Guitars glide between channels and feedback plays a prominent role, especially on an epic six-minute cover of Van Morrison and Them's "Gloria." That track is the high point of the record -- the band brought something new to a tune that was covered by nearly every band formed during those years. The spring-loaded reverb on the amps rings out ominously and the band jams on the tune in full psychedelic noise mode while maintaining a garage-rock edge. The LP included the band's second single, "There's a Chance We Can Make It," which was only a minor hit. The acid-drenched guitars and the exhilarating distortion on the Vox Continental may have been a few months too early.

"Albert Common Is Dead" and "Life Is Just a Cher O'Bowlies" are two indefinable novelty tunes, playful reminders that bands weren't taking themselves too seriously yet. "Baby, I Want You" sounds like another potential hit from this distance, which makes me wonder why Mercury seemed to miss so many opportunities to put this band over. "Rush Hour" is a great burst of garage anarchy, a reminder, along with "Gloria," that the Blues Magoos were perhaps at their best when they were loud and slightly unrefined. Electric Comic Book is an enjoyable time capsule of 1967, but overall it's not as consistent as its predecessor. Still, any album that includes "Gloria," "Rush Hour," and "There's a Chance We Can Make It" is worth owning.

The Sundazed reissues are pressed on standard-weight, quiet vinyl and the mastering is up to the label's usual standards. The lead vocals are clear and the voices in the backup vocals are easy to pick out in the mix. You can hear the distinctive guitar tones, whether played clean or distorted, and the drums have plenty of snap. Ralph Scala's Vox Continental rushes out of the speakers untamed. The covers, as I noted above, are beautifully reproduced, and Electric Comic Book includes a reprint of the four-page comic that came with the original pressings. Both LPs are worthy additions to Sundazed's formidable catalog of psychedelic-era records.

The original lineup of the Blues Magoos recorded one more LP for Mercury, Basic Blues Magoos. Another demonstration of the band's ability to grow and adapt, it leans in the direction of folk-rock but features a creditable version of the Move's "I Can Hear the Grass Grow." I hope Sundazed will release it on vinyl soon. After three albums that sold beneath expectations, the original group split up. Castro took a different batch of musicians to ABC Records for two more releases, Never Going Back to Georgia (1969) and Gulf Coast Bound (1970). Those records have little in common with the anarchic thrill of the band's first records. Stick with the first two in these great pressings.