Bethlehem Records was never a powerhouse like Blue Note or Verve, but at its peak it released a lot of worthwhile jazz recordings. Established in 1953, its roster included well-known jazz artists (Charles Mingus, Mel Tormé, Art Blakey), as well as less famous musicians who deserved a wider audience (Sal Salvador, Frank Rosolino). Its album covers caught the eye, and it gave its musicians free rein.

The label remained active until 1970, by which time it had been purchased by R&B giant King Records. In the years since, several companies have acquired and reissued its records, with Rhino Records ensuring availability of many Bethlehem titles into the CD era. In 2010, Verse Records obtained the rights to Bethlehem’s catalog, and Naxos of America is the distributor of a new series of reissues.

Of the first batch of releases, I listened to the Chris Connor EP and the Dexter Gordon LP. The covers are the thin cardboard that is the current standard, rather than the heavier stock that housed the LPs in the original editions. The photo reproduction on the Chris Conner cover is good, and the colors and lines of the drawing on the Dexter Gordon are clear and sharp. Both LPs are pressed on 180gm vinyl. 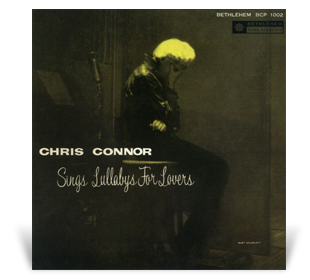 Chris Connor had been singing professionally for six years when, in 1953, June Christy recommended her to Stan Kenton. Christy was leaving Kenton’s band, and thought Connor could take her place. Connor’s platinum-blonde hair and Nordic good looks made her a striking figure behind the microphone, and she gave Kenton a hit with “All About Ronnie.” After less than a year with him, she struck out on her own to sing with smaller groups, signed with Bethlehem, and in August 1954 recorded Sings Lullabys for Lovers with Vinnie Burke’s quartet and drummer Art Mardigan.

Connor was often thrown in with other “cool” jazz singers, such as Christy and Anita O’Day, but she had a distinctive voice. She was less rhythmically elastic than O’Day, but more emotionally engaging than Christy. She sings the opening lines of Billy Strayhorn’s “Lush Life” swiftly, shadowed by guitarist Joe Cinderella, but she doesn’t cram the words together. She sets the tone of the story in the first few lines, so when she slows down after the opening the story unfolds more dramatically. She trusts a lyric the way a stage singer does, but gives it a jazz singer’s rhythmic feel.

She sings “Cottage for Sale” with a hint of sadness, and her pauses before some of her words give emphasis and help paint a picture of regret. She gives the Gershwins’ “How Long Has This Been Going On?” a hint of jauntiness, but when she sings a line like “I know how Columbus felt / Finding another world” she invests it with such conviction that the song takes off. (By the way, the cover lists the song as “How Long,” and, yes, it spells the plural of lullaby as Lullabys.)

Singing with a small group highlighted Connor’s strengths. She often let stops or hesitations tell her story, and her shows of vocal prowess, such as the high notes in Gordon Jenkins’s “Goodbye,” are unforced. A smaller group gave her space to show how much she could do, and helped bring her talents into greater relief. Burke and the other players are so understated that only a return to the EP for a second listen revealed their solid backing. Don Burns’s accordion seemed too quaint at first, but it emphasizes this recording’s small-club feel.

The mono recording gave Connor’s voice prominence, with the group somewhat back in the mix. Joe Cinderella, Burns, and Ronnie Odrich on clarinet and flute, come forward for solos, and the recording creates a convincing sense of space. Considering the age of the master tapes and the often-questionable storage practices of small labels such as Bethlehem, the sound of Lullabys for Lovers is exciting and bright. Six of the tracks from this EP would later find their way onto the LP Sings Lullabys of Birdland [sic]. I compared my LP to the tracks on the EP, and they’ve retained a lot of their original punch. It’s a wonderful EP to have back in print. 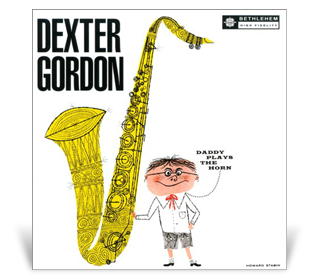 According to the most reliable discography I could find, Dexter Gordon recorded his first session as a leader in 1945. He recorded as a leader over the next ten years for Savoy, Spotlight, and Dial, in addition to appearing as a sideman on countless other records. Daddy Plays the Horn, recorded in Hollywood in 1955, seems to have been his only Bethlehem release.

Gordon’s quartet for the session included two West Coast stalwarts: bassist Leroy Vinnegar and drummer Lawrence Marable. Pianist Kenny Drew was living on the West Coast at the time of this meeting with Gordon, but would soon return to New York for a few years before moving to Europe in 1963. While Daddy Plays the Horn is not a prominent title in Gordon’s discography, it’s an example of the distinctive style he would bring to full flower during his Blue Note years, beginning in the early ’60s.

The bluesy title track brings the band out in force, with Gordon showing a bit of Lester Young’s influence but with his own distinctive feel for time. He liked to play just behind the beat, which felt relaxed or laid-back, but there was always a fire burning underneath. He interjected quick bursts of notes for emphasis and variety, and developed his ideas with cool precision. Drew’s solo is an enticing blend of blues and swing, full of bravado and melody. His chords lay down a firm harmonic foundation for Gordon, and his quick thinking feeds the leader’s improvisations.

The group’s take on Charlie Parker’s “Confirmation” has a different kind of energy from the original because Gordon, though clearly influenced by Bird, smears notes and takes the tune at a more relaxed pace. Drew again livens things up with an energetic solo, while Vinnegar and Marable take good advantage of their solo shots. Two ballads, “Darn that Dream” and “Autumn in New York,” show Gordon’s versatility. He was as sensitive with ballads as Ben Webster, and as respectful of the writer’s intentions -- he recited the lyrics to himself before he played.

Gordon and Drew worked together again many times, but he played with Vinnegar and Marable on only a handful of other sessions. Whether on ballads or on the fast, exciting closer, “You Can Depend on Me,” they swing hard, and their interplay makes one wish they’d done more together. Marable and Vinnegar are a tight unit, and Drew’s playing is a constant delight -- fast, agile, and full of surprises.

The sound on Daddy Plays the Horn is a little flat, but entirely listenable and atmospheric. The instruments register clearly, but in contrast to the Chris Connor EP the recording is less immediate. My guess is that both Daddy Plays the Horn and Lullabys for Lovers were remastered from digital files, but at 24-bit/96kHz. They don’t sound edgy or digitally harsh, but I found that the tracks on my copy of Connor’s Sings Lullabys of Birdland sounded warmer overall than the same tracks on the new EP.

Once again, I’m guessing, but the pressings have the slightly jagged outer edge typical of Rainbo Records, a pressing plant in California. I’ve generally been pleased with their work, and these records are quiet and very well made.

Bethlehem’s vinyl reissues for the next few months include titles by Donald Byrd and Pepper Adams, Zoot Sims, and Johnny Hartman. I hope we’ll also soon see LP reissues by Charlie Mariano, Sal Salvador, and many of the other musicians the label recorded. These first offerings bode well for the series.