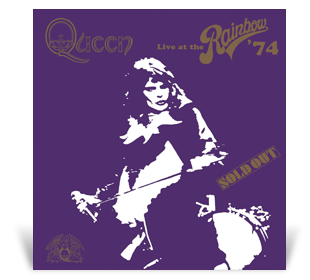 I haven’t been able to find out if music videos on DVD and Blu-ray have increased in sales, but I know I’m seeing more in stores and getting more to review. Many are released by Eagle Vision, a subsidiary of Eagle Rock. Some are documentaries, but the bulk are concerts. In some cases, the live shows are archival and take us back to a band’s beginnings, where we can see and hear when the group found its moment and solidified its vision.

That’s certainly the case with Queen: Live at the Rainbow ’74 (DVD, Eagle Vision EV306799). The band had been building a following with tours behind Queen and Queen II, and had just released Sheer Heart Attack when they appeared at London’s Rainbow Theatre in late November. Although the first two albums did well in the UK, Sheer Heart Attack was a hit in the US as well, and produced a hit single, “Killer Queen.” Eagle Rock has released Live at the Rainbow ’74 on DVD and BD; on two CDs; as a deluxe package comprising both the BD and CDs; and in two vinyl releases: a two-LP set, and a four-LP collection that includes a March 1974 performance.

Guitarist Brian May’s “Procession” plays as the band arrives by limousine and gathers backstage. A few brief sequences show them as they change from street clothes into stage costumes and makeup, but even their regular attire was pretty flashy. As May hits the hard, loud chord that opens “Now I’m Here,” it’s obvious that Queen wanted to grab its audience by the throat and not let go. Roger Taylor’s big drum sound was a ’70s hallmark, and helped solidify Queen’s reputation as a formidable hard-rock band.

The 24 songs from the November performance reveal a tremendous range of songwriting that takes in everything from rock’n’roll to show tunes. They also show how versatile and tightly rehearsed this band was. Queen sang beautiful, complex harmonies in songs that were catchy and, at the same time, hard hitting. At this point in its career, the band was so sharp that their songs lost none of their nuance or power when they played them live. They could reproduce their recordings without compromise, including the vocal harmonies.

But whatever talents Queen had as a performing unit, it was singer Freddie Mercury’s undeniably vivid stage presence and remarkable singing style that captured the public’s attention and gave focus to the band. He is clearly a star on Live at the Rainbow ’74, and his confidence pulls you in. He could sing as powerfully as any singer in rock, but he had a stage actor’s sense of drama and nuance.

Queen wasn’t mounting big stage productions at this point in its career, but lighting director James Dann helped create excitement and reinforce the band’s stage presence. All four members are at ease performing, but Mercury and May are the center of attention because they have such visual flair. Still, it’s the sound of the band that is the most impressive feature of Live at the Rainbow ’74. They’re razor sharp, each musician finely attuned to the other members of the band but keeping the edge that makes rock exciting. The tunes, from Queen, Queen II, and Sheer Heart Attack, are far more exciting here than in their studio versions.

Four tunes from a March 1974 performance are included as a bonus. The film is grainier, and the band, while exciting and showing promise, is much less precise and at ease than they would be the following November. Queen went on to be even bigger stars than they were in late ’74, but on that night at the Rainbow, still young and eager to prove themselves, they delivered. The 16-bit/48kHz PCM stereo sound is viscerally powerful, but the 24/96 DTS Surround Sound is more spacious, and captures the character of the instruments more accurately. 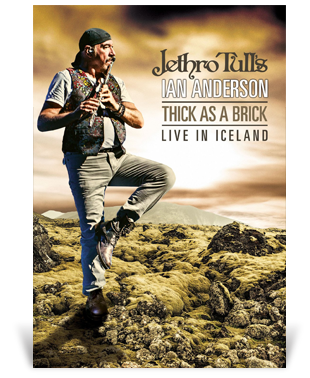 When Ian Anderson traveled to Iceland in 2012 for a concert performance of Thick as a Brick, which had been released in 1972, he was well past having to prove himself, as Queen had to in 1974. Jethro Tull, the band he led for more than 40 years, was just about as well known as a rock band could be. Anderson did have something new to introduce: He’d composed a sequel to Tull’s successful 1972 LP, Thick as a Brick, a record as notable for its cover art, a replica of a tabloid newspaper, as its music. The music wasn’t overshadowed by the extravagant cover art, though, and the original recording has stood up well.

On Thick as a Brick: Live in Iceland (DVD, Eagle Vision EV306729), Anderson and a four-piece band, along with a vocalist/mime, perform the original and its sequel at Reykjavik’s Harpa Concert Hall. Two of the band members, keyboard player John O’Hara and bass guitarist David Goodier, had played in a late version of Jethro Tull. Guitarist Florian Ophale and drummer Scott Hammond have also toured with Anderson, and their extensive résumés include work with a wide variety of other musicians.

Singer Ryan O’Donnell helps fill out the vocals onstage, since Anderson often dubbed instruments over his own vocals in the original recordings, making them “an impossible task for reproduction without an additional pair of hands and lungs.” Anderson’s website credits O’Donnell with “vocals, mime and general stage tomfoolery.”

The stage performance of Thick as a Brick opens with a video of Gerald Bostock, the subject of many of the articles in the newspaper that accompanied the original LP, and helps reestablish the light humor that runs through that work. The camera films from Bostock’s point of view as he visits his psychiatrist. “Tell me how it all began,” suggests the psychiatrist -- Anderson in a bad toupee -- and the music begins.

The performance still required some help. For example, Anderson’s flute lines in the opening are on a recording that plays behind him as he sings and plays acoustic guitar. Anyone familiar with the original album will notice subtle differences in background vocals and instrumental passages, as interpreted by the new players. Ophale is a solid guitarist, but he doesn’t sound like Martin Barre, and it takes a moment to adjust to the difference.

The piece comes together well in the end, and Anderson’s humorous interludes, including a public-service bit about prostate cancer, give it structure. In another amusing moment, violinist Anna Phoebe phones Anderson onstage, and he invites her to join him on Skype to play her part.

A YouTube documentary about St. Cleve, Bostock’s fictional hometown, leads into Thick as a Brick 2: Whatever Happened to Gerald Bostock? Anderson imagines several possibilities for Bostock as a middle-aged man, and the music is more wistful and restrained than that of its predecessor. He recycles some musical ideas from TAAB, but briefly, as whispers from the past. The lyrics, too, are less cutting -- songs like “Might-Have-Beens” have a poignancy the first album lacked. On the other hand, “Old School Song” is as dark as anything Anderson’s written.

The group performing TAAB2 also was the band for the studio recording, and so didn’t have to worry about being lost in the long shadow of Jethro Tull. The music flows more easily than in TAAB, perhaps because the musicians feel more comfortable, or maybe Anderson himself has relaxed a bit. The original was meant to be, in part, a parody of progressive-rock and concept albums, and came to be embraced as an embodiment of both. TAAB2 tells a story and lets the music help it develop.

The band is very good and very well rehearsed, but Goodier’s bass playing stands out for its effectiveness in giving the music backbone and focus. O’Donnell sings uncannily like Anderson, and frees him up to play flute, but I suspect he enabled Anderson, then 65, to get through a two-hour performance without becoming too fatigued. The remaining musicians give Anderson what he needs, but on occasion seem too formally trained to play rock, even Anderson’s somewhat demanding form of it. Despite that small reservation, the performance is stirring and often moving.

Extras include an interview with Anderson, two songs from a concert in Montreux in 2012, and a performance with the late Claude Nobs, founder of the Montreux Jazz Festival, who plays harmonica. A two-CD version of the recording is available through Eagle Rock. 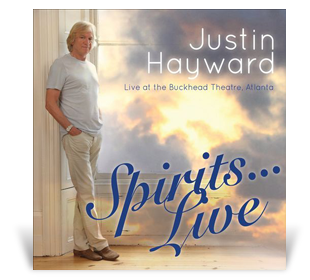 Justin Hayward’s Spirits . . . Live (DVD, Eagle Vision EV306749) is a 2013 live show from the Buckhead Theatre, in Atlanta, when Hayward was touring in support of his CD Spirits of the Western Sky. This show was a more modest affair than the other two discussed here. Hayward, on acoustic guitar, is supported by a three-piece band: Alan Hewitt on keys and vocals; Julie Ragins on keys, percussion, and vocals; and Mike Dawes on guitars. Hayward draws on his solo recordings, as well as on tunes he wrote and sang with the Moody Blues.

Two of Hayward’s best-known tunes, “Tuesday Afternoon” and “Nights in White Satin,” benefit from the stripped-down arrangements, although on the latter Hewitt provides a good approximation of a Mellotron. Many of the Moody Blues tracks here still sound fresh and benefit from the more straightforward presentation. Hayward’s voice is strong, and he hits the high notes without effort. Dawes, a fluid and understated guitarist, is a prime reason to watch this DVD and listen to its CD counterpart (Eagle Rock ER203632R1).

The video is presented in 16:9, and the audio choices are DTS Digital Surround, Dolby Digital Surround 5.1, and Dolby Stereo. Once again, the DTS sound edges out the other choices. Spirits . . . Live is not essential or revelatory, but in its modest way it’s very enjoyable.

Note: All of these concerts are also available on Blu-ray, where the sound choices are DTS-HD Master Audio multichannel 24/96 and PCM stereo 24/96.