At this point, there seems to be little doubt that downloading will replace discs for home reproduction of music. CD sales are down, downloads are up, and HD downloads have become more plentiful. The same thing is happening even more rapidly with video. Will we have discs at all in five years, ten years, and beyond? My guess is that we’ll still have some, as many people want a product to hold in their hands and will therefore find downloads a bit too intangible. But my educated guess is that discs -- CDs, DVDs, and Blu-rays -- will exit the mainstream and become niche markets for the collector.

One thing that might keep discs hanging around longer is surround sound. Yes, you can accomplish surround sound with downloads, and some of the HD download sites offer it, but at this point it’s complicated and most of the downloading is two-channel stereo. Surround has been available for the SACD and DVD-Audio formats for some time now, but those formats have become niche, and they still require the purchase of a special or universal player. The always enterprising label Naxos was instrumental in trying to get both of those formats to fly, but they finally gave up when the releases just didn’t pay for themselves.

Now Naxos is back with surround sound, this time on Blu-ray, with a handful of high-definition audio-only discs and another batch promised throughout 2011. Perhaps the hope here is that anyone with a Blu-ray player can enjoy these discs, and those who have their Blu-ray players connected to a surround-sound audio system can enjoy them in 5.0 or 5.1 sound. Naxos has kept it simple, providing just stereo PCM and DTS-HD Master Audio multichannel tracks. These are coordinated to the color controls on a Blu-ray player’s remote: green for stereo and red for multichannel. The first release seems to have been recorded at 24/88.2 but presented on the finished disc in 24/96.

The Nordic audiophile label 2L has already released a number of audio-only Blu-ray discs, but the Naxos release marks the first time the format has been tried by a mainstream label with some commitment to the future. It will be interesting to watch and see if other major labels pick up on the Naxos lead, if pop music and jazz producers get the idea, and if sales will be brisk enough to warrant the continuation of HD surround Blu-ray at all. In the meantime, here’s what Naxos is offering, and the recordings below will be followed by Mahler: Symphony No.8; Vivaldi: The Four Seasons; Szymanowski: the complete symphonies (Antoni Wit, conducting); Schubert: Complete Overtures; and Schumann: Faust. Naxos will also release Bach’s B Minor Mass conducted by Müller-Brühl, which they previously released on multichannel SACD and DVD-Audio. 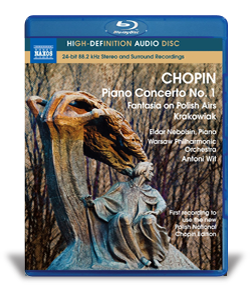 Nebolsin is a new name to me, but according to his biography he’s relatively well known, having played with many of the major orchestras of Europe and the United States. His playing is fleet and his technique sure. Most important, he seems to thoroughly grasp the mercurial lyricism of Chopin’s writing. The orchestra in Chopin’s two concertos is relegated mostly to accompaniment, and for that Antoni Wit and his Warsaw musicians seem almost overqualified. They provide a steady and solid background tapestry on which Nebolsin skillfully weaves Chopin’s beautiful melodies and variations. I have a great fondness for the Krakowiak, which is seldom recorded and is rarely given as virtuosic a treatment as this one. Though it’s usually considered bottom-drawer Chopin, I love its puckish melodies and elegant humor, which Nebolsin and Wit get exactly right. The recorded sound is rich and detailed, but the front soundstage seems to be lacking in depth. The multichannel tracks anchor the piano in the middle speaker for greater clarity and provide just a slight touch of reverberation, which results in those tracks having greater warmth than the stereo ones. A companion disc (NBD0012) contains the second concerto, Variations on Mozart’s Là ci darem la mano, and the Andante spianato and Grande Polonaise brillante. 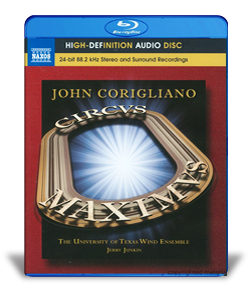 Full of fanfares, sound effects, and a band marching up and down the aisles, this music, like Leonard Bernstein’s Mass, simply must have surround sound to be fully effective. The music is a vision of Circus Maximus, where the Romans held chariot races and allowed humans to be devoured by lions. “Just another Sunday show,” writes Corigliano in his program notes. Logistically the piece involves a stage band, a surround band, and a marching band. The locations of these and other instruments, such as the saxophone quartet and bass that are heard in the second movement, “Screen/siren,” are provided on a chart laid out with clarity in the notes. Exotic percussion instruments are the norm, and the work ends with a resounding gunshot. Being surrounded by this immersive music is a lot of fun, and it’s a darned good demonstration piece for your surround system. Be warned that the dynamic range of the recording is very wide: hushed passages are barely audible, while the louder ones are of the lease-breaking variety. Junkin’s readings are alert and precise, and he brings a sense of lyricism to the more melodic Gazebo Dances that round out the disc. The two-channel recording here seems ridiculously narrow and restricted by comparison. 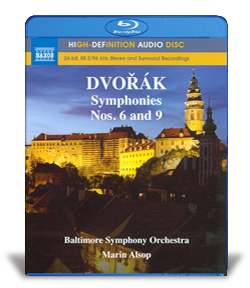 Marin Alsop gets everything right in the “New World” symphony. Her tempos are insistent and dramatic, her melodic instincts are passionate and bold, and she has her Baltimore musicians playing with fever-pitch precision and resounding tone. This performance, combined with Andrew Walton’s production skills, which create a warm and lively sound with excellent presence, offers a reading that holds up to most of the others in any format. Maybe it was Walton’s presence, as the sixth symphony was produced by Steve Epstein and seems a more dutiful and drier affair that can’t compete with the radiant and driven performances of Istvan Kertesz and Rafael Kubelik, even though the Baltimore Symphony plays wonderfully throughout. There’s a second, companion Blu-ray (NBD0010) with the somber seventh and sunny eighth symphonies. Eight, not seven, is Alsop’s lucky number on that disc, though both recordings, engineered by Epstein, are somewhat dry. The sixth and ninth symphonies contain filler pieces on the CD version, but those are left out here. Their absence seems odd, since Blu-ray is supposed to offer remarkably extended playing time.

For those with Blu-ray players, these discs are well worth investigating, though they could be a case of too little too late.