Who knew that something as simple as putting together a fantasy system would give me such a headache? It didn’t take long before some of you challenged me: “Why not amp X?” or “Why not amp Y?” Perhaps I should have been clearer about my intentions. This exercise in system-creating is not to establish some must-own concoction but to emphasise precisely the opposite: that there exists an infinite number of choices. Indeed, I will be surprised if, after this series concludes, anyone on the planet puts together the same package.

Moreover, I am not interested in getting any grief from the hundreds of other amp manufacturers with wonderful products that would suit: Rogue, Coincident, Quad, PrimaLuna, Icon Audio, Musical Fidelity, Unison Research, NAD, Denon, and far too many others to namecheck in the cause of peace. This system is as much about chance and accident as it is about careful calculation. These are products which simply happened to end up in my listening room for various reasons. E.g., I bought the Bob Carver Crimson 275 (see last month’s column) on the strength of Josh Bizar’s recommendation, as he’s sold so many of them at Music Direct. 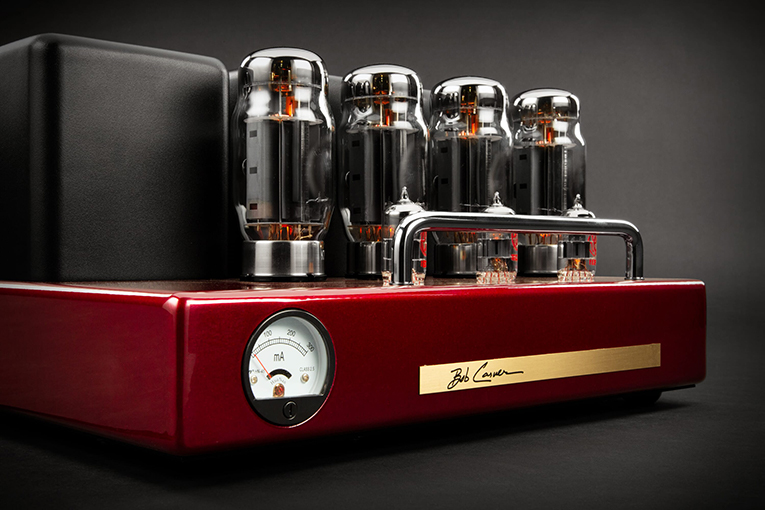 Let me repeat: it’s about possibilities while consciously—nay, deliberately—avoiding the defaults. Sometimes, one needs to act in an arbitrary manner just for the hell of it, like ordering a Quarter Pounder with Cheese instead of your usual Big Mac. So, to reiterate, the object here is to put together an LP-only system of tube preamp, tube power amp, turntable/arm/cartridge package, and speakers for $6000, assuming a ten percent discount for cash (but not counting local taxes—your problem, not mine). I am thus to stay under $6670 at retail less taxes, give or take a couple of bucks.

As you can surmise, then, it’s arbitrary on one level, intentionally contrary on another, arguably stupid on a third. It’s not as simple as it seems—letting the chips fall as they may—but equally, I’m hoping to show that system assembly doesn’t have to be a curse due to the perplexity created by too much choice. As Wharfedale’s Gilbert Briggs said decades ago, “The customer confused buys nothing.” So why court confusion?

Buying hi-fi has always been afflicted by too many options. If we followed the choices for supercars, luxury pens, or even wristwatches, less than ten percent of the brands we must deal with currently in high-end audio would remain. This simple package alone illustrates the embarrassing, head-scratching surfeit of candidates. You don’t believe me? Basic math tells me that if you narrowed the choices down to four of each component type—all-in-one LP-playing front-end / preamp / power amp / speakers—you would face 256 possible combinations. Who can listen to that many?

But that’s why this should be fun rather than a reason to berate me for leaving out your favourite amp or speaker. It’s about individualism, because at any given time in hi-fi’s history, there have been default systems, usually concocted by collaborating manufacturers or asshole reviewers. This sloth and market-fixing created entire countries’ worth of sheep-like consumers.

Despite there never having been a shortage of options at any time in hi-fi’s history, some default systems dominated their markets to an absurd level. In the 1980s, for example, if you lived in the UK and wanted to buy a starter system, you were all but coerced into buying a Dual CS505 turntable, NAD 3020 amp, and any of the £100-per-pair UK-made speakers: KEF Coda, Celestion Ditton 100, Wharfedale Diamond, etc. This package sold in the hundreds of thousands in the UK alone. And that’s literal, not a guesstimate. I even read somewhere that NAD shifted more than a million 3020s. 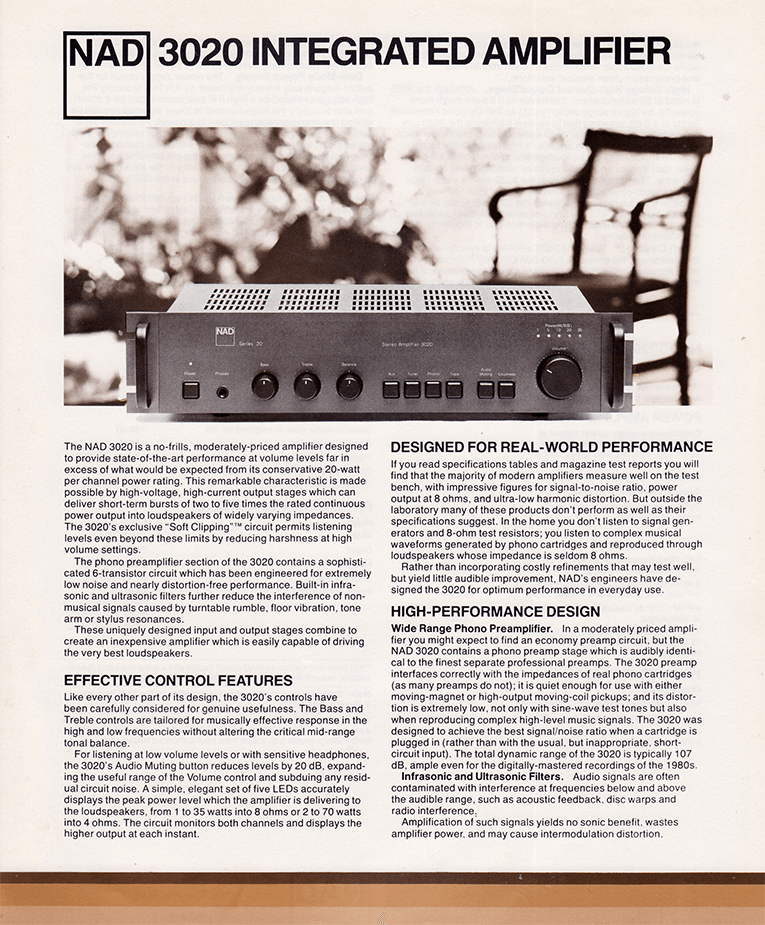 Another example: back in the USA, when I was at university in the early 1970s, it was a Pioneer PL-12, AR, or Dual turntable; Dynaco SCA-35 integrated amp; and Dynaco, Advent, or EPI speakers. As the market grew more sophisticated and competitive, brand alliances formed systems: Krell-plus-Apogee, Linn-plus-Naim, Audio Research-plus-Magnepan. Even if you wanted to break away from that, most retailers would strongarm you into the pairing that they stocked. No surprises there.

Easy options are not what this is all about. My project is about possibilities, about using one’s imagination, about having some fun. So please keep your alternatives to yourselves—I get it, but I am not even remotely interested. Preamble over, because here’s where I piss you off even further with Component No. 2: the preamplifier. And many of you will find my choice bizarre, outré, deliberately contrary, purposefully controversial, or whatever other spin you care to apply to it.

We have already established that I want to use the Bob Carver Crimson 275 for the heart of the setup. This is based mainly on my prejudice: I love tubes. The amplifier has been in use in a system for which it was not intended, driving $50,000 speakers, fed by a $15k preamp and a $90k turntable/arm/cartridge. It has paid its dues by sounding wonderful, behaving like it just graduated from a Swiss finishing school, and it looks like it should cost double its $2750. I love it, but it’s nearly half the budget. Time to get lateral.

Normally, I would opt for a matching preamp—back in the day, it was Dynaco PAS3-plus-Stereo 70, Quad 33/303, Audio Research SP6 and D75, etc.—but there isn’t one yet from Bob Carver. Instead, I tried the Crimson 275 with four wildly differing preamps, and found it to be amicably consistent and forgiving. Compatibility is unlikely to be an issue.

However, because this system is LP only, I figured, why not dispense with a conventional preamp altogether and choose a phono stage with volume control? I had just reviewed and acquired for my reference system the replacement for one of my all-time favourites, the EAR 834P. Enter the EAR Yoshino PhonoBox, available with or without variable output via a front-panel-mounted rotary control. 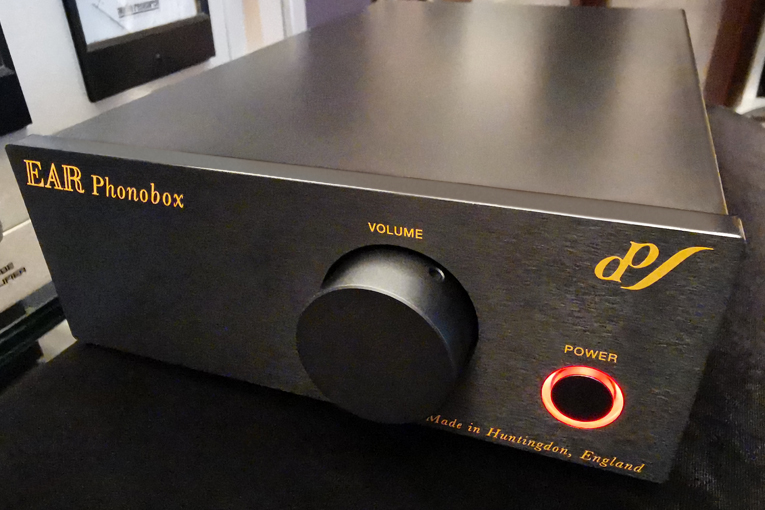 EAR Yoshino went even further, offering it in a variety of forms, which include MM or MC only, MM-plus-MC, with or without volume control as mentioned above, and in basic black or sexy chrome. The only constraint is that it has a fixed load for MC. However, it is priced at a sensible $1795 stateside if you buy the MM/MC version with volume control in black, not chrome. So far, then, that’s $4545 of my target budget.

All-tube, nicely made, the PhonoBox conquers its limitation of fixed values because Tim de Paravicini—this is one of the last of his designs released during his lifetime—chose so well that I have yet to find a cartridge which it doesn’t suit. No, I haven’t fed it any of those exotic Japanese MCs with output so low that it can barely be measured, and I’ve yet to connect it to one of my Deccas. That said, it’s about as “universal” a phono stage as I have heard, and it drives the Crimson 275. 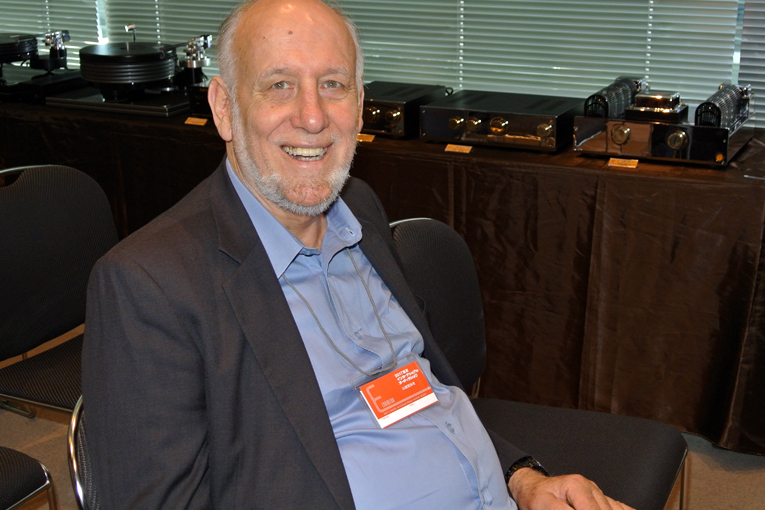 As before, describing its performance in this system will wait until the series concludes, but here’s the practical bit. The PhonoBox is slightly larger than the 834P it replaces, but not as tall: 180mm x 77mm x 310mm (WHD) against the 834P’s 124mm x 95mm x 275mm. Inside are three 13D16 triodes, but you can order it with ECC83s. This already tells you that tweaky types with boxes full of NOS tubes can experiment to their hearts’ delight, e.g., fitting vintage Telefunkens or Brimars or RCAs.

As with the 834P, two transformers provide x10 step-up for MC cartridges. When we tested it for Hi-Fi News & Record Review, editor Paul Miller found it delivered +48.8dB gain for MM and +68.5dB for MC. According to Paul, these are “almost exactly the ‘average’ output of today’s pick-ups.” 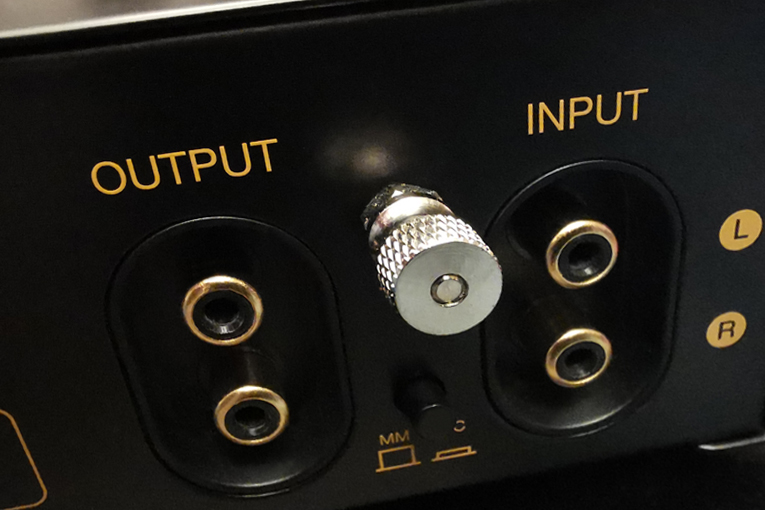 So far, so good for cartridge matching, but what about its role as a single-source, LP-only preamp? When it comes to driving power amplifiers, the PhonoBox can deliver better than 10V. As Paul measures the hell out of everything, you might wish to read his lab report so you know I am not making this up. This really is a killer phono stage, and if I were EAR, I would use it as the basis for a “normal” preamp by adding a couple of line inputs.

Next month: too many turntables!