Our InSight videos, which we post on our own YouTube channel, have been more successful than we ever imagined they would. They were originally conceived, in early 2014, as a series of videos, each five or six minutes long, and each telling a company’s story through one or more of its current products. That concept hasn’t changed, but our production schedule certainly has.

At the beginning, we thought we’d produce four InSight episodes per year. But with the first four InSight episodes under our belt in only six months, the annual total grew to six, and then eight -- now, we seem to be on target to produce one video each month. Then, in July 2015, while shooting InSight episodes at KEF, we came up with the idea for Shorts: two-minute episodes that focus on some interesting aspect of a company -- a product, a technology they’ve developed, or something else that we feel would interest viewers -- and also viewable on our YouTube channel. Our current goal is to produce six Shorts per year, but, as with InSight, I can easily see that number growing. I can also see us adding a third video series, about the world of recordings -- but it’s still a bit too soon for me to say any more about that here.

For now, I’ll focus on our mid-August trip to Denmark to shoot InSight and Shorts videos -- it wound up being our busiest trip yet. At first, we’d planned to visit only Gryphon Audio Designs and Dynaudio, in towns just nine miles apart; on our final day, however, we found we had enough time to visit the granddaddy of Danish audio firms, Bang & Olufsen, aka B&O.

We’ve learned that a good InSight episode needs to convey a clear sense of a company’s personality -- not only how they do what they do, but why: what makes it tick and helps determine its success. Seeing three companies of widely varying sizes operating in completely different ways to make very different products was quite an education -- and perfect material for our videos. 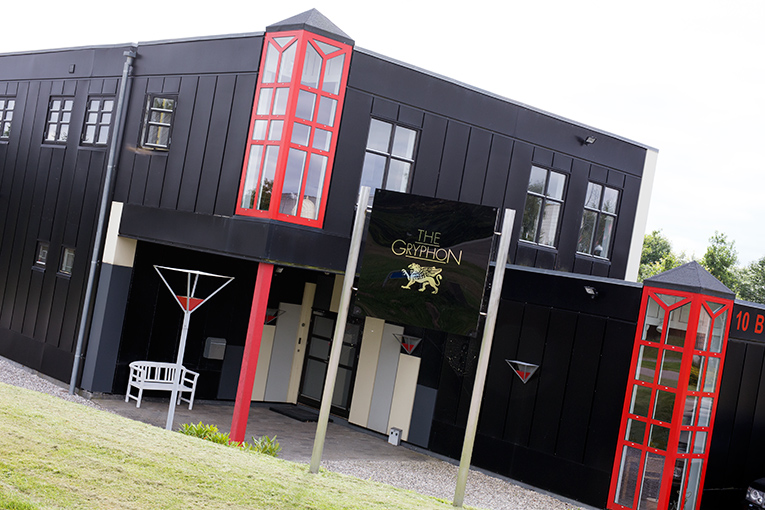 Our first stop was Gryphon Audio Designs, in the little town of Ry, which has a population of just under 600. Gryphon’s two-story factory is fairly new, looks stylish inside and out, and is just the right size for how they do business. With a staff of only about 15, Gryphon was the smallest company we visited, and makes the most expensive products. For example, their massive new Kodo speaker system costs €250,000/pair. The Mephisto Solo mono power amp, also huge, retails for €84,000/pair. That this small company produces products this large and of this caliber is a result of the vision of the company’s founder, Flemming E. Rasmussen, one of the most respected men in Danish audio. As Flemming matter-of-factly told me, from the outset, in 1985, his company has made the kinds of products that he would want to buy, without setting any limitations on manufacturing costs. The products that Gryphon makes are, simply, the manifestations of his dream.

Surprisingly, it’s Gryphon’s small size that helps Flemming realize his product dreams. By keeping his staff small and his overhead low, he’s free to hire the best people he can for the job. That flexibility is also how Gryphon can create electronics, loudspeakers, cables, and accessories, all of which require different skill sets in those who design and make them. 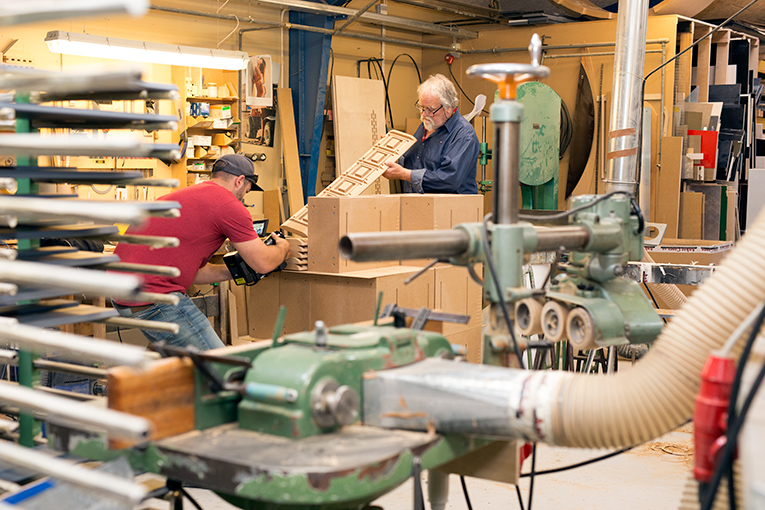 Only the final assembly of certain Gryphon products -- mostly, the speakers -- is done on-site. Product servicing is also done at the factory, as is warehousing. For the rest, Gryphon takes advantage of the fact that Denmark has many companies with state-of-the-art manufacturing facilities that are able to produce most of their products in full. Gryphon has worked with most of these outside companies for a long time, and they’re well versed in what Gryphon produces and the level of quality the company demands; however, should vendors come along that can do an even better job, Gryphon’s flexibility allows them to explore such options. Rasmussen’s strategy of staying small has allowed Gryphon to become a big operator in the state-of-the-art hi-fi scene.

Since its founding, in 1977, Dynaudio has occupied the same plot of land in Skanderborg (pop. 18,000), where they make speakers the more traditional way, by manufacturing nearly every part in-house: cabinets, crossovers, drivers, you name it. What’s more, Dynaudio has built up their manufacturing prowess to the point that they now offer a range of home speakers with prices beginning at $799/pair -- for the Emit M10, a two-way bookshelf model -- and ending at $115,000/pair, for the Evidence Master, a three-way floorstander. Dynaudio also makes speakers for the automotive and professional markets, all in Skanderborg. 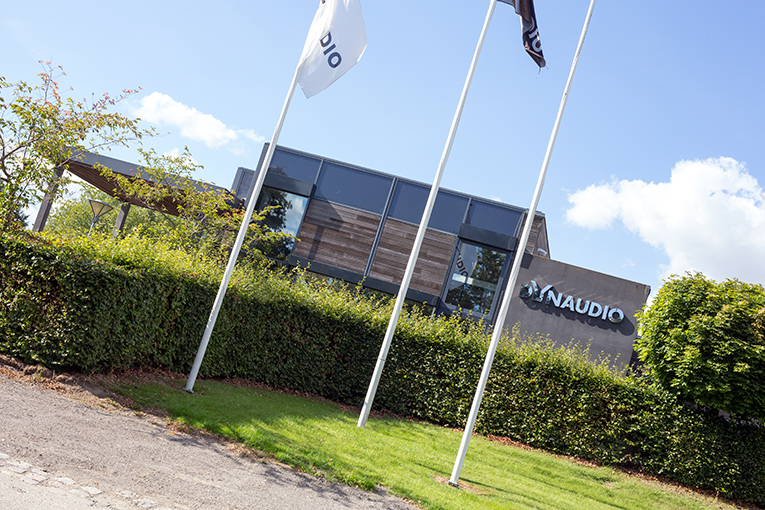 To design and manufacture on this scale, Dynaudio has a staff of some 300 scattered among several buildings, and is now constructing, beside their main building, an ultramodern R&D center. This new home of their design team will be the epicenter of their acoustic testing, and will house one of the largest anechoic chambers in Europe. 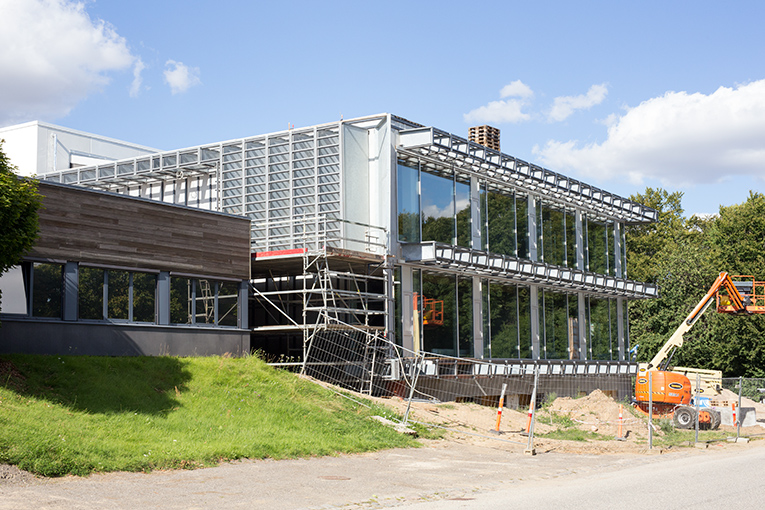 I was impressed with Dynaudio’s design and manufacturing facilities -- they’re some of the best I’ve seen in high-end audio. The number of people working there also surprised me. Before our visit, I figured they employed 100, maybe 150 tops -- seeing twice that number was eye-opening. However, what impressed me even more was the level of quality Dynaudio strives for, particularly in their drivers, which they understandably see as the heart and soul of any successful loudspeaker. According to senior manager Roland Hoffman, our host for our two-day visit, every aspect of a Dynaudio speaker design is carefully scrutinized -- but if any problem revealed by this scrutiny can be traced back to a driver, it’s never “corrected for” by changes in the crossover or elsewhere. Instead, Dynaudio redesigns the driver itself -- one of the many benefits of making your own drivers. Dynaudio’s philosophy is to get it right at the beginning. Sounds wise to me.

We hadn’t planned to visit Bang & Olufsen, but I’m glad we did; in fact, doing so taught me that a hi-fi trip to Denmark can’t be considered complete without a visit to B&O. They’re based in Struer (pop. 10,000), a little over 60 miles from Skanderborg. 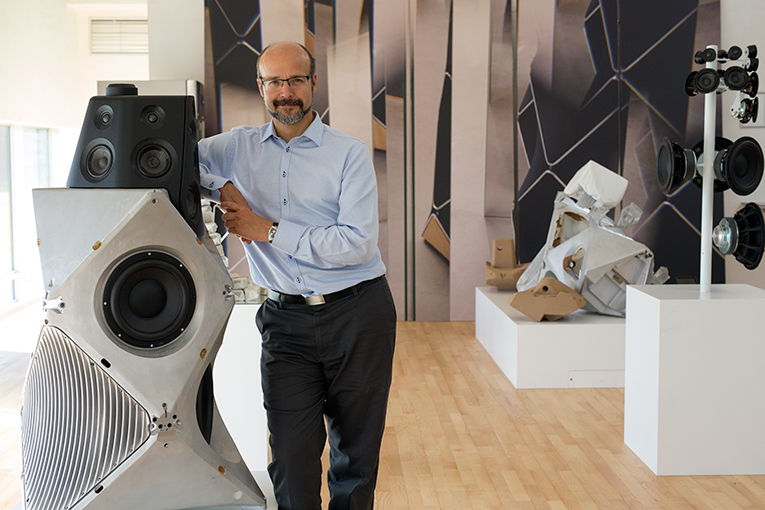 Geoff Martin with the BeoLab 90

To help make the last-minute visit happen, I called on Geoff Martin, whom I’d met at the 2016 Consumer Electronics Show. A fellow Canadian, Martin graduated from McGill University with a PhD in Sound Recording. He was kind enough not only to put us in touch with those who could arrange for us to visit B&O, but took the time to sit down and talk with us about the company’s BeoLab 90 loudspeaker, an $85,000/pair, 18-driver technological tour de force created to celebrate B&O’s 90th anniversary, in 2015. Jette Nygaard, B&O’s director of public relations, gave us a tour of their facilities, including the aluminum-fabrication factory, where some of the BeoLab 90’s parts are made.

With computers and smartphones now representing the lion’s share of the consumer-electronics market, B&O, like so many other electronics brands, has hit some rough patches. They restructured in 2008, and laid off 300 workers. They also moved more of their manufacturing out of Denmark, to places such as the Czech Republic, where they have a factory. However, even a downsized B&O is still a major force, with about 800 employees in Denmark and some 2000 worldwide. The buildings of their Struer HQ occupy a multi-acre campus. In high-end audio terms, B&O is big.

Still, what I most admired about B&O was the sense of place and local history. In Struer, sheep still roam the grounds, harking back to the company’s early days, when most of the present campus was still a farm. In a beautiful building that houses the management team is a presentation area for the BeoLab 90, an elaborate media room to demonstrate their products, a wicked-cool museum of B&O’s very first products -- and even a concept store, where their designers can play with new ways to design the stores and showrooms in which, all over the world, B&O showcases their products. Over many decades now, B&O has proven that they can create visually beautiful audio and video products. From concept to creation to getting what they make into customers’ hands in their own unique way, B&O has it all. 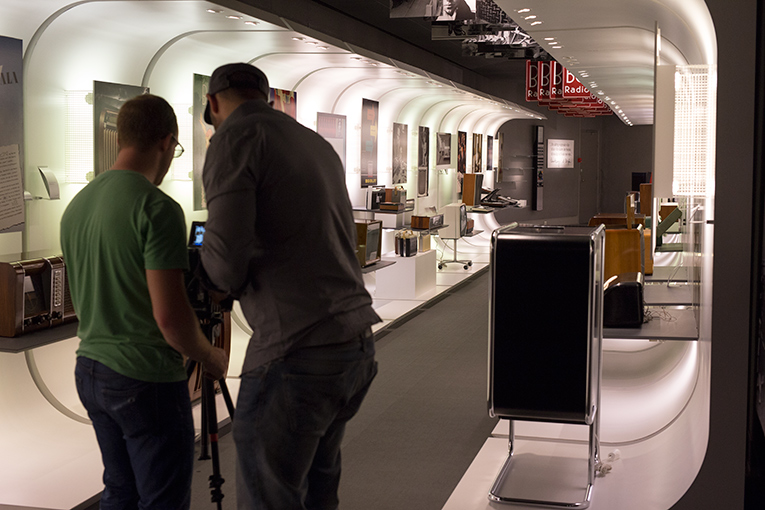 At the end of our tour, Nygaard suggested that we stop at the Bang & Olufsen store in Herning, a town on the route back to our hotel. According to her, it’s the most beautiful B&O store in the world. With a recommendation like that, how could we resist? 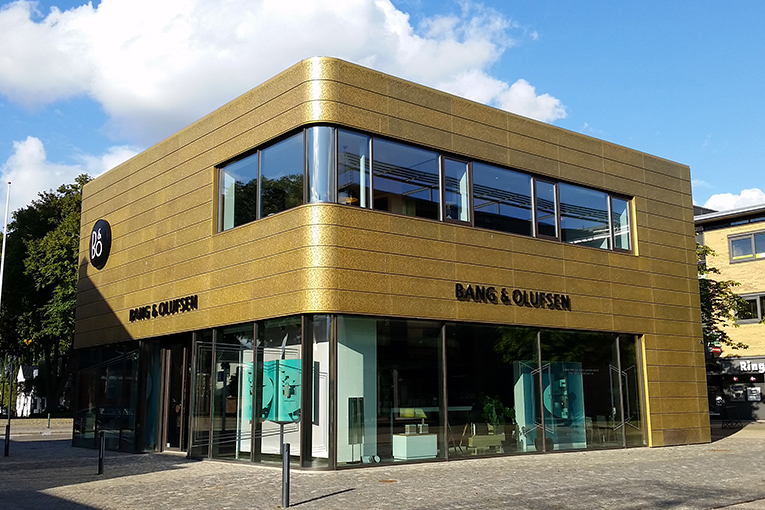 Shaped like a Beolit 15 portable speaker and prominently sited at the most visible part of Herning’s town square, is B&O’s Nexus store. This dazzling-looking showcase, which opened in 2014, features only audio and video products made by B&O -- but it’s not owned by the company. It’s the property of Kenneth Lauritzen, the mastermind behind B&O’s concept store, and who produced a hardcover book about its creation. Inside and out, Nexus breathes luxury, which is right in line with the image that B&O has long promoted. I’m glad we visited, if only to see how well high-end audio and video can be showcased. If you’re ever in the neighborhood, don’t miss it. 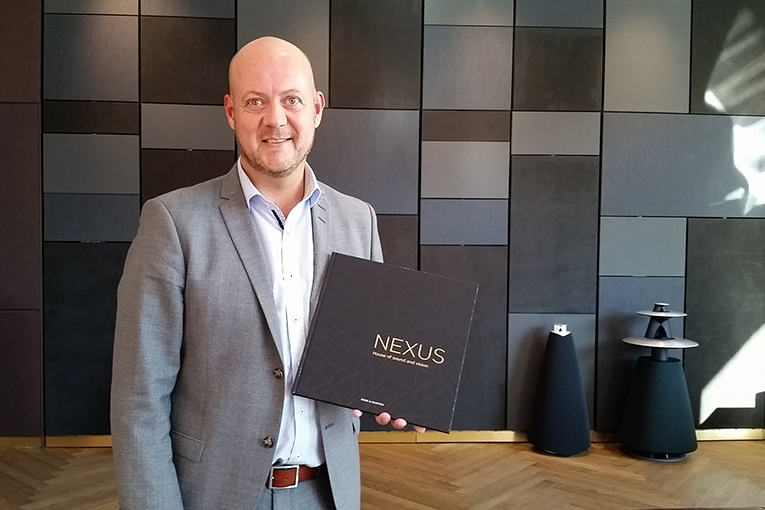 Suffice it to say that our whirlwind trip to Denmark was our busiest InSight shoot yet -- three companies in five days, shooting video all along the way, ain’t easy, but I wouldn’t have had it any other way. That jam-packed trip provided an education of a lifetime, giving us insights into three unique Danish companies that we could have gotten no other way -- and those insights are precisely what we’ll deliver in our series of InSight and Shorts videos. Watch for them this fall on YouTube.