Our 2016 Products of the Year -- One-Sentence Summaries

It’s time to name our Products of the Year for 2016, and below is the list of winners. In Las Vegas in early January, at the 2017 Consumer Electronics Show, we’ll present a trophy to a representative of each company whose product was chosen. Photos of those presentations will then be posted on SoundStage! Global, which will also feature our coverage of CES 2017. But before you read the winners, it’s important that you know what the awards themselves mean, and how we arrived at our final decisions.

In 2017, as in the preceding 15 years, each Product of the Year award falls into one of three sections. First are the “Individual Awards”: one component in each of four categories. “Hall of Fame” recognizes a product of topflight sonic quality that has been on the market for a long time, either in its current form or as part of a continuing series of improved models -- by a long time, we mean ten years or more. “Aesthetics and Sound” honors a product with superb sound quality and equally superb styling. The winner of “Innovative in Design” doesn’t necessarily break the mold for a product of its type, but does exhibit a novel design twist or two that significantly separates it from the pack. And “Pioneering Design Achievement” gives a shout out to a product that is groundbreaking in terms of performance and/or functionality -- a landmark device that’s likely to be imitated by others in years to come.

Next are the awards for “Outstanding Performance,” for products that exhibit exceptional sound quality on an absolute scale, regardless of price -- more often than not, the winning models are expensive. And “Exceptional Value” acknowledges products that display outstanding sound quality for their price. Both this and the “Outstanding Performance” categories include multiple subcategories, one per product type: e.g., one integrated amplifier, one power amplifier, one phono stage, etc. In a given year, it’s possible that no product of a certain type is named; this simply means that in that year we reviewed nothing of that type that we felt deserved to be called a Product of the Year.

This year’s award winners were chosen from among the products reviewed in 2016 for one of our editorial sites -- SoundStage! Hi-Fi, SoundStage! Ultra, SoundStage! Access, or SoundStage! Xperience -- and which received a Reviewers’ Choice award when the review was published. Our editorial team reads each review on this short list and, based solely on that review, decides whether or not it’s worthy of being named a Product of the Year. This is the most important part to understand about our selection process: the review itself must provide all the evidence required to justify the award. If a writer believes that a model he reviewed should be named Product of the Year but his review of it doesn’t convey that degree of appreciation and enthusiasm about the model, it doesn’t win. 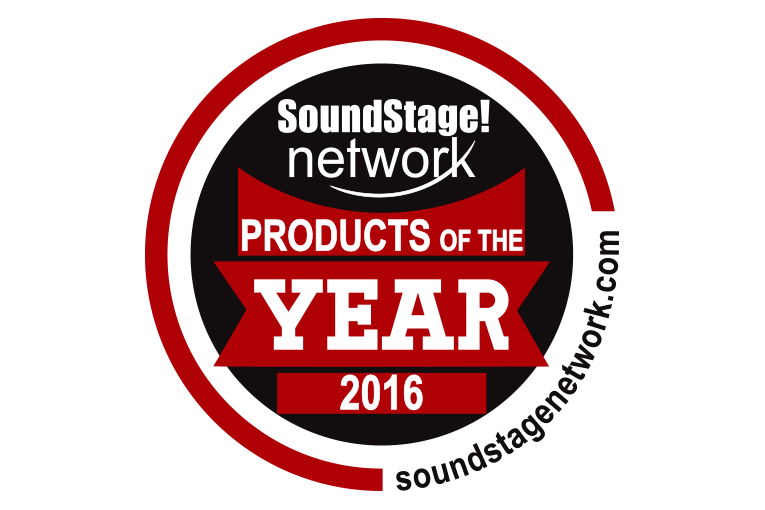 Because the review itself must make the case, I thought that this year I’d announce each award by including one sentence from the original review that I believe at least hints at why it was chosen as a Product of the Year for 2016; for those who want to read more, a link to each review is provided in the product name. And here are the winners:

Aesthetics and Sound -- KEF Blade Two loudspeakers, by Doug Schneider (SoundStage! Hi-Fi, April 2016): “Add to those qualities strict neutrality across the audioband, extremely extended highs, and clarity that made me stand up and notice, and the Blade Two is a top-drawer transducer as exciting to listen to as it is to look at.”

Pioneering Design Achievement -- Devialet Silver Phantom loudspeakers, by Hans Wetzel (SoundStage! Access, February 2016): “For around $5000, a pair of Silver Phantoms offers more to consumers than any other complete sound system I can think of.”

Devialet Expert 1000 Pro mono DAC-integrated amplifiers, by Jeff Fritz (SoundStage! Ultra, November 2016): “The Expert 1000 Pro can compete with anything at any price, and it does so with style and without overwhelming a listening room with tons of gear.”

Zanden Audio Systems Model 3100 preamplifier, by Garrett Hongo (SoundStage! Ultra, May 2016): “Attractive, compact, and a sonic wonder, the Zanden 3100 preamp is one of the finest contributions to high-end sound I’ve ever heard.”

PS Audio PerfectWave DirectStream Junior digital-to-analog converter, by Philip Beaudette (SoundStage! Hi-Fi, October 2016): “[W]hat makes the DSJ special isn’t merely technological, but that that technology is used in the service of outstanding sound quality to make it among the best-sounding DACs I’ve heard.”

Simaudio Moon Neo 330A stereo/mono amplifier, by Erich Wetzel (SoundStage! Hi-Fi, July 2016): “Its combination of high-quality electronic parts, high precision of construction, manufacturer reputation, ten-year warranty, sexy looks -- and, most important, its beautiful reproduction of every recording I played through it, regardless of musical genre, pace, or playback volume -- easily exceeded all of my needs.”

PSB SubSeries 450 subwoofer, by Kevin East (SoundStage! Access, September 2016): “PSB has not only cut the edge but stropped it razor sharp; [the SubSeries 450] is a bold statement, and a challenge to all other makers of subwoofers.”

On behalf of our entire reviewing staff, I congratulate all of the 2016 award winners. And now that our 2016 reviews are part of hi-fi history, we turn our attention to reviewing components that could be the Products of the Year for 2017. Throughout the coming year, you can read our reviews and guess which ones might make it -- but you won’t know until January 1, 2018.