I’ve been discussing high-performance loudspeakers for the last couple of months, and will return to that topic in August with my grand finale on the subject, “High-Performance Loudspeakers: The Contenders.” But July seemed the right time to revisit computer audio, an important subject I’ve touched on regularly over the past few years, to offer some updates that I think many of you will find relevant. 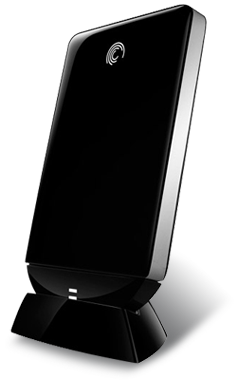 In past articles I’ve written about the importance of backing up your music files and described my bad luck with external Seagate drives. Every one I’d purchased up till then had been useless -- most crashed within weeks or months of purchase. This is why I’ve consistently recommended Western Digital drives, which I’ve found far more reliable.

That stance is shifting, due to some recent experiences I’ve had with Seagate’s GoFlex Pro portable drives. These are a bit more expensive than the FreeAgent Go portable drives I’d purchased before, and which so quickly failed (classify under: Junk); they’re also quieter, faster, and built far better. Most important, they’re more reliable -- so far.

What got me to try the GoFlex Pros is a nifty connection option that allows you to switch them from a standard USB 2.0 drive to one that can work with FireWire 800, eSATA, and USB 3.0 connections, all of which are quite a bit faster than USB 2.0 (FireWire 800 is about twice the speed, and eSATA and USB 3.0 are each many times faster). I haven’t found a comparable Western Digital portable drive with this feature. And if my two GoFlex Pros remain reliable over the long term, it will be a bit of a comeback for Seagate in my books.

I believe that the writers who told everyone to run out and buy an Apple Mac for the best computer playback jumped the gun a bit. I won’t deny that a Mac is a great way to go for ease of setup, but it’s hardly the only way. A Windows-based laptop or tower can easily be set up for high-quality, low-jitter, bit-perfect playback in no time at all -- and it costs almost nothing. And there are other options.

Many audiophiles today are looking to such devices as the Auraliti PK100 and Bryston BDP-1, which are creating a new product category that, for the time being, I’m calling digital players. Basically, a digital player is a purpose-built computer in a modest-size chassis with a small motherboard and soundcard optimized to receive a digital music file from an attached USB device (hard drive, thumb drive, etc.), and output it in low-jitter, bit-perfect fashion to an attached digital-to-analog converter. (The Auraliti PK100 includes a built-in DAC, but I think most audiophiles will opt for their own.) I wouldn’t go as far as to call these models music servers, because they lack too many features. (The Bryston BDP-1 has a small display, the PK100 none at all.) Nor do these devices have keyboards; instead, you control with them through a Web browser.

The Auraliti PK100 costs $799 USD, the Bryston BDP-1 about two grand. When these products were first released, I more or less dismissed them because they cost far more than a fairly decent laptop -- and, at first glance, offer far less. I was wrong about that. In fact, it now seems that these companies might be ahead of the curve in some ways.

If you read Jeff Fritz’s interview with Matan Arazi about music servers on Ultra Audio, you know that Arazi went berserk and overbuilt the most stripped-down digital player he could. His and that model’s sole purpose was to get the digital music data from a storage device to a DAC as perfectly as possible. I think his project is interesting and worth reading about, but it’s more about creating a state-of-the-art computer dedicated to a single task than making something commercially viable.

But Arazi’s idea of a stripped-down, highly optimized computer dedicated to audio playback might be a good one, if only because Mac and Windows-based computers are jacks of all trades designed to do everything from word processing to downloading the latest TMZ.com video clip, all while the user is Facebook-chatting with a “friend” located who knows where. Providing a bit-perfect, low-jitter, low-noise environment for an audiophile DAC to work with isn’t such devices’ highest priority. In fact, not that many years ago, no one would have even considered using a laptop as a high-end digital source.

This is where the Auraliti and Bryston models come in. At first they seem overpriced for what they do -- or, more to the point, what they don’t do. But what little they do do they seem to do extremely well. Their limited functionality is actually their strong suit, and therefore their prime selling feature to audiophiles like us, who worry over the tiniest things -- e.g., if the bits from the hard drive or USB stick end up at the DAC in the most pristine condition possible. Who knows? This wave of new digital players might do so well they could have all those people who thought that Macs were the holy grail selling their beloved MacBooks and buying one of these instead. Now that would be something. I suspect we’ll be seeing more and more digital players in the future. 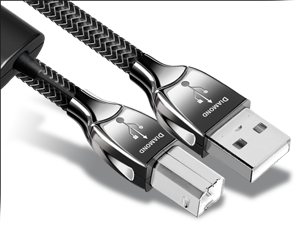 And now for something really controversial: USB cables make a difference. To some, that sounds like heresy. In fact, a few months ago, I would have been on their side of the fence. But when AudioQuest’s Shane Buettner met with me at Salon Son & Image in Montreal, he handed me one of AQ’s Diamond USB cables and said, “Try it.”

When I compared the Diamond with my own generic USB cable, it wasn’t long before I realized that with the Diamond in my system, the sound was slightly cleaner, more spacious, and airier on top than with the no-name USB cable I had lying around. Our own Vade Forrester tried AudioQuest’s Coffee USB cable and heard similar things -- this time, though, he put it up against a WireWorld USB cable he’d been using.

Now, granted, the first thing that those who are savvy about USB cables will do is point out that the Diamond costs about $700 and the Coffee $350 for a length of 1.5m -- astronomical amounts for a USB cable. But price aside, I was shocked that they made any difference at all. Why should they? Isn’t a regular ol’ USB cable good enough? Is it really so hard to transfer music data over a wire that you need something costing hundreds of dollars to do it right? Maybe there’s more to the transfer of digital data than many think.

But here’s the thing: No one seems to know why these things improve the sound.

I’ve heard theories, and listened to designers speak about what their cables do, but no one has come up with a clear, concise explanation, backed by some sort of measurement data, of why a USB cable can make a difference, or why one might be better than another. I know that it has nothing to do with being “bit perfect” -- i.e., getting the ones and zeros from point A (the computer) to point B (the DAC) without error. Computers work as well as they do because they’re good at transferring data error-free. Every time you open and close a Word document, it’s error-free. Massive downloads can be done from the Internet error-free. Banking transactions can be done online because computers do it error-free. In short, it’s not hard at all to get the bits right. There’s something else -- timing, maybe -- but that’s just a guess. Whatever that something else is still confounds me and others.

There are no easy answers, but the USB controversy is something I now take seriously. We’ll be exploring it more on the SoundStage! Network in the months and years to come; in the process, I hope we find some answers.

Next month I’ll conclude my discussion of high-performance loudspeakers, and the month after that I wouldn’t be surprised to find myself writing again about computer audio. It’s now the most dynamic and fastest-growing area of high-end audio, and not a month goes by in which there’s not something new or interesting to learn and tell you about. By then I’ll also have had more time with my new Seagate drives, someone else will probably have released a new digital player, and our team will have had more experience with these ultra-confusing USB cables.