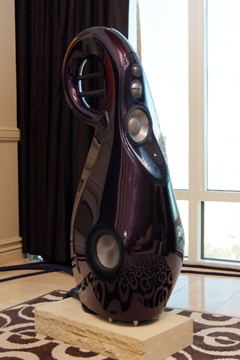 If you’ve read our SoundStage! Global coverage of the 2012 Consumer Electronics Show, then you’ve probably realized that we felt that the two best-sounding rooms at CES were those of Magico and distributor On a Higher Note. Magico featured their new Q7 loudspeaker, which retails for a mind-boggling $165,000 USD per pair, and On a Higher Note showcased Vivid Audio’s Giya G3 loudspeaker ($40,000/pair). The Magico Q7s were driven by some custom-made amps that Magico didn’t say much about, no doubt to keep the focus on their speakers. The Vivid Giya G3s were powered by an amp from Luxman, which OaHN also distributes. These systems’ front-ends included other components, but because the basic sound of any audio system is characterized mostly by its speakers, that’s what we concentrated on.

It was a toss-up as to which room sounded better -- their sounds differed greatly. Because of this, I can accept arguments either way about which came out on top, particularly if someone favored the Q7 because it went deeper in the bass -- it did. Otherwise, the overall sound qualities were on a par. I preferred the Vivid room, for two reasons. First, the Giya G3 sounded unbelievably lively yet natural, projecting sound from its unique enclosure in a transparent, viscerally thrilling way unlike that of any speaker I’ve heard other than Vivid’s own Giya G2 (see below). Second, the Giya G3 costs less than one-fourth the Q7’s price, which makes Vivid’s achievement all the more significant -- and even more so when you compare the Giya G3 to other high-priced speakers shown at CES 2012, many of which cost in excess of $100,000/pair. All told, that’s quite a victory for Vivid.

That said, such positive comments about Vivid Audio’s showing at CES 2012 is quite a contrast to how we treated the company in its early days. I now realize that, back then, we were dead wrong. Vivid released their first speaker, the B1, in 2004, and not long after that they displayed a complete line of speakers at the High End show in Munich, which we attended. But instead of closely looking at and listening to what they offered, we gave Vivid’s line a cursory glance and walked on. Why? The speakers looked too odd and “simple” to be any good, so we dismissed them. Plus, at the time I didn’t know who Vivid’s designer, Laurence Dickie, was, or of his previous work with B&W. Was such ignorance bliss? Hardly.

It wasn’t until spring 2009, at the Salon Son & Image show in Montreal, that I took a close look at the Vivid B1 and found that its “simple” appearance was deceptive -- behind its clean-looking exterior was some very advanced technology, as well as innovative features that a cursory glance could easily overlook. It was at SSI that I also first listened to the B1. I found its sound so superb that I requested a pair for review, which Vivid sent right away. My review of the Vivid B1 was published in December 2009, and as soon as that was done, I asked the company to send me a pair of their new Giya G2s, which they did -- you can read my very positive review of that amazing speaker this month. A pair of them might cost $50,000, but I find it easy to justify that price -- right now, the Giya G2 might be the best speaker in the world. 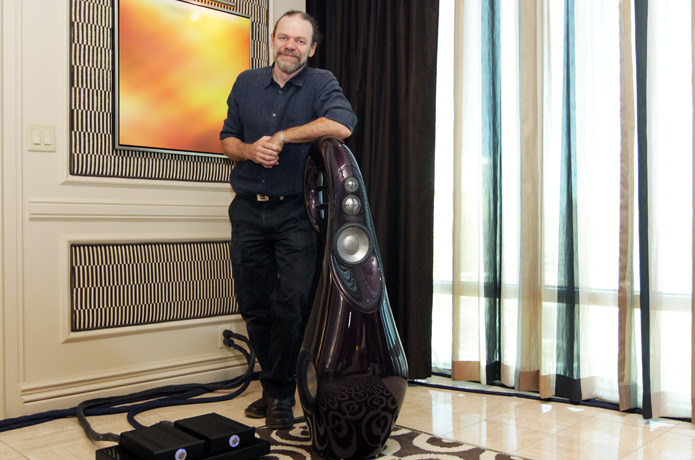 Laurence Dickie with the Giya G3

Telling you how we ignored and then at last discovered Vivid, and stating that the Giya G2 is the best speaker I’ve ever heard and that the G3 was the best thing at CES 2012, is all a little embarrassing -- after all, I’m the “speaker guy” around here, but I completely whiffed on Vivid and its products way back when. I can easily imagine those who did discover Vivid at the start saying, “What a dunce.” They’re probably right.

What’s done is done. Now I can only I hope that my reviews of Vivid Audio’s B1 and Giya G2 loudspeakers help set the record straight. Can two rights outweigh a wrong? I hope so. If not, there’s this year’s CES report, our recognition this month of the Giya G2 as a Recommended Reference Component, the article you’re reading right now, and this closing comment: Vivid Audio is now making some of the world’s best-sounding loudspeakers, and no one who’s serious about state-of-the-art sound should ignore them. I speak from experience when I say that, when shopping for hi-fi components to reproduce the sound of recordings in the best way possible, ignorance is definitely not bliss.