Last month, when I wrote about my six favorite cutting-edge loudspeakers for 2012 (so far), I put Vivid Audio’s Giya G2 at the top of the heap. The G2 sounds better than any other speaker I’ve heard, and looks different from anything I’ve seen -- save for its siblings, the Giyas G1 and G3.

Most of the Giyas’ uniqueness has to do with their distinctively curved curly-topped cabinets. To some these cases might look solely ornamental, but their form follows their function -- that curled top is the terminus of a long, tapered tube that takes up the rest of the cabinet, and works to absorb the backwave energy generated by the speaker’s two side-mounted woofers. The Giyas’ smooth, rounded surfaces might also look like they’re for show, but they’ve been designed that way to provide an ideal wavelaunch platform for the drivers. In short, those crazy-looking cabinets have been very well thought out. They’ve helped put Vivid Audio ahead of the pack in terms of sound, and might even inspire other speaker designers at other companies to redouble their efforts.

Although Vivid’s Giya-series cabinets have been described and discussed in reviews, including my own, no writer can fully explain or understand them, or how they came to be, as can their creator. Laurence Dickie, who lives in Britain, cut his speaker-design teeth with B&W from the 1980s through the mid-’90s, work that included the development of the B&W Nautilus -- which is also where and when he began to work with tapered tubes and curvilinear cabinets. Dickie has been Vivid Audio’s chief designer since the company’s inception, some ten years ago. Here’s what he had to say about the Giyas:

Doug Schneider: What percentage of the Giya cabinets’ shape has strictly to do with form and how much with function? Are they about sound or style?

Laurence Dickie: With our first designs, the Oval series, I’d put it at around 50/50, but with Giya it’s probably nearer 75% to do with function. I wouldn’t want to compromise the performance just because something didn’t look right, but on the other hand, if I feel I can add a pleasing (to my taste) aspect to the form, which has no effect on the acoustic function, then I won’t hesitate to do so -- the spiral ridge on the Giyas that runs from around the bass driver until it blends into the curl at the top being an example. 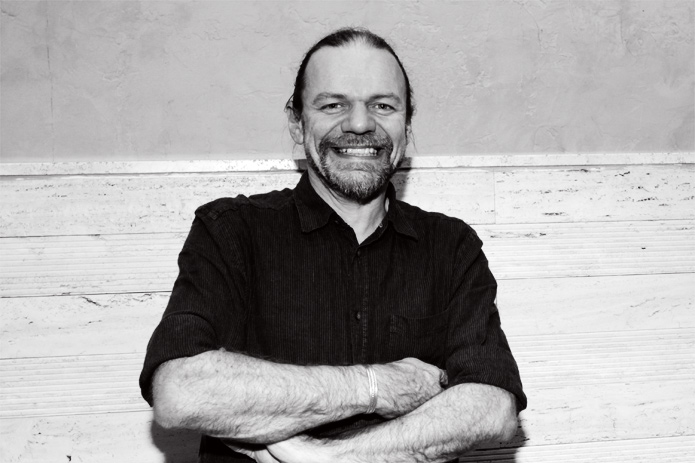 However, I am guilty of allowing form to take precedence over some practical aspects of function, so I’ll take this opportunity to apologize to anyone who has found the location of our terminals a right royal pain. But I’m afraid I personally hate the sight of terminals and connectors, so they’re tucked away on the Giyas. Hopefully, most end-users will make the connections once and then be able to forget about them.

DS: When designing the Giyas, were you ever concerned with the public’s perception of them?

LD: Actually, not at first -- no parent ever sees their offspring as anything other than perfect! My education was swift and merciless when we started to show the B1 at exhibitions. Women, in particular, were completely polarized in their opinions, ranging from "My god, they’re fucking ugly," to one who ran her fingers slowly over the cabinet while purring "They’re so gorgeous" -- both equally unforgettable.

Since then, we’ve come to terms with the fact that radical design appeals immediately to some and not to others. We have unquestionably lost sales due to the appearance, but what has come as a pleasant surprise is how those who have not been happy with the looks but totally won over by the sound have then gone on to "acquire the taste" and have become some of the most devout fans of our aesthetics. I should point out that we have also had sales based solely on the looks.

Giya G1 was unquestionably one of the more challenging designs on the market, but it was also the sheer scale that frightened folks when we first launched it. But it’s nearly five years since then, and people have got used to the quirky top and fat bottom, so when we launched G3, the reaction was universally positive. Everyone loves the baby of the family!

DS: What are the cabinets made of, and why?

LD: Our goal in the choice of enclosure material is to keep the structural modes as high in frequency as possible, so they are safely above the frequency range of the drivers they contain. The best way of keeping the frequency of the bending modes in panels high is to put all the stiffness elements in the skin and to keep the core and resin matrix as light as possible. To this end we use a vacuum-infused composite sandwich with unidirectional [UD] fiberglass skins and a balsa core. The vacuum-infusion process, together with the UD fiber in the skins, keeps the resin content, and hence excess mass, down to a minimum, while the balsa core gives us a good combination of low density, stiffness orthogonal [i.e., at a right angle] to the skins, and damping.

Not only does this combination give the right structural performance, but it also keeps the overall mass low, with each G2 enclosure shell weighing just 22kg, which makes life a little easier for everyone who has to handle them. We can get away with such a low mass because of the use of twin opposing bass drivers to cancel the reaction forces, while conventional front-mounted drivers really do need mass to stop them from jumping about. Some have asked why we don’t go further and use carbon skins with honeycomb aluminum cores. Well, of course we could, but the truth is that the cost would rise appreciably, and the reduction in the overall mass would be very marginal, since it is already dominated by the mass of the bass drivers and crossovers.

LD: Diffraction occurs when a wave encounters an object, but in the particular case of a speaker mounted on a baffle, the diffraction effects are caused by the edge of the baffle. As the sound leaves the driver, it forms a hemispherical wavefront bounded by the baffle on one side. When that wave reaches the edge, it experiences a sudden change in the acoustic impedance. The result of that abrupt change is that some of the sound is re-radiated (it’s a sort of inverse echo) from the edge towards the listener, where it will interfere with the sound which arrived from the speaker directly, and, depending on the baffle width and [the] position of the listener, will cause peaks and dips in the response.

There are factors which will make the problem more or less severe, so having the driver in the center of a square baffle is bad, and in the center of a circular one still worse. On the other hand, it’s possible to get improvements by cutting curved slots in the baffle so the result looks like a flower.

But by far the best way of dealing with the problem is to get rid of the edge completely by either mounting the speaker flush in the wall -- and this is the approach used by many professional monitors -- or by mounting the drivers on the surface of a sphere. This last option works only with a small full-range source; for real multi-way speakers, the next best thing is the side of a cylinder.

DS: How does diffraction manifest itself in the listening experience?

LD: Because of the dependency of the frequency of the peaks and dips on the position of the listener, you can hear these changes as you move around, which can contribute to image instability. But very often the worst dip is bang on axis, since so many tweeters are centrally placed; so if the system is EQ’d to be flat on axis, there may well be a small bump off axis. Usually it’s better not to try to EQ the problem, but [to] just listen [from] a few degrees off axis. 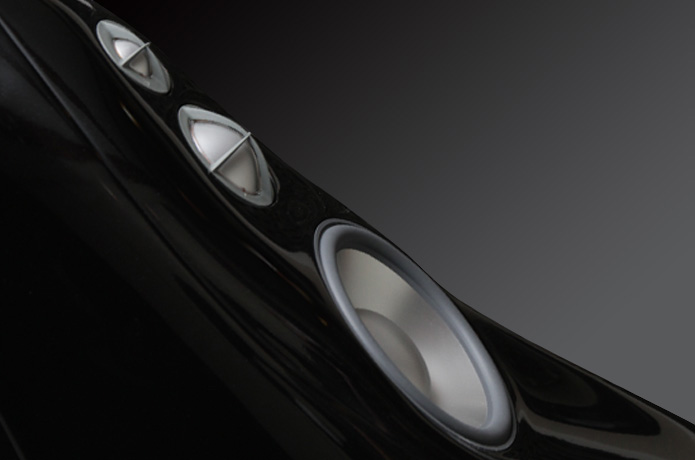 DS: How important are the size and shape of the front baffle in minimizing diffraction effects?

LD: Actually, [they’re] not too critical; just try to start curving the surface away from the driver plane as soon as possible, and the interference due to diffraction goes away.

DS: How successful have you been with the Giyas in terms of minimizing or eliminating diffraction?

LD: I think it’s fair to say that we cannot measure any diffraction effects from the enclosure in any of the Giya models.

DS: What other areas of performance do the three models’ cabinet shapes address and improve on?

LD: The most obvious feature is the curly top, which houses the bass-chamber exponential absorber. We probably didn’t have to put it on the outside, and in fact, the patent we have covers the re-entrant option -- but sometimes you just have to show off! Future models may well be more discreet.

Of course, the functional importance of shape continues on the inside with the other three exponential absorbers, although we have allowed the two smaller ones to see the light of day in G3, but this was principally a practical issue to allow the tweeter height to be correct. 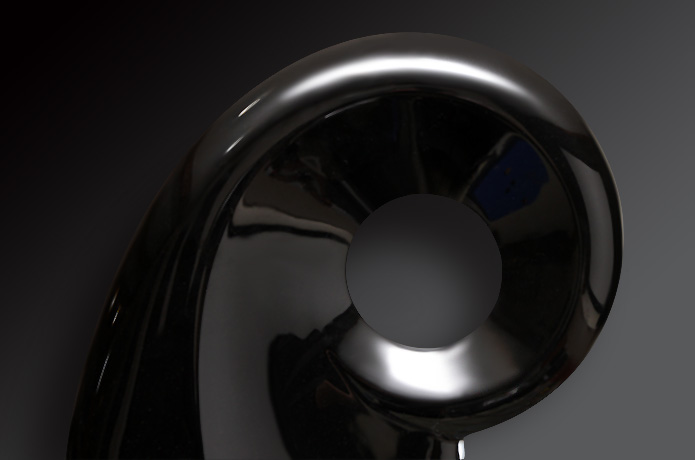 DS: Will future Vivid models follow the Giyas’ lead, or do you have other cabinet shapes in mind?

LD: Tricky . . . I really need to do a bunch of experiments to follow a few hunches, and the results of those may well set a new course for our enclosure shapes. But you can be pretty sure they’ll be curvy in all the important places.