The 2013 SoundStage! Network Product of the Year Awards 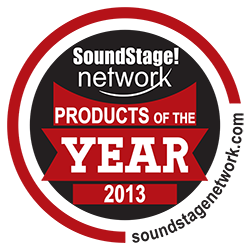 Recipients of the SoundStage! Network’s Product of the Year Awards for 2013 are chosen from all products reviewed this past year on any of our review websites: SoundStage! Hi-Fi, SoundStage! Xperience, SoundStage! Ultra, and SoundStage! Access. Most of them fall into one of the two main categories: Outstanding Performance and Exceptional Value -- that is, cost-no-object and cost-sensitive products. Within each of these main groups are subcategories. These subcategories aren’t necessarily the same each year. Which subcategories we award prizes in for a given year depends on the quantity and/or quality of the products of that category that have been reviewed -- we want to highlight products that are truly the best, without ever finding ourselves in the position of honoring an unworthy component simply because it’s the only product of its type that we reviewed that year. And we give two additional awards: for Pioneering Design Achievement and for Aesthetics and Sound, explained in full below.

Here are the winners of the 2013 SoundStage! Network Product of the Year awards, each with a link to the original review and some brief thoughts from me. All prices cited are in $US.

Anthem took more than five years to design and perfect the M1. The result of their efforts is a class-D amplifier capable of extraordinarily high power, claimed to deliver more than 1000W into 8 ohms or 2000W into 4 ohms, and to maintain a flat frequency response regardless of load -- something that’s not always the case with class-D amps. (With many class-D designs, the high-frequency response in particular varies with the speaker load.) The M1 is also said to be stable into any impedance, and to be unclippable -- if it approaches clipping, it simply shuts down. Befitting the M1’s unique technical design is an appearance just as distinctive -- wide and deep (it’s about 19” square), but shallow (just over 2” high), it comes finished in basic black, which makes it sort of Stealth-like.

Sonus Faber Venere 3.0 loudspeaker: Our Aesthetics and Sound award was conceived to recognize products that are as exciting visually as they are sonically. The winners for both 2012 and 2013 are speakers made by the same company -- Sonus Faber, based in Vicenza, Italy -- and both were reviewed by Jeff Fritz for SoundStage! Ultra. In 2012 it was the Amati Evolution ($36,000/pair), while for 2013 it’s the Venere 3.0 ($3500-$4000/pair, depending on finish).

That Sonus Faber has won this award two years running should be no surprise, given their unique ability to mix high style with superb sound, even when creating entry-level products such as their Venere models. When I visited the company last July, I saw firsthand how industrial designer Livio Cucuzza and acoustic engineer Paolo Tezzon work closely together, under the guidance of CEO Mauro Grange, to create loudspeakers that satisfy all the senses -- Cucuzza even takes into account how certain materials feel to the touch.

KEF LS50 loudspeaker: The KEF LS50, which I reviewed on this site last April, was a natural fit for this award -- its performance, build, and performance punch way above its price of $1500/pair.

But more needs to be said about the LS50, because its impact goes beyond its being simply a great value. In an industry in which much of the focus is on the most expensive products, particularly loudspeakers, the LS50 stole the show in 2013 -- I saw more positive reviews of the LS50 in competing print and online magazines, and more discussion of it on online forums, than for any other speaker. And from what I could gather, it wasn’t all talk; KEF seems to have sold a lot of LS50s.

PSB Alpha PS1 powered loudspeaker: This was our top pick for our new Desktop Loudspeakers category. A pair retails for only $299 -- and since they’re powered, you don’t even need an external amp.

Our choice was mainly based on Hans Wetzel’s review on SoundStage! Access. He praised the PS1 for its high level of engineering, which resulted in an “evenhanded sound [that] stands in contrast to those of many competing desktop speakers that portray themselves as being more full-bodied than they really are.” Our choice was also influenced by Hans’s continued high praise of the PS1 to our staff in the months that followed. Unable to believe how good these little speakers sounded for so little money, he just couldn’t stop talking about them.

Oppo Digital BDP-105 Blu-ray player: The BDP-105 isn’t merely a 3D-capable Blu-ray player, but a universal disc player (CD, HDCD, SACD, DVD-Video, even DVD-Audio), DAC, preamplifier, music server, and more. And it sells for only $1199. As Roger Kanno said in his SoundStage! Xperience review, “If you’re contemplating assembling a system with an all-in-one source component and preamp, I can’t recommend the BDP-105 highly enough.” Neither can we. The BDP-105 is versatile, well priced, and high performing -- reasons that combine to make it an easy winner in this category.

NAD C 390DD Direct Digital integrated amplifier: Almost five years ago, NAD debuted their Direct Digital amplifier technology in their Masters Series M2 integrated amplifier (still available for $6000). If it were still that year, you’d find the M2 under the Pioneering Design Achievement heading -- it was a landmark design. But it’s 2013, and our focus is now on the M2’s cost-effective descendant, the C 390DD.

When, last February, Colin Smith reviewed the NAD C 390DD for this site, he called it “the most sophisticated amplifier available at its price.” That price is a paltry $2599 -- less than half the cost of the M2. Colin went on: “That it’s also a superb music-reproduction device and sounds invisible is a major achievement, and, at its price, a phenomenal one.” The NAD C 390DD was a natural choice for this year’s Exceptional Value: Integrated Amplifiers award.

Definitive Technology Sound Cylinder Bluetooth loudspeaker: It’s impossible to know if, when he conceived the Apple iPad, Steve Jobs ever foresaw a market for external portable loudspeakers as large as the one that now exists, but I’d be surprised if he didn’t. Home-theater speaker systems and flat-screen panels go hand in hand, so why not external speakers and iPads, given how often these little devices are now used to watch movies and shows, and to listen to music?

That said, of the plethora of external speakers now on the market, the best we know of for audiophiles is Definitive Technology’s Sound Cylinder, which Ian White reviewed for SoundStage! Xperience in August 2013, and was so smitten by that he ended up buying two. And if you think $199 is steep, consider that a good home-theater system costs much more than a large flat-panel display -- the fact that the Sound Cylinder costs considerably less than an entry-level iPad, but can substantially increase the iPad’s sound quality, makes it quite a good deal. Which is why it has received the Exceptional Value: iDevices and Related award for 2013.

Axiom Audio ADA-1000 multichannel amplifier: This amplifier, which Roger Kanno reviewed for SoundStage! Xperience in May, costs just $1340 and is rated to deliver up to 125Wpc into 8 ohms, all five channels driven -- a lot of power for the price. All the more surprising is that the ADA-100 is designed and manufactured in Canada, not the Far East, where most entry-level amps are now made. That high value is why the ADA-1000 has won our 2013 Exceptional Value: Home-Theater Components award, and why Roger concluded his review with this sage advice: “If you’re looking for an amplifier to add some power and refinement to a budget-minded system at an almost unbelievably low price, look no further.”

JL Audio E-Sub e112 subwoofer: JL Audio is a name that always comes up when the conversation turns to super-high-quality subwoofers. Until now, though, JLA’s subs have been fairly expensive items that many couldn’t consider buying. That has changed with their new E-Sub series, which comprises the e110 ($1500-$1700, depending on finish) and the model Jeff Fritz reviewed last fall for SoundStage! Hi-Fi, the e112 ($1900-$2100). The e112 offers a level of performance so high that Jeff called it “the no-brainer buy of the year.” With that kind of praise, it’s no surprise that the JLA E-Sub e112 has won the 2013 Exceptional Value: Subwoofers award.

Gryphon Audio Designs Mephisto stereo power amplifier: In his SoundStage! Ultra review of the 238-pound Mephisto ($57,000), Jeff Fritz said that not only is it the best product Gryphon Audio has ever produced, it was the best amplifier he’d ever heard. Does anything more need to be said? Only that the Mephisto was, by a wide margin, the obvious choice for the Outstanding Performance: Power Amplifiers award for 2013. For those who can afford it, this is a truly great amplifier.

Magico S5 loudspeaker: In my review of the S5 for SoundStage! Hi-Fi, I said that it was probably the best speaker available at its price ($29,500-$32,500/pair, depending on finish), and was “among a handful of great-sounding speakers at any price.” With those kinds of accolades, along with awe-inspiring build quality that sets a new standard for speakers at or near this price, it’s no wonder that the S5 received the Outstanding Performance: Stereo Loudspeakers award for 2013. Nor is Magico a one-hit wonder -- last year, the company won an award for their Q7 loudspeaker.

Bryston B135 SST2 integrated amplifier: The B135 SST2 could also have won this year’s Exceptional Value award -- it costs only $4695. Philip Beaudette, who has probably reviewed more integrated amplifiers than anyone else on our staff, said this about it in his SoundStage! Hi-Fi review: “You’ll have to spend significantly more to improve on the B135’s sound, and even so, those improvements are likely to be small.” Since then, he’s bought one to use as a reference. So simply saying that the B135 SST2 is good for the price doesn’t do this exceptional integrated amplifier justice -- its high level of performance qualifies the B135 SST2 to win the 2013 Outstanding Performance: Integrated Amplifiers award.

EMM Labs DAC2X digital-to-analog converter: Last spring, when Howard Kneller reviewed the DAC2X ($15,500) for SoundStage! Ultra, he said: “There can be no dispute that the DAC2X is one of only a few one-box DACs that can reasonably claim to intrude on the state of the art.” Reading that review and having a long talk with designer Ed Meitner at the 2013 Consumer Electronics Show piqued my interest in this product, and I arranged to listen to the DAC2X in my own system. I was thrown for a loop by how it allowed me to hear every detail in every recording I have, while never sounding fatiguing, clinical, or cold. It is now my new reference -- not just for digital playback, but for any type of playback. As I describe in a blog post on SoundStage! Global, the DAC2X has eviscerated any desire I had to set up a turntable again. What a fantastic DAC!

Next, and next year

That concludes the summary of the 2013 SoundStage! Network Product of the Year awards -- and we’re already considering those for 2014. This month we’ve published reviews of yet more products, some of which are now contenders for the 2014 Product of the Year awards. This month we’re also covering the 2014 Consumer Electronics Show, in Las Vegas, where we’ll undoubtedly see more products that will end up in our review queues, and some of which will become contenders for the 2014 POTY awards. One year from now, you’ll find out which of them have won.