A Great Tour in Great Britain -- Visiting KEF, Monitor Audio, and the Unexpected

As I finished writing last month’s editorial, I and our video team were about to board a plane for the UK to visit Monitor Audio and KEF, to shoot episodes for our YouTube channel, SoundStage! InSight. Now, as I write this, it’s only a few days since my return -- the trip is still fresh in my mind, particularly the striking similarities and differences between these two great British speaker companies.

We left for England on Saturday, July 25, and landed at Heathrow Airport, near London, early Sunday morning. From there, we took a taxi to Rayleigh, in Essex, where Monitor Audio is based. We wouldn’t start shooting till Monday, so we had time to kill and needed an adventure. 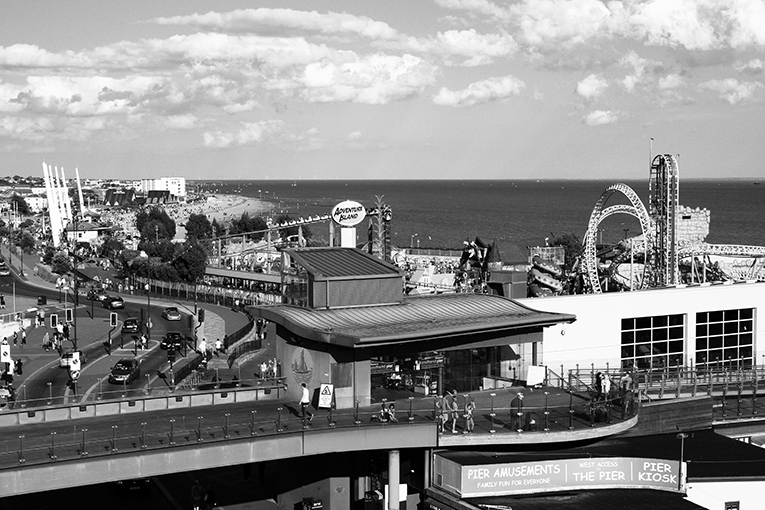 Luckily, that Sunday was one of the hottest days of the year so far. At the encouragement of the hotel receptionists -- “Go see the pier on the ocean, it’s pretty nice” -- we spent £10 and took a taxi to a neighboring town, Southend-on-Sea. We saw things we hadn’t expected: a gorgeous Miami-esque hotel, the Park Inn; a huge shopping center; casinos and restaurants; a sprawling amusement park; an expansive beach (in many places, more mud than sand); pubs that, our cabbie told us, get pretty rowdy at night; a huge bowling alley -- and, finally, Southend Pier itself, more than a mile long (7000’) and extending far out into the Thames Estuary. We stayed at Southend-on-Sea the rest of the day, had a very good time, and the next morning went straight to work. 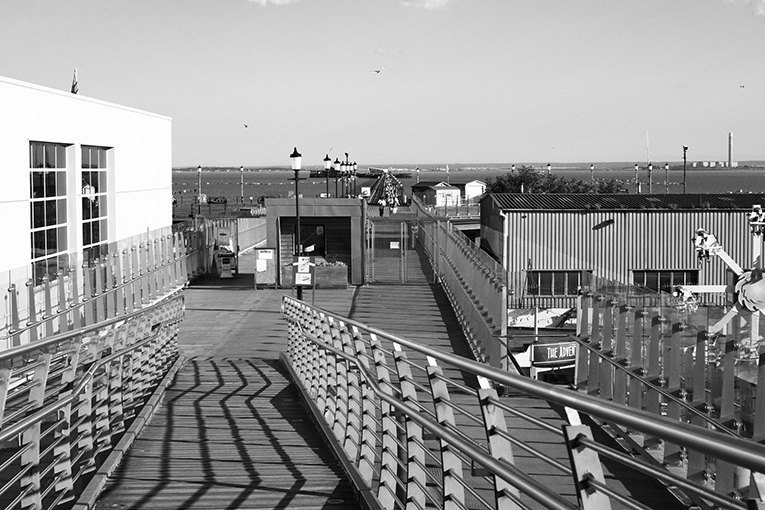 The first sight of Monitor Audio’s building impressed me. The company has been around since the early 1970s, when it was founded by Mo Iqbal. Their present facility, which they’ve occupied for over ten years, is modern and clean, and in that reflects the appearance of their latest speaker models. What’s more, Monitor has been doing well enough that they’ve outgrown their main building -- some of their offices now occupy a building next door. 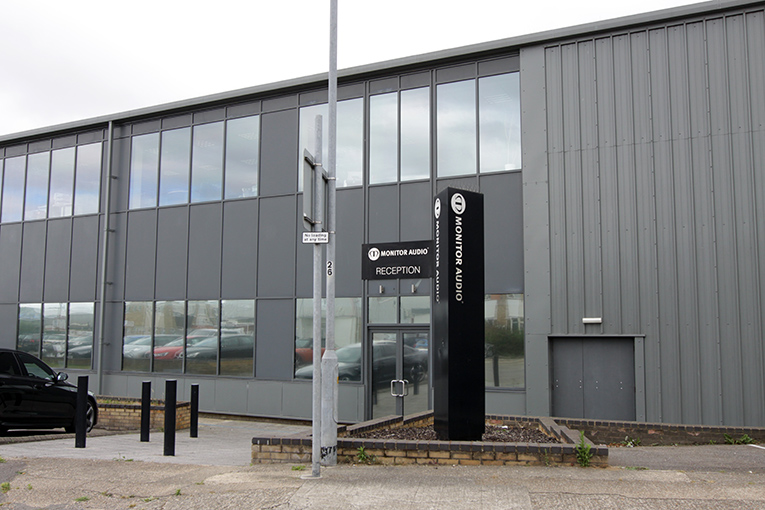 Monitor speakers aren’t made in the UK, but in the Far East. Their reasons for doing so are many, but mainly it comes down to being able to offer speakers of much higher quality at lower prices than would be possible with UK manufacture. Hans Wetzel talked about this in the tour articles he wrote for SoundStage! Global when he visited the UK last year. However, Monitor does all of its acoustical and industrial designing in Rayleigh, in a way that makes this company a little different from most.

Many companies contract out the exterior design of their products. But at Monitor Audio, the acoustics and industrial-design departments are fully in-house, housed in separate spaces, with staffs of roughly the same size. That last surprised me, but indicates how important both are to Monitor. As a result, when they meet to create a product, each team has a lot of pull -- there’s plenty of back-and-forth in the ironing out of all the details. According to Dean Hartley, Monitor’s technical director, sound quality is always paramount, but everyone in the company agrees that a product must also look nice and function well. It’s all about striking the correct balance. 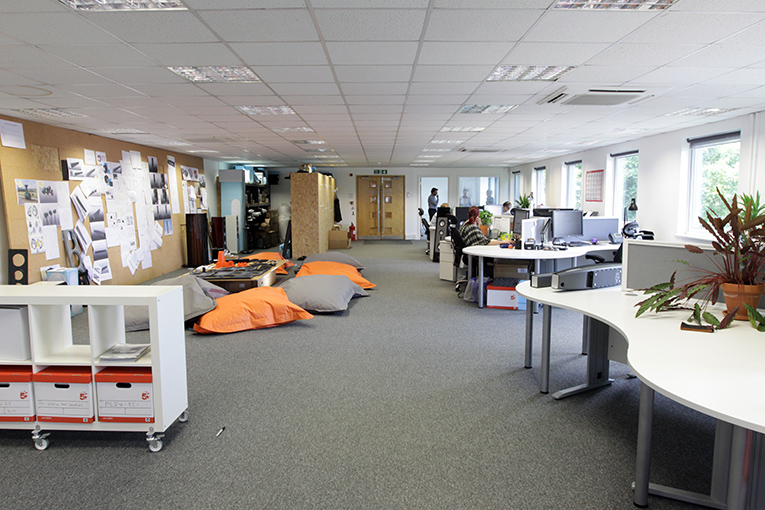 Monitor’s acoustics team designs the speakers and almost all of their parts from scratch -- you won’t find off-the-shelf drivers in a Monitor speaker, as you can in speakers from many other brands. And, like all modern speaker-design teams, Monitor pays plenty of attention to a design’s objective and subjective sides -- which means lots of computer modeling, lots of testing in Monitor’s own anechoic chamber, and lots of rigorous listening. According to Hartley, no product is approved by Monitor’s acoustics team until it measures well and sounds good -- and until the industrial design team says it looks, feels, and acts good, too.

We spent two days shooting footage for two Monitor Audio videos, the first of which is now online. Then we left for KEF, whose offices are in Maidstone, Kent, an hour’s drive south. When we arrived Tuesday evening, there was no time to seek out tourist spots, as we had in Rayleigh; instead, we grabbed a bite to eat with KEF’s brand-development manager, Johan Coorg, talked a bit with him about KEF’s history, and prepared the video gear for the next day. 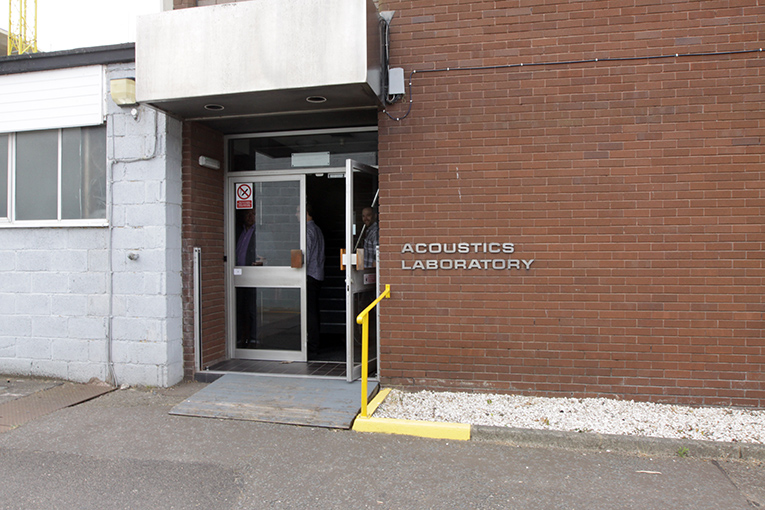 KEF was founded by Raymond Cooke in 1961 -- long enough ago that many have forgotten, if they ever knew, that its name comprises the initials of Kent Engineering & Foundry, the name of their original building’s previous occupants. Cooke, an electrical engineer, is usually described as a “practical man” who built his company on sound engineering principles (pardon the pun). I think he was a visionary -- he invested heavily in advanced technology to improve loudspeaker design long before most other speaker makers did; as far as I know, KEF was the very first speaker manufacturer to use computer modeling to design speaker crossovers, back in the 1970s. What a feeling it was to drive up to this place and see where it all began -- many of the buildings look now just as they did decades ago. The buildings, main lobby, and many of the hallways could easily serve as on-location settings for a British version of Mad Men. 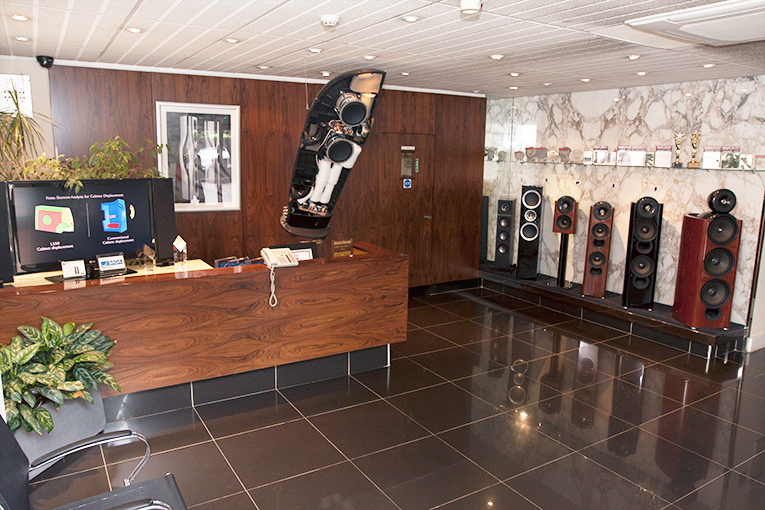 Our visit to this special place almost didn’t happen. Last year, the river directly beside their land rose, overflowed, and flooded pretty much everything. Design offices, manufacturing facilities, warehouses, meeting rooms, sound rooms, the anechoic chamber, the fabulous “KEF museum” containing examples of almost all of the company’s past products -- all were some 3’ deep in water. KEF’s administration pretty much shut down, design work was stifled, and manufacture of the company’s top products -- the entire Reference series, both Blade models, and the flagship Muon are all made in Maidstone -- was halted. (The rest of KEF’s products, such as the R and Q lines of speakers, their headphones, and custom-install models, are made in the Far East.) According to Coorg, the damage was so bad that they considered moving the entire company to a brand-new location elsewhere in town. But with willpower, hard work, ingenuity -- and a good insurance policy -- they were able to restore the original facilities and get back to work within a few months. 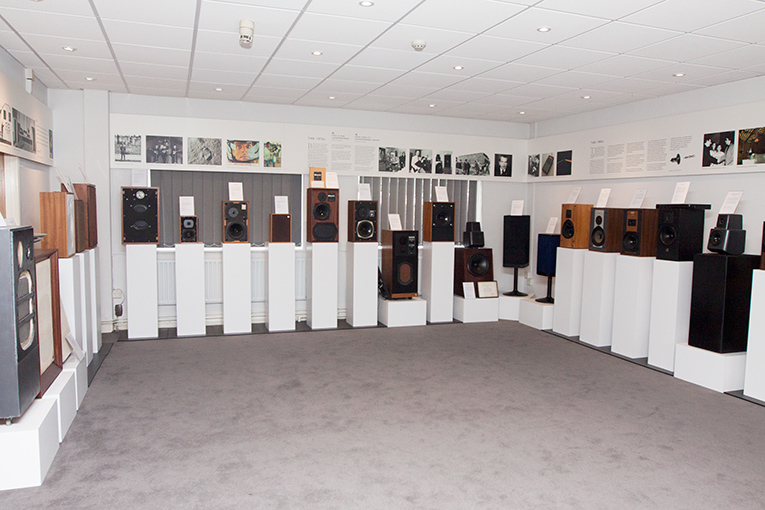 Although a new, posh location would have had some definite benefits, I’m glad KEF got their original digs up and running again. To me, KEF is this place, a feeling that was only reinforced when I saw all of their earlier speaker models in the museum and walked through the design lab, talked to the designers, and saw how they worked. I believe that being in that original location probably helps keep KEF’s DNA intact. And you won’t find off-the-shelf parts in KEF speakers any more than you will in Monitor Audio models -- these guys create from the ground up.

Mark Dodd is KEF’s head of research. I consider him a legend and told him so, which may have surprised him. Among his many accomplishments at KEF and elsewhere, Dodd was the driving force behind the KEF LS50, one of their most successful speakers ever made, and one of my favorites from the company. It’s an amazing little loudspeaker. For the entire interview with Dodd we talked only about the LS50 project -- KEF has sold tens of thousands of pairs, and claim that sales are still going strong. Then there’s Jack O’Clee-Brown, who heads up the acoustical design team. Only in his early 30s, O’Clee-Brown is a wunderkind of speaker design, as evidenced by his innovative work on KEF’s latest-generation Uni-Q drivers, as well as on the Reference and Blade designs. Advancing speaker technology was high on Raymond Cooke’s agenda, and it’s just as high on the agendas of Dodd and O’Clee-Brown and their teams. O’Clee-Brown said it best at the end of our shoot: “We’re keeping going what Raymond Cooke started.” 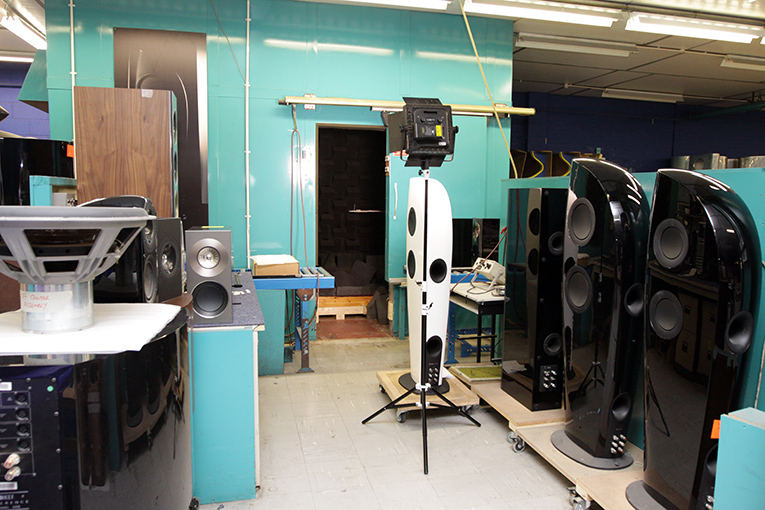 Unlike Monitor Audio, KEF lacks an on-site industrial-design department. Instead, they work with shops elsewhere in England, and in New York and Hong Kong. But here, too, there’s plenty of back-and-forth between the acoustics and design teams to ensure the proper balance of sound, function, and appearance. The results indicate that KEF takes all this as seriously as other top companies do -- their Muon, Blade, and Blade Two are three of the most breathtakingly original and beautiful speakers made.

Every new speaker from KEF is the result of modeling an idea on computers, followed by measuring and listening to the prototypes. O’Clee-Brown, Dodd, and other team members told me that modeling and measurements can take you 90% of the way -- the rest of the design process depends on what happens in the listening room. While that remaining 10% might not seem like much, it’s where some crucial decisions are made. For example, according to Coorg and O’Clee-Brown, by the time the Blade Two got to the listening room, it was almost perfect. But after listening to the prototype at length, they heard a few niggling things they didn’t like -- things the measurements couldn’t have predicted. A few more tweakings of the design and more listening sessions ensued before the Blade Two was deemed perfect. Dodd told a similar story about the LS50. 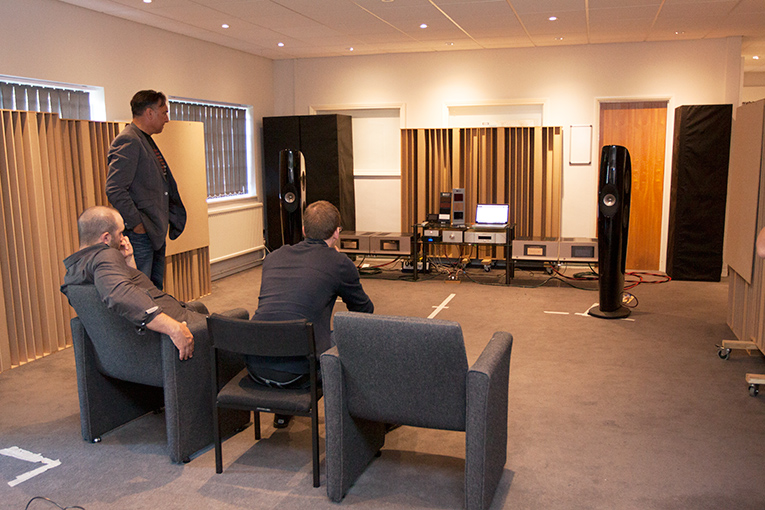 Some believe that measurement-conscious companies do it all with computer modeling and measurement microphones. But what I saw and heard at KEF and Monitor Audio were consistent with what I’ve seen and heard at every other great speaker company I’ve visited: It’s ears that ultimately decide.