Including its outrigger base, conical feet, and protruding binding posts, KEF’s Reference 3 measures 47.3”H x 13.7”W x 18.5”D and weighs 113.1 pounds. At $13,999.99 USD per pair, it’s the smaller and cheaper of the two floorstanders in the Reference series -- above it is the Reference 5 ($18,999.99/pair). And yet, as Doug Schneider found while listening to it for his April 2017 review on SoundStage! Hi-Fi, the Reference 3 can be compared to some of the best speakers he’s heard, even at twice the price.

Like all of KEF’s Reference models, the 3 has a 3/8”-thick baffle made of two sheets of aluminum sandwiching a resin core. This baffle is affixed to the cabinet via rods that run the enclosure’s depth and terminate at its rear. The cabinet is made of MDF and is available in three standard finishes: Piano Black, Satin American Walnut, or Luxury Gloss Rosewood. Also available are two Foundry Edition finishes unique to the 3 and 5: Blue Ice White and Copper Black Aluminum. 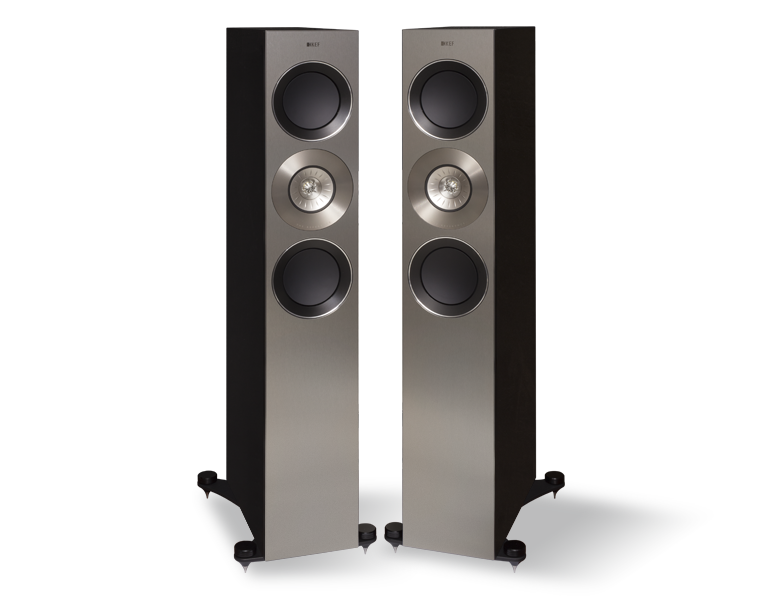 The Reference 3’s drivers include one of KEF’s proprietary Uni-Q arrays: a 1” dome tweeter set into the throat of a 5” midrange cone; above and below this are two 6.5” woofers. All driver diaphragms are made of aluminum. The woofers have the same operating bandwidth, making the Reference 3 a three-way design. On the rear panel are two sets of speaker binding posts, and Link knobs for single-wiring, biwiring, or biamping. Doug single-wired his review pair and primarily drove them with either his JE Audio VM60 tubed mono amps or Blue Circle Audio BC204 stereo amp, a hybrid design with a tubed input stage and a solid-state output stage. 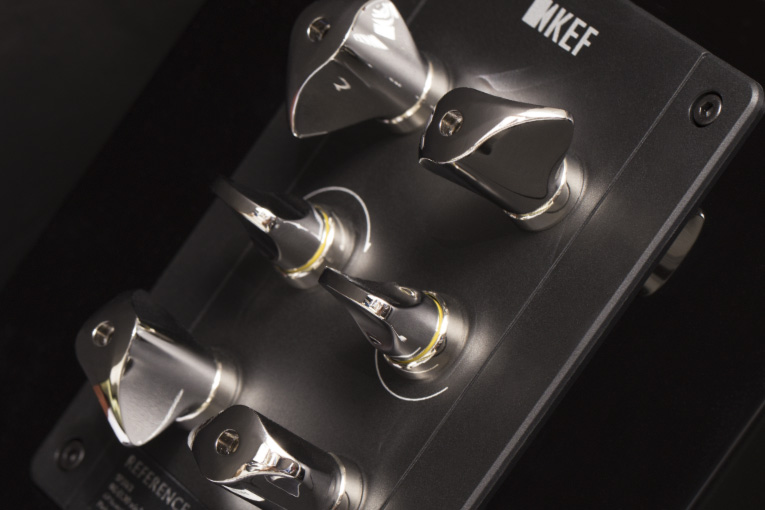 Venting to the rear are the Reference 3’s two ports, whose output can be adjusted with longer and shorter tubes of foam (both supplied), to help tune the 3’s bass output to the room. As Doug described in his review,

KEF specifies the Reference 3’s low-end response with the short tubes installed as 38Hz; with the longer tubes, it’s 35Hz. . . . Which port tubes you should use will depend on your taste in sound and how the Reference 3s interact with your room’s acoustic. I liked the punch with the short tubes, but for almost all my listening I used the longer tubes: the bass went slightly deeper, the entire low end didn’t excite modes in my room and thus sounded very even -- and kick drums still had enough kick.

Listening through the Ref 3s to “Almost Like the Blues,” from Leonard Cohen’s Popular Problems (24-bit/96kHz FLAC, Columbia) -- a recording I’d also played through the Ref 1s -- I heard depth in the low end, particularly from the bass guitar, that I know the Ref 1s hadn’t reached in my room. That extended bass depth let me not only hear more low frequencies, it resulted in a greater sense of space and a more fulsome sound overall.

Cohen’s voice sounded incredibly rich, very robust but not overly so -- as far as I know, the 3s didn’t exaggerate anything that’s inherent in this recording. The level of detail revealed was also superb. For example, it was so easy to hear the changing sound of his voice as he moves his mouth closer to and then a little away from the microphone that I felt I could actually see it happening -- as though I were there in the studio, at the other end of his vocal-mike feed. . . . 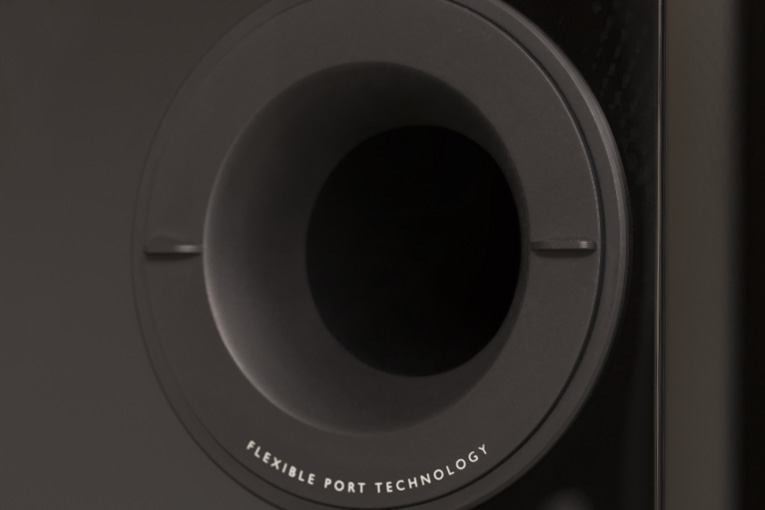 Doug also found that the Reference 3 was versatile in terms of how quietly or loudly it could be played:

Like the Reference 1 and Blade Two, the Reference 3 could sound great at listening levels akin to a whisper, but could also take punishing amounts of power and play louder than most would ever need it to -- all while remaining ultraclear and obscuring no details. . . . In my experience, that’s one of the great things about KEF speakers: they can play with incredible accuracy, from super-quiet to unbelievably loud, but the quality of sound remains the same.

Doug also commended the Reference 3’s tonal balance for being “as good as it gets,” and for extended highs that “never crossed the line to sounding bright.” He also loved how well the Reference 3 passed along “exactly what was on the recording, providing every detail that was there and none that weren’t.” When he played “Misguided Angel” and “Sweet Jane,” from the Cowboy Junkies’ The Trinity Session (16/44.1 FLAC, RCA), he noted “how clear the voices sounded through the KEFs”; he was “enthralled by the size of the soundstage, and how easy it was to focus on each musician’s sound and his or her position in space.” 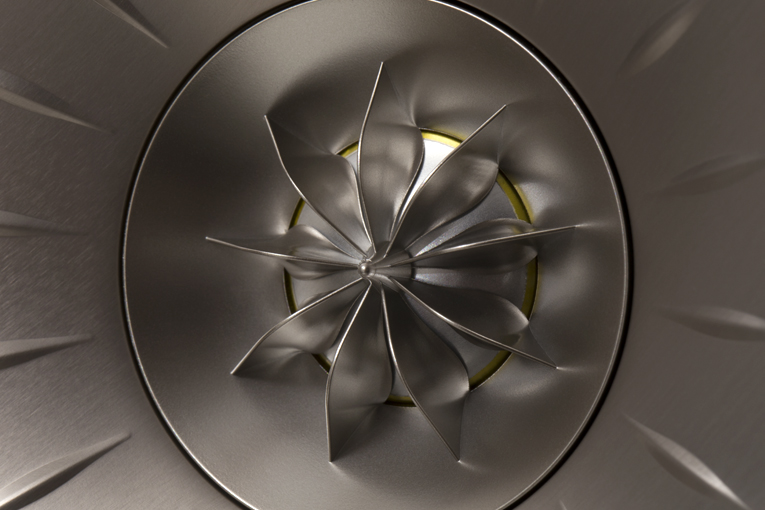 Extremely impressed with what he heard from the Reference 3, Doug chose not to compare it to like-priced competitors, but instead to two far more costly speakers: KEF’s own Blade Two ($24,999.99) and Vivid Audio’s Oval B1 Decade ($28,000). Doug found that, pitted against the big KEF, “neither the B1 Decade nor the Reference 3 could approach the Blade Two’s bass depth, weight, and slam.” Basically, the Reference 3 and B1 Decade only hinted at the bottom octave of the audioband (20-40Hz) -- the Blade Two can reproduce almost all of it, with full power and tremendous control. Despite that difference, the Blade Two and Reference 3 had some similarities, along with some individual strengths:

In terms of neutrality and detail from the midrange up, the Reference 3 and Blade Two for the most part ran neck and neck, and the two pairs of speakers projected soundstages of comparable width and depth. Where the Blade Twos stepped ahead of the Reference 3s was in imaging -- the Twos can position images anywhere on the stage with uncanny precision. By a lesser margin, the Blade Twos also sounded a bit more open in my room than did the Ref 3s -- as did the Oval B1 Decades. . . . They projected their sounds more freely into the room, leaving no telltale cues of sounds emanating from their enclosures.

Where the Reference 3 handily beat the Blade Two was in lower-midrange clarity -- the region where the Uni-Q driver hands off to the woofers. When I reviewed the Blade Two, that deficiency was most noticeable when I played “The Road,” from Jackson Browne’s Running on Empty [(24/192 FLAC, Asylum)], where, at the 2:58 mark, the recording shifts from Room 301 of the Cross Keys Inn to a concert at the Garden State Arts Center. As I wrote in my review of the Blade Two: “it was here that the Blade Twos added a little bit of chestiness and congestion that the Vivid B1Ds didn’t.” And neither did the Reference 3s -- to my ears, their woofers and midrange achieved a better blend. 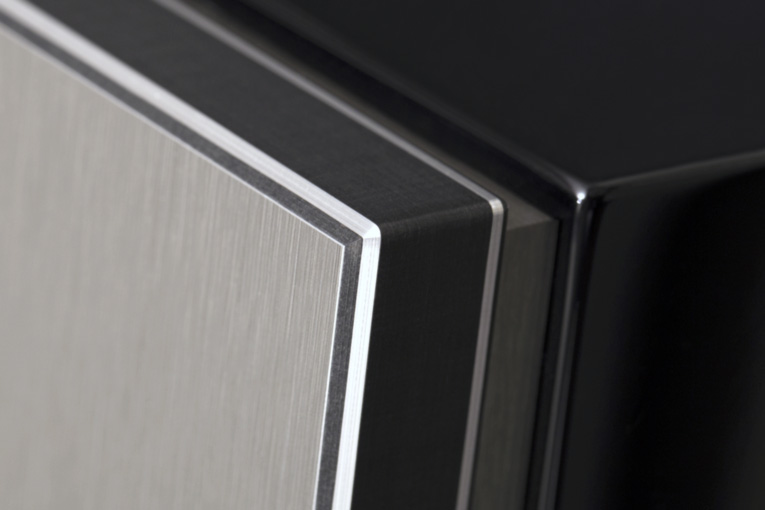 Comparing the Reference 3 to the Oval B1 Decade, which he ranks among the two best speakers he’s ever heard (the other is Vivid’s Giya G2, $50,000/pair), Doug found that “their sounds were more closely aligned than the Reference 3s and Blade Twos were.” Where Doug did find differences, they favored the B1 Decade -- but they were also much smaller than the difference in price would suggest:

While there was no criterion of sound quality in which the Reference 3s beat the Oval B1 Decades, in some I subtly preferred what I heard from the Vivids. They sounded just a bit more open and “boxless” in my room, projecting sound just a bit more freely and transparently. They sounded a little more incisive and immediate -- more or less a hallmark of Vivid designs -- partly in the midrange, but mostly in the bass, which sounded ultraquick. I also thought that the Oval B1 Decade could unveil just the tiniest bit more detail from recordings, which could be why they threw soundstages a little wider and deeper than the Reference 3s’.

At the end of his review’s “Sound” section, Doug wrote: “Other than the Reference 3’s minor limitation of being unable to reach the very bottom of the audioband, I consider it to be among the most accurate and revealing speakers I’ve heard.” That combination of high accuracy and extreme resolution throughout most of the audioband is why the Reference 3 can be considered just that -- a reference -- and becomes the sixth KEF loudspeaker to be added to our list of Recommended Reference Components.