SoundStage! founder Doug Schneider and senior contributor Aron Garrecht both went turntable shopping in January. Independently and physically distanced, of course. They each wanted to find a top-tier turntable that would allow them to review the ever-increasing number of turntable-related products on the market, such as phono stages, whether standalone or built into a preamplifier or integrated amplifier, and other components and accessories. For advice, they consulted SoundStage! vinyl guru, Jason Thorpe, who told them both to buy a Pro-Ject Audio Systems RPM 10 Carbon turntable with 10cc Evolution tonearm, which he’d reviewed for SoundStage! Ultra on December 15, 2017. Jason had owned a Pro-Ject RPM 10 before reviewing the RPM 10 Carbon, its successor, and immediately sold it and replaced it with the newer model for the improvements in sound and build.

The RPM 10 Carbon with 10cc Evolution arm is currently priced at $4999 (all prices in USD). Also included in the bundle are Pro-Ject’s Ground it Carbon platform and Connect it 5P-CC phono cable, as well as a record puck. But there is no cartridge included for that price, so for his review, Jason used an Ortofon Quintet Blue moving-coil cartridge, which sells for $524. (In the United States, distributor Sumiko offers the RPM 10 Carbon bundle for $5999, packed with a Sumiko Starling MC cartridge, which itself retails for $1799.) 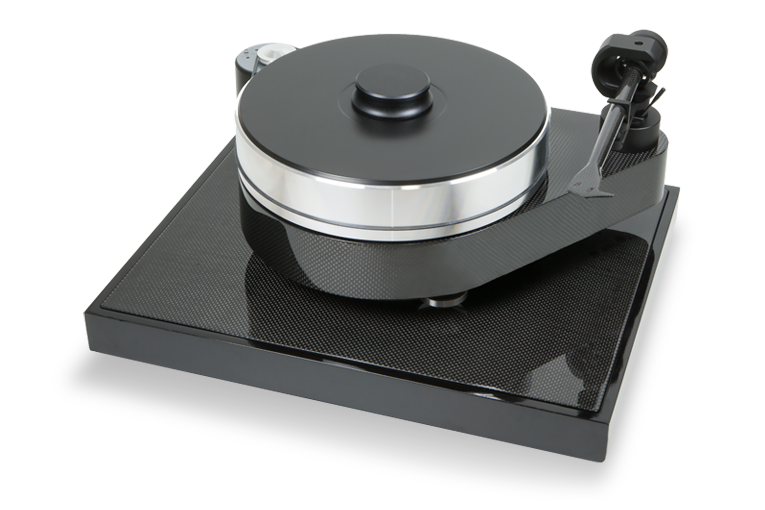 The RPM 10 Carbon features a 2.25″-high, 23-pound, solid-aluminum platter. Bonded to its top is a vinyl mat. As Jason mentioned in his review, “this is one seriously heavy platter.” He also added that the RPM 10 Carbon has “ring magnets in the plinth and platter, which help relieve the bearing of some of the platter’s weight.” The 10cc Evolution tonearm is 10″ long and has a headshell and conical armtube made from a single piece of carbon fiber.

The platter is belt-driven, powered by an external motor fed by a wall-wart DC power supply and switchable between 33⅓ and 45rpm. Jason describes it in his review: “The motor contains the same circuitry as found in Pro-Ject’s Speed Box S electronic motor control and speed-change power supply, which regenerates from the incoming AC a nice, clean power signal. The motor itself rests on an extremely dense, puck-like base.”

According to Pro-Ject’s website, the RPM 10 Carbon’s plinth “features a special CNC machined MDF plate that incorporates hard resin coated steel pellets to form an extra heavy precise sandwich construction. A special complex heat treatment and a carbon surface coating ensures superior low resonance levels.” The plinth rests on the Ground it Carbon isolation platform by way of damping Sorbothane cones. The Ground it Carbon is decoupled from the surface on which it sits via repelling magnetic feet, and according to Pro-Ject, these technologies allow the turntable to be “perfectly decoupled from the surface it is placed on.” The platform, topped with a carbon-fiber finish, measures 19.7″W by 15.7″ by 2.6″H and weighs almost 32 pounds. A lot of that weight comes from the “granular damping material” that’s used as a center filling. 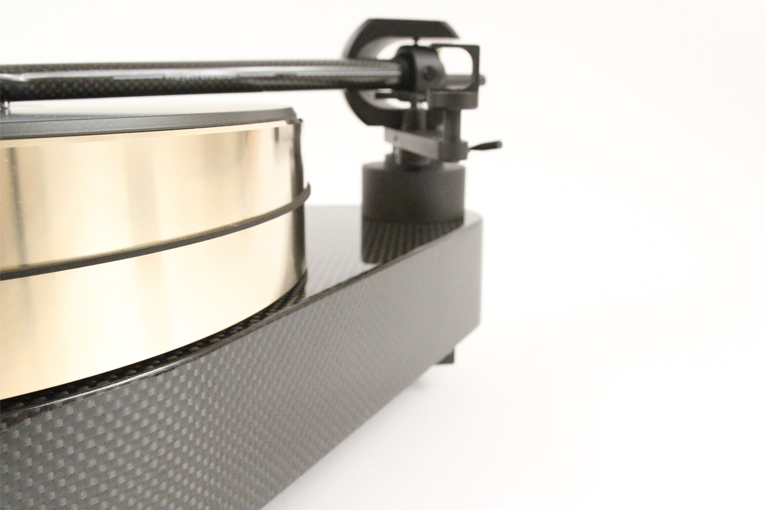 All told, the RPM 10 Carbon is a sizeable, hefty package, which is why Jason had this to say in his review: “While weight isn’t everything in analog, I was impressed when I tallied up the RPM 10 Carbon’s total mass: platter, plinth, motor, tonearm, and base weigh just a hair over 80 pounds.”

Beginning his listening with Talk Talk’s The Colour of Spring (LP, EMI EMCX 3506), Jason immediately heard a difference: “From the first strokes of kick drum and muted snare in ‘Happiness Is Easy,’ I knew that Pro-Ject hadn’t screwed up this one.” In the paragraph that followed, he wrote: “The 10 Carbon exhibited Pro-Ject’s even hand, and their careful mission statement (if I’m permitted to put words in the company’s mouth) of accurately reproducing music without editorializing on it.”

Moving forward with Talk Talk’s Spirit of Eden (LP, EMI E1-46977), Jason stated that he was “blown away by the depth and control the RPM 10 Carbon dredged up from ‘Inheritance.’” He also mentioned that while he’d been playing the track from his copy of the album for 20 years, it was the RPM 10 Carbon that allowed him to “truly distinguish the low bass guitar from the kick drum.” 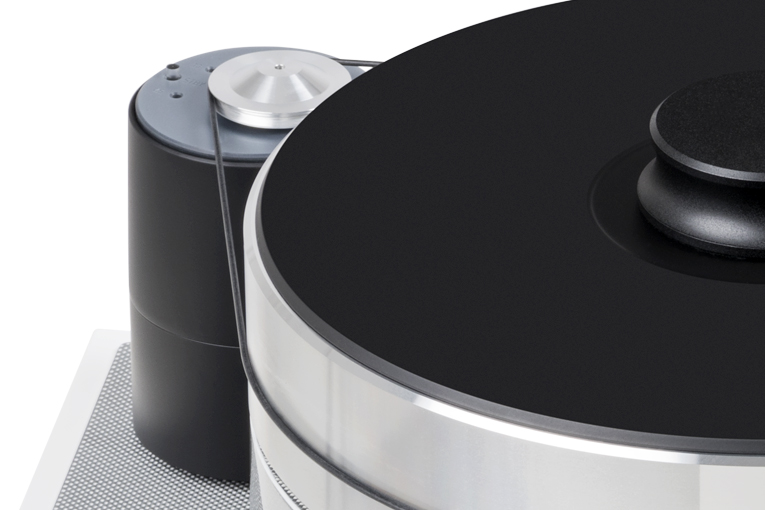 Playing Charles Mingus’s Mingus Mingus Mingus Mingus Mingus (LP, Impulse! IMP-170), Jason explained how he was “captivated by the sense of ‘blackness’ in the background of Duke Ellington’s ‘Mood Indigo,’” and that, with the same track, “a huge, peaceful acoustic” filled his listening room. From the same album, he added that on track 1, “II B.S.,” Jaki Byard’s piano “snapped out with firecracker jump,” and went on to say: “What’s important here was how the 10 Carbon was able to untangle such complicated music without mush or confusion. . . . I could almost see it removing aural fluff from the music’s actual threads, making it easier to hear disparate lines.”

The final album Jason used for his review of the turntable was Duke Ellington’s Indigos (LP, Columbia CS 8053/Impex IMP6010). After describing some specific sonic attributes of what he heard, Jason summed up his impressions of the RPM 10 Carbon’s reproduction of the LP with this: “Normally when I listen to Indigos, I luxuriate in the warm bath of its rich, peaceful ambiance and relax into Ellington’s loping lyricism. But the RPM 10 Carbon changed my reaction to this album I’ve known for years. Now I was actively listening into the intent of the album, finding new information and meaning in a recording whose soundscape had grown to take over my entire listening room.”

The final five words of Jason’s review were “do not ignore this turntable.” When he recommended it to Doug and Aron, he told them that the RPM 10 Carbon is a “forever turntable”—meaning he suspected that they would keep it for a long time and wouldn’t be tempted to buy something else to replace it. They took his advice to heart—Aron and Doug now each own one. 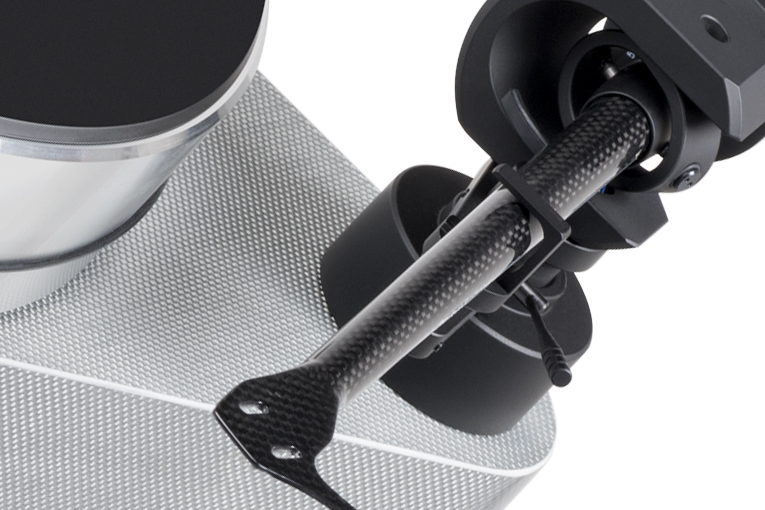 Jason’s favorable review of the RPM 10 Carbon and 10cc Evolution tonearm earned the combo a Reviewers’ Choice award at the time the review was published, and recognition as one of our 2017 Products of the Year when the winners were announced on January 1, 2018. Now it’s time for more recognition—the RPM 10 Carbon and 10cc is this month’s recipient of our Recommended Reference Component award. Jason’s review was published more than three years ago, so this award is obviously long overdue.