Paradigm’s 100F floorstanding loudspeaker, which Doug Schneider reviewed on this site in July, is part of the company’s new Founder Series line. As Doug detailed in the review, the Founder models—there are two more floorstanders, a stand-mounted design, a center-channel, and an LCR (left/center/right) model—are the first to be released “since Scott Bagby, one of the company’s two cofounders, and his son John, bought back full ownership of Paradigm from Shoreview Industries, which had come in as a partner in 2005, when cofounder Jerry VanderMarel left.” Scott Bagby was instrumental in leading the design of the line, and even delayed its release for about a year until he was satisfied with the results. It seems that he made the right call—in his review, Doug declared the 100F to be a “bona-fide hit” and “a high-water mark for Paradigm.” 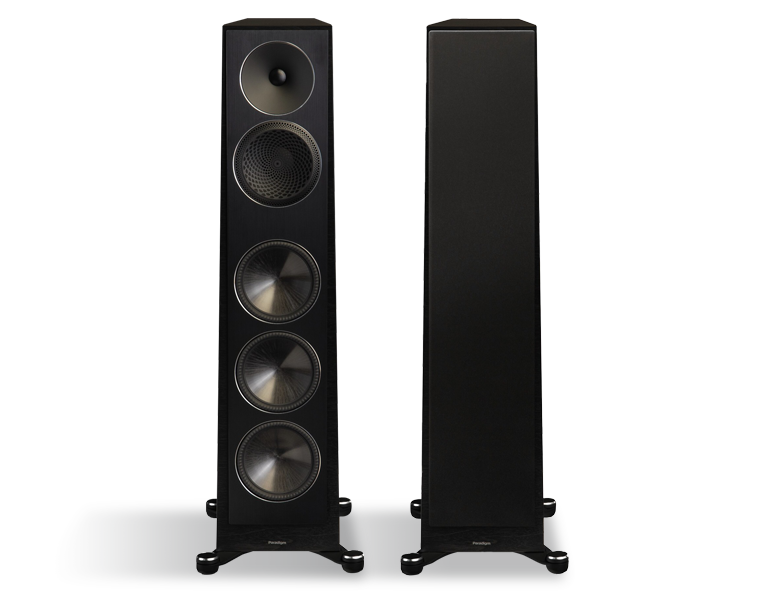 Priced at $5199.98 per pair (all prices in USD), the 100F stands 42″ tall with its outrigger feet attached. The cabinet measures a maximum of 9.5″ wide by 12.75″ deep—the top is narrower than the bottom and the front baffle is wider than the back panel. Most noteworthy, however, are the bevels—one per side, running on an angle from top to bottom—that, as Doug noted, “add style and beauty.” Besides being aesthetically pleasing, however, the side bevels also mark the location of a large brace that runs from top to bottom inside the cabinet. That brace, and multiple horizontal braces attached to the inner front, back, and side walls, make for a stronger and more rigid enclosure, to reduce resonances. Four finishes are available: Walnut, Black Walnut, Midnight Cherry, and Piano Black.

The 100F is a three-way design, featuring a 1″ tweeter with a dome made from a composite of aluminum, magnesium, and ceramic; a 6″ midrange with an aluminum-magnesium cone; and three 7″ woofers with mineral-infused carbon-fiber cones. On the base of the cabinet is a large port to increase bass output. The 100F’s anechoic sensitivity is rated by Paradigm at 93dB (2.83V/1m), though our own measurements showed it to be 88.9dB, which is still quite high. To drive his review 100Fs, Doug used a NAD C 298 power amplifier, which is rated to deliver up to 185Wpc into 8 ohms and easily provided enough power. Driving the C 298 for Doug’s review was an STR preamplifier, made by Anthem, one of Paradigm’s two sister companies (the other is MartinLogan). The STR has a built-in DAC, and Doug connected his Asus Zenbook UX303 laptop computer to the STR’s USB port as the source for his listening. 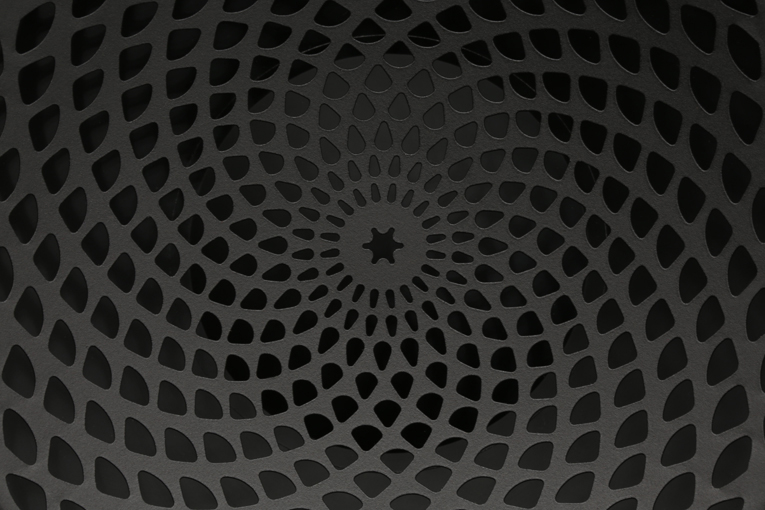 The tweeter’s dome and the entire diaphragm of the midrange are each covered by one of Paradigm’s patented Perforated Phase-Aligning (PPA) lenses. The PPA lens is primarily intended to improve dispersion, but it also adds protection. Surrounding the tweeter is a large waveguide, which, as Doug described in the review, “acoustically amplifies the tweeter’s output without the amplifier having to drive the dome harder, and it controls its dispersion at lower frequencies, to better blend with the midrange driver’s output in the crossover region.” Each woofer has what the company calls an Active Ridge Technology surround, which is said to both increase the cone’s excursion and to lower distortion.

Doug began his critical listening with Lana Del Rey’s “White Dress,” from her album Chemtrails Over the Country Club (16-bit/44.1kHz WAV, Polydor), and immediately found that “there was something very different about the sound of the Founder 100Fs.” He characterized this track as having a “bright, bass-light sound, with a wispiness to Del Rey’s voice that, through too-bright speakers, can be off-putting.” But through the 100Fs, he found that the track was “still a bit bright, but not too much so, and that wispiness, while still quite audible, was now more pleasing than offensive.” Doug also thought the sound of the song was “smoother and richer” than he’d experienced before, and concluded: “It was the best I’d heard it reproduced.” 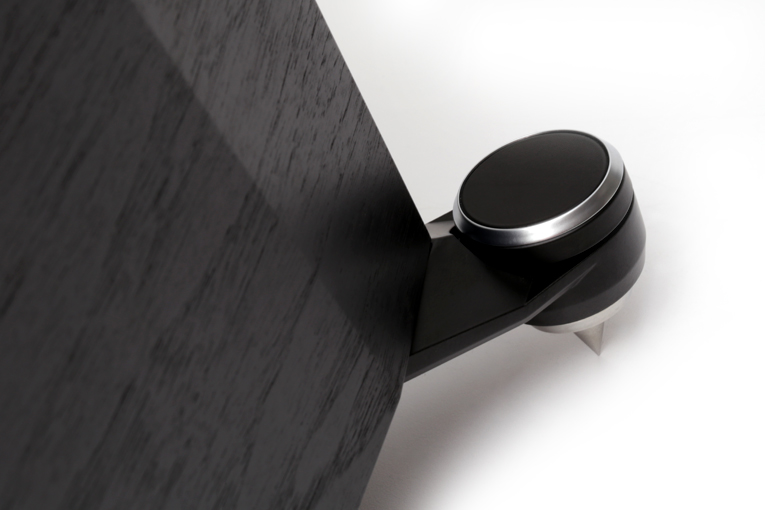 After listening to the next four tracks of Chemtrails Over the Country Club, Doug reported that the midband of the 100F was “as neutral” as the Revel Ultima2 Salon2’s, and also “clearer and a bit more detailed”—something he was able to verify by using a pair of Salon2s, costing more than four times as much as a pair of 100Fs, as a reference.

Doug also wrote about what he heard when he played “Dark but Just a Game,” the only track on the album that he says has “super-deep bass”: “All hell broke loose—the bass energy from the 100Fs was close to what I get from my Revel Salon2s, which stand more than a foot taller and have three 9″ woofers apiece. I could hear and physically feel that the 100Fs didn’t go quite as low in frequency as the Salon2s can in my room—i.e., down to 20Hz—but they got surprisingly close. More impressive was that they delivered all bass frequencies above about 30Hz with as much power and control as the Revels.” 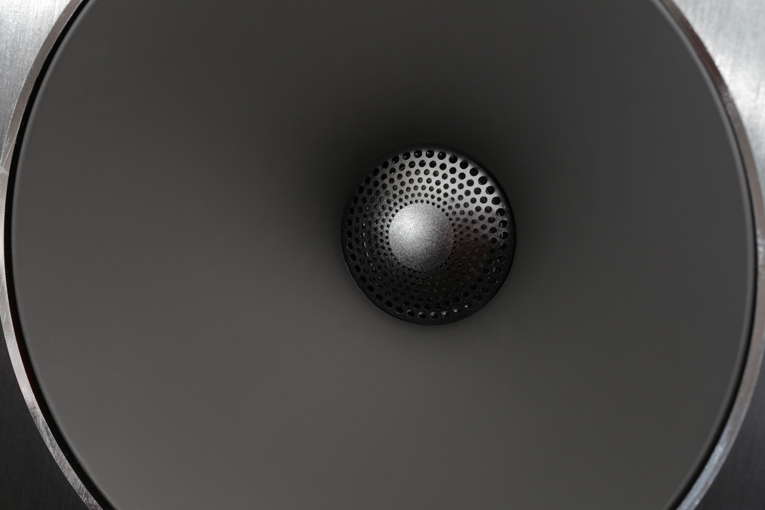 Bruce Cockburn’s Crowing Ignites (16/44.1 WAV, True North), which Doug said he played “at least three dozen times” through the 100Fs, also factored into his conclusions. Having listened to this all-acoustic, all-instrumental album, which is focused mostly on Cockburn playing acoustic guitar, Doug wrote: “the effortless sound of the Founder 100Fs’ powerful woofers was a strength here—the speakers consistently projected the sound of his instrument into my room at real-life volume levels—i.e., as if he were playing it live 9′ in front of me—with no hint of strain.” Then he added that what “stood out” for him was how the final track, “Bells of Gethsemane,” was reproduced: “at low to high volumes, the percussion rang out with such clarity from the 100Fs that I struggled to find anything in the sound to criticize. All I came up with was that the highs weren’t quite as refined as I’m used to from my Revels—but even that is me straining to find something wrong.”

That inability to find something wrong with the 100Fs’ sound was also evident when he played The Trinity Session (16/44.1 WAV, RCA), by Canada’s Cowboy Junkies. Focusing mostly on tracks 2 and 8, “Misguided Angel” and “Sweet Jane,” Doug penned: “I again heard low-end bass extension that came scarily close to the Salon2s’, with everything above 30Hz again reproduced with just as much power and control—the latter most obvious when I concentrated on Peter Timmins’s drumming. And when I focused on sister Margo’s voice, I could tell that the 100F’s bass wasn’t jacked up too high, as I’ve heard from some speakers—it sounded as clean as it does through the best minimonitors, which can’t produce enough deep bass to cloud the midrange.” 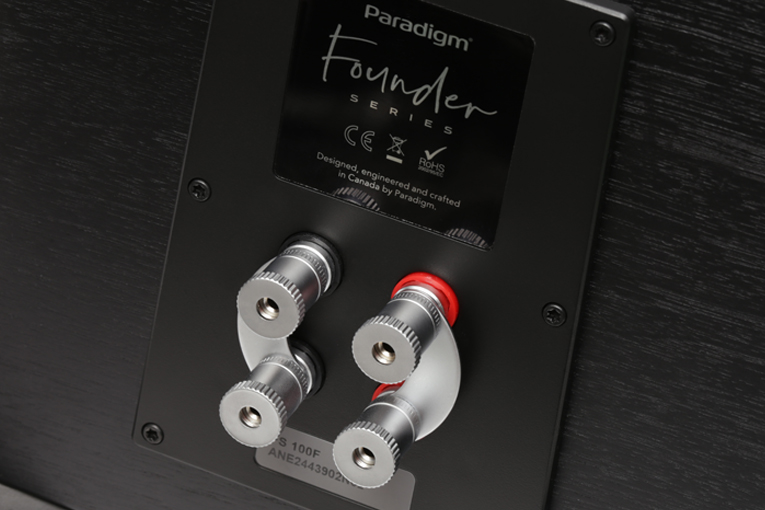 Summing up his impressions, Doug wrote that the “prodigious bass” reproduced by the 100F was “incredible for a modest-size floorstander,” but that he was “just as impressed by the speaker’s overall neutrality from its lowest lows to its highest highs, by its uncanny midrange clarity, and by how it could reproduce a high level of detail from low to high volume levels without ever sounding in-my-face or offensive.” On top of that stellar sound quality, Doug pointed out that the 100F also boasts “dashing good looks.” And as a result of these combined strengths, he wondered if the 100F might become the “sweet spot” not just within the Founder line—but “in Paradigm’s entire range of speakers.” Time will tell if that comes true. But Doug’s admiration for the 100F was why it was recognized by our team with a Reviewers’ Choice award when the review was published—and why it’s also receiving a Recommended Reference Component award this month.