A line-level preamplifier has a seemingly simple task: provide system source selection and volume control. Yet the preamplifier must also buffer multiple sources (each with its own characteristics and possible foibles) and provide a robust signal to the power amplifier. The traditional volume control itself is a study in compromise, as even the best discrete solutions balance the signal attenuation ladder against non-linear artifacts imposed by resistors of differing values -- their particular impedance characteristics impacting the dynamic musical signals flowing through. That a preamplifier can make or break a playback system’s ability to engage the listener with the life and energy of the recorded performance is obvious to any seasoned listener. Unfortunately, experience teaches that preamplifiers too often rob music of its joie de vivre, flatten its soundstage, and etch the performance with artifice. Tube-based examples seem generally to fare well, although often with some coloration and bloom (however pleasant they may be).

While we often get excited whenever a superlative piece of gear crosses the SoundStage! Hi-Fi transom, our unfettered ebullience for the Ayre KX-R is almost unseemly. Recipient of the SoundStage! Network 2010 Product of the Year award in the electronics category, the KX-R is not only accomplished, but pushes the boundaries of solid-state design. While certainly expensive at $18,500, it nevertheless represents a sterling investment that will provide annual returns of sonic splendor.

Slim at 17.25" wide, 11.5" deep, and only 3.75" high, the KX-R is jam packed with connectivity and features. Inputs abound, with a total of eight: four balanced (XLR) and four single-ended (RCA). On the output side, it offers two pairs of balanced (XLR) outputs, as well as two balanced (XLR) tape outputs. On the front panel, the central display is flanked by two dials and two soft-touch buttons controlling, from left to right: On/Standby, Source Selection, Volume, and Mute. Those same controls are repeated on the full-function, backlit remote control. Ergonomic touches include the activation and naming of each input (only activated inputs are selectable). For each such input, theater bypass is available, as is balance control and +/-3dB of gain to facilitate level-matching. The silky smooth operation of the fly-by-wire rotary controls is lust inspiring.

Seamless, with beveled edges and a luxurious "lenticular" finish, contemporary elegance abounds. Yet the exterior only hints at the beauty within. Sleek and compact, the KX-R is a heavyweight that tips the scales at 40 pounds. Machined from a 75-pound billet of aluminum, the unibody chassis is hollowed out from underneath to form individual chambers for all critical subassemblies. Immediately behind the front surface are separate partitions for the display, logic and control devices, and the central transformer. The remaining suite of compartments is laid out in mirror-image fashion (split down the center line) to accommodate the fly-by-wire motors, the volume control subassemblies, and the all-important short-signal-path analog circuitry. Wiring channels are embedded into the interior walls to provide further shielding of signals. The result is an anti-resonant structure that shields sensitive circuitry from RFI and EMI, whether external or internal. 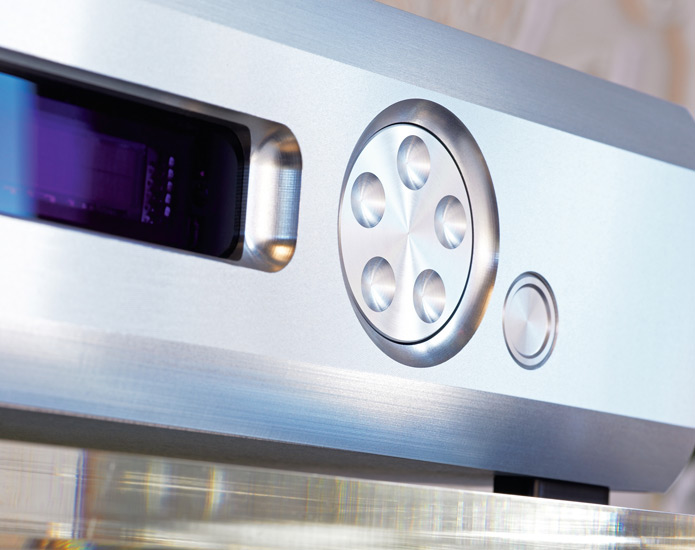 The star of the KX-R show, however, must be the introduction of the revolutionary Variable Gain Transconductance (VGT) volume control circuit. Ayre’s VGT differs from traditional volume controls in that it’s been relocated and embedded into the main gain block rather than left on its own as a separate circuit element. In a normal preamplifier a traditional volume control first attenuates the incoming signal, after which a fixed amount of gain is added. But with VGT, it’s the gain stage itself that’s modulated to provide variable gain in 60, 1dB steps. The VGT circuit is unique in that it sounds the same at all volume settings. The design eliminates frequency-response problems intrinsic to traditional volume controls, and it allows for an input impedance of 1 megaohm for single-ended sources (2 megaohms for balanced sources), thereby minimizing interconnect cable-induced colorations and increasing system-level accuracy. VGT also allows the signal-to-noise ratio to remain constant regardless of the selected volume, providing as much as a 20dB increase in S/N in real-world conditions. Reviewer Pete Roth, who’s used the KX-R as a personal reference for the past three years, has confirmed both the impact and importance of VGT.

This preamplifier allows greater detail retrieval of the source material and offers a higher degree of involvement, enjoyment, and honesty. Ayre eschews parlor tricks such as an overemphasis of leading-edge transient information, relying instead on circuit design, implementation, and system integration. Unlike lesser solid-state gear that tends to devitalize and sterilize the music, the KX-R distinguishes itself from the field and transmits intact the emotional vitality, verve, and vigor of album after album. Simultaneously presenting both macrodynamic and microdynamic information, the KX-R is unsurpassed at presenting a silent noise floor, extraordinary signal-to-noise levels, and unfettered dynamics. Unlike all but the smallest handful of challengers, this Ayre component presents detail upon detail, yet at the same time remains relaxing and never fatiguing. It also challenges all but the best valve-based designs in transmitting a fully realized soundstage of three-dimensional instruments within a three-dimensional space.

Pete Roth concluded that the KX-R is the most complete product Ayre has ever made -- a defining achievement for a company known for its accomplishments. It’s an ideal reference tool for Pete’s role as a reviewer and an ideal instrument for his audiophile passions. It has been Ayre head-honcho Charles Hansen’s aim to unite, without compromise, the vitality, musicality, and sense of real instruments occupying real space presented by the very best tube amps with the dead-quiet background and top-to-bottom consistency offered by the finest examples of solid-state design. In the KX-R preamplifier he has achieved his goal, making it one of our Recommended References.