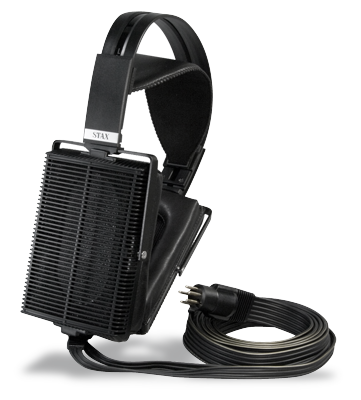 Stax Ltd. is nearly synonymous with electrostatic headphones -- or Earspeakers, as Stax likes to call them. The small Japanese company has been continually refining the technology since their release of the SR-1, in 1960. Stax headphones are the choice of many top recording engineers -- especially for classical and audiophile projects, where every last sonic detail matters. Most of the attention goes to their pricey Omega series, but Stax offers a complete range of headphones and headphone amplifiers. In January 2012, S. Andrea Sundaram reviewed the latest iteration of their Lambda series, the SR-507 Lambda Signature, for SoundStage! Xperience.

Stax first introduced headphones bearing the Lambda moniker in 1979. Upgrades for the latest generation include a thinner diaphragm and a new resin material for the mounting structure. The arc assembly has click-stop adjustments, and the padding around the earcups is covered in genuine lambskin. The headphones themselves weigh only 10.4 ounces, but the nondetachable cord brings the weight up to 16.4 ounces. Andrea found the SR-507s comfortable, if a bit odd-looking.

Andrea found himself most impressed by the SR-507s’ incredible sense of openness, which "allowed voices and instruments to breathe, and their notes to decay, almost as they do in real life, or through the very best loudspeakers in the best rooms." He gave equal praise to their handling of the transients that begin those notes -- whether from pianos, plucked strings, or percussion instruments. In the middles of notes, he found that voices and instrumental timbres were rendered just to the warm side of neutral when using the SR-507s with the WooAudio GES amplifier, but a little thin with Stax’s own SRM-006T amp. The SR-507s should be capable of neutrality when used with an amplifier whose sound is between the two.

The SR-507s don’t favor any particular type of music -- they handle with equal aplomb the nuance and delicacy of a single instrument, or the large dynamic swings and complexity of a full symphony orchestra. With rock recordings, Andrea commented that they "drove the way they should, seared the way they should, and generally could wreak musical havoc when asked to." His one criticism of the SR-507s’ sound was that the bass lacked a little heft. While delivering full extension and some punch, they wouldn’t be the first choice of bass heads.

Andrea made a detailed comparison of the Stax SR-507 and four of the top headphones that can be driven from a standard headphone output: the HiFiMan HE-500, Audeze LCD 2, Sennheiser HD 800, and Ultrasone Edition 8. Each had its strengths, but "In terms of detail, transparency, and accuracy of transients, the Stax SR-507s ran circles around all of them." For these criteria and for instrumental timbres -- all of which tend to rank high on audiophiles’ checklists -- he felt that doing any better would cost significantly more than the SR-507s’ price of $1099 USD. Though electrostatic headphones require a specialized amplifier, Andrea commented that dynamic headphones, too, give their best only when driven by dedicated amplification -- making the total system prices comparable.

The Stax SR-507 Lambda Signature headphones deliver more of what’s on a recording than anything else at or near their price. That is precisely what makes them a Recommended Reference Component, and why S. Andrea Sundaram holds them in such high regard -- and uses them as a reference against which to judge other headphones.