It wasn’t so many years ago that the integrated amplifier was considered merely an entry-level component, something to buy before you could afford more costly separates: a preamplifier and power amplifier. That changed when a number of companies set out to produce uncompromised integrated amplifiers that could compete head-on with separates. When they succeeded, high performance no longer had to be traded off for single-box convenience. One of the newest, most successful examples of this new breed of integrateds is the Moon Evolution 700i ($13,000 USD), from Canada’s Simaudio. It’s Simaudio’s most expensive and ambitious integrated amplifier yet, and Philip Beaudette reviewed it in SoundStage! Hi-Fi last month.

The 700i is a dual-mono, fully balanced design that uses six proprietary Moon output devices per channel. Its transformers, too, are unique to Simaudio. The 700i is claimed to deliver 175Wpc into 8 ohms or 350Wpc into 4 ohms, which makes it powerful enough to drive most loudspeakers used in typical listening rooms. Among the 700i’s many features are five pairs of single-ended inputs and one balanced pair, all individually configurable, via the remote or front-panel controls, for display name, gain (+/-10dB), home-theater bypass, and maximum volume setting. The volume attenuator is Simaudio’s M-eVOL2, a proprietary design with 530 steps, in increments of 1 and 0.1dB, that’s said to attenuate the volume level with no sonic degradation, regardless of output level.

The 700i’s casework is exceptional and its weight is substantial: more than 50 pounds. Its cheeks are always silver, but the 700i’s faceplate can be had in silver or black. The supplied remote control, Simaudio’s FRM-3, is backlit and as sturdy as anyone will ever need. Everything about the 700i is impressive, including its warranty -- ten years, which is two to three times longer than most -- and, most of all, its sound.

Over the last several years, Philip Beaudette has reviewed many integrated amplifiers for the SoundStage! Network, and he found that the 700i surpassed them all in every way. What took him most aback was its clarity, which he attributed to its extremely low noise. As he said in his review, “It was truly exceptional in its clarity. The 700i sounded unbelievably clean, effortlessly unraveling detail to let me follow even complex musical passages with ease. But uncovering detail does not, in and of itself, indicate great sound. I’ve heard superdetailed integrated amplifiers that tended to spotlight certain aspects of the music in a way that was too analytical for my taste. The 700i wasn’t analytical; it was highly revealing, but it managed to communicate music as a coherent whole, to create a very engaging sound that demanded my attention.

“That clarity was a result of the 700i’s vanishingly low noise floor -- I’ve never heard an integrated amplifier as quiet as this one. Well-recorded music appeared against an ink-black background that helped create a more intimate listening experience.” 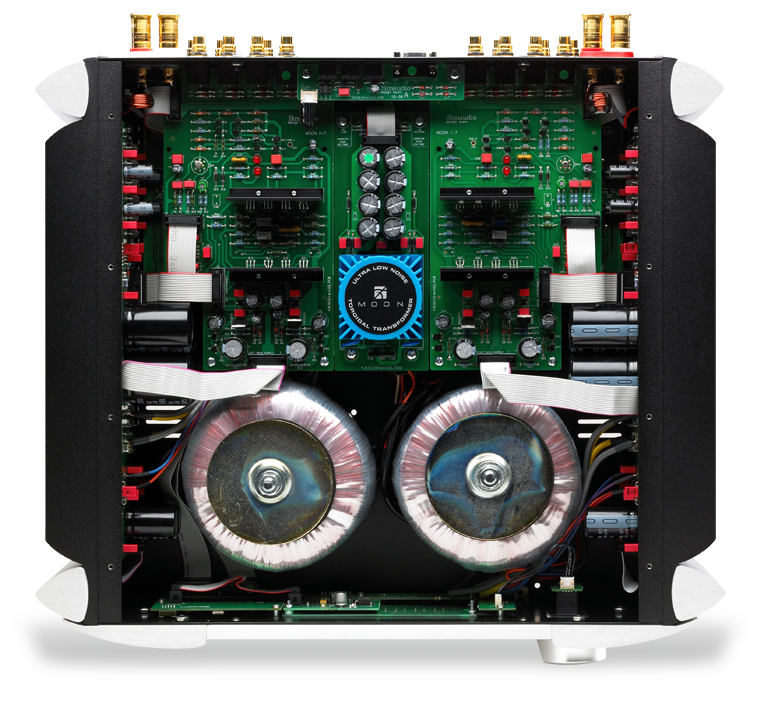 Two other areas where Philip thought the 700i stood tall were neutrality and power: “The Simaudio Moon Evolution 700i had no sonic character of its own. When I played a recording of lower quality, it conveyed that lower quality rather than imprinting the music with its own sonic signature. The 700i was the proverbial chameleon, taking on the character of whatever music I played through it. If you want to hear your music without electronic editorializing, the 700i does that.

“Another hallmark of the 700i’s sound was a sense of effortless power. I think it could be used to drive with ease almost any pair of speakers on the market, and in all but the largest listening rooms at all but the most obscene volumes. It sounded as muscular as its imposing size suggests.”

The Moon Evolution 700i is only the second integrated amplifier to be included in our list of Recommended Reference Components -- the first was Devialet’s D-Premier -- but we’re confident that it deserves to be included with the outstanding components already listed here. Said Philip, “The integrated amplifier used to be viewed -- and sometimes still is -- as a compromise suitable only for those who either can’t afford or don’t want to own separates. But the Moon Evolution 700i dispels the myth that an integrated amplifier automatically means concessions in sound quality. The 700i sits at the top of the price/performance curve, asymptotically approaching the point where spending significantly more will yield a sound that is merely different, not better. . . . The Simaudio Moon Evolution 700i is a statement product in every sense of the term.”