A true universal optical-disc player -- one that plays every relevant format -- is difficult to find. Even harder is finding one whose performance satisfies discerning audio- and videophiles. But that’s what Oppo Digital, of Mountain View, California, has provided in their BDP-105 player, which Roger Kanno reviewed in June for SoundStage! Xperience. It sells for only $1199 -- a steal, considering its build quality, features, and performance.

Advertised as a 2D/3D Blu-ray player, the BDP-105 also plays every other popular disc format -- CD, DVD-V, even DVD-A and SACD, the last being particularly important to many audiophiles -- and has numerous audio and video digital inputs and outputs. The digital inputs, which include coax, optical, asynchronous USB, and even HDMI, mean that the BDP-105 can be used not only as a player but also as a DAC. It can connect to a network wirelessly or via Ethernet, and can stream content from online providers such as Netflix and Vudu. In addition, its onboard digital volume control allows the BDP-105 to act as a preamp. Balanced and single-ended analog outputs are provided for stereo, while single-ended outputs are provided for 7.1-channel playback. There’s even a headphone amp. Overall, so many features and functions are packed into the BDP-105 that Roger had this to say: “To say that the BDP-105 is a universal Blu-ray player doesn’t begin to describe its flexibility as a source component.”

On the digital-audio side, the BDP-105 uses two ESS Technology Sabre ES9018 DAC chips, about which Roger wrote: “One is used for the multichannel output and the other for the stereo outputs, including stacking two sets of DAC channels for the headphone output. According to Jason Liao, Oppo’s CTO and VP of product development, the ESS chip-design team provided suggestions and improved the BDP-105’s analog output stage.” Careful attention was also paid to the video circuitry: “[The BDP-105] utilizes Oppo’s two-stage video processing, which incorporates MediaTek’s dual-core decoder running custom firmware, and Marvell’s Kyoto-G2H video processor with their latest Qdeo technology. New video-processing features include upscaling to 4K and 2D-to-3D conversion.” 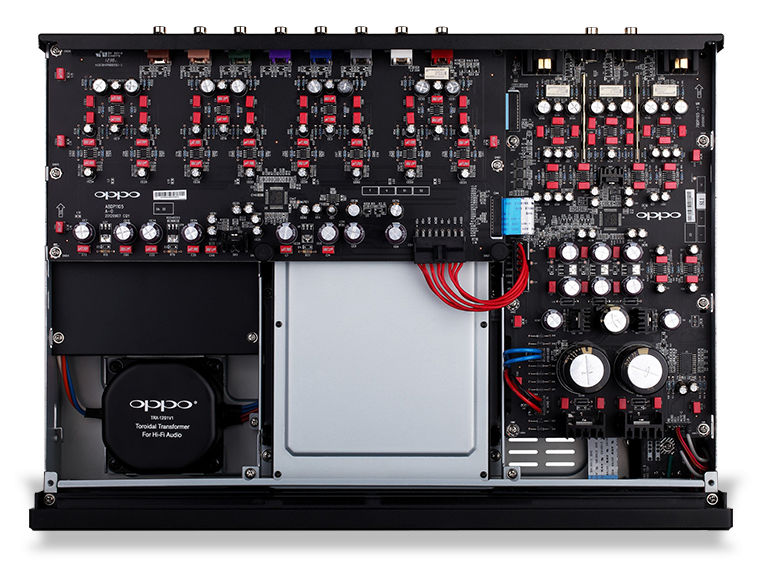 Finally, Roger was as impressed by the BDP-105’s overall build quality as he was by its technology and features: “The BDP-105 is stoutly constructed and weighs 17.3 pounds. The 16.8”W x 12.2”D x 4.8”H case contains a sizable toroidal power supply and is fronted by a heavy-duty, aluminum faceplate. Owners of earlier Oppo models will be familiar with the backlit remote control, which has been slightly reworked to add large Netflix and Vudu buttons. Considering the BDP-105’s sturdy construction, state-of-the-art audio and video processing, media-server capabilities, and ability to be used as a video processor and as an audio DAC and preamp, Oppo has once again raised the bar for what can be expected in an affordable high-end Blu-ray player.”

Roger described the BDP-105’s video performance as “spectacular” and “outstanding” with topflight source material, and still very good with less-than-optimal material: “With compressed video files with resolutions of only 1080i or 720p, the BDP-105 still produced a smooth and acceptable picture, even on my 56” 1080p RPTV.”

As for the Oppo’s sound, he had this to say: “High-resolution audio discs sounded impeccable. Dire Straits’ Brothers in Arms (SACD, Universal) had excellent pace and exhibited a pure, easygoing rhythm in ‘So Far Away.’ Each masterfully crafted riff from Mark Knopfler’s guitar was tremendously detailed, and the saxophone in ‘Your Latest Trick’ was intoxicatingly smooth. While Dire Straits showed off the BDP-105’s ability to reproduce cool jazz riffs, Seal’s Best 1991-2004 (DVD-A, Warner) certainly had bite. Bass was tight in ‘Killer,’ with concise percussive effects originating from all five channels. The harmony vocals in ‘Kiss from a Rose’ were sublimely clean, as was the distinctive sound of a sparkling oboe. ‘Don’t Cry’ and ‘Love’s Divine’ demonstrated the BDP-105’s ability to place Seal’s voice precisely within a complex arrangement, with an overall level of transparency that was exceptional considering that this is a multichannel A/V player that sells for not much more than $1000.”

Truly universal players that will satisfy audio- and videophiles are rare, and Oppo Digital’s BDP-105 is the best we’ve found. That’s why it received a Reviewers’ Choice award when Roger Kanno reviewed it, and why, this month, we recognize it as a Recommended Reference Component.