When I first unboxed Paradigm’s Premier 100B loudspeakers, I was a little disappointed. I still had Paradigm’s Monitor Atom SEs, which I’d written about in the very first edition of this column, in September 2018. Although the Premier 100B’s front baffle looks markedly different from the Atom’s, their sizes, weights, and textured-black finishes seemed pretty much the same. The 100B measures 11.125”H x 6.625”W x 9.125”D and weighs 12.9 pounds, while the Atom is 12.75”H × 7.125”W × 11”D and weighs 12 pounds. Both speakers also come in gloss-white finishes, but only the 100B comes in vinyl veneer, in a faux-wood finish they call Espresso Grain. The build quality also seemed comparable -- not a criticism of the 100B ($798 USD/pair), because it’s very good, but very high praise for the Atom, given its low price of $298/pair. But while each speaker has a 1” aluminum-dome tweeter and a 5.5” midrange-woofer, both in similar positions on their baffles, those drivers aren’t identical -- as I learned from Oleg Bogdanov, Paradigm’s director of engineering. Nonetheless, in many ways these speakers look very similar.

These similarities posed a problem for me because of these models’ big difference in price: $500. That seems a big difference, particularly for two models from the same company. Unboxing the 100Bs, I expected something more for more than twice the price. Looking at both models, I wondered: How different can they sound?

But the last thing you want to do is judge a hi-fi product by its looks. After unboxing the Premier 100Bs, I rushed to set them up, placing them atop the same IsoAcoustics Orea Indigo footers that I’d used under the Atoms. The Orea Indigos cost $59.99 each; I used three per speaker, for a total cost of $359.94. They do a remarkable job of blocking the transfer of vibrations from the speakers to the shelf they sit on, not only improving the speakers’ sound but keeping those resonances from contaminating signals from the U-Turn Audio Orbit Plus turntable ($289) that sits on the same shelf -- not optimal component positioning, I admit, but I do it because that’s what many people do. I hooked up the speakers to the NAD D 3045 integrated amplifier-DAC ($699) I’ve been using for the last few months, using the same AudioQuest Q2 speaker cables ($179/10’ pair) that have been in place since I began writing this column. 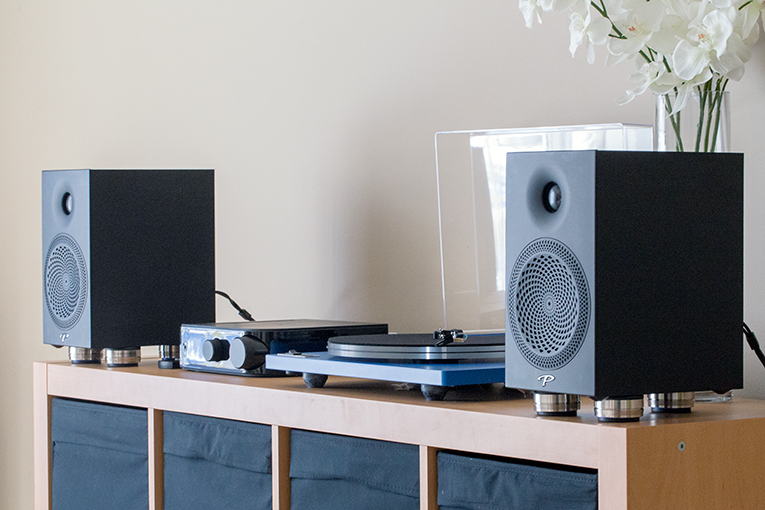 Everything connected, I picked up my Samsung S8 smartphone, opened the Tidal app, and, by way of a Chromecast Audio streamer connected via TosLink to one of the D 3045’s digital inputs, wirelessly streamed “Los Ageless,” from St. Vincent’s MassEducation (16-bit/44.1kHz FLAC, Loma Vista/Tidal). What I heard left me slack-jawed, and now I had a different problem: The 100Bs sounded so unlike the Atoms that I had trouble reconciling what I’d just heard with their many visible similarities and the fact that they’re both made by the same company.

The most noticeable differences were at the frequency extremes. Surprisingly, the 100Bs’ bass didn’t go as deep as the Atoms’, by a good 10Hz or so in this system. Talk about counterintuitive. Even Paradigm’s own specifications show the Atom going down to 45Hz (DIN), and the 100B down to 50Hz (DIN). DIN stands for Deutsches Institut für Normung (German Institute for Standardization). This spec basically refers to usable low-frequency output in a typical listening room. When I first wrote about the Atoms, I noted that they went down to about 50Hz in my room, which is what Hans Wetzel reported hearing in his room when he reviewed them for SoundStage! Access last October. The much more expensive 100Bs went down to only about 60Hz.

But while the Atoms had greater bass extension, the 100Bs’ bass was much tighter and more forceful, which gave the impression of greater bass power. They walloped more. Within the bass range, the 100Bs could also play considerably louder than the Atoms. As a result, when I streamed “Hollywood Nights,” from Bob Seger’s Stranger in Town (16/44.1 FLAC, Capitol/Tidal), the sound of the drumming -- in this complex rhythm track, two drum performances were overlaid -- had far more impact through the 100Bs than through the Atoms. The 100Bs could really rock; the Atoms, in comparison, were a bit sluggish. 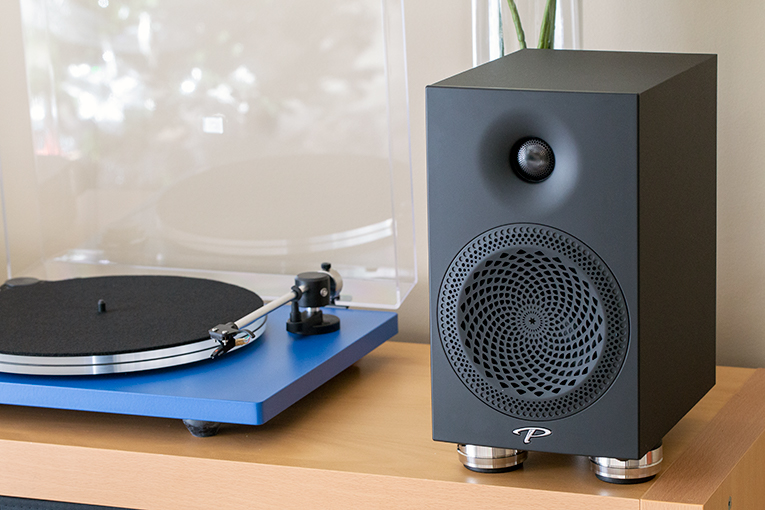 Speaking of powerful drumming, I also played Bradley Cooper’s hard-rocking, kick-drum-driven “Black Eyes,” from the soundtrack to A Star Is Born (2018), which he directed, and starred and sings in (16/44.1kHz FLAC, Interscope/Tidal). I know this remake was wildly popular, but was I the only one who almost fell asleep during it? For me, the tragic final act didn’t come fast enough, and when it did, I cheered -- at last, I could leave. But I gave the soundtrack album a try, and I’m glad I did. It sounds very good throughout, and appropriately “live” when a song, such as “Black Eyes,” is supposed to be performed in concert. The Premier 100Bs were able to hammer home this ballsy stadium rocker with surprising authority, and with such a big, open sound that they made the little Atoms sound as if they were tripping over their feet trying to keep up -- even as the Atoms proved, once again, that they go deeper in the bass.

Why such a difference in the bass? I’m not really sure, but the two speakers’ midrange-woofers are very different. The Atom’s has a cone of mineral-filled polypropylene and an inverted surround, while the 100B’s has a carbon-infused polypropylene cone and Paradigm’s Active Ridge Technology (ART) surround, which they say makes possible greater excursion with less distortion. In front of the 100B’s midrange-woofer is another Paradigm technology the Atom lacks: a Perforated Phase-aligning Lens (PPL). (The tweeters of both Paradigm models have PPLs.) I imagine these drivers’ frames and motor systems are also very different. Did all that cause the differences I heard? Or is there also something vastly different in these speakers’ crossovers? I don’t know -- I can tell you only what I heard.

In the treble, the Atoms are a little polite -- not recessed, but no one would ever call them bright. For the highly processed pop with elevated highs that many buyers will play through them, that’s actually a good thing -- the Atoms don’t shriek, even when music fairly begs them to. Nor would I call what I heard from the Premier 100Bs bright, though their sound tended that way -- their treble was much more prominent than the Atoms’. Yet the 100Bs’ ultraclean reproduction kept their overall sound comfortable to my ears. I call this sort of sound “lively” -- it’s not unlike what you hear from a Focal or current Bowers & Wilkins speaker. But could the 100Bs make some songs sound a little too trebly? At times -- the Latin mixes my wife finds on Tidal were a bit too piercing -- but only by a bit. Most of the time, the 100Bs’ elevated highs let these speakers sound more open and spacious. 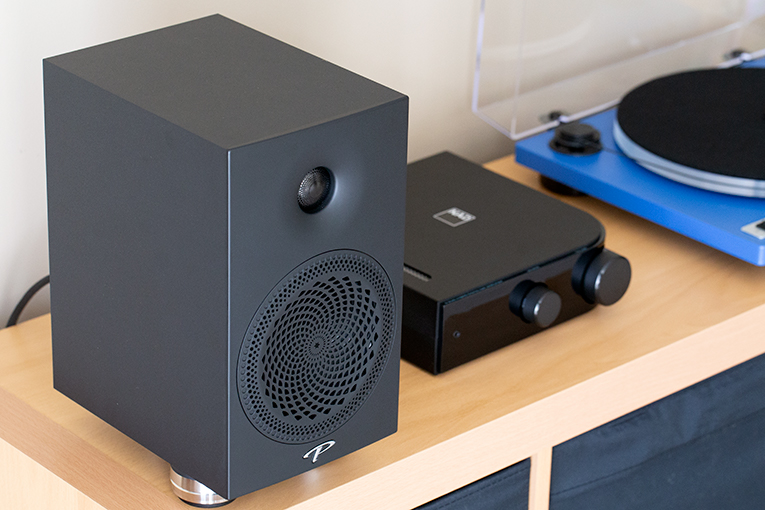 St. Vincent’s “Los Ageless” helped me realize that the 100B differed from the Atom in the midband as well. Through the 100Bs, her voice was more forward and focused than through the Atoms, and her vocal inflections were more obvious. Her voice also “popped” more from the mix. Male voices, such as Bob Seger’s, also sounded more immediate through the 100Bs, but unlike with the Atoms, they were no more prominent. That led me to believe that the 100B doesn’t accentuate frequencies in the range of male voices as much as it does those higher in frequency.

The Monitor SE Atom and the Premier 100B may look similar; but listen to both and you’ll know just how different they are.

When I first unboxed the Paradigm Premier 100Bs, I thought I’d write them up for this column and that would be that. Instead, I was so surprised and intrigued by their sound that I forwarded the pair to our newest and most prolific SoundStage! Network writer, Diego Estan, and asked that he write a full report on them, to be accompanied by measurements of them taken in the anechoic chamber of Canada’s National Research Council. That review, to be published on SoundStage! Access in the next few months, will include comparisons of the Premier 100Bs with two pairs of Bowers & Wilkins speakers that Diego owns -- fitting, I think, given the quality of sound they delivered in my “System One” setup.