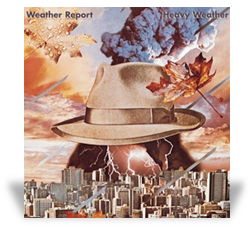 One of the things that struck me as I read the credits on the hefty gatefold of Original Recordings Group’s two-record reissue of Weather Report’s Heavy Weather (ORG 113) was the listing of electronic keyboards Joe Zawinul played on the recording. The ARP 2600 and Oberheim polyphonic synthesizer were very popular among progressive rock and jazz-fusion musicians of the 1970s, and in the wrong hands they often sounded cheesy and made recordings seem dated. To be honest, some of Weather Report’s tunes haven’t traveled well because some of the keyboard sounds place them too firmly in time. But it’s striking how well and how soulfully Zawinul used what was then new technology to create music for Weather Report that has held up remarkably well.

The irony is that a European would end up being one of the two musicians -- Herbie Hancock was the other -- who helped what could be ungainly electronics sound funky. By the time Zawinul started Weather Report, he’d already had a strong influence on American jazz. He had played on quite a few Cannonball Adderley recordings in the '60s and had written "Mercy, Mercy, Mercy," the saxophonist’s biggest hit. He also made key contributions as a player and composer to two important Miles Davis LPs that led to the fusion boom in the '70s: In a Silent Way (1969) and Bitches Brew (1970).

Wayne Shorter also played on those Davis albums. He had played with Zawinul in Maynard Ferguson’s group, one of the first jobs Zawinul had after leaving Berklee College of Music in 1959. Zawinul and Shorter, along with bassist Miroslav Vitouš, formed Weather Report in 1971. The band’s debut, Weather Report (1971), showed the influence of the recent Davis recordings. The music was free-form, with the distorted keyboards, heavy bass, polyrhythms, and strong funk undercurrent that Davis had used to such bracing effect. I Sing the Body Electric (1972) still leaned toward free improvisation, but with Sweetnighter (1973) Weather Report moved closer to a solid groove.

Zawinul and Shorter remained the constants in a band that changed personnel often and continued to evolve with each album. By the time Jaco Pastorius became the band’s bassist, replacing Alphonso Johnson, Weather Report had begun to show the influence of music from other cultures, especially Africa and Latin America. Heavy Weather (1977), the band’s seventh LP, was Pastorius’s second recording with them, and his influence on it was decisive. Pastorius had played in rhythm-and-blues bands in his youth in Florida, and Heavy Weather is bouncier and more likely to get people out on the dance floor than its predecessors. He provides the melodic line to the album’s hit, "Birdland," and this Original Recordings Group pressing, mastered by Bernie Grundman, underlines how integral Pastorius became to the overall sound and impact of the group.

RTI pressed this ORG release of Heavy Weather on two 45rpm 180g records. In contrast to the 1997 CD, Pastorius’s bass on "Birdland" has more punch and sounds more vibrant -- there’s more air around it and around other details in the song, too, such as the acoustic piano that pops in here and there. After hearing this LP, Alex Acuña’s high-hat cymbals sound too insistent on the CD, and Shorter’s sax sounds too brittle. While I was generally pleased with how good my original pressing of the LP sounded (during the '70s, Columbia pressed quieter vinyl than most of its competitors in the US), the soundstage on the ORG pressing is more spacious. I could hear the echo around Zawinul’s ARP during the opening of "Birdland" more fully, and other details, such as Pastorius’s wordless vocals near the end of the song, were clearer and more distinct.

Zawinul’s beautiful ballad "A Remark You Made" is a good place to hear how well Grundman mastered this LP. Pastorius’s bass has more growl and fullness than on the original LP, and Zawinul’s lower-register keyboards are especially vibrant. Acuña’s snare drum rings out more sharply and the cymbals sustain longer than on the original LP. The keyboard lines that close the song, separated in the left and right channels, are much more textured on this pressing, and it’s easier to hear the timbre of Shorter’s tenor saxophone. The CD version is brighter and closer, with a significant loss of subtlety over the two LP versions.

Acuña’s snare and kick drum on "Teen Town" have so much more immediacy and slam on this pressing than they do on the original, and Pastorius’s bass lines carry more audacity and punk arrogance. Shorter and Zawinul are multitracked on the right channel at a couple of points, and you can hear them more distinctly on Grundman’s remaster. Small details began to jump out as I listened more closely to this pressing. Zawinul’s keyboard clicks on Shorter’s "Harlequin" ring out more sharply, and Shorter’s soprano sax is warmer, giving a greater sense of how the instrument sounds.

"Rumba Mama," a live track co-composed by Acuña and percussionist Manolo Badrena, who appears on all but two tracks, is a demo-quality track on the new pressing. The applause that opens the tune fills the room and puts you in the middle of the crowd. The percussion is more fleshed out and resonant than on the original LP, and on the CD it’s just loud and explosive. The conga drums in the left channel are much more separated and focused than on the original LP, and they’re more audible than on the CD, where they’re overwhelmed by everything else going on in the track.

Subtle details in every track are easier to hear on Grundman’s remaster, but they don’t push themselves forward. Badrena’s congas on "Palladium," Acuña’s snare rolls on "The Juggler," and the distinct tones of Zawinul’s keyboards and their layering on multitracked passages are all precisely placed in the soundstage and easier to hear because they have enough space to breathe. Above all, you can now more easily hear what a central role Pastorius’s bass played in this stage of Weather Report’s history.

As with all Original Recordings Group LPs, the cover is heavy cardboard and just a bit larger than standard cover size to prevent splitting during shipping. The inner sleeves are made of a sturdy anti-static material, and the two records are 180g each and quiet. The opening groove on my copy had some crackling, so I cleaned the record with Audio Intelligent’s Enzymatic Formula, which eliminated the noise and significantly opened up the sound of the record. I find that any new LP benefits from a good cleaning in order to completely appreciate its sound quality.

Heavy Weather is probably Weather Report’s most commercial record, and it consequently sold more than half a million copies. It’s a smart record, well played and intelligently arranged. It transcends its '70s fusion trappings and, despite its accessibility, stands with the band’s best work. This pressing let’s you revel in its glories. 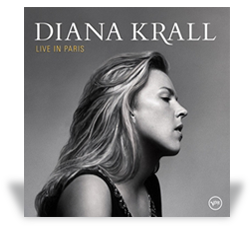 When I reviewed Original Recordings Group’s two-LP, 33rpm reissue of Diana Krall’s Live in Paris (ORG 003), I noted that it had "more space and live ambiance than the excellently mastered CD." I expected the 45rpm version to sound pretty much the same, but it’s worth considering over the other pressing. (Somewhat confusingly, ORG has assigned it the same catalog number as the 33rpm.) The dead wax on each of the 45rpm records is narrower than on the 33rpm, which would suggest wider playing grooves. I’ve read enough about 33 vs. 45rpm to cause my eyes to glaze over and my head to loll, but in this case I’m giving a slight edge to the 45rpm version of Live in Paris. There’s an ever so slightly better sense of the space the music was played in, Krall’s voice is a tiny bit more focused, and the standup bass is rounder and more defined. The effect is something like moving a couple of rows closer to the stage. ORG’s 33rpm version is so good that you shouldn’t be in a rush to replace it with this one. If, however, you’re deciding between the two, go for the 45.