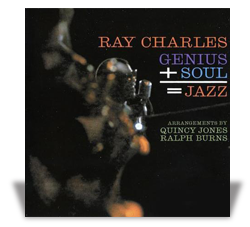 While Ray Charles’s catalog, like those of many other musicians, is plagued by a seemingly endless number of anthologies and best-of compilations, a surprising number of original titles remain available, some in excellently remastered reissues on LP and SACD. Here I evaluate three reissues on SACD/CD: of The Genius Sings the Blues, from 1961 (Atlantic/Mobile Fidelity Sound Lab UDSACD 2049); of Genius + Soul = Jazz, also from 1961 (Impulse!/Analogue Productions CAPP 2 SA); and Live in Concert, from 1965 (ABC Paramount/Analogue Productions CAPP 500 SA). All three are also available on 180gm vinyl from their respective reissue labels.

Charles had already been recording for a few years when, in 1952, he signed with Atlantic Records. He spent a lot of time in the studio for them over the next seven years, recording in a variety of styles and settings, but it was his gospel-influenced rhythm-and-blues recordings that secured his reputation and made him a star. Though Charles signed with ABC Paramount Records in 1959, Atlantic had enough tracks still in its vaults to continue issuing albums of new material. Several of the 12 tracks of The Genius Sings the Blues date from one of Charles’s earliest sessions for Atlantic, in 1953.

Louis Jordan had recorded “Early in the Mornin’” for Decca, and Charles, a great admirer of Jordan’s, recorded it for Atlantic in 1958. The Birth of Soul is well mastered overall, but “Early in the Mornin’” is from a stereo master and sounds dull, with individual instruments smeared together and Charles’s voice sounding fuzzy at the edges. The mono master used for Pure Genius jumps out of the speakers, but the MoFi SACD, which is all mono, presents a more convincing sense that the music is taking place within four walls. Ray’s voice is set off better from the backing singers and the band, Mongo Santamaria’s congas have more ping, and David “Fathead” Newman’s tenor-sax solo is less biting on the MoFi master. 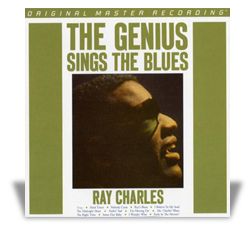 Ahmet Ertegun and Jerry Wexler produced several sessions for Charles in New Orleans in 1953, and five tracks from those dates appear on The Genius Sings the Blues. The mono masters used for The Birth of Soul, including “Feelin’ Sad” and “ I Wonder Who,” sound more like first-generation sources than does “Early in the Mornin’” on that set. The same songs on Pure Genius sound hotter and, on casual hearing, more detailed than they do on The Birth of Soul. Yet after comparing Pure Genius to the same recordings on the MoFi disc, I found that the leading edges of cymbals and Charles’s voice in Pure Genius had an occasional brittleness that the MoFi controlled, while still giving the recordings a feeling of depth and sonic clarity that the higher resolution of SACD makes possible.

The MoFi SACD also brings focus to individual instruments and a better picture of the recording spaces than the two CD sets. While I continue to find Ted Jensen’s mastering of The Birth of Soul and Dan Hersch’s and Bill Inglot’s work on Pure Genius to be very enjoyable, Shawn R. Britton’s mastering of this MoFi reissue of The Genius Sings the Blues has the analog warmth of the earlier box, but in much higher resolution, and without the later set’s occasional harshness.

Mobile Fidelity will soon release an SACD of a 1959 Atlantic release, The Genius of Ray Charles, which features arrangements by Quincy Jones and Ralph Burns. Charles brought the two arrangers back to work with him the following year for an Impulse! Records release, Genius + Soul = Jazz. Kevin Gray’s remastering for Analogue Productions’ two-channel SACD/CD is my third digital copy of this very enjoyable recording. Two years ago I reviewed Concord Records’ reissue, which included three additional LPs from Charles’s stint with ABC Paramount. I compared the mastering on that set to a DCC reissue from 1988 by Steve Hoffman. I also have a pressing of the mono LP.

Paul Blakemore’s mastering of Genius + Soul for the Concord set conveys the excitement of these sessions, in which Charles was backed by what was essentially the Count Basie Orchestra. The CD is a bracing listen -- the drums sound especially explosive in spots. I still find Steve Hoffman’s mastering for the DCC CD to be less compressed and more musical overall. Gray’s mastering on the AP SACD has the same warm, musical qualities as the DCC disc, but with more fidelity to the timbres of individual instruments, and a better sense of the placement and size of the sections of the orchestra.

Charles sings on two tracks on this otherwise instrumental disc, “I’ve Got News for You” and “I’m Gonna Move to the Outskirts of Town.” His voice is a little aggressive on the Concord, but sounds effortless on the AP and DCC. All three discs have some peak distortion, probably attributable to the age of the original tapes, but Gray seems to have made some effort to limit this while not losing the recording’s essential drive.

All three discs have things to recommend them. Rudy Van Gelder recorded the original sessions, and on the Concord disc Blakemore doesn’t violate Van Gelder’s intentions -- he often favored a hot master. Hoffman’s DCC master flows naturally and easily, while Gray’s has the clarity and detail of the higher-resolution format. On the AP SACD the orchestral arrangements build naturally, the sections of the orchestra flow easily, and solos are better defined but not too forward. Of the three digital versions, the AP SACD is to me the most enjoyable overall, and the closest to the mono LP in conveying the music with ease. 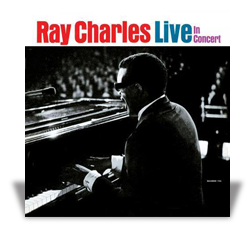 Live in Concert was Charles’s third live album, and his 11th release for ABC Paramount. Concord added seven tracks for an expanded CD reissue in 2011, but my listening impressions are based on a comparison of AP’s SACD/CD and an original pressing of the stereo LP. Kevin Gray and Zan Zanev mastered the disc, and it’s a musical, analog-sounding set that’s a pleasure to listen to.

Charles’s voice is lean and centered on the AP disc, and there are moments when Gray and Zanev clear some space to give a slight emphasis on SACD to details that are buried on the LP, such as the guitar in “Makin’ Whoopee.” On the other hand, the LP has more attack in the bass, and a better picture of the scale of the audience in Shrine Civic Auditorium, where Wally Heider recorded the show in December 1964.

At times, I found the finger snaps in “Margie” easier to hear on LP, with a more ringing tone; in other listening sessions, I liked the way the SACD integrated them into the overall sound. I preferred some things outright on the LP, such as the better-defined bowed-bass lines that close “You Don’t Know Me,” and the sound of the drums throughout. On the LP, the tambourines in “Hallelujah I Love Her So” shimmer more, and the hand claps have more body -- but again, at times I found them to be more naturally a part of the music on the SACD.

After careful listening to the mastering of Live in Concert on the original LP and this new SACD/CD, I think Gray and Zanev present a more accurate picture of how the show was originally recorded, while the mastering engineer for the LP added some occasional emphasis to make the record more exciting. If pressed, I suppose I’d choose the LP for its old “hi-fi ambiance,” but only by a narrow margin. The AP SACD is doubtless a more faithful rendering of a live Ray Charles recording when his voice was strong, and his piano playing is some of his best on record.

All the releases reviewed here reprint the original liner notes rather than retrospective insights, so you’ll have to search the Web to find out who played on Live in Concert, or to chase down the recording dates for The Genius Sings the Blues. The latter is nicely housed in a miniature gatefold LP sleeve slightly larger than a standard CD jewel case. Analogue Productions uses the super jewel box that’s standard for SACDs. All three SACD releases whet my appetite for more Ray Charles in high resolution.