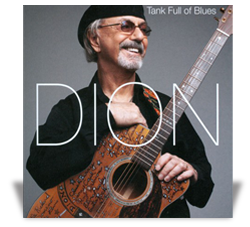 At 72, Dion DiMucci, known to rock’n’roll fans simply as Dion, could be playing Vegas or Branson, grinding out old hits and collecting a nice paycheck. Instead, he’s on his fourth or fifth creative wind, which began in 2005 with Bronx in Blue, a collection of blues and country standards that were his inspiration as a young musician. He continued his blues streak in 2007 with Son of Skip James, and in 2008 paid tribute to some of the musicians he came up with in Heroes: Giants of Early Guitar Rock.

In an interview in 2010 for a Rock and Roll Hall of Fame documentary, rock critic Dave Marsh told Dion that he was the only artist from rock’s first generation who was still relevant. The singer certainly continues to challenge himself and his fans with music that is fresh but deeply rooted in American musical history. Tank Full of Blues, Dion’s newest disc, makes his foray into blues a trilogy, and is released on the reactivated Blue Horizon Records, the legendary British blues label that was home to Fleetwood Mac, Chicken Shack, and later recordings by a number of American blues acts, including Otis Spann.

Most of the songs are Dion’s, and celebrate his love of the blues in largely acoustic settings. They also continue to show his mastery of the guitar. Longtime fans weren’t surprised to discover that DiMucci is a fine player. As Marsh pointed out in the liner notes to Heroes, "The truth is, Dion played guitar on every record he ever made." As a lead singer and teen heartthrob, Dion wasn’t usually photographed playing, but he was there on "Teenager in Love" and "Ruby Baby."

Dion’s acoustic guitar playing was a key element of his 1968 hit, "Abraham, Martin and John," as well as his underrated singer-songwriter albums for Warner Bros. in the 1970s. His guitar is even more prominent in his latest records, especially here, where he’s the sole guitarist. He multitracked his rhythm and lead guitars, mixing skillfully played acoustic chords and distorted, driven electric and acoustic lead lines. Though clearly a facile guitarist, Dion plays with conviction rather than flash, always underscoring the meaning of the words. His straightforward leads on Tank Full of Blues are infused with the swamp funk of players like Tony Joe White and the simple effectiveness of Hubert Sumlin. Dion adds a touch of bass here and there, and drummer Robert Guertin fills things out.

As impressive as Dion’s guitar playing is, it’s his singing that brings you back to his blues performances. Age has brought a slightly darker hue to his voice without taking anything away from his upper range. He sings with emotion, but doesn’t push too hard or pretend he grew up in the Delta. "I got a tank full of blues," he sings in the opening track, and there’s just enough growl to let you know he means it. He plays familiar, uncluttered blues riffs behind his voice, and they don’t feel worn out; as many times as they’ve been played, they’re still the essence of American music.

When Dion signed with Columbia Records in 1963, John Hammond Sr. was a producer there, and invited the singer into his office to listen to blues recordings, including those by Robert Johnson. Hammond was instrumental in reissuing Johnson’s records, sparking a blues revival in the early ’60s. Here, Dion’s "Two Train Medley" comprises Muddy Waters’ "Still a Fool" and Johnson’s "Ramblin’ On My Mind." But it’s Dion’s own "Ride’s Blues (For Robert Johnson)" that captures not only his love of Johnson’s music, but the essence of the man himself. "They say he died for nothing, you know, they dumped him in a hole," Dion sings of Johnson’s contemporaries, then adds a few ideas of his own:

To Dion, Johnson was a sinner who acknowledged the profane, never celebrating it but warning against it, and in the end was saved. Dion’s voice carries the conviction that Johnson’s message is holy, while Dion’s guitar playing, raucous and dirty, puts Johnson and Dion in this world, on firm ground. The song says more about Johnson’s music and its effect on the listener than any number of scholarly essays.

Like all blues tunes, Dion’s are about life and love, mistakes made and lessons learned, and the search for truth. And, as with the best of the blues, the message is contained more in the way the words are sung than in their content. One exception, "Bronx Poem," is talking blues, almost a rap, in which Dion spells out his faith in music and God (after years in various Protestant denominations, he returned to the Roman Catholic Church, in which he was raised). At heart, he’s a gospel blues singer, even in tunes that carry no overt religious message. He never gets heavy-handed about his faith, even in "Bronx Poem," and his sense of humor remains intact in the very amusing "I Read It (in the Rolling Stone)," where he pays tribute to the magazine for covering music, at the same time suggesting that even that venerable bible of all that’s hip has trouble staying abreast of things.

Tank Full of Blues demonstrates Dion’s abilities in country blues ("My Baby’s Cryin’"), uptown, rock-inflected blues ("My Michelle"), and dirty swamp funk ("Ride’s Blues"). He never fails to surprise, whether demonstrating how completely he’s mastered the Chess Records style in "Two Train Medley," or singing confidently in a variety of styles. Robert Guertin engineered Tank Full of Blues, and it’s an intimate recording. You can hear tube amps buzzing and fingers sliding over steel strings. It’s a lot like going to hear Dion and his friends at a local bar.

The blues form has been around so long it might no longer surprise. What still amazes is how a singer like Dion, who understands its subtleties, can find new things in it, and bring back the excitement we felt when we first heard it.