Halloween Treats for the Ear

Through the years, Halloween has been a big music holiday for me, second only to Christmas celebrations. I read somewhere that the holiday is now the second largest celebration for decorations and greeting cards, so apparently everyone else has caught on.

I used to go all out. In addition to having music playing on the main audio system (vinyl in those days) I’d have two or three portable cassette players scattered throughout the house playing wolf howls and various other sound effects. I’d greet trick or treaters with glistening fake fangs and an Edwardian cape that a friend made for me when I was conducting the Washington Civic Symphony.

I don’t go all out like that any more. I was urban then and am now rural. The kids begging for candy drive downtown, where the houses are closer together and they can make a bigger haul with half the effort. Many of them don’t even wear costumes anymore. A lot has changed, but the music is still a big part of it for me, so let me share some of the best brand-new and tried-and-true releases with you. 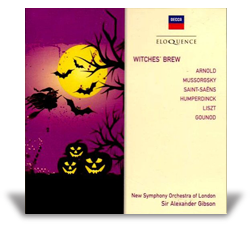 This recording, from 1959, is the granddaddy of all Halloween albums. It was first released on RCA, in Living Stereo, with a campy cover photo of a witch brewing something in a pot. It contained definitive interpretations of each composition. The New Symphony Orchestra of London wasn’t considered one of the best in London at the time, but Gibson has it playing like it’s the best orchestra in the world. Legendary recording engineer Kenneth Wilkerson has produced close-up, rich, and warm recordings that never become strident. Once people caught on, the album became a cult favorite, and it’s been reissued many times, most notably on Classic Records. If you’re looking for that disc, or one with the original cover, you’re going to pay a bundle, as they’re all out of print now. Decca Eloquence in Australia, however, has produced a new, budget-label copy that sounds just as good to me as the original, and as a bonus they’ve added the Gounod pieces, which weren’t on the original. The Mussorgsky A Night on the Bare Mountain is in the somewhat tamer, more familiar orchestration by Nikolai Rimsky-Korsakov. If you want the wild and woolly original, Naxos has an excellent recording with the National Symphony of Ukraine conducted by Theodore Kuchar that presents both versions, available on CD, SACD, and DVD-Audio (search Amazon.com to find the HD formats). 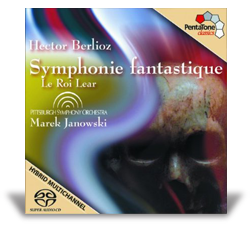 French composer Hector Berlioz was a visionary, and his symphony, which musically depicted a program he’d written out in text, revolutionized music. The young composer had fallen in love with English stage actress Harriet Smithson, whom he had seen in Hamlet. Since she didn’t seem impressed with him, he poured his heart out in the music, which follows the mishaps of a young man high on opium as he searches for his beloved. He finds her in odd places, in the fifth movement at a witches’ sabbath, where her theme becomes deliciously distorted and plays in counterpart to the Dies Irae. I initially thought German conductor Marek Janowski would be the wrong interpreter for this music, and I put off listening to this new recording for a month or so. Now I have to say that my presumption was absolutely wrong. Janowski has a wonderful feeling for this romantic score, and he captures its nuances and blazing boldness with equal measure. He has the Pittsburg players performing at their best, and the recording is rich, warm, and detailed, with just enough bounce in the rear channels to give the orchestra a sound very big on presence. The recording sounds fine in CD or SACD stereo, but it really blooms in multichannel sound. The overture receives a performance that’s perhaps even better than the symphony. Berlioz wrote an extra part for obbligato cornet that’s seldom used, but I find it virtually indispensible. Janowski doesn’t use it; for that you’ll need to turn to Paavo Jarvi and the Cincinnati Symphony on Telarc SACD, or Charles Mackerras and Jean Martinon on older, yet choice, CD recordings. 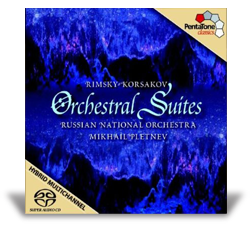 In the last two decades of the 19th century, Nicolai Rimsky-Korsakov was the leader of a group of Russian nationalist composers known as The Five. He was the only musician of the group who made his living from music alone. Modeste Mussorgsky was the group’s most unkempt member, a miserable alcoholic who died young. Korsakov sought to make Mussorgsky’s A Night on the Bare Mountain more presentable, cleaning up the harmonies and orchestration and, right or wrong, creating the version we’re most likely to hear these days. But Korsakov made his own trip to a witches’ sabbath. He had started the opera Mlada as a group effort, but when other members of his group didn’t cough up their parts, he completed it on his own. In the third act there’s a witches’ gathering at Mount Triglav that, after presenting some grisly Russian mythological monsters, conjures up Cleopatra! Korsakov orchestrated the complete act as the piece recorded on this SACD, Nuit sur le Mont Triglav. Since he was the man who smoothed out Mussorgsky, you wouldn’t expect his sabbath to be terribly wild, and indeed it isn’t. Only one section that has growling trombones and bass drum rolls sounds close to terrifying, but the overall work is full of voluptuous melodies orchestrated with the masterful skill that was the composer’s trademark. The performance on this new release is as good as you’re going to hear of this seldom-played work. Pletnev’s orchestra sounds splendid, and the recorded soundstage is both wide and deep with excellent presence. The other pieces on the disc are good finds, too. The "Dance of the Tumblers," the only section of the Snow Maiden Suite that’s often played, receives a rollicking, virtuoso treatment that really brings it to life. 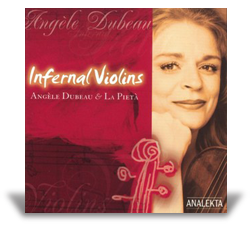 The musical instrument most closely associated with the devil is the violin, as shown in music ranging from Tartini’s "Devil’s Trill Sonata" from the baroque period to Stravinsky’s l’Histoire du Soldat of the 20th century. How naturally clever, then, that Canadian violinist Angèle Dubeau and La Pietà, her all-female chamber orchestra, would create an entire concert devoted to the devil’s fiddle playing and dancing. The small, virtuoso-quality orchestra comprises just 11 string players and piano, but they tackle some big music such as Camille Saint-Saëns' Danse Macabre, as well as excerpts from Manuel De Falla’s El Amor Brujo and Jacques Offenbach’s Orpheus in the Underworld. These are mixed in with older music, such as the aforementioned Tartini, and modern compositions, like the Rolling Stones’ "Paint it Black." All of the arrangements work and are played with such flair, joie de vivre, and controlled abandon that they’re impossible to dislike. Infernal Violins is a two-disc set, which includes a DVD that lists a few numbers from the live Infernal Violins concert, as well as some earlier concert and video footage. The sound is generally excellent, but the video varies. The Infernal Violins footage is A-plus, but some of the older videos are less focused and don’t have very rich color. That said, this is an appealing disc set that will put you in just the right celebratory mood for the holiday.