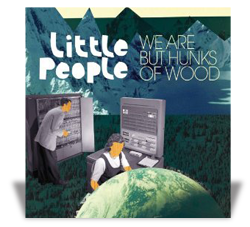 Here in the States, in the days and weeks since the General Election of 2012, I must admit that, as often as possible, I’ve been soaking up the sweet sounds of silence. I found this season’s election proselytizing to be especially exhausting, and was relieved when the votes were tallied. Now, as our elected officials attempt the elephantine task of negotiating tax hikes and budget cuts before year’s end, I prefer to turn up the volume on some good new music and tune out the rest of the mess.

Lately, I’ve been seeking out ambient music with more calming and reflective aspects. Maybe, like an animal who innately knows it’s time to rest, I’m just anticipating the hibernating hush of winter snow, but I’ve found myself drawn to music that fits this mood. English producer Laurent Clerc, known professionally as Little People, has just released a down-tempo electronic album, We Are But Hunks of Wood (CD, Youth & Progress Recordings), that has satisfied this recent craving. Named for something Jim Morrison once said -- “Without touch, we are but hunks of wood” -- the album is a blend of original instrumentation and sampling. While I sometimes find electronic music uncomfortably edgy, Little People’s sound makes it easier to appreciate the genre. The music follows a natural, playful pattern that is organic, soothing, and artfully crafted. On “Electrickery,” for example, slowly accumulating layers of violins, cello, analog synth, and click tracks swell into a futuristic, six-minute-long orchestral piece of striking beauty and simplicity. Grab a free MP3 download of the equally spacey “Aldgate Patterns” here. 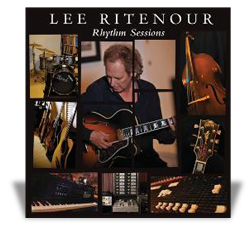 I’ve also been enjoying guitarist Lee Ritenour’s new Rhythm Sessions, released in September (Concord CRE-33709-02). Featuring an all-star cast of guest jazz musicians that includes George Duke, Marcus Miller, Stanley Clarke, Dave Weckl, Chick Corea, Vinnie Colaiuta, and Larry Goldings (to name a few), the album is a stellar display of virtuosity and musicianship. It also highlights the talent of some up-and-coming musicians between the ages of 19 and 30 -- entrants in Ritenour’s 2012 Guitar and Rhythm Competition who won the chance to collaborate with these established legends. They include keyboardist Hans de Wild (Holland), pianist Demetrius Nabors (Michigan), bassist Michael Feinberg (New York), and drummer Selim Munir (Turkey). Ritenour wrote half the songs on the disc, then selected choice covers for the remaining spots, including Nick Drake’s “River Man” and Agent Spark’s lyrical “Maybe Tomorrow.” Ranging from funky jazz to Latin and R&B, Rhythm Sessions is a cohesive album showcasing undeniable skill, and a warm introduction to some of the new guard by some of the old. 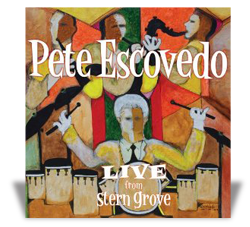 Finally, check out Pete Escovedo’s smokin’-hot Live from Stern Grove (Concord Picante CPI-34111ADV), currently available for digital download, with a CD edition coming in 2013. This summer, the master Latin percussionist led the celebration of the 75th anniversary of the Stern Grove Festival, a legendary San Francisco cultural institution that is also America’s oldest outdoor, admission-free performing-arts series. The Bay area is known for its Latin sounds, and Escovedo is joined by some heavy hitters, including Arturo Sandoval (trumpet), Dave Koz (saxophone), Ray Obiedo (guitar), and Escovedo’s daughter, Sheila E. (congas). The album has a contagiously high energy that makes me want to move, and the dynamic exchange between musicians and audience is palpable. A Latin take on “Fly Me to the Moon” is a crowd pleaser, as is the frenetic salsa number “Dance,” written by Escovedo and his kids, Juan, Peter, and Sheila. Live from Stern Grove is a fitting tribute to an iconic festival by an equally iconic artist.

All of these releases are welcome diversions from the daily static of talking heads and political posturing -- music to my ears in more ways than one. Happy holidays, and here’s hoping your 2012 ends on a sweet note!