At the recent hi-fi show in Paris, the first person I happened upon was Heinz Lichtenegger, locked in conversation with one of his dealers. Heinz is always animated and passionate about everything: opera, wine, turntables -- you name it. He didn’t become the world’s largest manufacturer of record decks by showing a lack of faith or enthusiasm. And it is this that had him steaming.

You need to know this about Heinz: he’s nearly always smiling, as in the photo here. This is a man who’s never bored, constantly travelling, utterly in love with life, and enjoying it to the fullest. This was the first time I’d seen him in such a dither, angry at something other than a screw-up in a restaurant, the latter of which is a sight to behold: there’s a waiter in Las Vegas still shaking from the dressing-down he received five years ago when he upended a 30-year-old Barolo into a carafe, thus ensuring that the sediment made it undrinkable. 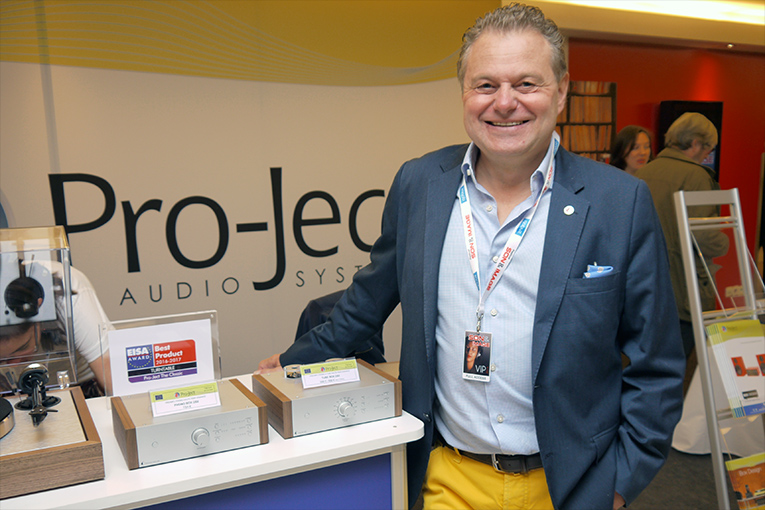 Aside from that moment of incandescence, Heinz was seething about what I can only call “analogue arrivistes.” Now let’s not be naïve: every time someone comes up with something new and commercially viable, the leeches slither out of the woodwork to cash in / jump on the bandwagon / rip off the idea / delete as applicable. That’s life, and there’s nothing to be gained by, say, the visionary Bo Christensen railing against those who copied his flat-layout Artora brand (though they should all send him a royalty).

But back to Heinz. His story and that of Pro-Ject are by now familiar. In 1991, which you’ll note means that this is Pro-Ject’s 25th anniversary, Heinz detected a need for affordable turntables for those who hadn’t forsaken vinyl. Although Linn, Rega, VPI, SME, Transrotor, Clearaudio, and dozens of others never stopped making turntables -- and should always be credited with such -- Heinz felt that there was nothing outside of the specialist/enthusiast area that could also serve the wider market.

In Heinz’s mind, with the exception of lingering production for the disc jockey-oriented designs from Technics, the big brands, especially the Japanese, not only abandoned analogue: they actively tried to crush it. Their touting of “Digital is perfect!” and other bullshit claims, aided in their dissemination by the “useful idiots” in the studio and computer worlds, mitigated against analogue’s survival. But survive it did, and those who know Heinz are aware that he is -- without question -- in the permanent Top 10 list of vinyl champions, alongside Michael Fremer, the guys at Mobile Fidelity, Michael Hobson, Chad Kassem, and others who would not let it die.

What so incensed Heinz -- and you can be churlish and cynical if you like, and simply write this off as his pique at stiff competition from mainly Japanese multinationals -- is the brazen re-entry into the turntable market by household names who, for 30-plus years, have been shitting on vinyl from a great height by shutting down pressing plants, stopping turntable production, etc. Notable, noble exceptions include Denon and Audio-Technica, who never stopped making cartridges, but Heinz has nothing but disgust for the rest.

“They are doing it all over again -- selling features instead of sound quality.” Heinz spits this out as one who knows all the minutiae of both turntable and digital manufacturing. Before even launching into an attack on their record decks, he argues the same for their digital efforts: he points out that his under-$800 DACs use the best chips one can find, employed properly, and sold without criminal mark-ups, while taking a dig at those charging $20,000 for D/A converters.

I’m then treated to a crash course in turntable construction. He compares models point by point, his “not only sound better, but they cost half as much!” Platter materials, the relative machining tolerances, plinth construction, wiring quality -- nothing escapes him. I don’t know what rankles more: the fact that these companies have returned, like a parent who abandoned his children only to pop up after they’ve become successful, or the inferiority of their products.

Heinz points to what he thinks will be his next bestseller, the Debut RecordMaster. By this stage, he’s already reminded me that Pro-Ject had delivered the first turntable-with-DAC for people who wanted to transfer their vinyl to their computers painlessly, like a decade ago. This has a name with a double meaning, both for record, as in vinyl records, and record, as in taping something. 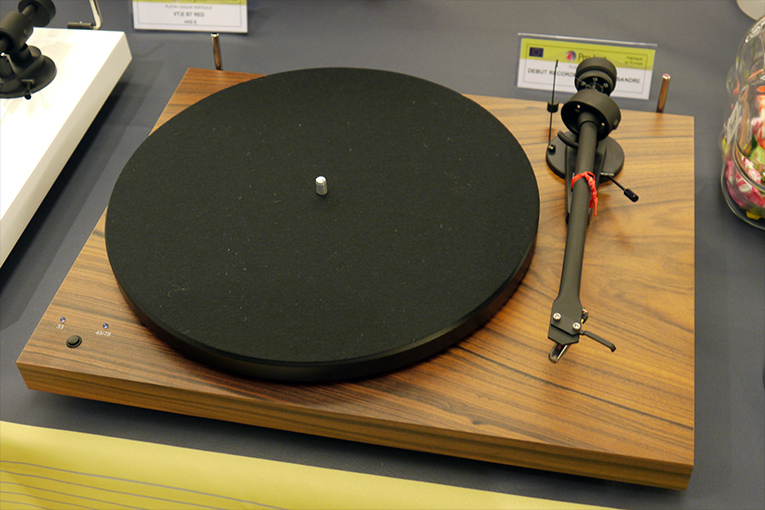 While no doubt the bulk will end up with hi-fi enthusiasts, Heinz wants this to be the harbinger of the next stage in the revival of the LP, seducing the unwary away from the sub-$100 plastic crud sold online, which probably does more damage to vinyl than one cares to observe. He’s priced this at $399 in black, white, or red gloss, or as seen here, with a real wood veneer in walnut and palisander for $449.

Heinz, too, can play at the features game, but without compromising quality. The RecordMaster plays 33, 45, and 78, and has a built-in high-quality phono stage and USB digital output (16-bit/44.1kHz). It comes standard “with a very good Ortofon cartridge. It sounds and records way better than any other USB turntable,” says Heinz, “especially because of its robust design and high-quality phono stage and cartridge. It makes NO sense when you record 24-bit and use an average cartridge and phono stage, because all you record is crap in 24-bit. This gives the far better result.”

But that’s not all: Heinz knows this will attract more ambitious recording enthusiasts, so he’s producing the Debut RecordMaster HiRes with “carbon-fibre arm, acrylic platter, premium 2M Red Ortofon cartridge, an even better phono stage, and most-importantly, a 24-bit/192kHz PCM resolution and DSD-capable USB digital output.” Heinz says this will retail for $699 in black, white, or red gloss, with a real wood veneer in walnut and palisander for $749.

This unit’s secret weapon, though, is a level control “to balance the different volume levels of records to maximise the dynamics of the recording. Imagine in the 1980s that any tape recorder would have fixed recording levels!” This provides the means of feeding it directly into any recorder, bypassing a system entirely for an even more direct feed.

Heinz eventually calms down, but he fears that too many will be taken for a ride by the opportunist brands. Maybe so, and others might argue the more, the merrier, but then the mass market is another planet. Heinz has his hands full satisfying demand in our little world, but it’s food for thought: just because they’re backing vinyl again doesn’t mean that the one-time traitors should be supported.

On another note, a moment of silence for the passing of AJ Conti, founder of Basis Audio turntables. One of those who “kept the faith” during analogue’s quiet years, AJ was a dear friend, a fastidious engineer, a lateral thinker, and one of the most simpatico individuals I have ever known. I will never forget meeting AJ during Basis’s early days through Dan D’Agostino, a fellow New Englander. He always made visits to hi-fi shows that much more rewarding, and he will be missed.