Remember that feeling, probably experienced as a teenager, when something you held to be privately yours suddenly became popular? Maybe it was a cool band you cherished that unexpectedly found cult status: say you were into Big Star before it was co-opted by critics and indie bands. Or maybe you were an avid fan of a lesser Marvel hero before the school dickhead got into it. You felt violated.

It’s a common enough reaction, but perhaps you also asked yourself: why keep something so wonderful a secret? For example, it was always my wish that Peter S. Beagle was the most financially well-rewarded fantasy author, that the Left Banke never split up, and that everyone rated Big Night as one of the greatest films of all time. I’d be overjoyed! Sometimes, though, cult stays cult. Other times, it’s taken away from you.

Why this preamble? After last month’s revelation that firms as big as and as far removed from music and hi-fi as Swarovski have co-opted vinyl as a motif, my antennae started twitching. I started seeing turntables everywhere -- and by that, I mean everywhere irrelevant to a turntable’s actual raison d’être.

TV ads in the UK are now peppered with record decks. Take Watchfinder, believed to be the world’s largest online-or-otherwise dealer in pre-owned watches -- and I mean with a value of eight figures. Look ’em up to see how slick second-hand sales can be. You want a Rolex but can’t quite stretch? Then how about a two-year-old example, with a 15 percent savings and a full warranty? It’s that sort of an operation, and they are shifting Rolexes, Omegas, Breitlings, and the like in the thousands. 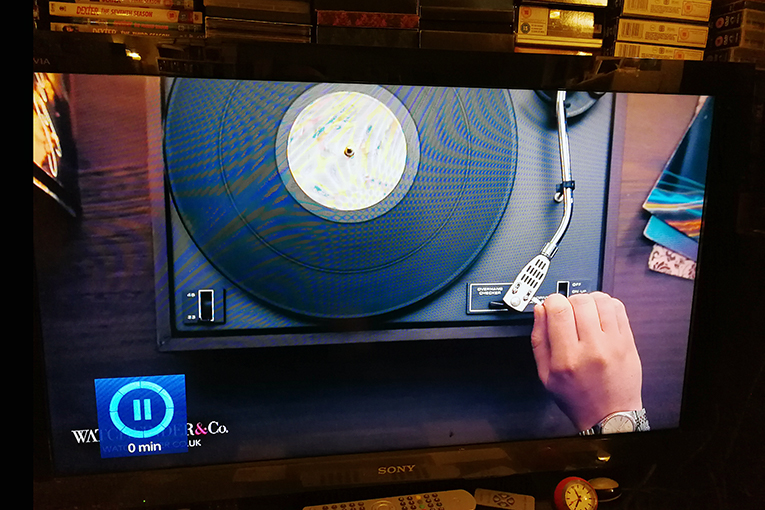 They now advertise on TV in the UK, with a classy commercial clearly aimed at the kind of guy who owns a BMW, Lexus, or Audi; wears Ralph Lauren or Boss; and appreciates fine timepieces. To set the scene -- and every view is first person, looking down on a desk or table -- each features the hand with the watch performing some metropolitan sophisticate’s task, the watches changing with the scenes.

And, bam! There it is! A mint Pioneer PL12D -- God knows where they found one in such pristine condition. The hand reaches in, picks up the tonearm, and places it over the LP. Alas, the jig is up, and one soon realises that whoever shot the video didn’t quite “get” vinyl, because the hand is cueing the arm over to the lead-out groove -- doh! But the message remains clear: vinyl is cool. Now the watch guys know it.

So I open a newspaper, and what do I see? An ad for the Yorkshire Building Society. This is the UK equivalent of what Americans call credit unions: banks for people who hate normal banks. The text is priceless and apropos, so here it is in its entirety: 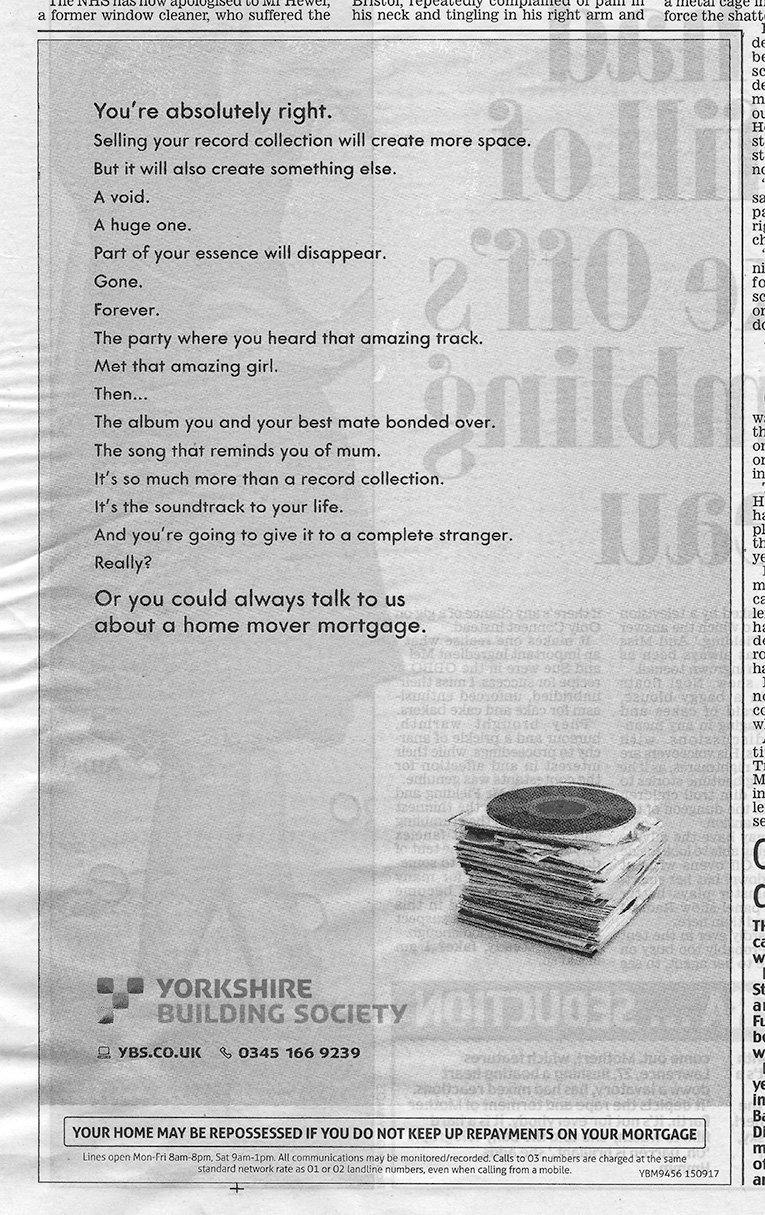 Yes, it’s a bit sexist, as if only men take out mortgages. It’s corny and twee and undeniably schmaltzy. But, hey, I’m an audiophile with a big vinyl collection, so if I were looking for a mortgage, it would be talking to me. More to the point, it’s taking a dull but necessary topic -- buying a home -- and rendering it somehow human.

Painfully, the cruel irony was not lost on me, as I just sold around 1000 LPs to help pay off my frikkin’ mortgage. So the ad was around 35 years too late for my needs, but that’s by the by: it’s a kinda-hip communiqué from a financial concern which knows, or hopes, that its typical customer is a thirty- or fortysomething into vinyl, ideally with a touch of cool.

Forget the cloying sentiments, the nausea-inducing exploitation of nostalgia. This ad is intended to appeal to a certain demographic now identified by an appreciation for the return of the LP. And it must be sizeable, or at least growing, or the motif would not be used. As insane as that sounds, there can be no other explanation. Same for the reasoning behind a turntable’s appearance in the Watchfinder clip.

These are but two examples of how the vinyl revival has entered the mainstream. It goes beyond the remaining record and hi-fi stores that enabled it and made it accessible. Stores that hadn’t touched vinyl in decades and hi-fi (or general consumer electronics) emporia that hadn’t sold turntables since the previous century found a nice little sales boost, from a most unusual crossover. If this were 1968, it would be the appearance of bell-bottomed trousers from mainstream fashion brands.

What this use of the LP signals, though, either as a design motif or as shorthand for the hip and the happening, is not a secure future for vinyl but merely a rare nod to our netherworld. We should be grateful because that’s what high-end audio has become, but never forget that this co-opting of turntables and LPs by what used to be called Madison Avenue has nothing to do with the real reason LPs are back: the format returned from the dead because analog sounds better than digital.

I should be jumping for joy every time someone under 30 sees a turntable in an unconnected milieu and asks “What is that? It’s so cool!” But this is “cultural appropriation,” even if it’s not race-, religion-, or nationality-based. It’s not quite on the emotional level of some snowflake at some university bitching about Taco Bell ripping off Mexico, but it is exactly like the teenager who suddenly finds his favourite obscure indie band on MTV.

Curiously, this newfound omnipresence of LPs and record decks had a completely different effect on me: it made me wish that the world of audio had a Web-based business that does for second-hand high-end audio gear what Watchfinder does for watches. But that’s another column’s topic.