Upon leaving CES, my farewell from the SoundStage! editors was an invitation to make my next column a post-mortem, with five faves and five catastrophes. As I write this, a week has passed since CES ended, which is a point somewhere between memories being fresh and clarity having sorted out what I saw. My only response is that it was the dullest, most uninspiring CES I've ever attended. Indeed, the most memorable demonstration was of a technology rather than a product per se. 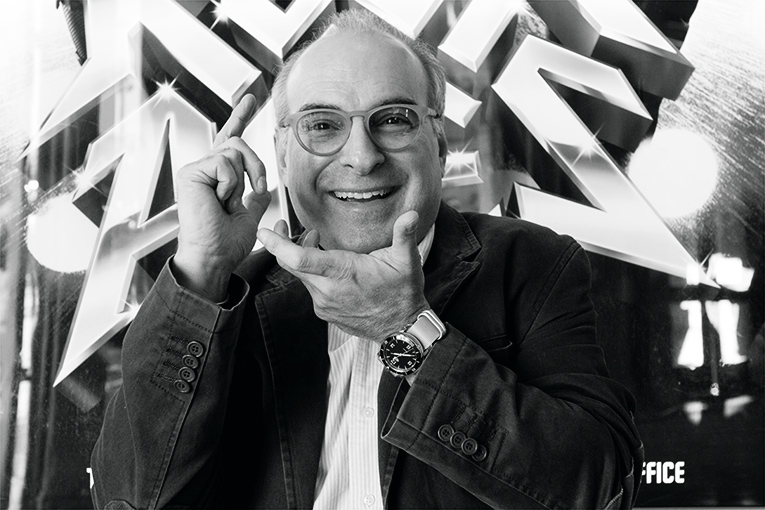 Let me explain: I spend my CES trips at the high-end audio venue. I do not care to look at smart watches or talking refrigerators. Aside from discovering the new under-$1000 Audeze EL-8 headphones at the Las Vegas Convention Center and running into an old friend, my sojourn to the "zoo" was a waste of a morning. I care not about health monitors or cars that tell the authorities my every move.

Having taken over 500 images and returned with a small sack of brochures, I was reassured of my pessimism upon realising that the coolest products were either not officially on show, or were pre-pre-production prototypes. One of the most exciting new amps in Las Vegas -- a powerhouse from Nagra -- was so early in its gestation period that the prototype on demonstration was a cube of plain sheet metal folded over to form a chassis. Oh, and it was at the Mirage, making it unofficial. 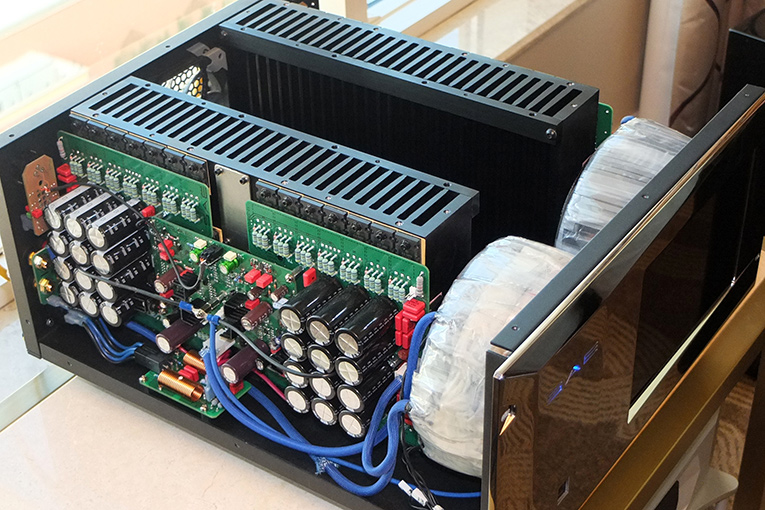 Another stunner, from the revived SAE, was only shown privately and thus was not officially at the event. It bore a gorgeous front panel, which cost so much to produce that it will not appear on the finished model. I did, however, finally get to meet my namesake: SAE's legendary founder, Morris Kessler. No relation, but it was cool to pretend he's a long-lost uncle or something. 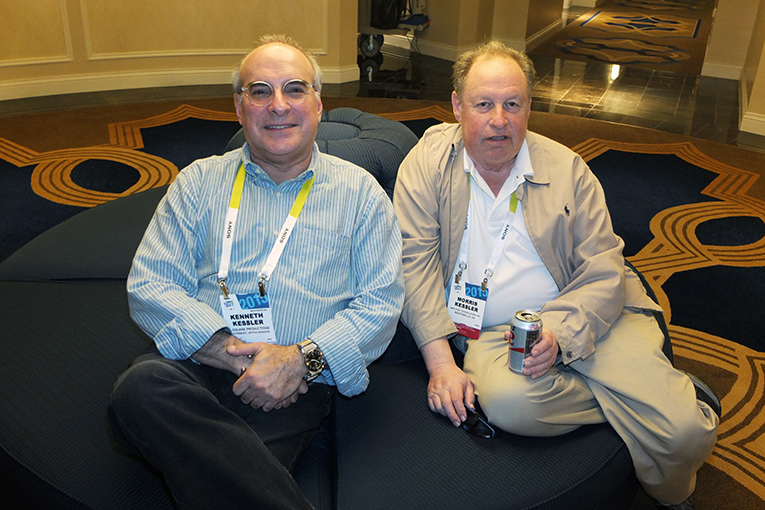 Among the talked-about speakers was the Wilson WAMM, also not official, as Wilson Audio, too, was in the Mirage. On display was a driverless sneak preview to give an impression of what is in store for those who remember its radical forebear. Photos were proscribed, but I can tell you that it resembles a much taller XLF, with two or three more adjustable modules added to the upper structure, and looks nothing at all like the original WAMM.

This preview rather overshadowed its new entry-level, one-piece floorstander, Sabrina, which comes in below Sophia 3. Amusingly, Sabrina is the prettiest speaker the company has ever produced! 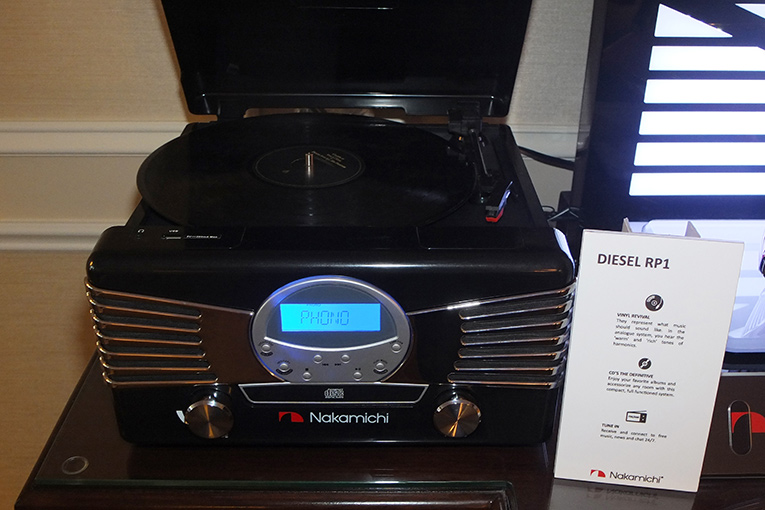 From the sublime to the ridiculous: I saw, for the first time in years, the Nakamichi name. This was the pinnacle of cassette playback, and its other hardware was pretty fine. I couldn't wait to see what the new Nakamichi produced. I was told "No photos" and quickly learned why: that hallowed name has been applied to plastic ca-ca. Imagine if someone revived the name Isotta Fraschini or Delage and put it on a skateboard. I'm still shuddering. 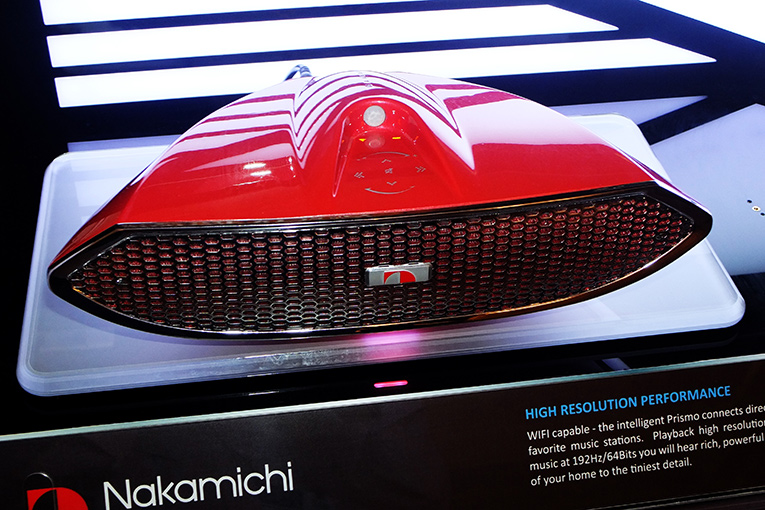 Rather than a straight piece of hardware, what rocked my world was a tip from David Chesky that ended up revising everything I thought I knew about binaural playback, 3D sound, and other dimensional concerns. Dave told me, after the annual press breakfast, that I absolutely, positively had to undergo the demonstration of Professor Edgar Y. Choueiri's "BACCH 3D Sound" setup.

Previously called "Pure Stereo 3D Audio," it is the creation of Choueiri, who is the director of the Engineering Physics program at Princeton University. It is his means of reproducing true 3D sound from two speakers, from any stereo recording. You are advised to visit the Princeton website and download the PDF, because there is far too much to sum up here. What I will tell you is the following. 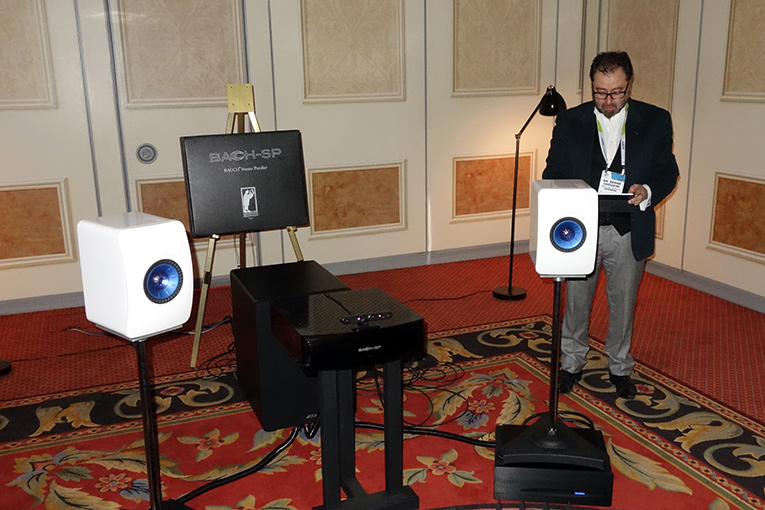 Fellow scribe Theo Wubbolts, from Holland, and I entered the Professor's large, empty demo room. In the middle was a lone chair, the focus of a pair of KEF LS50s astride two amplifiers. Between them was a box bearing the name BACCH. The professor had the listener sit in the hot seat and insert a pair of earbuds. He then fed three sweeps with the listener looking straight ahead, and leaning left and right.

In essence, the processor was measuring the shape of one's head and ears and calculating what sound reached either. Theo's "EQ curve" and mine differed enough to confirm that 1) no two people hear things in the same way, and 2) all reviews are even more subjective than we care to believe. The curves were stored, so it was possible to listen to the playback optimised for someone else.

(Before you dismiss anything ever written as a review, note that the differences are subtle. I switched from mine to Theo's settings and back, and -- while the changes were as audible as, say, absolute polarity -- the findings did not constitute a revision of everything one has ever heard.)

Choueiri's device -- at present a $50,000 processor, but he's working on a less costly app -- is a dedicated high-resolution device that "applies, in real time, an individualized digital filter to any stereo sound input. The processor filters out a fundamental impurity that occurs whenever stereo sound is played." That element is crosstalk, or leakage from ear to ear.

Fully compatible with all existing stereo recordings, the processor can be added to any existing two-channel system. Its digital filter also "corrects, in both the frequency and time domains, most non-idealities in the playback chain (including loudspeaker coloration and resonances, listening room modes, spatial comb filtering, balance differences between channels, etc.)." 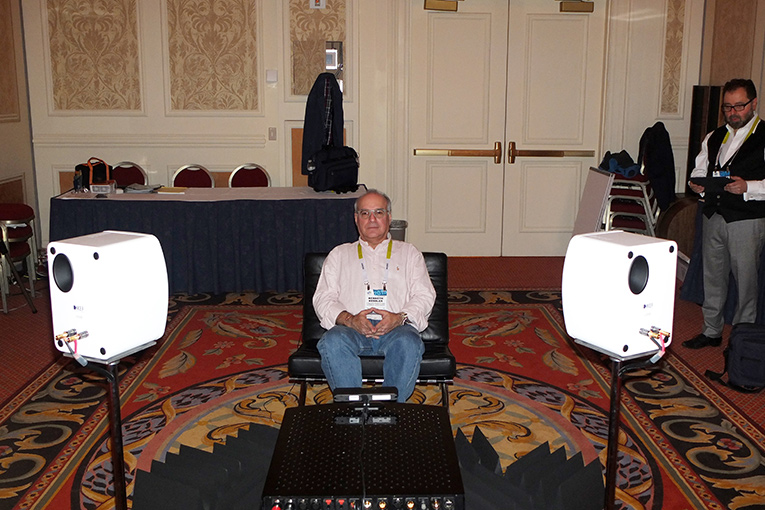 Let's establish one thing right from the outset: this is not about surround sound but about a truly three-dimensional soundstage, primarily in front of the listener but extending to and curling around the sides. The initial burst was nothing short of revelatory, the speakers truly disappearing to a point where it was impossible to localise them. I heard a trombone 6' to the left of the left-hand speaker. Voices from a crowd reciting numbers could be pinpointed and located to the inch, outside of the triangle formed by hot seat and speakers.

Sound quality did not suffer one iota: this was all about reproducing an authentic soundfield, which it achieved in spades. But the most impressive (in some ways) demonstration from the good professor came as we were leaving. He produced a Jawbone Mini Jambox, the same one you can buy for $119. (And which is on offer this very minute for £69 on amazon.co.uk)

"If you buy one and download LiveAudio from their website*, you'll hear this." He held it up in front of Theo and me. The sound extended to either side of the 6"-wide device by a good 12" to 15". I was so blown away that I ordered one that night from Amazon, and it was waiting for me when I got back to the UK. I downloaded LiveAudio -- which Choueiri developed -- and within minutes, I was hearing a pocket-sized portable with nearly the scale of hi-fi separates. And with a reasonable element of 3D spatiality.

If you just can't wait to find out if I'm simply imagining stuff, visit the Jambox site and check out the Professor's video clip. For my money, he's the Man of the Year.