LP Redux: The State Of Play

A tip of the hat to American sociologist Robert K. Merton, the man credited with the phrase “unanticipated consequences,” which has joined “perfect storm” for its usefulness and conciseness in describing a set of conditions. More often heard today as “unintended,” it describes precisely the unexpected effects of an action, originally applied to economics and social programs. True to its meaning, I certainly never expected to use it in relation to the vinyl revolution.

Everything about the revival should have been predictable: upswings in LP sales, the re-opening of dormant record departments and the emergence of new pop-ups selling LPs, an increase in “wry” magazine coverage in the mainstream (usually taking the piss out of audiophiles), increases in turntable sales, and back orders due to the dearth of pressing plants. For me, the only questions remaining would be 1) the true scale of the revival and 2) how long it would last, both of which cannot be answered yet, as vinyl is still on its ascent. 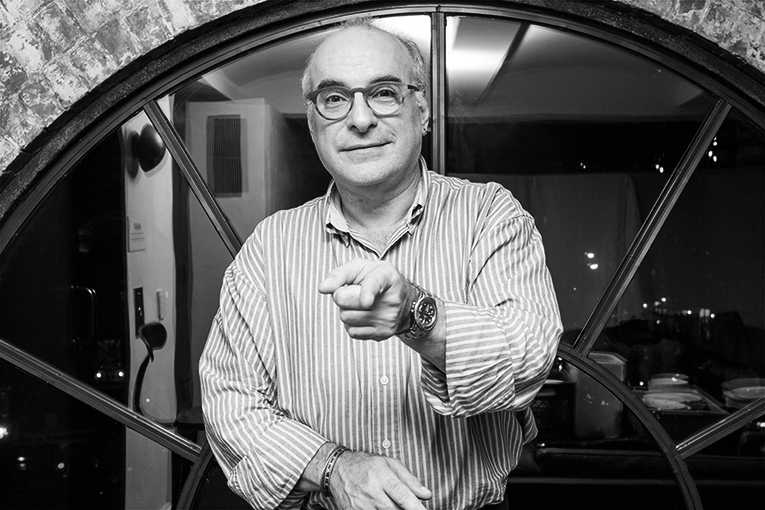 A far lesser question for me was “who is buying LPs in 2016?” because we already knew the answer. The “new vinyl demographic” or “NVD” (© Ken Kessler 2016) included audiophiles who never stopped buying vinyl, hipsters who will embrace anything retro (including, God forbid, so-called “safety razors” with lethal blades, but then, hipsters don’t have much to shave), and -- inevitably -- young people who never even saw an LP, whose curiosity was fired by performers as disparate as Kanye West and Coldplay.

It was the latter element of the demographic -- the younger component without previous experience of LPs -- that threw up this month’s “unintended consequence”: reports in most of the British media, from the BBC to the Daily Mail, about the non-playing of records, the Mail having an item titled, “LP Sales Soar -- But Half Are Never Played.”

Y’think? I have at least 2500 to 3000 LPs that I’ve never played, in boxes in every room, but only because I need at least four hours of sleep every night. I have no idea how much time I have left on this planet, but I suspect that I will not get to hear them all, nor read the few thousand crime novels piling up in the lounge, drive the length of Route 66 in a Studebaker Avanti, nor drink a 1985 Sassicaia.

This non-play anomaly, however, doesn’t target those of us “with eyes bigger than their stomachs,” as my mother used to describe greed or acquisitiveness relating to food. In this case, it’s “eyes bigger than their ears”: audiophiles buy LPs, or even CDs, with abandon limited only by disposable income. They are ever optimistic that they will disprove SME founder Alastair Robertson-Aikman’s observation that most collectors will never live to hear their LP libraries one more time in their entirety, in their all too brief lives. 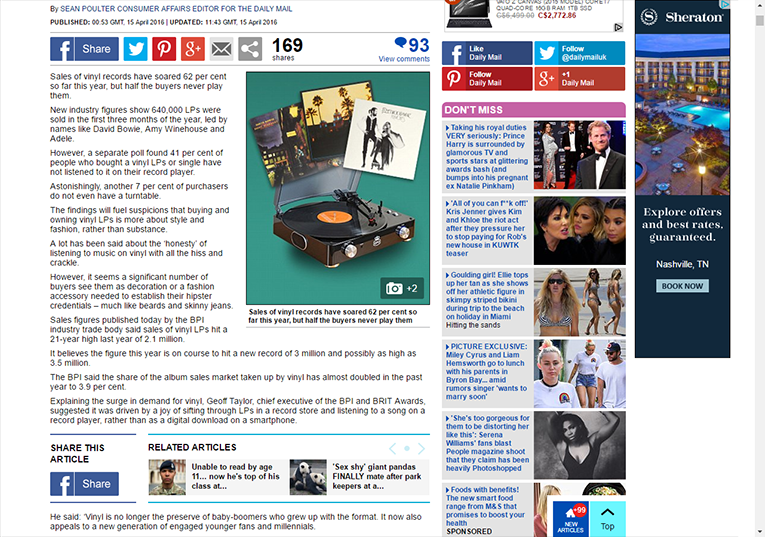 Wrote the Mail, noting that the LP is now “a fashionable accessory,” said hipness has resulted in UK sales increasing by 62 percent this year. The shocker was that “almost half of buyers admit they never play them -- with some not even owning a turntable.” Oh, dear. Surely this doesn’t bode well for the reply to my second unanswered question: how long will the revival last?

It is generally accepted in the UK that sales of LPs reached a 21-year high of 2.1 million units last year, according to figures published in April by record industry body, the British Phonographic Industry (BPI). At the current rate of increase, the sales for 2016 could reach as many as 3.5 million, based on sales of 640,000 LPs in the first quarter.

Also reported in the Mail, and concurring with the remarks of one Frank Merritt, of LP mastering studio The Carvery, in an interview on the BBC’s Newsnight on April 16, the BPI credits the sales increases to the “‘unique experience’ of shopping for and listening to vinyl, which cannot be matched by digital downloads.” Then the mystery begins.

Contradicting this optimistic, purist, wishful reasoning for the LP revival, pollsters ICM produced a slightly contradictory survey that found 41 percent of vinyl purchasers “just look at them, rather than playing them. Another seven percent do not even have a turntable on which to hear the songs.” Kinda like the celibate buying condoms, eh?

Talking to a friend whose teenage daughter asked for LPs for Christmas and her birthday, I learned that she didn’t ask for a record deck. She pores over the sleeves, hangs them on the wall, etc., but still listens to music via earbuds and her mobile phone.

Sadly for those who caught Mr. Merritt’s BBC moment, his nervous inarticulacy, the volume of Miles Davis’s Kind of Blue distracting the viewer, and the banality of the questions resulted in little new information. But, in trying to explain the embarrassing revelation that people are buying records but not playing them, Merritt did reveal his own mantra: “pride of ownership.”

I admit to grinning when he pointed out that everyone remembers their first LP. “Who remembers their first MP3?” he asked, satisfaction plastered all over his face. The interview then discussed sleeve dimensions and the way they welcome better artwork than a 5” x 5” box, the heft of the object, gatefold sleeves -- he stopped just short of saying that the latter provide invaluable help when rolling joints.

Ah, well, for those for whom the LP revival is a crusade, a raison d’être, any coverage is good. For Pro-Ject and Thorens and Rega and the rest, it’s a wake-up call to go out and sell more entry-level decks. For this cynic, it’s grounds for saying “I told you so” to the LP Pollyannas. But I won’t. I love vinyl too much.

By the way, for all us nerds, Merritt was using an SME 3009 on a Garrard 401. Which makes up for more “umms” and “y’knows” than I ever want to hear from someone on TV representing, even indirectly, the still-beleaguered world of hi-fi.