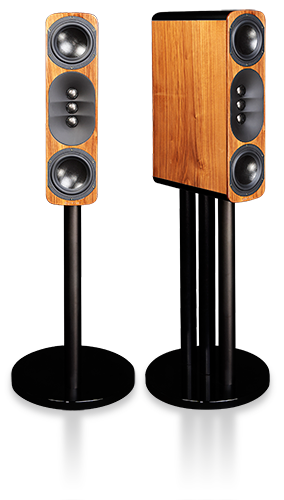 With two midrange-woofers, one above and one below a trio of tweeters nested in a single waveguide, Aurelia’s two-way, stand-mounted XO Cerica loudspeaker ($7100 USD per pair, including stands) is, visually and technically, unlike any other we’ve seen. It’s unique, and so is its sound.

According to Doug Schneider in his October 2013 review, “The stage was so shockingly holographic and specific in terms of width and depth that it completely changed my perception of how realistic an illusion of a soundstage could be reproduced by two loudspeakers. For example, Sade’s voice on her latest release, Soldier of Love (16-bit/44.1kHz FLAC, Epic), was more focused, tangible, and three-dimensional than through any other speakers I’ve heard in my room, at any price. In ‘Long Hard Road,’ in particular, her voice seemed to emanate from a bulbous point in space that I swear I could see.”

Doug rated the XO Cerica’s transparency and resolution just as high: “The XO Cericas’ transparency -- my ability to hear into a recording with them, with no sense of veiling or obscurity -- ranked so high that I was immediately reminded of Vivid Audio’s Giya G2s, which cost $50,000/pair and are not only the most transparent speakers I’ve heard, but also the best-sounding overall. I was also bowled over by the Cericas’ presentation of the smallest spatial cues -- these cues were startlingly easy to hear, which made depth easier to discern than through my reference Revel Ultima Salon2s ($21,998/pair). In turn, that high resolution made older recordings sound as if they’d been remastered.”

Where the XO Cerica faltered a bit was in the deep bass -- its two 5.5” midrange-woofers could go down to only about 40Hz. That’s more than respectable for a cabinet measuring only 21.3”H x 5.7”W x 13.7”D, particularly as Doug found that the bass the Aurelia did reproduce was punchy and tight. Still, much larger, true full-range speakers, such as the Giya G2 and the Revel Salon2, can get closer to 20Hz.

Another limitation of the Aurelias was their narrow vertical listening window, no doubt a result of the line-source behavior of the three tweeters and two midrange-woofers -- this window was basically framed by the distance between the centers of the two midrange-woofers: about 16”. When Doug’s ears were within that sweet spot, the Cericas sounded amazing -- but above or below that, they sounded incredibly dull. That’s why Doug described the Cerica as “a sit-down-and-listen speaker.” 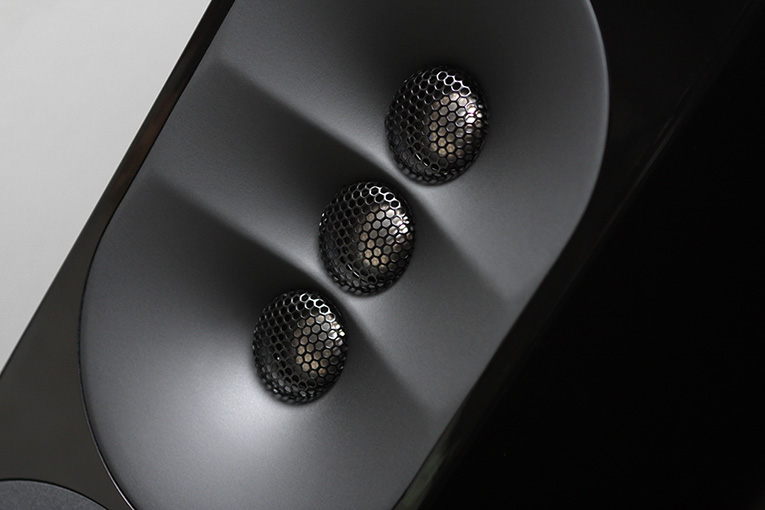 The XO Cerica counters those limitations with broad, even horizontal dispersion, a neutral tonal balance overall, and lively highs. Those highs were a little too lively, Doug thought, when the Cericas’ rear-mounted Presence switches were set to Hi, but were just right at the Lo position. The Cerica’s clarity throughout the audioband was also outstanding, as was its ability to play quietly while still sounding transparent and detailed, and to play very loudly without strain, particularly from the upper bass through the midrange and highs. Doug: “The Cerica’s mids and highs sounded even more controlled than the bass at very high volume levels, which likely has to do with the tweeters’ load sharing, the waveguide aiding them, and the composure of the midrange-woofers once they’re out of the deep-bass range. . . . In contrast, KEF’s LS50, Paradigm’s Reference Inspiration, and Grand Cru’s Essentiel could all play pretty loud -- just not as loudly or as effortlessly as the Cerica.”

The Aurelia XO Cerica’s across-the-board neutrality, high resolution, superb transparency, effortlessness at all volume levels from low to high, and ability to cast an expansive soundstage with extraordinary image specificity, combine to make it a loudspeaker of exceptional accuracy and precision. They more than justify the speaker’s price, and earn it a place in our list of Recommended Reference Components. As Doug said toward the end of his review, “It demands to be heard.”