Devialet, based in France, has shaken up the hi-fi world like no other company in recent memory. Their first product, the D-Premier integrated amplifier-DAC ($15,995 USD), which debuted in 2009, packed into its flat, shiny case Devialet’s newly developed, patented Analog Digital Hybrid (ADH) technology, which marries class-A and class-D amplifier topologies in a way never done before; a digital-to-analog converter; and a digital preamplifier, replete with a high-powered DSP engine that permitted customization of its features and sound.

In terms of its technology, features, and appearance, the D-Premier was so different from anything else on the market that it should have been a tough sell to audiophiles, who, notoriously, tend to resist change. Yet it received worldwide acclaim from the hi-fi press, and Devialet gained enthusiastic customers worldwide. In short, the D-Premier was a smashing success. Doug Schneider reviewed the D-Premier for this site in May 2011, at which time it received our Reviewers’ Choice award; the following month it won our Recommended Reference Component award, and at the end of that year was named a Product of the Year. 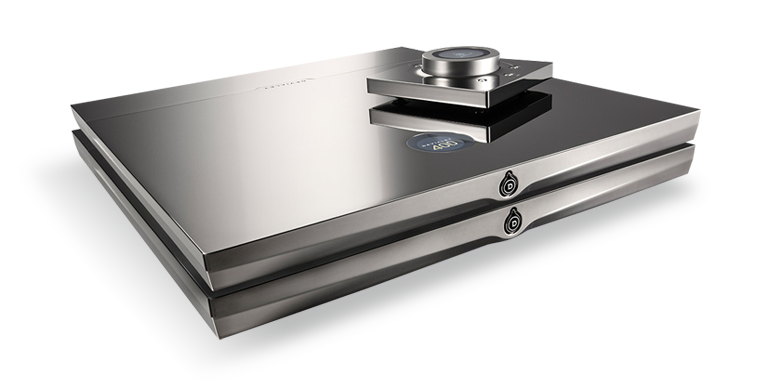 Devialet discontinued the D-Premier in 2013, and followed it up with models that built on the groundwork of that original design while adding even more features and improved sound. Devialet’s current line includes the 120 ($6495), 200 ($9995), 400 ($17,495), and 800 ($29,995) -- each model name reflects that product’s power output into 6 ohms. All models include Devialet’s Asynchronous Intelligente Route (AIR), for wireless music streaming; and Speaker Active Matching (SAM), to extend and optimize the bass performance of the speakers included in Devialet’s online SAM database -- which, at the time of writing, included more than 200 models. AIR was available for the D-Premier a couple of years after its launch, but that model never included SAM.

In May 2014, for SoundStage! Access, Hans Wetzel reviewed the Devialet 120 -- it, too, received Reviewers’ Choice and Recommended Reference Component awards. Last month, S. Andrea Sundaram reviewed the 120 for this site as part of Devialet’s Ensemble system ($9995), which also includes a pair of Atohm GT1 SE speakers and the speaker cables -- and which also won a Reviewers’ Choice award. In December 2014, for SoundStage! Ultra, Jeff Fritz reviewed the Devialet 400, which won Reviewers’ Choice and 2014 Product of the Year awards -- and is now being recognized with a Recommended Reference Component award.

Devialet’s 400 actually comprises two 200s, each configured for mono operation using the online Configurator -- the buyer on a budget can begin with a single 200, and later add a second 200 to create a 400. The benefits of reconfiguring two 200s for mono aren’t only higher power output and physical separation of each channel’s amplifier and DAC sections (which is why we refer to the 400 as integrated amplifier-DACs), to optimize channel separation; Devialet claims that mono operation also markedly lowers the total harmonic distortion and intermodulation distortion: both are less than 0.00025% for the 400, vs. less than 0.001% for the 200. (Devialet’s 800, also mono based, boasts higher power output, but its distortion specifications are the same as the 400’s.)

Devialet’s advanced technologies have once again proven successful. Jeff Fritz described the 400 monos in his review as being “as tonally neutral as the best,” regardless of price, their control of the speakers being superior to anything he’d heard: “The 400s controlled the woofers in my speakers to a degree that improved those speakers’ bass response beyond what I’d thought them capable of. This meant that, from the highest highs through the lowest lows, the character of the sound remained more consistent. Here’s what I believe was happening: We’re used to hearing a gradual loss of control the lower in frequency the music goes, something that can be especially evident when listening through large, full-range speakers to music with heavy low-bass content. Down low with such recordings, most amps’ grip on the woofers loosens ever so slightly. But the Devialet 400s seemed to control my speakers’ woofers as easily as they did the tweeters.”

Other areas in which Jeff noticed that the 400 monos bettered all other amplifiers he’d heard were their inherent quietness and resolution, evidenced by their imperceptible noise floor and the way music emerged from the darkest sonic backgrounds: “The Devialet 400s were the quietest amplifiers ever. They just didn’t make any noise. While it’s true that I heard virtually nothing from the tweeters of my speakers when I fired up these amps -- and man, was that cool the first time I tested it -- it was what I didn’t hear at the listening seat that most impressed me. That quietness led to the most complete retrieval of detail I’ve ever heard from my system. I could simply hear deeper into the music -- more information, both spatial and musical, reached my brain than did from other amplifiers.”

Like most reviewers who’ve listened to Devialet amplifiers, Jeff wasn’t merely impressed by what he heard from the company’s 400 monos -- he was completely taken aback. From the penultimate paragraph of his review: “quietness, control, and lack of character, regardless of output level -- they set the benchmarks.” He concluded: “If you’re like me, once you hear the Devialet 400, there will be no going back. I’m as surprised as you that I’m saying this, but the Devialet 400s produced the best sound I’ve ever heard.”

The Devialet 400 is another outstanding product -- and yet another Recommended Reference Component -- from this amazing company.