“Those are really nice speakers -- can we keep them there?”

Those are words seldom uttered by my wife when new speakers enter our home. But that’s what she said when she laid eyes on the pair of Q Acoustics 3020i minimonitors ($299.99 USD/pair) that had replaced the Paradigm Monitor SE Atoms ($298/pair) on the shelving unit in our living room that holds my “System One” components. 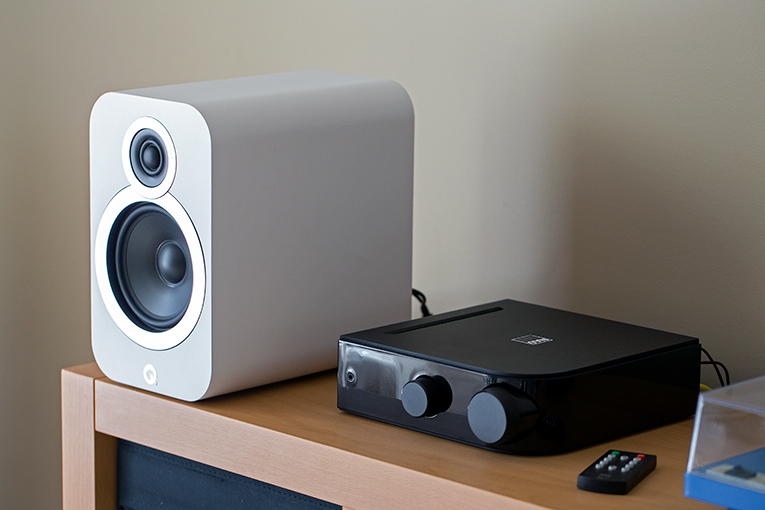 Her admiration had a little to do with the nicely rounded curves where these speakers’ side panels meet their top and bottom panels -- they’re softer and more elegant than the squared-off edges of most box speakers -- as well as their size: only 10.9”H x 6.7”W x 11.1”D. But it had mostly to do with their Arctic White finish. It’s not a lavish finish -- it feels like that low-cost kitchen-countertop material -- but it seems durable as hell and looks really good, particularly in how it complements the shiny metal rings surrounding the drivers.

The 3020i’s big brother, the floorstanding 3050i ($799.99/pair), hadn’t gotten nearly as warm a welcome. When the 3050i’s had arrived a few days earlier, I’d set them up on either side of the shelving unit. When my wife got home, she said, “How long are those going to be there?” If you’re a cup-half-full person, you might pay attention only to the words and take them to mean that she hoped the 3050i’s would be here a long time. But her emphasis and tone of voice told me that she was hoping their visit would be brief. 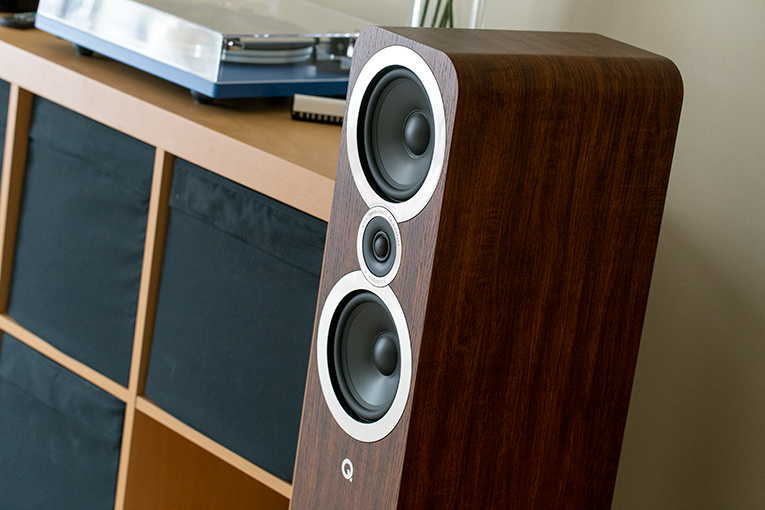 If you’re not aware of Q Acoustics, I doubt they’d be surprised. Q is a relatively new hi-fi brand, established in the UK in 2006, and on their website they seem proud to be one of the newer kids on the loudspeaker block: “Q Acoustics is a young brand. No heritage. No tradition. No old black and white photographs. We believe that to be the secret of our success.” By which they mean, I guess, that they feel freer than most to live by their own rules. While Q’s flagship speaker, the Concept 500 floorstander, retails for $5999.99/pair, most of their speakers -- including every model in the 3000i line, their newest -- cost less than $1000/pair.

I came to possess pairs of two new Q models because my house is sort of a gathering place for components reviewed by our other writers -- I do a lot of the product photography, and coordinate all the speaker measurements. The 3020i’s were sent here by Roger Kanno, who lives in Vancouver, Canada, and the 3050i’s by Hans Wetzel, based in Philadelphia, Pennsylvania. Their reviews have already been written and submitted (though I have yet to read them), and will be published on SoundStage! Access as soon as the speakers have been measured. But while the Qs were here to be photographed before being sent on to Canada’s National Research Council to be measured, I wanted to listen to them -- their prices make them ideal subjects for this column. To drive them, I used NAD’s D 3045 integrated amplifier-DAC, which I wrote about last month; its output of 60Wpc provided more than enough power.

I began my listening with the floorstanding 3050i, the first Q Acoustics model to arrive here. Right off the bat, I was impressed with its very full, superbly smooth sound. Compared to the speakers preceding them in my system, the little Monitor SE Atoms, the 3050i’s’ sound was a lot grander and room-filling. For example, the piano throughout St. Vincent’s MassEducation (16-bit/44.1kHz FLAC, Loma Vista/Tidal) not only sounded weightier in the bass, it energized the entire room more, making for a richer, more enveloping sound -- these big speakers sounded big. St. Vincent’s voice, too, had a smoothness that I associate with much more expensive speakers. It was pretty obvious to me, with this track and others, that there was a seamlessness of transition between the outputs of the midrange-woofers and the tweeter; throughout the audioband, the 3050i’s sounded coherent -- i.e., per my dictionary, their sound was “logically or aesthetically consistent.” 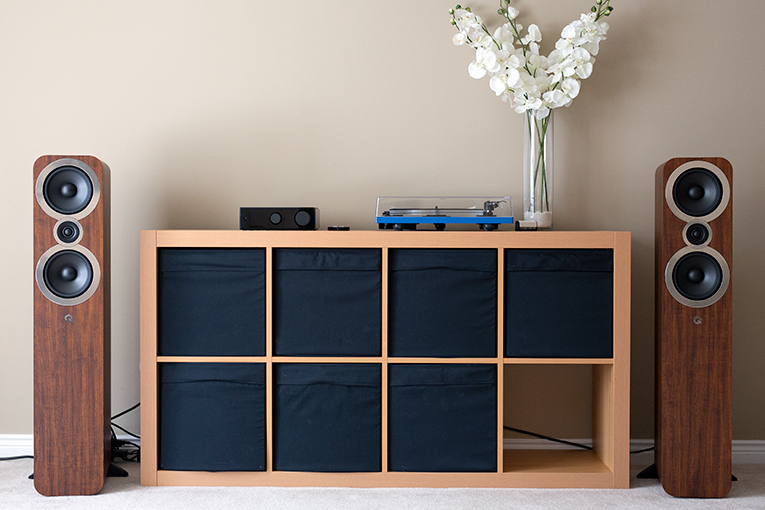 That bloom in the low end was a real blessing when I played an original pressing of Fleetwood Mac’s Rumours (1977 LP, Warner Bros. BSK 3010) on the Orbit Plus turntable from U-Turn Audio that’s part of this system. “Dreams,” in particular, was reproduced spectacularly well -- Mick Fleetwood’s kick drum sounded round and weighty yet still ballsy enough, and Stevie Nicks’s voice was oh, so smooth. Just gorgeous. The same held true with Kate Bush’s Hounds of Love (1985 LP, EMI ST-17171). I have that album also on CD, but in that format it sounds thin, bass-light, and lifeless. The LP, at least through this system, sounded weighty on the bottom end, which I immediately noticed when I cued up track 1 of side 1, “Running Up That Hill (A Deal with God)” -- the drums thundered. And Bush’s voice, like Nicks’s, was superbly reproduced: supersmooth, with a hint of warmth that made it sound more human.

But when I played another album from back in the day, Dire Straits’ Making Movies (16/44.1 FLAC, Warner Bros./Tidal), from 1980, this time streamed digitally (I couldn’t find my LP), I noticed that at fairly loud volumes the 3050i’s had a bit of resonance from the midrange down -- the bass got a little woolly, the midrange congested and a tad coarse. I could hear this with a number of other albums as well; I suspect that at least part of the problem was the 3050i’s large, not-so-well-braced cabinet, which sounded hollow when I rapped it with a knuckle. While playing “Tunnel of Love,” I laid my hands on a 3050i’s side panels and could feel them resonating quite a bit. And having the speakers on a thickly carpeted floor probably didn’t help -- they didn’t sit as securely as they would have if placed directly on tile or wood -- they could never get a firm footing. Those are problems, but you can’t expect the world for $799.99/pair. 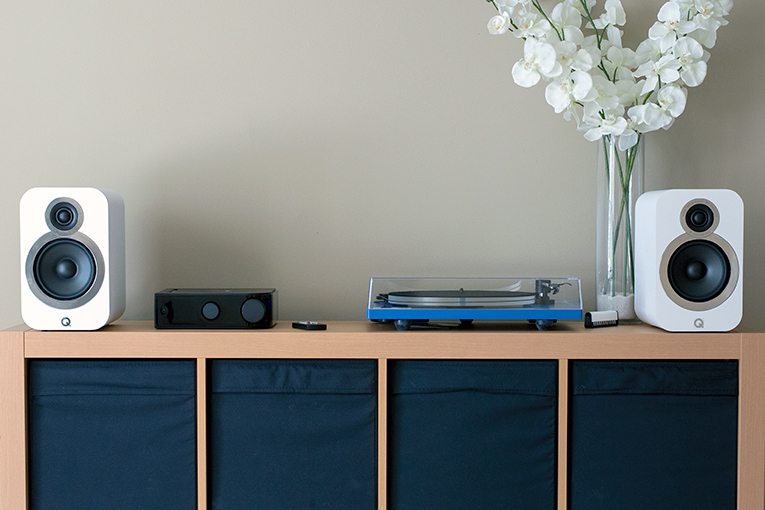 Swapping out the 3050i’s for the 3020i’s resulted in an expected loss of bass -- a single 5” midrange-woofer in a little cabinet is no match for two 6.5” midrange-woofers in a cabinet four times bigger -- but, like the Paradigm Monitor SE Atoms before them, the 3020i’s didn’t sound too light or thin. The 3050i’s had seemed to reach down to at least 40Hz in my room -- more than decent for a $799.99/pair speaker. The 3020i’s got down to only 60 or 70Hz, which is pretty good for a small speaker -- but they also did so with some force, sounding surprisingly visceral and dynamic. The 3020i’s’ bass wasn’t quite as deep as the SE Atoms’, which neared 50Hz in my room, but it was tighter -- which made the little Qs sound a bit more dynamic than the Paradigms. The same was true in comparison to the 3050i’s: the 3020i’s’ bass might not have gone nearly as deep as that of the floorstanding Qs, but it had more punch. Pick Withers’s kick drum in Dire Straits’ “Tunnel of Love” actually had more kick through the 3020i’s than through the 3050i’s, though the smaller speakers couldn’t produce the bigger speakers’ overall bass fullness and room envelopment. Furthermore, the 3020i’s didn’t seem to have the 3050i’s problem of panel resonances muddying the bass and midrange; if so, that must have helped give those drums greater solidity, and made Mark Knopfler’s voice sound clearer and a little more open. The 3020i’s lack of low-end heft didn’t serve Rumours as well -- Mac sounded smooth and clean, but the 3020i’s didn’t come close to charging up the room with an enveloping soundfield as the 3050i’s had. As always with loudspeakers, there were trade-offs either way.

The biggest surprise the 3020i’s had in store for me was in the treble. They didn’t sound bright, but they sounded brighter and more extended than the 3050i’s. As a result, voices popped to the fore far more than through the 3050i’s, instruments such as cymbals were much more apparent, and the increase in high-frequency detail made it a bit easier to hear precise positionings of aural images on the soundstage. At first, all of this took me aback -- after all, the same tweeter was used in both speakers. But after some playing around, I hit on what might have caused the difference I heard: that tweeter’s height. Typically, the ideal height for the tweeter of a speaker is 36” to 39” above the floor, which puts the tweeter at about ear level for most seated listeners. I measured 31” from the floor to the center of the 3050i’s’ tweeters -- that’s low. But from the little 3020i’s’ perches on the shelving unit, the centers of their tweeters were 40” above the floor -- a smidgen high, but closer to the ideal. They sounded it. More important, the absolute difference in tweeter heights in these setups was 9”, which is a lot. No wonder these two Q models sounded so different in the highs in the same room and system: the 3050i’s’ tweeters were firing into my chest, but the 3020i’s’ tweeters were aimed at the tops of my ears. 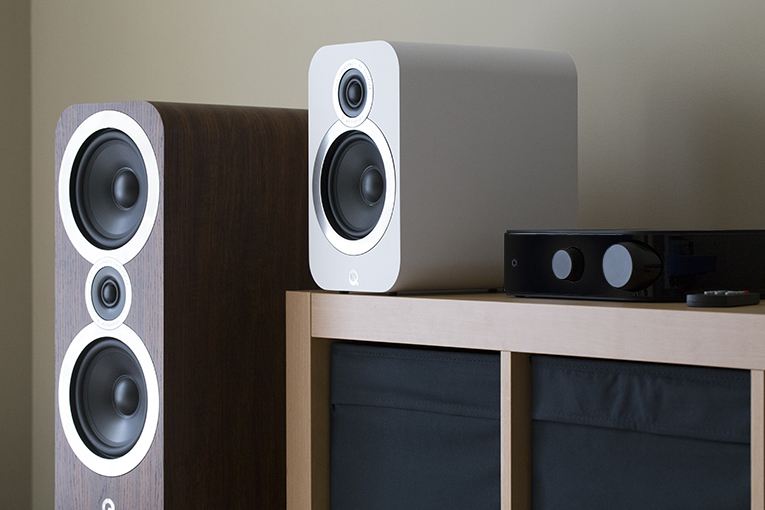 Sure enough, when I crouched low to listen to the 3050i’s to ensure that my ears were level with their tweeters, the treble came up noticeably. But that’s not a natural listening position for anyone but kids or those with very short torsos. I see two potential solutions for the 3050i’s: raise the speakers on small stands, say 8” or 9” high, which would be kind of weird -- these are supposed to be floorstanders. The other is to prop up the speakers’ fronts, maybe with longer spikes than Q provides, until the tweeters fire upward toward the ears rather than straight ahead. I’ll be interested to hear if Hans Wetzel had a similar problem with the 3050i’s -- and I wonder how high Roger Kanno placed the 3020i’s for his listening sessions.

Q Acoustics may be a young company with no tradition or old black-and-white photos, but their 3020i and 3050i prove that they’re right up with the best of the established brands in producing good-looking, high-performing, affordable loudspeakers. However, the leap from their 3020i to their 3050i model isn’t as clearly a step up in quality as it might be in many of those other companies’ lines.

Hands down, the 3020i is a winner. It’s wonderfully styled, looks beautiful in Artic White, and sounds superb -- dynamic, clean, smooth, open, extended on top, and with as much bass reach as you can expect from so small a speaker. For $299.99/pair, it’s as good a deal as Paradigm’s Monitor Atom SE at a nearly identical price.

My hands go down somewhat more cautiously for the 3050i. The $500 more for a pair does get you significantly more bass output than a pair of 3020i’s could ever dream of providing, with the result of a more enveloping and engrossing sound -- just what you’d expect when you pay more for the next higher model. The 3050i also sounds supersmooth across the audioband, and the outputs of its three drivers combine to sound as one. Things go a little off course with a resonant character that affects the midrange and bass, and with the low height of its tweeter -- the latter needs to be accommodated for in the ways mentioned above. But neither issue is a deal-breaker -- if you can get the 3050i’s set up exactly right, you’ll probably get fantastic, near-full-range sound for less than a grand. Still, it will take a bit of time and labor in setup to get them to sound their best.

I’ll be very interested to learn what Hans and Roger found out about these Q Acoustics models when I read their more detailed assessments on SoundStage! Access -- as should you, if you’re shopping for speakers for under $1000/pair.

Next month: Brand-new speakers from a legendary designer for only $199/pair.