Another February, another Tonbridge Audiojumble . . . but this time it was an eye-opener. According to the founder and father of the current organisers, John Howes, it’s the best attended yet, and none would dispute it. But why, all of a sudden, is the world’s finest hi-fi flea market enjoying a new audience? I kid you not: there were plenty of people in attendance who 1) weren’t over 40, and 2) didn’t have prostates or beards.

Perhaps the reasons are too obvious even to bother expounding, the most evident being the new blood attracted to the Audiojumble because of the vinyl LP revival. These are not future audiophiles who will become cable fetishists or lie awake at night worrying about VTA. Uh-uh. They just wanted turntables and vinyl. And that’s the biggest change that the regulars noted: the number of stallholders selling only vinyl has increased markedly to accommodate this new clientele. 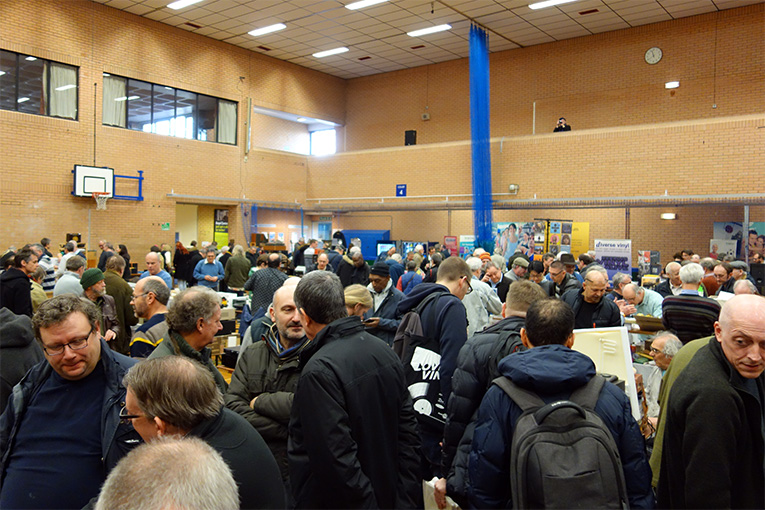 Record vendors ranged from those with table after table of used LPs to a couple of full-time traders, like Diverse Vinyl, that stock new, sealed items. All were doing roaring business, and it was refreshing to see under-30s buying Beatles albums. I had to force myself not to thumb through the racks, because I am trying to downsize. (Tell a lie: I found 11 pre-recorded open-reel tapes, my newest fetish.) 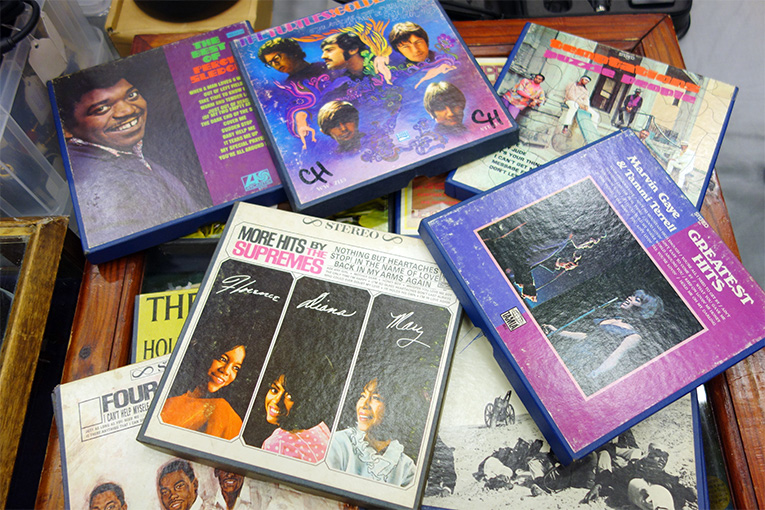 As for the actual turntable sales, one of the bigger stallholders arrived with a half-dozen or so, and they were all gone within an hour of the doors opening. From there, the visitors grabbed any cartridges, tonearms, phono stages, or step-up devices they could find. I saw Linn LP12s, Thorens TD 124s and TD 150s, a Fons CQ30, Yamaha and Garrard and Technics decks, all presenting bargains for both collectors and newcomers, the latter possibly too wise to subject their LPs to the sub-$99 plastic crap masquerading as turntables on certain mail-order sites.

Another reason the show was so well attended is the increasing use of social media, which hasn’t hurt. The second generation -- John’s children Richard, Michael, and Katherine -- have joined the family business, allowing dad to relax and tend to his collection of horn loudspeakers. Responding to the new era in vinyl and vintage buyers, they’ve set up a Twitter account, @The_Audiojumble, as well as a Facebook page, @AudiojumbleUK. 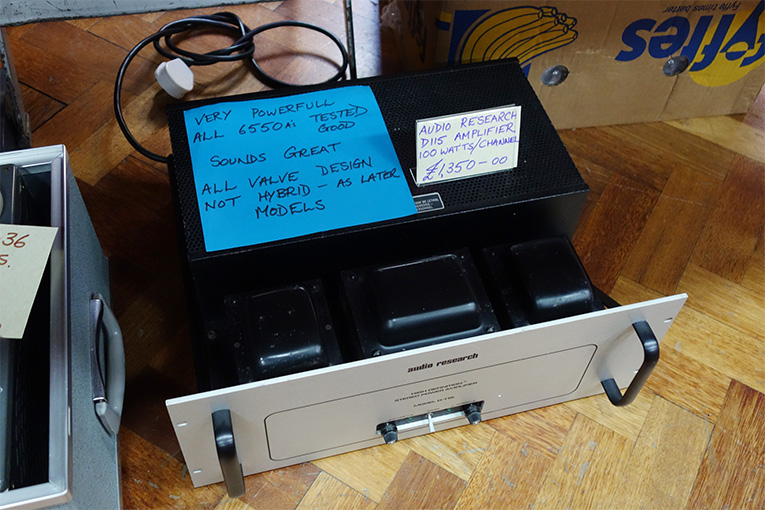 As for another trend -- and I am not about to suggest that there’s a “new austerity” because there’s still money in the UK -- there is a certain growth in the vintage hi-fi sector simply because it represents such amazing value. I saw a perfect Krell PAM-7 preamp for £750, and I was offered a trio of Crown amps -- D-75, D-150, and DC-300 -- for £550. £1350 would get you an Audio Research D115. Perfectly usable Japanese integrated amplifiers, ideal for a student’s accommodation or any starter system, were plentiful under £50, as were tuners and CD players. 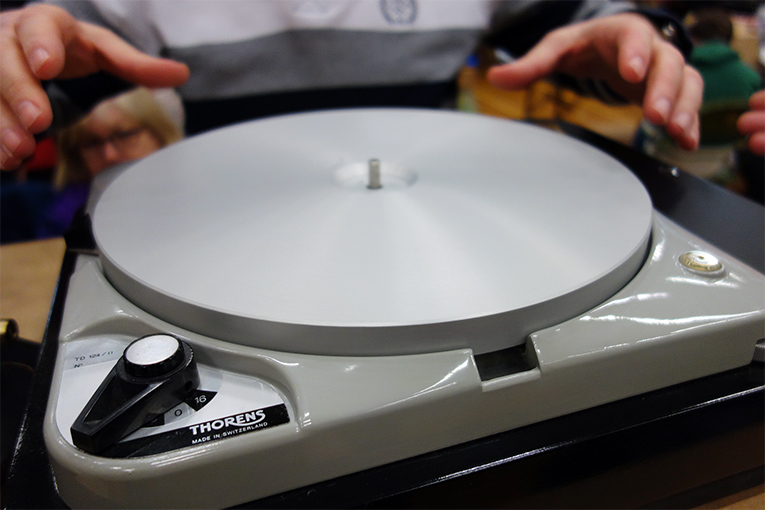 Mint Quad tube gear, a Dynaco PAS preamp needing knobs, a pair of Leak TL/12s, a unique Radford SC22 preamp, a guy offering superior custom-replacement upper platters for Thorens TD 124s, assorted aftermarket plinths -- I could go on and on, but you get the picture. This has become the go-to place for vintage hardware, and there were buyers from as far away as Japan, Italy, and Canada in attendance. 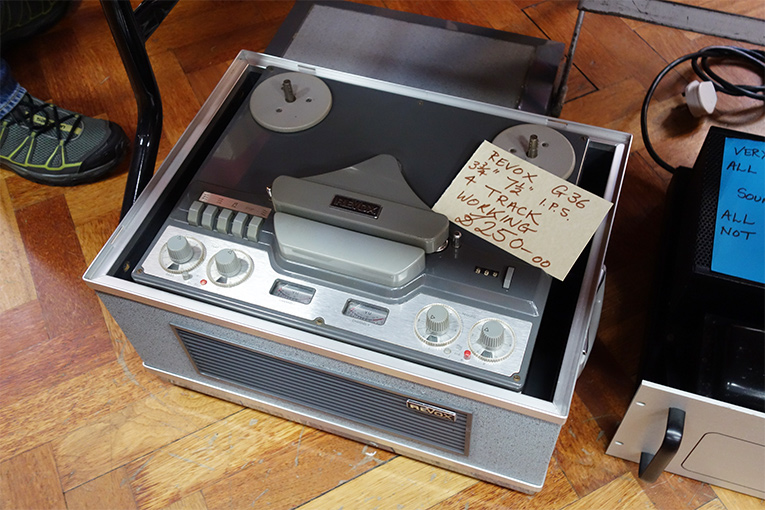 While the newcomers were welcomed with open arms, the show was full of familiar faces, including hardcore collectors and members of the trade shopping for stock to replenish their shelves. And the selection remained totally eclectic: in addition to every type of hi-fi separate, there were tables with gramophones, portables, tape supplies, tube radios, professional equipment, valves on their own, microphones, bits of test equipment -- honestly, it was almost too much to take in. I loved every minute of it. 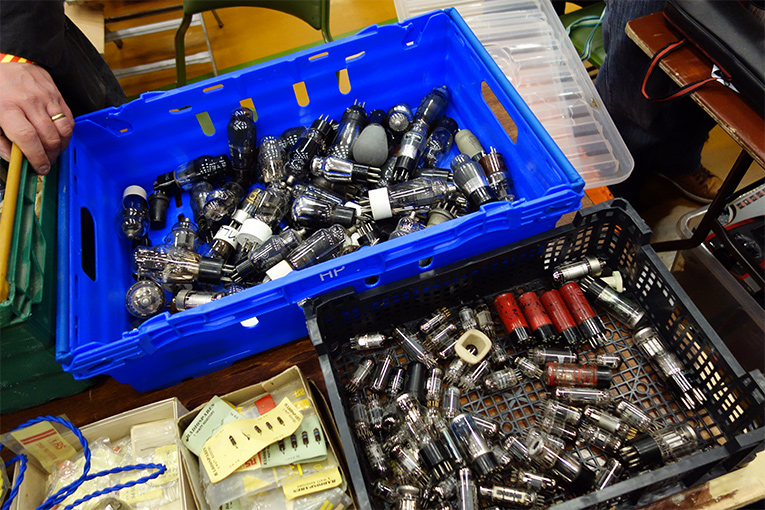 If you’re planning a trip to the UK in February or October, you could do worse than drop by the Audiojumble, even if you have no intention of schlepping a pair of LS3/5As or a Garrard 401 on-board your return flight. Visit www.audiojumble.co.uk and see why there isn’t a vintage hi-fi lover in southern England -- or farther afield -- who would miss this soul-restoring event.